After Row Over EWS Quota Appointment, UP Minister's Brother Resigns From Varsity Post

“Being the brother of a minister is a crime and being a Brahmin is a curse,” the minister's brother said, claiming that his appointment had been on the basis of merit. 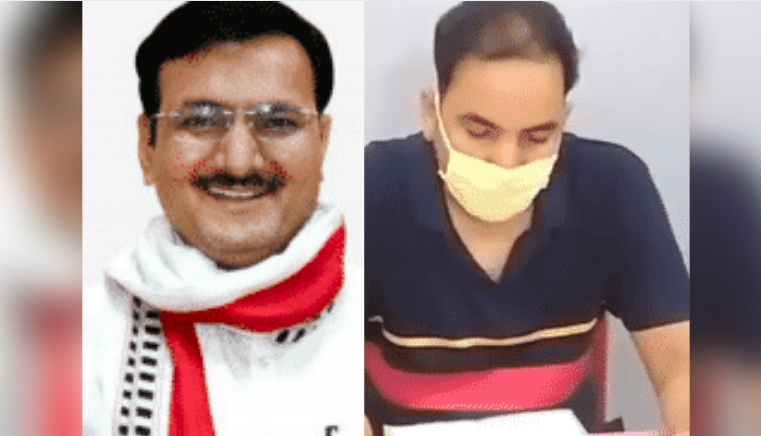 Lucknow: Amidst the controversy over his appointment as an assistant professor, Uttar Pradesh minister Satish Dwivedi’s brother Arun Kumar Dwivedi tendered his resignation on Wednesday, May 26.

Satish Dwivedi is Uttar Pradesh’s minister of state for basic education (independent charge), and his brother’s appointment as an assistant professor at Siddharth University Kapilvastu under the economically weaker section (EWS) quota on May 21 had sparked a row.

Arun Kumar called a press conference at Siddharth Nagar district headquarters to announce his decision. “Being the brother of a minister is a crime and being a Brahmin is a curse,” he claimed.

The vice-chancellor of Siddharth University, Professor Surendra Dubey, accepted Arun Kumar’s resignation with immediate effect in anticipation of the approval of the executive council.

The controversy does not appear poised to die down soon. Social activist Nutan Thakur has written a letter to Chief Minister Yogi Adityanath stating that despite his resignation, Arun Kumar’s EWS certification needs to be probed.

Arun Kumar, while announcing his resignation, said that he was appointed to the post of assistant professor in the Department of Psychology on May 21 on the basis of merit.

“I am a PhD holder, a gold medallist in MA, and have done my JRF and SRF from the Defence Institute of Psychological Research (DIPR), DRDO. I have published 17 research papers and edited a book as well. I was appointed to the post on the basis of my qualification as per the proper procedure, but it is my misfortune that soon after I joined, there has been an effort to tarnish the image of my elder brother (the state’s basic education minister) by linking my appointment to him in the media and social media. I cannot bear this.”

He mentioned that he resigned as he was under severe mental stress due to the controversy over the appointment.

“There’s nothing more important than the social and political honour of my brother and my family, not even this important post. And so, with full responsibility, I have given my resignation,” he added.

The appointment of Arun Kumar under the EWS quota became mired in controversy with many questions being raised about its authenticity. A complaint was made to the governor regarding his appointment and the governor also sought a reply from the vice-chancellor.

Since his appointment, opposition leaders had also been seeking a probe into the matter and demanding the resignation of the minister and punitive action against his brother.

Congress general secretary Priyanka Gandhi had also questioned the appointment and alleged that instead of helping common people in the present COVID-19 crisis, the ministers in the Uttar Pradesh government are busy grabbing every opportunity for personal gains.

IPS officer Amitabh Thakur, who was recently forced to retire from service, and his wife, activist and advocate, Dr. Nutan Thakur, wrote a letter to governor Anandiben Patel requesting a thorough and impartial inquiry into the EWS certificate obtained by Arun Kumar.

In the letter, Amitabh Thakur and Nutan Thakur stated that apart from being the brother of a minister, Arun Kumar was also working as an assistant professor in the Department of Psychology at Banasthali Vidyapeeth, Rajasthan, before being appointed at Siddharth University. As such, his EWS certification needs to be probed, the letter demanded.

In 2019, an advertisement was published for the appointment of 22 professors, 21 associate professors and 40 assistant professors at Siddharth University. The university had invited applications for two posts of assistant professors in the Department of Psychology, one under the EWS quota and the other in the Other Backward Classes (OBC) category.

VC Dubey said that 150 applications were received for the post of assistant professor in the Department of Psychology, out of which 10 candidates were shortlisted on the basis of merit. One candidate did not appear for interview. After interviewing the remaining nine candidates, Dr. Harendra Sharma was found to be eligible under the OBC quota and Arun Kumar under the EWS quota. Both of them were appointed.

The executive council approved these appointments on May 21 and Arun Kumar joined duty the same day. The tenure of Dubey as vice-chancellor was scheduled to end on May 21, but the governor and chancellor Anandiben Patel granted him an extension till the appointment of next vice-chancellor.

When asked about the appointment of his brother, the minister Satish Dwivedi said that the allegations being levelled against him are baseless. He added that there is a difference in his and his brother’s income.

He claimed that he has not interfered in the university’s recruitment process and said he is ready to face a probe.

To be classified under the EWS category, the government has determined the following criteria: the income of the family of the candidate should be less than Rs 8 lakh per annum; the family of the candidate should not possess a residential plot of 100 square yard or more in notified municipalities, and the family should not possess 200 square yard of land or more in areas other than notified municipalities.

For the past few days, the copy of documents of the deeds of agriculture and residential land purchased by Satish Dwivedi and his mother during a period of two years have been going viral on social media.

According to the documents, the state minister and his family bought land worth more than Rs 2 crore in the period.

In a Facebook post, Nutan Thakur shared documents that showed the purchase of land worth Rs 1.26 crore for a mere Rs 20 lakh.