The director of industries said that assistant and junior engineers have been made nodal officers to mobilise industrial workers from factories and small units for Shah’s rally. 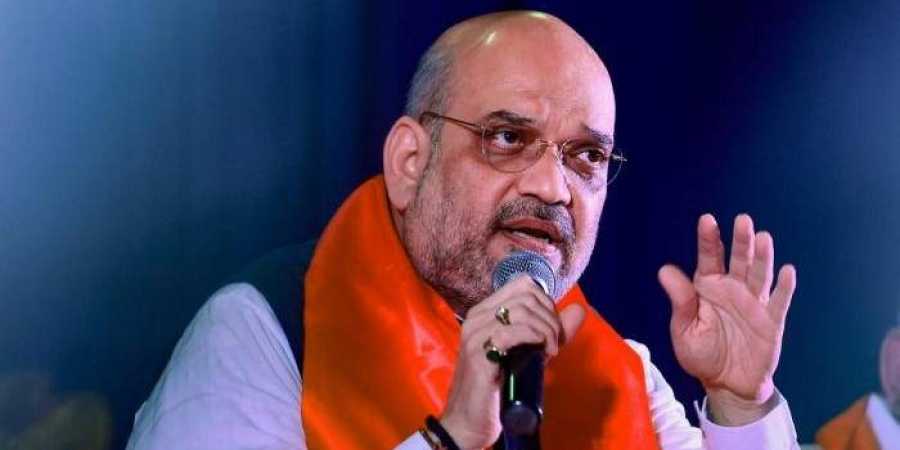 Jaipur: An order passed by the administration of union territory Dadra and Nagar Haveli, on the “mobilisation of industrial workers by the officers” during Amit Shah’s visit, has been criticised for involving the government machinery in political events.

The Union home minister and Bharatiya Janata Party president is addressing a rally in Silvassa on September 1.

The director of industries in Dadra and Nagar Haveli issued an order to the advisor to the administrator, secretary (industries), collector and deputy labour commissioner stating that assistant and junior engineers would be made nodal officers to mobilise industrial workers from factories and small units for Shah’s rally.

“The following officers are appointed as nodal officer [annexed to the order] to monitor the mobilisation of industrial workers from smaller units during the visit of the honourable home minister of India. The respective officers shall co-ordinate with representative of various industrial establishments for proper arrangement for the participation of workers during the above said visit,” the order read. 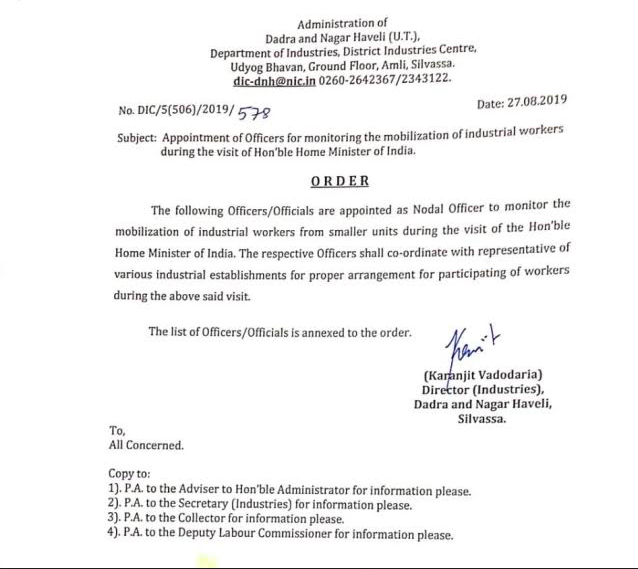 However, the administration has said the order has been unnecessarily blown out of proportion. Speaking to The Wire, director of industries Karanjit Vadodaria said, “The order was meant just for the coordination of the workers during the visit of the union home minister. It was not meant to “bring” workers as it is being portrayed. How we can compel workers to be a part of this function?”

“There is no rally at all, it’s just a meeting and as a part of the arrangements, we have to look after the parking and hassle-free traffic route for the attendees on their way to the venue. We are not doing anything other than that,” he added.

According to news reports, the Federation of Industrial Association in Silvassa has also alleged that the power of industrial units will be withdrawn on the day of Shah’s event so that workers have no option but to attend his event. It also said that industries have been given a minimum number of workers they must send to the event. 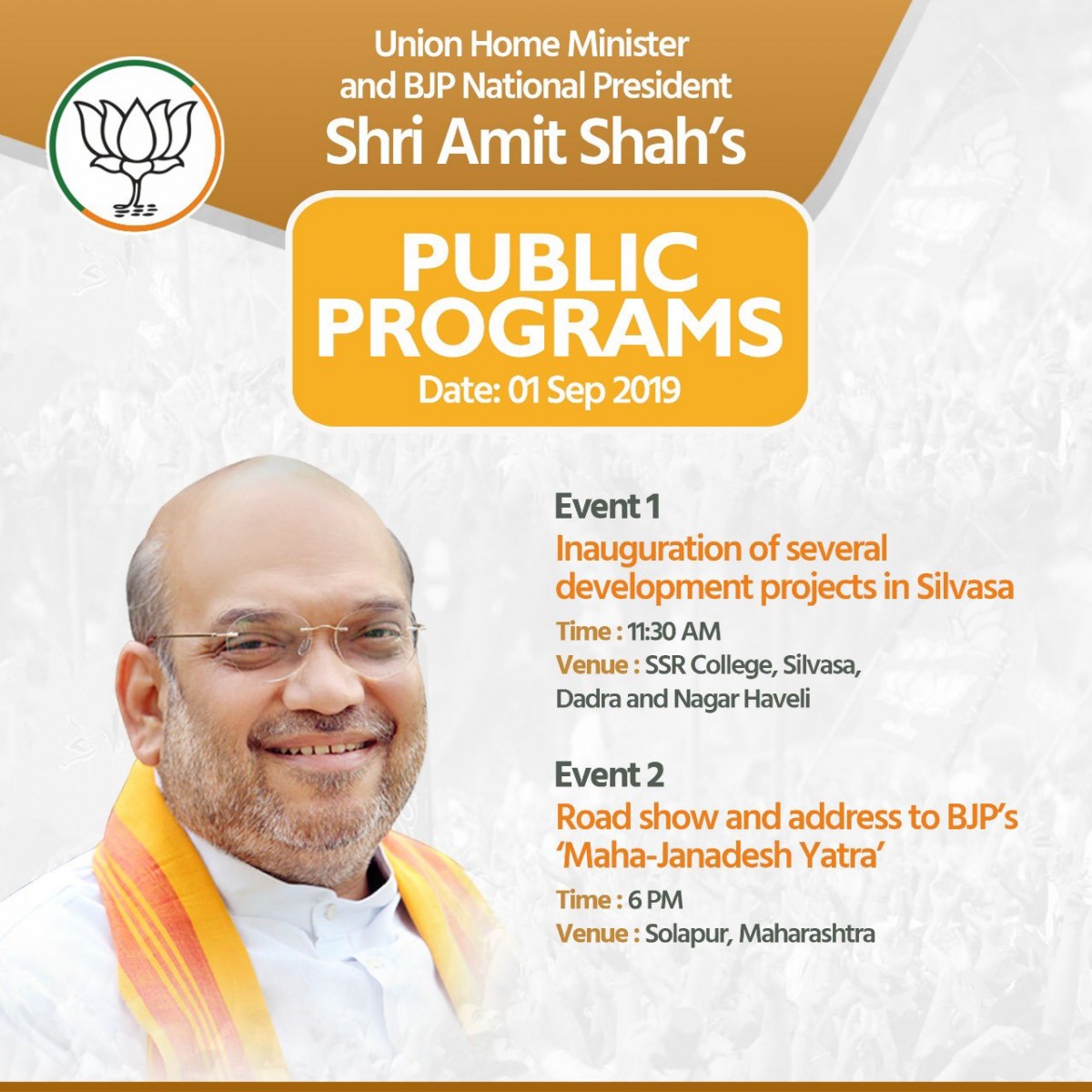 However, after “pressure” from the government to clarify its stance on the participation of industrial workers in the event, the federation denied any compulsion or involvement of the administration.

“We had a meeting with the administration some days ago, where they told us that they would coordinate the transportation of workers to the venue. But when we saw the news reports [portraying the administration in a bad light], we ourselves decided to debunk those allegations. There was no pressure on us to withdraw our statement on this issue,” Chandrakant Parekh, president of the Silvassa Industries and Manufacturing Association, told The Wire.

“The workers went during Modi’s rally in January too. In national-level events like these, workers want to go and hear what the leaders say,” he added.

Meanwhile, BJP leaders in the union territory have said that they are efficient enough to gather crowds for rallies on their own. “Every party worker and leader in Dadra and Nagar Haveli is putting in efforts to bring as many people as possible from their areas. There is no need for the administration to gather crowds for our rallies,” Patel Natubhai Gomanbhai, former BJP Lok Sabha MP from the Dadra and Nagar Haveli constituency, told The Wire.

Also read: Why Is BJP Changing Tack on NRC in Assam?

There is also an error in the order about Amit Shah’s event. The date mentioned in the order [January 16] corresponds to Prime Minister Narendra Modi’s rally held in Dadra and Nagar Haveli on January 19 this year. It is believed that the order used during Modi’s rally has been used in haste for Shah’s rally, which hints that administrative bodies have been used for organising political functions and rallies of the Modi government before. 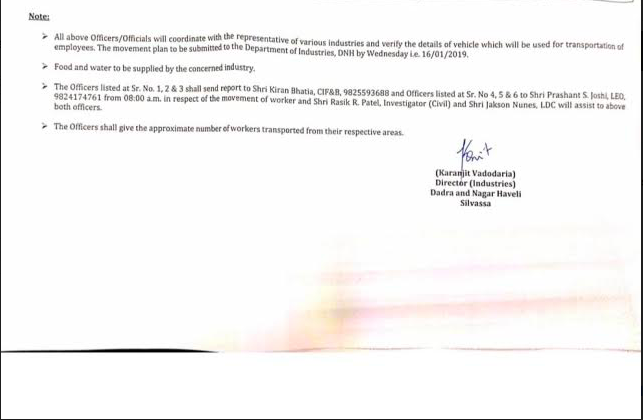 Wrong date mentioned on the order.

Last year in July, during Narendra Modi’s visit to Rajasthan’s Jaipur, the district collectors had issued invitation letters to the beneficiaries of various schemes of the Central government to join the prime minister’s rally. There, even MGNREGA workers were compelled to be a part of the function, or else their wages would not be given.