On Adityanath's Orders, UP Removes Nearly 11,000 Loudspeakers From Religious Places

Law enforcement officials have claimed that loudspeakers are being removed "from all religious places without any discrimination." 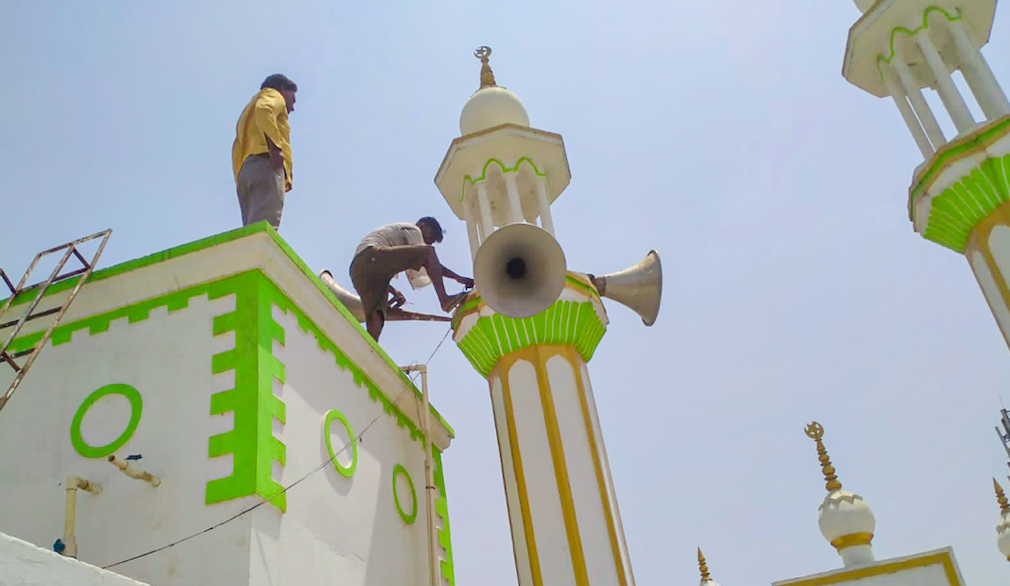 Representational image. A photograph released by the Uttar Pradesh CMO, showing workers removing loudspeakers from a mosque in Gorakhpur on April 27, 2022. Photo: PTI

New Delhi: The Uttar Pradesh government has claimed to have removed 10,923 loudspeakers from religious places across the state upon chief minister Adityanath’s orders.

Law enforcement officials have referred to these loudspeakers as “unauthorised”, “illegal” and having been placed without due permission from district administration or in excess of permitted numbers.

The volume levels of another 35,221 loudspeakers was set to “permissible limits” following the government order.

“A statewide drive is being undertaken to remove unauthorised loudspeakers from religious places and set the volume of others within permissible limits,” Additional Director General of Police (Law and Order) Prashant Kumar told the news agency PTI.

He added that loudspeakers are being removed “from all religious places without any discrimination.”

The Uttar Pradesh government’s action followed after chief minister Adityanath, during a review meeting on law and order with senior officials last week, said, “Though microphones can be used, it should be ensured that the sound does not come out of any premises. People should not face any problem.”

The home department has also sought a compliance report from the districts over the removal of loudspeakers at religious places by April 30. Norms under the Noise Pollution (Regulation and Control) Rules, 2000, have also been asked to be publicised.

To Indian Express, which asked Kumar about the process being followed in enforcing Adityanath’s orders, Kumar said: “The thumb rule is that the noise or the sound should not go beyond the premises. For instance, if a premise has five loudspeakers, upto three loudspeakers may be removed to ensure that the sound is limited to the premises while people are able to undertake their normal religious activities as well.”

The Uttar Pradesh government’s decision comes at a time when use of loudspeakers by mosques has been made into a political issue. Maharashtra Navnirman Sena chief Raj Thackeray earlier this month demanded that loudspeakers at mosques in the state be removed by May 3, failing which the Hanuman Chalisa would be played at a higher volume levels outside mosques.

ADG Kumar said orders of the high court regarding loudspeakers are also being considered during the exercise, but did not specify exactly which order.

On May 15, 2020, the Allahabad high court had held that azaan could be recited by a muezzin (an Islamic priest) from minarets of mosques without using any amplifying device or loudspeakers, India Today has reported. From time to time, other high courts have delivered verdicts on the matter. The Supreme Court in 2005 had ruled that loudspeakers could be permitted to be used till midnight on festive occasions for 15 days a year, after having previously imposed a blanket ban on use of loudspeakers between 10 pm and 6 am.

According to the information provided by the police department to PTI on Wednesday, the highest number of loudspeakers, 2,395, were removed from districts of the Lucknow zone. This was followed by Gorakhpur (1,788), Varanasi (1,366) and Meerut (1204) zones.

In terms of minimising the volume levels of loudspeakers, too, the Lucknow zone tops the list with action being taken against 7,397 loudspeakers, followed by Bareilly (6,257) and Meerut (5,976).

The exercise was conducted in the city by a joint team comprising officials of the Lucknow Municipal Corporation and the police.

“The exercise to remove loudspeakers was started on Tuesday and is currently underway. We are conducting the exercise in tandem with members of peace committees and religious heads of different religions. So far, we have not faced any opposition while conducting the drive,” Deputy Commissioner of Police (West) Somen Barma said.