Document handed over by embattled UP chief minister still carries Harvard logo even though institute publishing the report had removed it since it was improperly used. 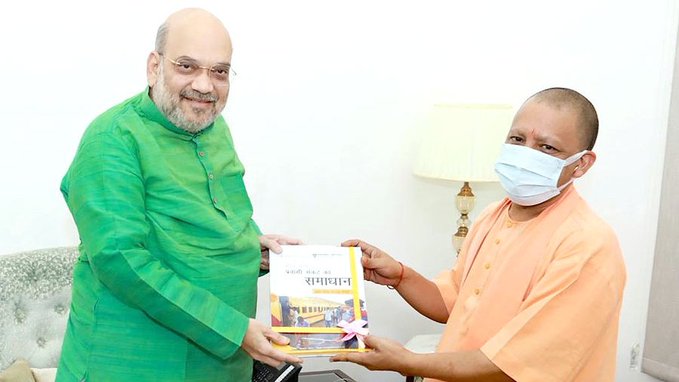 There have been reports of a growing political tussle between the Central government and the Yogi Adityanath government in Uttar Pradesh which will go to poll next year. Speculations of a rift are circulating amid Prime Minister Modi’s mishandling of COVID-19 and Adityanath facing flak over the rising number of dead bodies found in Ganga.

The UP chief minister has dismissed rumours of BJP’s unhappiness with his leadership. On June 10, he met home minister Amit Shah in Delhi. A photograph from the meeting showed Adityanath handing over a book to him titled ‘कोविड-19 एवं प्रवासी संकट का समाधान: उत्तर प्रदेश पर एक रिपोर्ट’’ (‘COVID-19 and the Migrant Crisis Resolution: A Report On Uttar Pradesh’).

The next day, Adityanath presented the book to Prime Minister Narendra Modi, President Ram Nath Kovind and BJP President JP Nadda. The photo with Nadda shows an English version of the same report – “COVID-19 & The Migrant Crisis Resolution: A Report On Uttar Pradesh”.

News agency UNI reported, “As a testimony of some excellent work in tackling probably the biggest migrant crisis in about a century, Uttar Pradesh chief minister Yogi Adityanath handed over a copy of the book to Prime Minister Narendra Modi released on the study conducted by Harvard University.”

“In fact, CM Yogi presented three books to PM Modi, one regarding the study of Harvard University, another the similar study by John Hopkins University and the third one by the suggested model of ascertaining Gross Domestic Product at the district level,” the report added. 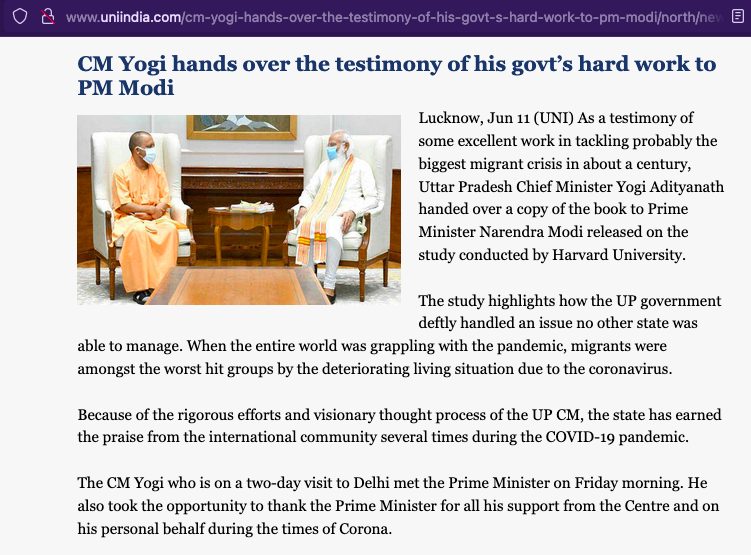 The Daily Pioneer reported the same on June 12. 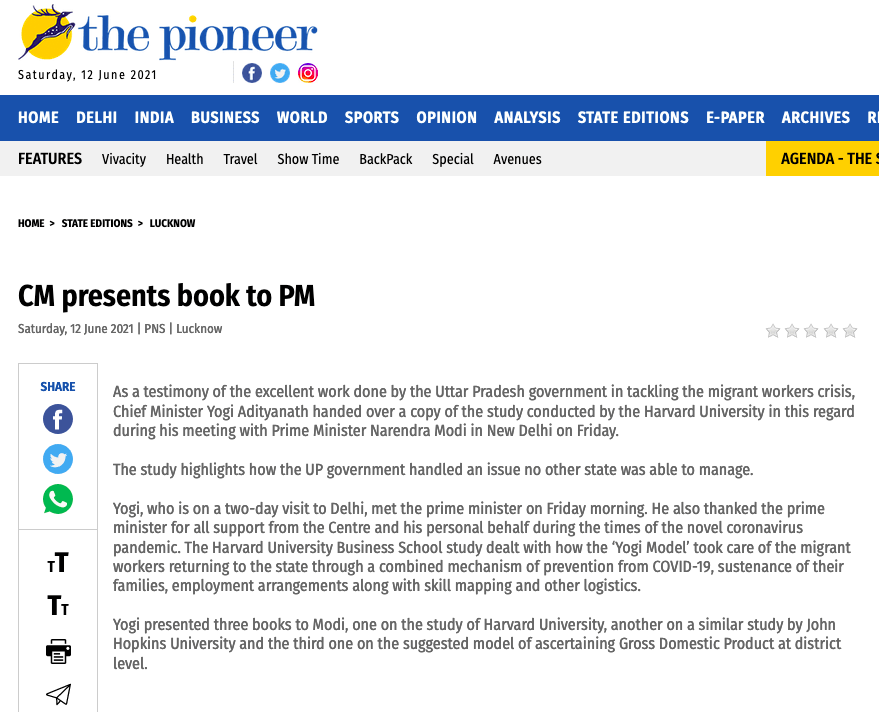 The study is not by Harvard

The book handed over by Adityanath to the home minister is the Hindi translation (‘कोविड-19 एवं प्रवासी संकट का समाधान: उत्तर प्रदेश पर एक रिपोर्ट’) of the study ‘COVID-19 & The Migrant Crisis Resolution: A Report On Uttar Pradesh’. The cover page of the book has two logos – Institute For Competitiveness (IFC) and Microeconomics of Competitiveness (MOC), an affiliate network of Harvard Business School. 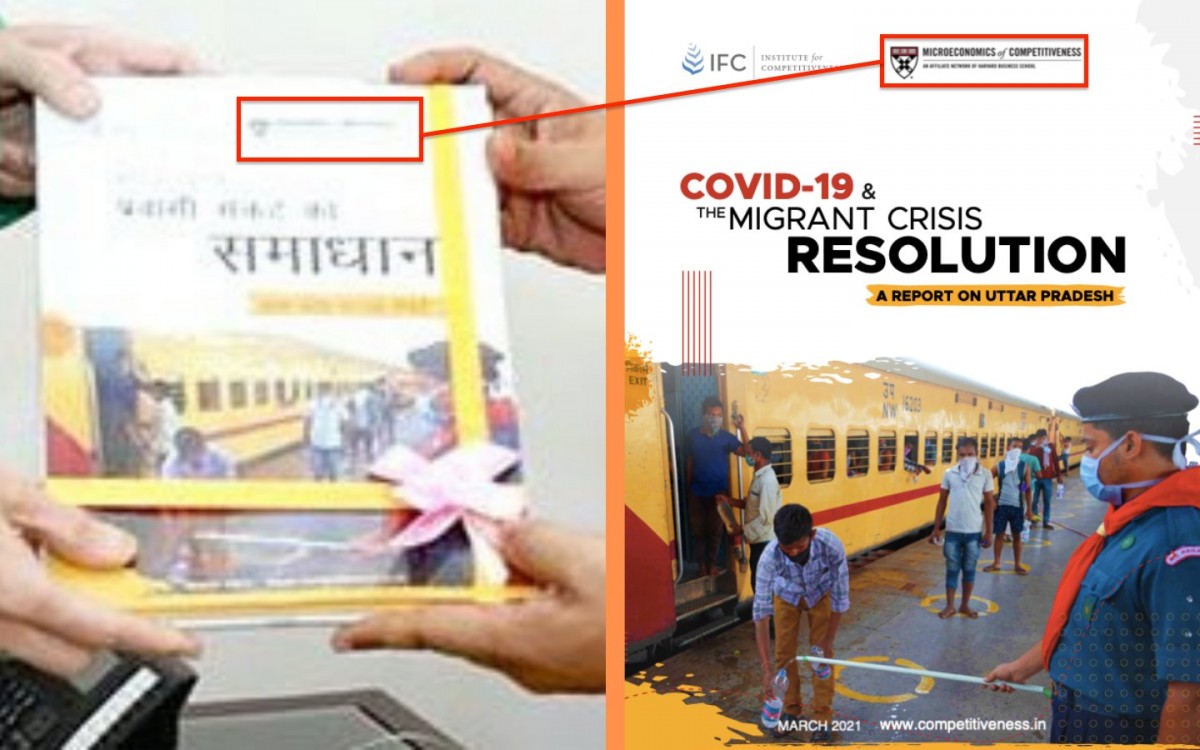 The study was shared on a WhatsApp group ‘State Media 1’ where the UP government communicates with journalists. This time as well, the study was misrepresented as a Harvard study and shared on the same group. 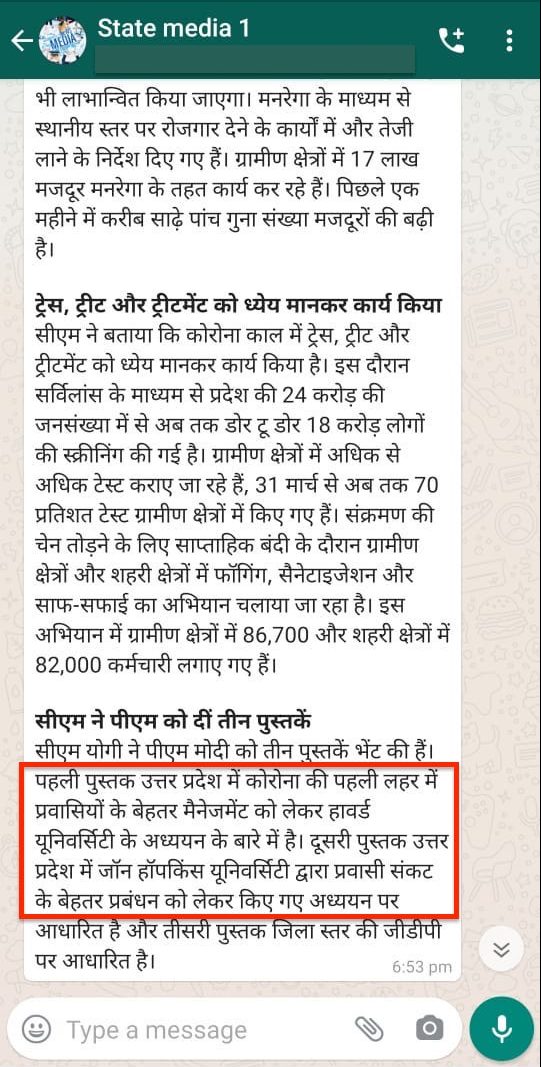 According to IFC’s website, it is “the Indian knot in the global network” of the Institute for Strategy and Competitiveness (ISC) at Harvard Business School. IFC doesn’t refer to itself as a part of Harvard Business School. ISC prospectus lists IFC as an affiliate of MOC, which is essentially a Harvard course on competitiveness and economic development. It was developed by Professor Michael Porter and the staff and affiliates of ISC.

Amit Kapoor, honorary chairman at IFC, had told Alt News over an email conversation, “It is not accurate to refer to a study by an MOC affiliate as a Harvard study.” Kapoor also informed, “Contrary to media reports, our study doesn’t conclude UP government handled the migrant crisis more effectively than other states. The document is not a comparative statement on the handling of the crisis by different states. It is documentation pertaining to the effort of the Uttar Pradesh government and extracting insights from the same.”

Also read: We Know the ‘Harvard’ Study on UP is Not from Harvard. It’s Also Not Much of a ‘Study’.

“The document was for internal consumption and was not intended to be made public. In addition, as you note, the study/document was not projected as a Harvard study anywhere in the document, rather as a work of the Institute For Competitiveness. The interpretation was unexpected. The logo from the report will be removed to correct the interpretation and to not project anything wrong,” he continued.

But after the study was handed over to the Prime Minister, the President and home minister still carried the logo, Alt News contacted Kapoor for clarification. “As stated earlier, the report was meant for internal use and not to be released in public. To your question, IFC did remove the MOC network logo from the report, which I am also attaching in the email. This report had not yet been released by Institute For Competitiveness in the public domain and the document is for limited internal circulation. These reports being shared have not been printed or published by Institute For Competitiveness.”

It is noteworthy that the document does not carry a disclaimer stating that it is only meant for internal use. 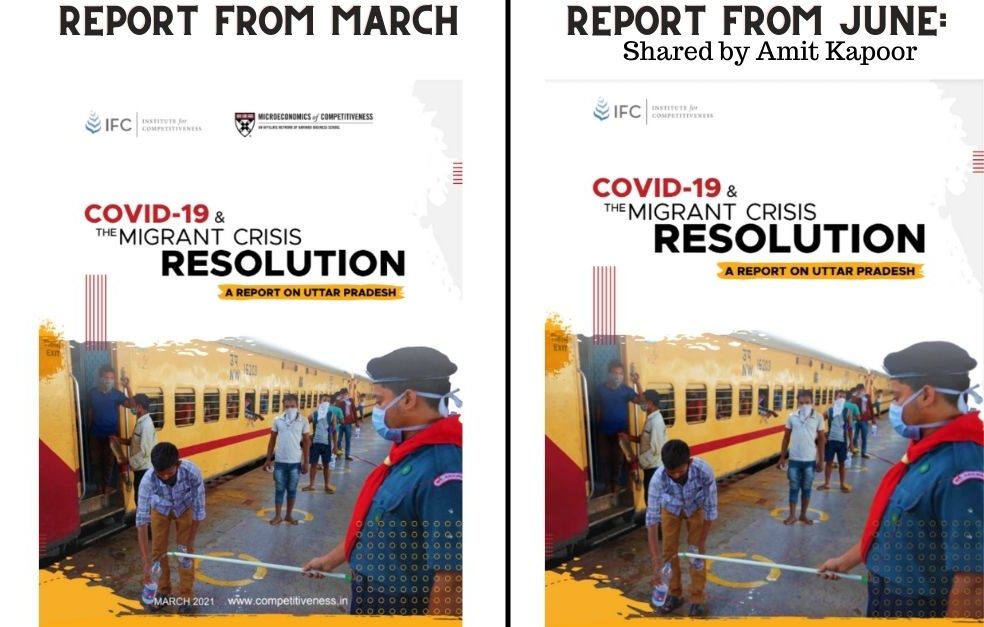 What did the Johns Hopkins study say?

UNI reported that another “similar study” by Johns Hopkins was also presented to the prime minister. Two months ago, Newsroom Post, Web Dunia and The Pioneer wrongly hailed Uttar Pradesh as a ‘topper’ in COVID-19 management, citing a report by Johns Hopkins. Dr David Peters, a professor at the university’s Department of International Health and one of the authors of the study, had refuted claims made by Indian media.

“The case study covered activities in UP from January 30, 2020, to January 15, 2021, and aimed to document the range of actions taken in Uttar Pradesh in response to COVID-19 and to identify lessons for how to respond in resource-constrained settings. As you can see in the report itself, the case study did not make comparisons to other countries or states, nor make claims about which states or countries are top performers,” he told Alt News.

In April, two studies were incorrectly projected by the media as studies by Harvard University and Johns Hopkins University lauding the UP government for managing the migrant crisis and COVID-19 better than other states. These claims were further amplified on social media and WhatsApp.

The study that was falsely attributed to Harvard especially gained a lot of traction with even prominent journalists tweeting about it. However, neither the claims nor the attribution was correct.

Despite clarifications published two months ago, UP chief minister Yogi Adityanath presented these studies to the Home Minister, the President and the Prime Minister. The false claims were also repeated on a WhatsApp group where the UP government communicates with journalists.