While the BJP is blaming AAP for "inflating" the capital's oxygen requirements, AAP leaders say the BJP is sharing a "fake" document. 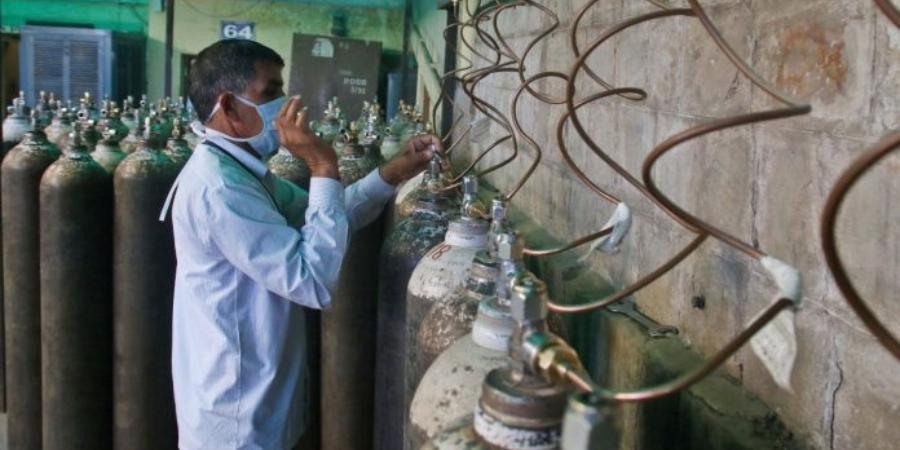 New Delhi: The Bharatiya Janata Party and Aam Aadmi Party are lashing out at each other because of a Supreme Court-appointed panel’s reported on India’s oxygen crisis. While the BJP is blaming AAP for “inflating” the capital’s oxygen requirements, AAP leaders say the BJP is sharing a “fake” document.

The National Task Force set up by the Supreme Court had a special subgroup, headed by AIIMS chief Dr Randeep Guleria, on Delhi. The report on Delhi has been submitted as an annexure to the panel’s overall recommendations on building oxygen capacity.

BJP spokesperson Sambit Patra said that other states suffered due to the Delhi government’s “lies”. “Because of Arvind Kejriwal’s lies, 12 states were affected due to the oxygen supply as the quantity of oxygen had to be cut off from everywhere and sent to Delhi,” BJP leader Sambit Patra said during a press briefing. “It is unbelievable to see that Arvind Kejriwal and the Delhi government politicised oxygen supply when Covid was at its peak. This is such petty politics. The data presented by Oxygen Audit Committee in the report is shocking,” he said.

Union minister Prakash Javadekar too hit out at the Kejriwal government. “Their demand for oxygen was four times more than what was needed and because of that the rest of the states had to bear the loss. One must learn how to make noise from Delhi government,” he tweeted in Hindi.

Deputy chief minister Manish Sisodia on Friday denied existence of any report by the Supreme Court-appointed Oxygen Audit Committee about Delhi exaggerating its oxygen requirement by four times during the second wave of the COVID-19 pandemic.

At an online press briefing, he accused the BJP of lying about such a report. “There is no such report. We have spoken to the members of the Oxygen Audit Committee formed by the Supreme Court. They said they have not signed or approved any such report. The BJP is presenting a false report that it prepared at its party headquarters. I challenge them to present such a report which has signatures of the members of the oxygen audit committee,” Sisodia said.

By doing this, the BJP is not abusing chief minister Arvind Kejriwal, but “those who lost their family members due to oxygen shortage when coronavirus cases were at its peak”, he said and accused the Union government of mismanagement “which led to the oxygen crisis”.

The Wire contacted Dr Guleria to ask about the report and the BJP’s allegations against the Delhi government. His office, however, suggested that Guleria does not want to speak on the issue. “He is busy. The committee was set up by the Supreme Court, so the court should be asked about it,” Guleria’s office said.

Delhi was hit severely by a brutal second wave of the COVID-19 pandemic in April and May, claiming a massive number of lives daily, with a shortage in oxygen supply at various city hospitals adding to the number of COVID-related deaths. Several hospitals were putting out regular SOS messages for oxygen supply.