'One District, One Product' introduced in Gaurahari village is an example of handicraft and livelihood development schemes often being abandoned in the middle, leaving traditional artisans to fend for themselves. 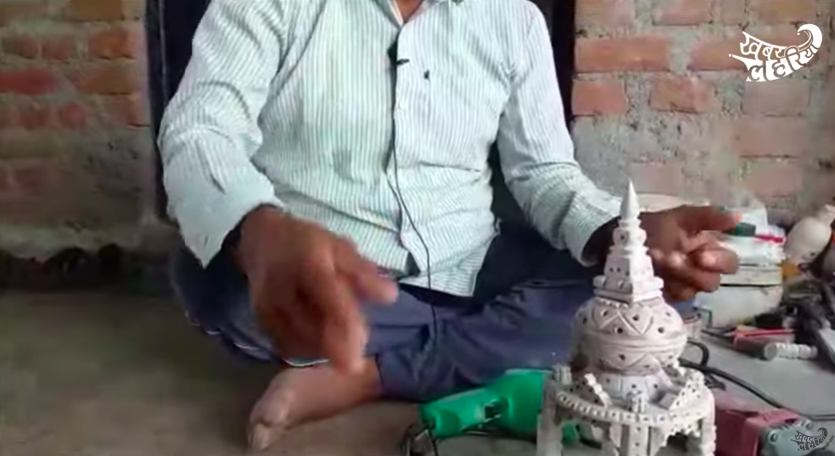 In 2018, the stone-work artisans of Gaurahari village in Uttar Pradesh’s Mahoba were lauded by the president and chief minister Adityanath for their work at a crafts summit in Lucknow. Now, a year later, they have nearly lost hope of any future for their craft and have become distrustful of government schemes for its revival or development.

In January, the chief minister launched ‘One District, One Product’ (ODOP) scheme to encourage sales and visibility of indigenous products/crafts at the district level. This flagship UP government scheme has left these villagers wary of any future support programmes.

Theirs was once a thriving and renowned craft of Gaurahari stonework, wherein they made a wide range of handicrafts, statues and ornamental utensils out of a particular coloured stone called gaura patthar. The soft texture and radiance of the stone made it suitable for such work. Over 70% of Gaurahari’s artisans were dependent on the trade.

The village is bordered by several hills made of this stone, which they mined for raw material and sold to several cities outside the state. It was among the many renowned handicraft items of Uttar Pradesh. According to state government estimates, UP alone contributes 44% of the total handicraft exports from the country. The Indian textile and handicrafts industry is one of the largest employment generators after agriculture. The sector employs seven million people, which include a large number of women and the poor. Continuous revival and development programmes are hence necessary for its sustenance.

However, according to the artisans, hardly any of these promises have materialised. ODOP’s website though proudly showcases Gaurahari craft as its project from Mahoba district.

Kalindi, an artisan and master trainer, said: “The art of stone craft is dying. Our village was selected for the implementation of this scheme twice and even the budget had been passed. But I don’t know why it hasn’t been released yet. I even requested the DM to intervene so that the craft stays alive. They involved NGOs for its implementation and they just focus on the number of items produced to meet targets after which there is no looking back.”

His sense of dejection was palpable, as he added: “I am against such schemes now. Next time it comes, I will not teach anyone and others like me will also not participate.”

The only component of the programme that has been implemented so far is the training sessions, which were plagued with problems too. He reports that: “In this village itself, around 400 people have received training, of which I myself have trained 200-250 people. They should have chosen more number of youth in the age group of 18-25. Women take the most interest in this work. But there were even people from the 70+ age group selected in the training programme.”

The trainees too feel deceived for not having received any of the proposed benefits. Parvati, an artisan who had received the training sessions, said, “I have been trained in the workshop but haven’t received any payment yet. How will I know why this is so? Is it the people from the top or the middlemen? When our boss isn’t receiving payments, how will he pay us? It takes months of instruction to be able to start making one’s own pieces. We can’t do this and start delivering on orders just within a few days of training.”

Virendra Kumar Verma, another trainer, said, “I was enthusiastic initially about this initiative, but don’t feel the same now. We had gone to Lucknow last year for an event attended by the president and chief minister, where there were good sales.”Post this, things have only gone downhill.

He says, “According to the scheme guidelines, the trainees should receive Rs 200 per class and the trainers also are supposed to receive a fee. Tools are also to be given to the students. Only 25 people have received these so far, and we have sent a list of 100 people who are yet to receive them. With all of these delays, I don’t think this scheme will work.”

To top it all off, government imposed-norms have placed the final nail in the coffin of Gaurahari craft. The reserves of gaura patthar are no longer freely available to be mined. An accident that happened at a mining site in 2016 leading to the death of two labourers employed by a private contractor lead to a blanket ban on mining in the area. The erstwhile dumpsite for the mined rock is now the only reserve. To compensate for the shortfall, the local authorities had a novel ‘solution’, as reported by Virendra Kumar, “Out of two trainings, they have mandated training in brass statue making also this time. Why did they do this, when the scheme is about one district and one product?”

The DM of Mahoba offers various reasons for why brass has been included in the programme: “There were 4-5 casualties caused sometime back when the gaura stone was being mined, after which its mining was banned. So, as a substitute, we proposed brass products which were doing well. We have now given a proposal for a brass product training institute. Training for gaura craft hasn’t happened much, and we have had a meeting about this in the village.”