The minister suggested making prenatal sex determination mandatory for all pregnancies to avoid sex selective abortions. Doctors and women’s rights activists on what this will mean in practice. 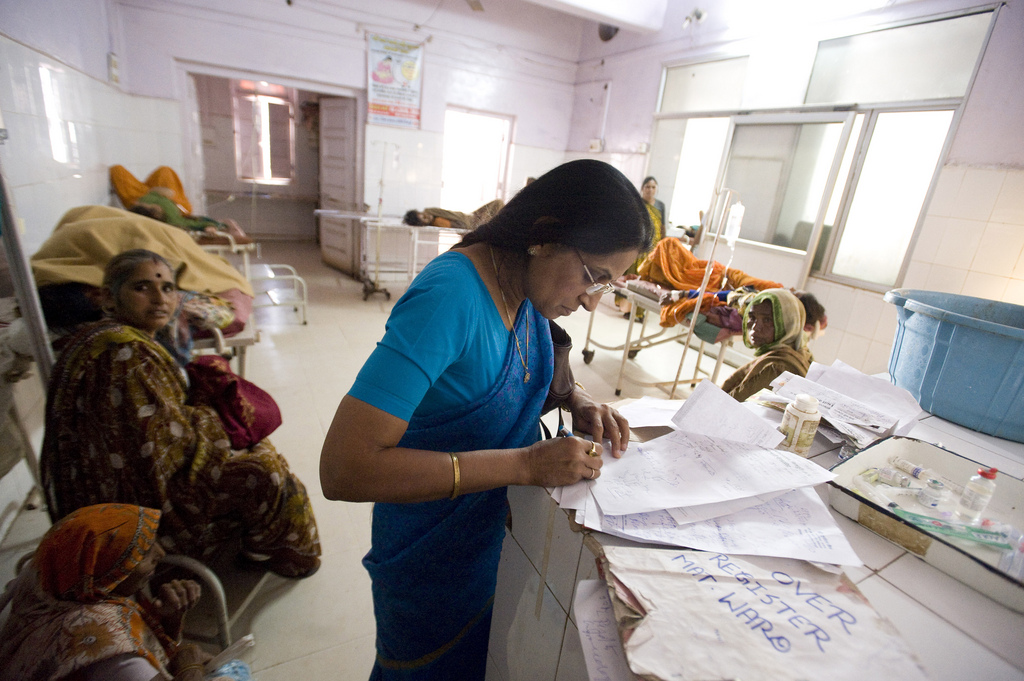 New Delhi: How do we improve the low status of girl children in India, or even ensure their existence and survival once the technologies that enable sex-selective abortion are widespread? On Monday, Union Minister for Women and Child Development Maneka Gandhi presented a novel if problematic proposal, arguing that making prenatal sex determination compulsory for all pregnant women would mean less sex selective abortions in the country. Once a foetus is discovered to be female, it can be tracked to birth and given adequate nutrients. While the ministry has since backtracked somewhat in the face of vociferous opposition to this proposal, there are also those who continue to believe that this suggestion has some validity.

Sex selective abortion, and the question of India’s “missing women” as termed by Amartya Sen, has become a major topic of contention over the years. The 1991 Census of India showed the child sex ratio (of children aged 0-6) was 941 girls for every 1000 boys. In 2001, this number had fallen to 927. The Census of 2011 continued the worrying  trend, with the ratio dropping to 914. While some areas, particularly the more prosperous north-west of the country, have always had poor ratios, what is surprising is that the numbers are dropping in areas that were more equal in this regard in previous Censuses: states like Maharashtra, Goa, Madhya Pradesh and Andhra Pradesh have seen a decline in their child sex ratios. Meanwhile, India’s overall sex ratio is going up due to the increasing life expectancy of women rather than more female births.

Why India created a law on sex tests

These alarming rates and the ease with which foetal sex can be determined using medical technologies is what gave rise to the Pre-conception and Pre-natal Diagnostic Techniques (Regulation and Prevention of Misuse) – or PCPNDT – Act of 1994 and 2003.

According to this Act, no medical practitioner is allowed to reveal the sex of a foetus. It also regulates the availability of ultrasound machines and other pre-natal diagnostic technologies, only making them available to centres, laboratories and clinics that are registered under the Act. Centres performing ultrasound scans also need to fill an online disclaimer form each time an ultrasound is performed on a pregnant woman, so that the government can perform audits at any given time. It is only under this Act that doctors are obliged to keep records even of OPD patients.

Under the PCPNDT Act, the pregnant woman is considered innocent of the act of sex determination unless proved otherwise. Those who can be held liable are the medical personnel, responsible people at the facility, any mediator who may abet the pregnant woman’s access to such information, the husband and relatives of the woman and anyone advertising sex selection in any form.

With ultrasound scans taking place behind closed doors, it is difficult to catch doctors who do reveal the sex of a foetus to parents. There is no paper trail – it can be done verbally or even just with a sign. While there have been “stings” in the past by sending decoy patients into doctors’ offices, this is only possible on a very small scale. Instead, it is much easier to find cases of poorly kept or incomplete records. Women’s groups such as the All India Democratic Women’s Association (AIDWA) have argued that all instances of record mismanagement should be seen as mala fide, and penalties should reflect that.

There is widespread agreement amongst different medical and activist groups that the PCPNDT Act as it stands has not been successful. However, rather than strengthening its implementation, Maneka Gandhi’s suggestion would mean doing away with the Act completely, in effect making the legal norm the very opposite of what the Act stipulates. Most significantly, it would shift the burden of ensuring a “healthy delivery” of the girl child effectively on to the mother.

Many believe, however, that this would not solve the problem, and would lead to a whole range of different issues.

Professor Mary John of the Centre for Women’s Development Studies raises serious doubts on the practicality of this approach. Since even the minimal amount of monitoring that the PCPNDT Act had mandated, such as checking discrepancies in clinic records, has not been done so far, it is strange to expect the kind of monitoring that would require “the entire Indian Army to be deployed”. Smita Gupta of AIDWA agrees, asking how a government that does not even provide institutional deliveries to all pregnant women could think that it would be possible to so closely monitor each pregnancy. Calling the minister “an apologist for the private medical fraternity”, Gupta adds that this proposal is nothing more than an attempt to absolve medical practitioners and ultrasound owners who make profits from sex determination of their duties under the Act. This view is echoed by Dr. Puneet Bedi, an obstetrics and gynaecology consultant at Delhi’s Apollo Hospital. “This is just a method to shift blame from the medical practitioners who do these things only for the money”, Dr. Bedi told The Wire. “The government is clearly doing this on behalf of a medical lobby”. Mary John also agrees that the law should be aimed at medical practices that aggressively advertise sex determination and sex selective abortions to their patients, using medical technology for sex selection rather than ensuring safe birth.

Dr. Bedi and Dr. Rachna Verma, a Delhi-based gynaecologist, also believe that this move will not deter sex selective abortions, and argue that it might in fact make them more common. “Abortion tablets are now available over the counter. If a family is actively made aware of the foetus’s sex and wants to abort to the pregnancy, they will find a way”, Dr. Verma said. Even aside from the feasibility of this idea, feminists see the suggested change as counterproductive and violating women’s basic rights. For one, it would curtail the autonomy of those wanting an abortion for reasons other than sex selection, making legal abortions and post-abortion care harder to access. A statement signed by 30 civil society networks, organisations and individuals makes this clear: “The Hon. Minister must be aware that unsafe abortions significantly contribute to the very high maternal deaths in India, and such rules will contribute to further maternal deaths. We need to move towards greater empowerment and autonomy for all our citizens and a fulfilment of their human rights, and not move back into an era where vigilante behaviour was encouraged and our bodies and lives were not in our control.”

Syeda Hameed, former member of the Planning Commission who in 2011 had mooted a similar proposal, also spoke out against this increased surveillance, telling The Wire that this would lead to extremely intrusive policing of a woman’s body.

The minister’s statement is not the first time this idea has been floated. Doctors’ lobby groups have been arguing for a while that it is unfair to punish medical practitioners for cases of incorrect record keeping. In light of these views and the continuously falling child sex ratio, the government formed a National Steering Committee of experts to review the Act. Kiran Moghe of AIDWA notes that this committee is made up entirely of representatives from major medical societies, without a single representative from any women’s group. This is telling of where the government’s priorities are focussed. “A law that came into being after a very strong campaign from women’s rights groups is now going to be amended without any input from these groups”, she told The Wire.

The PCPNDT Act is strong, as a law. “It is one of only three laws in the country that put the onus of proving innocence on the defendant, the others being institutional rape and child abuse”, Dr. Bedi told The Wire. “The problem is that no government has been interested in implementing it. Someone has to go through each practice’s records, comparing the ultrasound results with the live births of the practice.”

Of course, sex selective abortions are a symptom of larger social issues and gender disparities. Mary John emphasises the importance of studying and addressing the political economy situation of current modernity that makes female children unwanted. While the PCPNDT Act is important to make sure medical practitioners do not abuse their power, much more effort is also needed from the government to ensure that a girl-only family is not considered unviable in the country.