While women's rights groups and political parties hailed the decision as progressive, the All India Muslim Personal Law Board welcomed three judges' emphasis on the freedom of religion.

The Supreme Court on Tuesday set aside triple talaq as unconstitutional. Credit: PTI 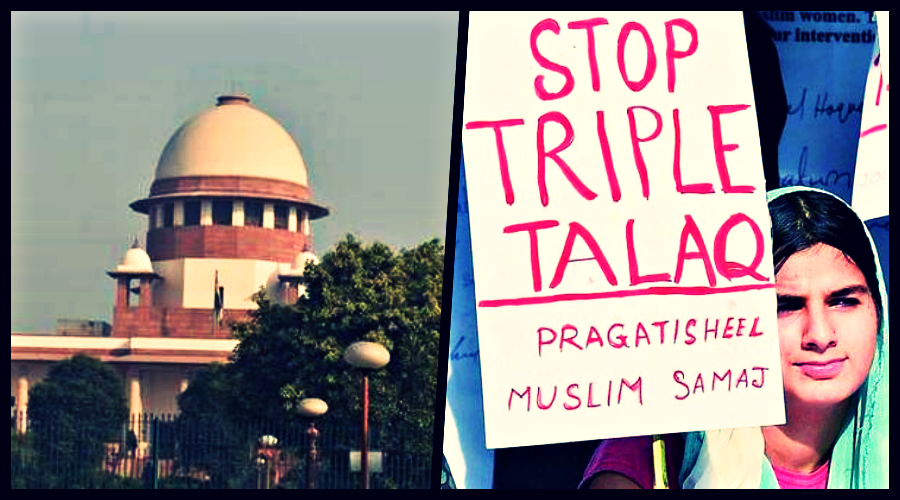 The Supreme Court on Tuesday set aside triple talaq as unconstitutional. Credit: PTI

New Delhi: Soon after the Supreme Court’s constitutional bench set aside the practice of instant triple talaq (talaq-e-biddat or triple talaq in one sitting) as void and illegal, several social and political organisations, including the All India Muslim Personal Law Board (AIMPLB) which has been opposing any legal intervention in Muslim personal law, have welcomed the verdict.

AIMPLB happy with emphasis on Article 25

“We, as a representative body, welcome the Judgment of the Hon’ble Supreme Court since it accords protection to Muslim personal law and says that personal laws cannot be tested by courts on the grounds of violation of fundamental rights,” said a press release from the AIMPLB.

Although the case pertained to the validity of instant triple talaq, the AIMPLB was concerned more about whether courts should interfere in religious personal laws or not. It is in this context that the organisation welcomed the verdict as the three of the five members in the bench based their views on the basis of Article 25 of the constitution, which guarantees the right to freely practice and profess all religions.

It referred to the views of three judges in the five-member bench – Justices J.S. Khehar, Kurian Joseph and Abdul Nazeer – who “accorded personal laws the status of a fundamental right protected under the right to practice religion contained in Article 25 (of the constitution).”

In the verdict, which set aside instant triple talaq by a 3-2 majority, Justice Khehar and Justice Nazeer felt that the court had no right to tinker with religious personal laws, which enjoy special protection in the constitution. Justice Joseph, while going with the majority view along with Justices Rohinton F. Nariman and Uday U. Lalit, said that the practice was against the teachings of the Quran and, therefore, violated Muslim personal law.

Claiming that the judgement was a “huge victory” for the organisation, the AIMPLB said that the verdict vindicated its stand and ensured that all religions were free to practice their “religious faith/beliefs.” It also said that the judgement is strong enough to prevent any future “interference by the courts in matters of practice emanating from religious texts and belief systems of different communities.”

It is noteworthy that the AIMPLB, while advocating a position of non-interference by the courts, had been opposing the legal pleas of women who had suffered from the practice of instant triple talaq, but at the same time talked about reforms within the Muslim community.

“Insofar as the practice of talaq-e-biddat is concerned, we had already submitted to the court that the practice of three pronouncements of talaq in one sitting, though it has basis in religious texts and belief thereon, is not the best way of pronouncing talaq and various surveys suggest that it is seldom resorted to. For a long time, we ourselves have taken steps to discourage this practice through community reform programmes and Model Form of nikahnama issued by the Board,” it said.

It added that the AIMPLB in an affidavit had told the court that it has “issued instructions to maulvis/qazis to incorporate conditions in the nikahnama to provide for the option to the marrying parties to exclude the option” of instant triple talaq.

Although the two dissenting judges – Justice Khehar and Justice Nazeer – have directed the the central government to pass a law on instant triple talaq within six months, the AIMPLB said that since the majority in the bench has already struck it down, the central government “cannot interfere with personal laws through legislation” and that the matter has already been resolved in the court.

Various organisations advocating justice for women have unequivocally welcomed the decision. In a statement, the National Federation of Indian Women (NFIW), a collective which has been demanding amendments in all religious personal laws, welcomed the verdict which held instant triple talaq as “unconstitutional” and regards personal laws as “discriminatory towards women.”

“The NFIW congratulates all those women and men who stood against the barbaric practice of instant triple talaq and the practice of “halala” to reunite with her husband after the proclamation of instant talaq. Today’s SC verdict is a crucial step towards women’s equality and justice as enshrined in the Constitution,” it said, while also welcoming the minority view in the bench which wanted the central government to make a law against instant triple talaq.

However, it cautioned the government and said that “instead of limiting and targeting one community, use this opportunity to put an end to the injustice and discrimination involved in all religious personal laws against women.” It also expressed disappointment with the Supreme Court for not saying anything about Muslim women’s right to divorce, which disproportionately favours men. The organisation demanded that the process of divorce should be the same for both men and women.

“The Union government will have to ensure all rights including maintenance to every divorced woman in all religion. We demand to ensure a window for women who have been victims of triple talaq in recent years and already suffering all sorts of difficulties, to approach the court for justice. NFIW demands that the Central government should initiate wide range consultations with all stake holders including women organisations,” it added.

A number of women’s organisations – Bebaak Collective, Awaz-e-Niswaan, Parcham, Parwaaz, Sahiyar, Janvikas, Sadbhavna Trust, Vanangana, Muslim Mahila Manch, , Forum against Oppression of Women, Labia – A Queer Feminist LBT Collective, Saheli Women’s Resource Centre, Association For Advocacy and Legal Initiatives, Peoples’ Union for Civil Liberties, Astitva, Indian Institute of Minority Education, SANGRAM/Nazariya, Swayam – in a joint statement thought that in deeming instant triple talaq as both “un-Quranic and un-constitutional”, the Supreme Court verdict is an “important departure from earlier on all women’s rights, because it is based on the tenets of equality, dignity and secularism as enshrined in the Constitution.”

The rights groups go on to say that they recognise that in an Islamophobhic world where the Muslim community is constantly under attack, the fight for minority and gender rights is a difficult task. In this political context, the organisations extended their support to all “Muslim women who have fought everyday patriarchy within religious institutions and the family, as well as communal forces to seek justice and equality from the courts.”

“Even as we celebrate this victory as one that strengthens the fight for secular rights, we are aware that this is but one step in our continued battle against all kinds of patriarchal power and the prevailing political order that seeks to convert this into a majority-minority issue,” the statement said, asserting that the struggle for gender justice has to go beyond the religious framework.

Human rights group Amnesty International India also hailed the judgement. Asmita Basu, programmes director, said, “Triple talaq is a discriminatory practice that violates women’s rights to equality and has devastated the lives of many Muslim women. The Supreme Court’s bar on this regressive practice is a step forward for women’s rights in India. We urge the government to repeal all religious family laws that violates women’s right to equality, without exception.”

Among political parties, the Communist Party of India (Marxist) and the Congress party were the first to welcome the judgement.

“The Supreme Court upheld the fact that personal laws of communities are protected under Article 25 (freedom to practice any religion) and cannot always be strictly tested on the touchstone of part 3 of the constitution (which upholds equality before law). The Supreme Court’s verdict is a culmination and acceptance of this wider wisdom, as also the recognition of the rights of the Muslims women. We welcome the same,” Congress spokesperson Randeep Surjewala said, while staying away from questions about the judgement’s immediate political impact.

The All India Progressive Women’s Association (AIPWA), affiliated with the Communist Party of India (ML-Liberation) saw the verdict as “a victory for Muslim women and Muslim women’s groups that have led a sustained struggle for the ban on the practice of instant triple talaq.”

Hailing the judgement as affirming “the constitutional values of equality, rights and dignity of women,” it said that the Muslim women’s struggles assumes greater significance because they have led the movement in “a hostile climate – where the central government has tried to politically appropriate their struggle for its own communal agenda, and where the rights and dignity of minorities are under an unprecedented attack in India.”

Attacking the BJP, whose members and sympathisers have given credit to Prime Minister Narendra Modi for the judgement, the AIPWA said that the attempts to “use this verdict as a pretext to humiliate the minority community is condemnable.”

“The constitution protects the rights of women as well as the rights of minorities and other vulnerable communities, and these should not be pitted against each other,” it said, while criticising attempts by the supporters of BJP to project the judgement as the “the defeat of the Muslim community.”

However, it said that it will oppose any move by the central government to introduce a uniform civil code, which has been one of the long-held agendas of the saffron party. “…personal laws reform should be done from the perspective of gender justice rather that uniformity. There are a wide range of patriarchal aspects in many existing personal laws pertaining to all communities, which require reform,” AIPWA added, maintaining that the task of safeguarding constitutional rights lies with the courts and should not be transferred to the legislature, since rights are not decided by a popular government at any given point of time.

Since the majority view in the bench prevailed, the women’s group, therefore, said that the government cannot legislate on the instant triple talaq law as proposed by the two dissenting judges. Instead, it demanded that discussions on the chapter on personal law reform in the report of the latest high-level committee on status of women should be initiated with women’s movement groups.

The All India Democratic Women’s Association, an associate of the CPI(M), categorically welcomed only the majority judgement while disagreeing with the minority view of the bench. “AIDWA has always opposed the unilateral, arbitrary, irrevocable and instantaneous triple talaq, which has always adversely affected the lives of millions of Muslim women. Muslim women have been left traumatised and abandoned without any financial or other recourse after this form of instant talaq, which was increasingly being uttered through electronic and impersonal methods like SMS, Skype, etcetera,” it said, adding that it has legally been aiding victims of the practice for many decades.

It added that the Justice Kurian Joseph, Justice Nariman and Justice U.U. Lalit have rightly pointed out that instant triple talaq violates the Quran and Shariat, and therefore it cannot be held as essential to Islam. The women’s group said that Justice Kurian has also shown a legal precedent in Shamim Ara vs. State of UP, in which the bench had underscored the fact that “the Muslim husband does not enjoy an arbitrary, unilateral power to inflict instant divorce as it does not accord with Islamic injunctions.”

Criticising the BJP-led government’s attempts to corner credit for the verdict, it said, “AIDWA has always opposed the government’s attempt to propagate a uniform civil code and feels that the present regime may use the minority judgment to further promote the uniform civil code and target the Muslim community. This government is not interested in gender-just laws for any community and cannot be relied upon to bring in a law to genuinely protect the interests of women.”