While the All India Muslim Personal Law Board has asked the court not to interfere with freedom of religion, the Centre has argued that gender equality and the dignity of women are constitutional values and cannot be compromised with. 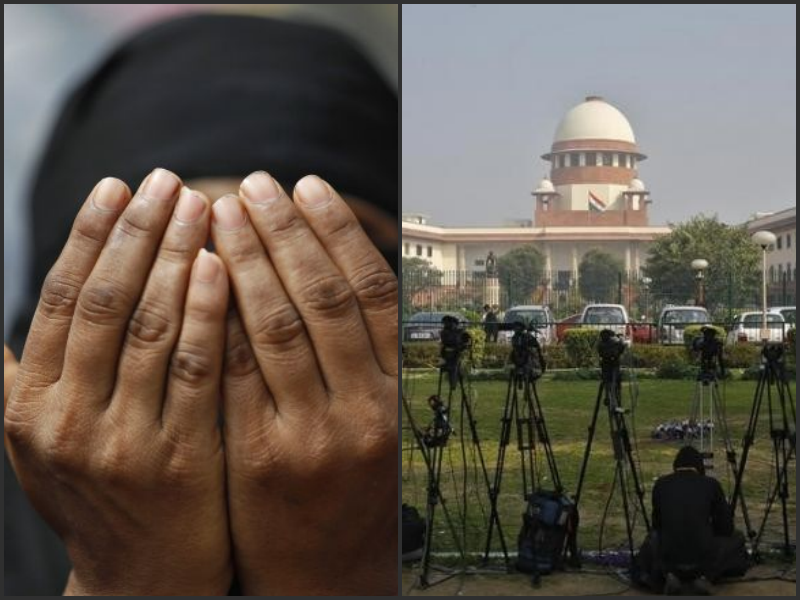 The Supreme Court will pronounce its verdict on Tuesday (August 22). Credit: Reuters

New Delhi: A five-judge constitution bench of the Supreme Court will on Tuesday (August 22) pronounce its verdict on a batch of petitions challenging the constitutional validity of the practices of talaq-e-bidat and nikah-halala (forms of divorce) in Islam.

The bench comprises CJI J.S. Khehar (Sikh), Justice Kurian Joseph (Christian), Justice Rohinton Nariman (Parsi), Justice Uday Lalit (Hindu) and Justice Abdul Nazeer (Muslim). Considering the importance of the issues involved in the adjudication, each judge is giving a separate judgment. It is not clear whether they are concurring or differing judgments.

With Prime Minister Narendra Modi asking Muslims not to politicise the triple talaq issue, the Centre has maintained that these practices are not protected under the freedom of religion guaranteed under Article 25 of the constitution. It said that the fundamental question for the court in this case was whether, in a secular democracy, religion can be a reason for denying equal status and dignity available to Muslim women under the constitution.

Arguments of All India Muslim Personal Law Board

The All India Muslim Personal Law Board has justified in the Supreme Court the triple talaq form of divorce and cautioned the court from interference with personal laws in the guise of social reform and bringing in the uniform civil code. The board said all the four distinct schools of jurists – Hanafi, Shafai, Maliki and Hanbali – accept that all three utterances of triple talaq are effective and validly terminate a marriage.

The board argued that though pronouncement of triple talaq is considered to be a sin, it is still a valid and effective form of divorce. In Islamic jurisprudence, many times an irregular or improper nature of an act does not affect the legal consequences of the act. Though triple talaq is the least appreciated form of terminating a marriage, yet is very much effective and in line with the Shariat law. It allows the couple to divorce themselves from the marital bond irrevocably and without elongating the procedure of separation.

The board contended in the court that to presume that each triple talaq is arbitrary and unreasonable is a fallacy. The Shariat law intends to keep the painful process of separation/divorce private in order to protect the dignity of both parties and to avoid mudslinging in public. It also protects the interest of the parties to move on without much bitterness and hatred towards each other. Asking the court not to interfere with freedom of religion, the board said the issues raised in the batch of petitions had already been decided by the court and hence the issues need not be re-opened again.

The Centre said it is of the view that gender equality and the dignity of women are non-negotiable, overarching constitutional values and can brook no compromise. Triple talaq is a practice, which impacts the social status and dignity of Muslim women and renders them unequal and vulnerable to the men belonging to their own community; women belonging to other communities and also to Muslim women outside India.

The Centre said there are unreasonable classifications, which arise from practices such as those under challenge in the present petition, which deny to Muslim women the full enjoyment of fundamental rights, guaranteed under the constitution. The paradox is that Muslim women in India are more vulnerable in their social status because of the prevalence of such practices, even though they live in a secular country. It submitted that the practice of polygamy is a social practice rather than a religious one and therefore would not be protected under Article 25.

Issues to be adjudicated

The court will determine among other things whether triple talaq violated basic human rights of Muslim women who are subjected to this religious practice; whether the practices of talaq is protected under Article 25 (1) of the constitution (right to freedom of religion); whether Article 25 (1) is subjected to fundamental rights of the Indian constitution and in particular, Article 14 (right to equality) and Article 21 (right to life) of the constitution; Whether the practices of triple talaq are of a secular nature, namely marriage and divorce, and thus not protected under Article 25(1) although they may be considered as a part of religion.

Whether this practice runs counter to constitutional morality that guarantees equality before law and equal protection of laws?; Whether instantaneous triple talaq in one sitting (talaq-e-bidat) in the absence of witnesses and without any attempt at reconciliation and nikah-halala are legally permissible; Whether this practice has been abolished by various Islamic states, which establishes the fact that such practice is not integral to the practice of Islam and Whether the All India Muslim Personal Law Board and similar associations have the authority to determine and declare the personal law applicable in India for the numerous sects and sub-communities of Islam that exist in India and practice Islam in various ways.