The Supreme Court on Tuesday set aside triple talaq as unconstitutional. Credit: Reuters 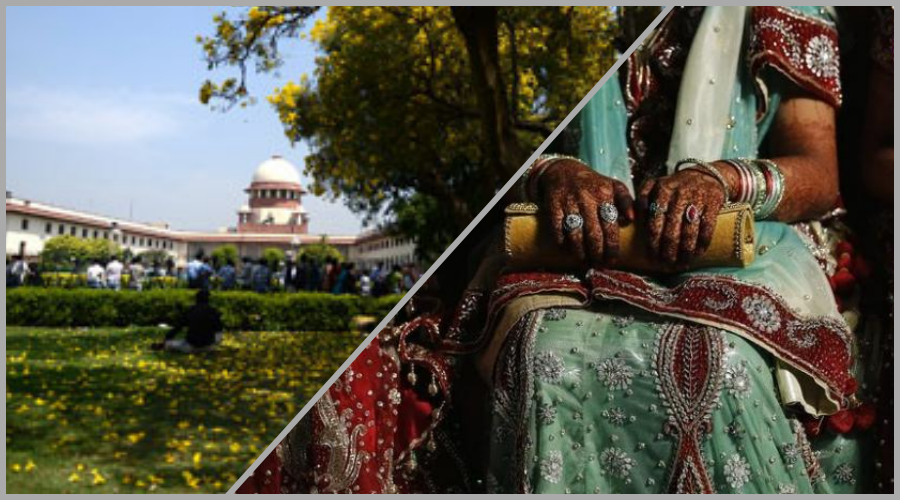 The Supreme Court on Tuesday set aside triple talaq as unconstitutional. Credit: Reuters

New Delhi: In a landmark judgment, the Supreme Court on Tuesday set aside the instant triple talaq or talaq-e-biddat system of divorce followed by Sunni Muslims under personal law as unconstitutional.

A five-judge bench comprising Chief Justice J.S. Khehar and Justices Kurian Joseph, Rohinton F. Nariman, Uday U. Lalit and S.A. Abdul Nazeer, in a 395-page verdict by a majority of 3:2, held that instant triple talaq is unconstitutional, arbitrary and unreasonable. In a batch of petitions, the affected Muslim women had challenged the validity of instant triple talaq on the grounds that it violated their fundamental right to equality.

The chief justice said the practice of triple talaq has to be considered integral to the religious denomination in question; it is part of their personal law and cannot be tinkered with by the court. Any change in personal law can be done only through parliamentary legislation, the minority opinion said.

What the majority said

Justice Nariman said triple talaq does not fall within the sanction of the Quran. Even assuming that it forms part of the Quran, Hadis or Ijmaa, it is not something that is “commanded”. Talaq itself is not a recommended action and therefore, he argued, triple talaq will not fall within the category of sanction ordained by the Quran. While the practice is permissible in the Hanafi jurisprudence, that very jurisprudence castigates triple talaq as being sinful, he wrote.

Justice Nariman said a practice that is manifestly arbitrary is obviously unreasonable and, being contrary to the rule of law, would violate Article 14 of the constitution. If an action is found to be arbitrary and unreasonable, it would negate the equal protection of the law contained in Article 14 and would be struck down on this ground. Pointing out that triple talaq is sanctioned under the Muslim Personal Law (Shariat) Application Act, 1937, Justice Nariman said it is constitutionally invalid. He said,

“Divorce breaks the marital tie which is fundamental to family life in Islam. Not only does it disrupt the marital tie between man and woman, but it has severe psychological and other repercussions on the children from such marriage.

…After the advent of Islam, divorce was permitted to a man if his wife by her indocility or bad character renders marital life impossible. In the absence of good reason, no man can justify a divorce for he then draws upon himself the curse of God. Indeed, Prophet Mahomed had declared divorce to be the most disliked of lawful things in the sight of God. The reason for this is not far to seek. It is clear, therefore, that Triple Talaq forms no part of Article 25(1) of the Constitution.

…This being the case, the submission on behalf of the Muslim Personal Board that the ball must be bounced back to the legislature does not at all arise in that Article 25(2)(b) would only apply if a particular religious practice is first covered under Article 25(1) of the Constitution.

…If a constitutional infirmity is found, Article 14 will interdict such infirmity. Positively speaking, it should conform to norms, which are rational, informed with reason and guided by public interest, etc. Applying the test of manifest arbitrariness to the case at hand, it is clear that Triple Talaq is a form of Talaq which is itself considered to be something innovative, namely, that it is not in the Sunna, being an irregular or heretical form of Talaq. Given the fact that Triple Talaq is instant and irrevocable, it is obvious that any attempt at reconciliation between the husband and wife by two arbiters from their families, which is essential to save the marital tie, cannot ever take place. It is clear that this form of Talaq is manifestly arbitrary in the sense that the marital tie can be broken capriciously and whimsically by a Muslim man without any attempt at reconciliation so as to save it.

…In our opinion, therefore, the 1937 Shariat Act, insofar as it seeks to recognize and enforce Triple Talaq, is within the meaning of the expression “laws in force” in Article 13(1) of the Constitution and must be struck down as being void to the extent that it recognizes and enforces Triple Talaq.”

Justice Joseph, supporting Justice Nariman’s judgment, said, “What is held to be bad in the Holy Quran cannot be good in Shariat and, in that sense, what is bad in theology is bad in law as well.”

“Merely because a practice has continued for long, that by itself cannot make it valid if it has been expressly declared to be impermissible. The whole purpose of the 1937 Act was to declare Shariat as the rule of decision and to discontinue anti-Shariat practices with respect to subjects enumerated in Section 2, which include talaq. Therefore, in any case, after the introduction of the 1937 Act, no practice against the tenets of Quran is permissible. Hence, there cannot be any Constitutional protection to such a practice.”

He said the simple question that needs to be answered in this case is only whether triple talaq has any legal sanctity.

“The Holy Quran has attributed sanctity and permanence to matrimony. However, in extremely unavoidable situations, talaq is permissible. But an attempt for reconciliation and if it succeeds, then revocation are the Quranic essential steps before talaq attains finality. In triple talaq, this door is closed, hence, triple talaq is against the basic tenets of the Holy Quran and consequently, it violates Shariat. Therefore, in any case, after the introduction of the 1937 Shariat Act, no practice against the tenets of Quran is permissible. Hence, there cannot be any Constitutional protection to such a practice. When issues of such nature come to the forefront, the discourse often takes the form of pitting religion against other constitutional rights.”

The chief justice said the practice of talaq-e-biddat is a constituent of personal law and hence has a stature equal to other fundamental rights conferred in part three of the constitution.

“The practice which is in existence and accepted by all for over 1,400 years cannot therefore be set aside, on the ground of being violative of the concept of the constitutional morality, through judicial intervention. Reforms to ‘personal law’ in India, with reference to socially unacceptable practices in different religions, have come about only by way of legislative intervention.”

Chief Justice Khehar, however, wanted the practice to be stayed for six months. He said till such time as legislation on the matter is considered,

“We are satisfied in injuncting Muslim husbands, from pronouncing ‘talaq-e-biddat’ as a means for severing their matrimonial relationship. The instant injunction, shall in the first instance, be operative for a period of six months. If the legislative process commences before the expiry of the period of six months, and a positive decision emerges towards redefining ‘talaq-ebiddat’ (three pronouncements of ‘talaq’, at one and the same time) – as one, or alternatively, if it is decided that the practice of ‘talaq-e-biddat’ be done away with altogether, the injunction would continue, till legislation is finally enacted. Failing which, the injunction shall cease to operate.

…The practice of ‘talaq-e-biddat’ being a constituent of ‘personal law’ has a stature equal to other fundamental rights, conferred in Part III of the Constitution. The practice cannot therefore be set aside, on the ground of being violative of the concept of the constitutional morality, through judicial intervention. Reforms to ‘personal law’ in India, with reference to socially unacceptable practices in different religions, have come about only by way of legislative intervention. Such legislative intervention is permissible under Articles 25(2) of the Constitution. The said procedure alone need to be followed with reference to the practice of ‘talaq-e-biddat’, if the same is to be set aside.

…International conventions and declarations are of no avail in the present controversy, because the practice of ‘talaq-e-biddat’, is a component of ‘personal law’ the whole nation seems to be up in arms. There is seemingly an overwhelming majority of Muslim-women, demanding that the practice of talaq-e-biddat’ which is sinful in theology, be declared as impermissible in law. The Union of India, has also participated in the debate. It has adopted an aggressive posture, seeking the invalidation of the practice by canvassing, that it violates the fundamental rights enshrined in Part III of the Constitution, and by further asserting, that it even violates constitutional morality.

…During the course of hearing, the issue was hotly canvassed in the media. Most of the views expressed in erudite articles on the subject, hugely affirmed that the practice was demeaning. Interestingly even during the course of hearing, learned counsel appearing for the rival parties, were in agreement, and described the practice of ‘talaq-e-biddat’ differently as, unpleasant, distasteful and unsavory. The position adopted by others was harsher, they considered it as disgusting, loathsome and obnoxious. So religion is a matter of faith, and not of logic. It is not open to a court to accept an egalitarian approach, over a practice, which constitutes personal law.”