Veteran feminist Selma James talks about the need for wages for housework, women’s struggle for pay equity and how waged caring labour is fundamental to women’s economic autonomy. 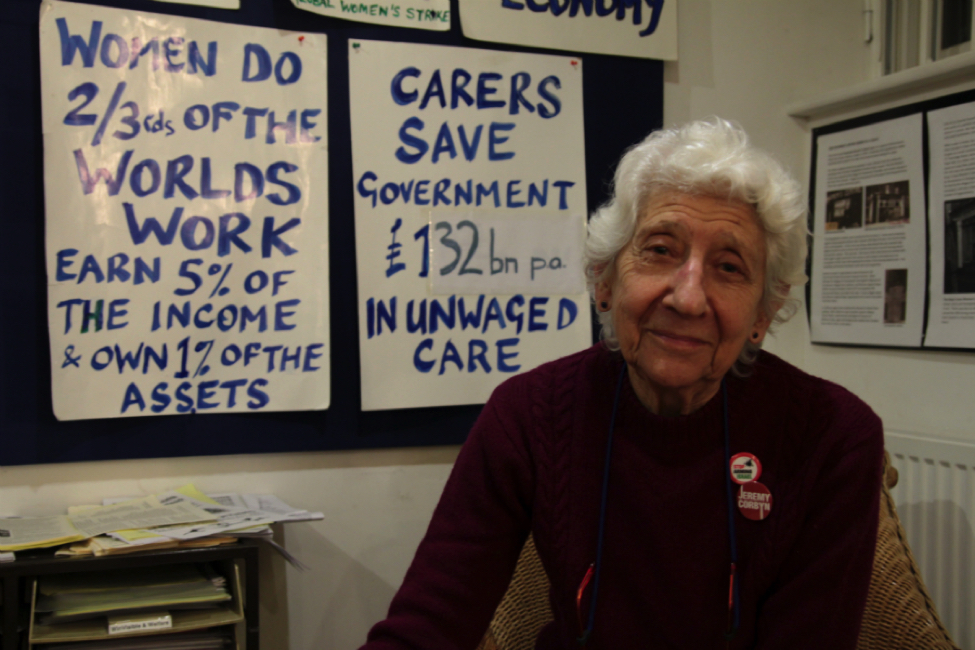 Theresa May, in her debut speech as the prime minister of UK, stated that she was committed to fighting the gender pay gap. But the latest figures by UK-based Women’s Budget Group predict that women will be twice as affected by the pay gap, losing double the money as men due to tax and benefit changes from 2010. I meet with Selma James, founder of the Wages for Housework campaign, at the Crossroads Women’s Centre (which began as a squat for the women’s movement in 1975), to discuss the need for wages for caring labour, that might help bridge the gap.

James walks into the room and gives me a hug: I am not expecting this; partly because I am over-awed by the legacy of her activism and partly because I had expected her to sneer at a 20-something feminist out to interview a veteran who has hung out with the likes of Angela Davis and Fred Hampton. James had called me back personally upon receiving my interview request and although our interview had been postponed twice, she had profusely apologised both times. The second time, upon being asked to show up, I had accidentally crashed a birthday party and been invited in to eat ice cream with the members of Crossroads Women’s Centre, where James works. “We really mean it, help yourself,” she says, pushing the plate towards me, much to my embarrassment. In the feminist circuit, James is something of a legend due to her seminal work, A Woman’s Place, which focused on the daily lives of women with respect to surrounding relationships and the agency afforded to women.

The need for wages for housework

When the Wages for Housework (WFH) campaign exploded onto the international feminist stage, it sparked the first debate on unwaged care work that women are forced into due to the social roles they are expected to perform. It demanded money from the state as compensation for the labour that was not merely a “role” that women were performing, but formed the backbone of the economy due to the physical and emotional investment made by women into housework.

“All I knew was that the basic weakness of women was that we did work that was unwaged and that payment for that work was absolutely central to our autonomy – to our right to have children and our right not to have children, to pay equity,” says James.

It was the 1972 seminal publication, The Power of Women and the Subversion of the Community, co-written with the feminist Mariarosa Dalla Costa, that first theorised housework and caring work as unwaged labour that women are forced to do; the very labour whose output supports the working class and through it, the market economy. Soon after, James launched into praxis.

However, her plan had very little shape in the beginning: “The campaign for Wages for Housework has been very different from what I imagined, because we didn’t know how to put it into practice except as a general demand. It is a political perspective that can be used in all kinds of ways. For example, we know that women are the object of rape in domestic situations because we haven’t got the money to run away, to defend ourselves and our children. Right now, the whole question of caring work has exploded among feminists: we were the first ones to raise that.”

In fact, in May 2015, the tongue-in-cheek Twitter hashtag #GiveYourMoneyToWomen went viral. Initiated by Lauren Chief Elk, it highlighted how women’s time and attention is often taken for granted, and suggested that if it were in such high demand, perhaps it deserved to be paid for.

When WFH was first introduced, the campaign met with criticism centred around whether domestic work was a role or work. “Women in third-world countries never had a problem with wages for housework. They understood it immediately because the question of money was not mystified. If you didn’t have it, you didn’t have the power of it, and you needed it. Not only to defend yourself from men, but to defend men, which is what women were also doing; when men were being persecuted, women had campaigns against false arrests, against stop and search, deportation,” she adds.

The question of pay equity, James argues, is based on women being able to refuse jobs with low pay. Therefore, if women had an income from caring responsibility, they had the right to say no to employers. Virginia Woolf, one of her favourite writers, wrote about this extensively in A Room Of One’s Own: how women were kept from writing what they wanted because of the poverty they were forced into due to the lack of a basic income.

Silvia Federici, one of the key founders of the WFH movement along with James, defined in 1975 how unwaged housework enslaved women:

“[N]ot only has housework been imposed on women, but it has been transformed into a natural attribute of our female physique and personality, an internal need, an aspiration, supposedly coming from the depth of our female character. Housework had to be transformed into a natural attribute rather than be recognised as a social contract because from the beginning of capital’s scheme for women this work was destined to be unwaged. Capital had to convince us that it is a natural, unavoidable and even fulfilling activity to make us accept our unwaged work.”

A poster at the centre makes the argument for child benefits. Credit: Manisha Ganguly

James begins gushing as she mentions Eleanor Rathbone and achieving the goals of WFH. “Nobody knew the need for wages for caring labour more than her: she fought and won.” An independent British MP and suffragette, Rathbone had campaigned for family allowance (now known as child benefit), which passed into an Act in 1945, the year before her death.

“I really do believe that to have a parent in the movement for social change is a great education for children,” says James, about her upbringing. Her father, a truck driver, was a trade unionist. “A crucial part of education is how your situation relates to those of others. Otherwise you get an enormous ego: you think you’re special, unique and of course you are special and unique, but you’re also not unique because you’re suffering as others suffer and have joy as others do. It keeps your ego in control. This is important when the 1% is very anxious for you to think of yourself as unique to control you. They want you to strive against everyone – competition is good they say from the moment you begin to breathe it seems. I think working collectively with other people is a very good basis individuality.”

When James was 15, she joined the the Johnson Forest Tendency, a splinter group of the Workers Party in the US. “I wanted to be involved in a political organisation – I went to a few and didn’t think people were very nice. Johnson Forest had a perspective of working class people being able to win despite the forces against us. I thought, that’s the only thing that makes sense to me, otherwise why would I be here if I didn’t expect to win?” she laughs, before looking alarmed and asking me how I knew all this information about her youth.

Johnson Forest changed her views on racism, especially mixed-race relationships, as her relationship with C.L.R James, a Trinidadian activist, progressed into marriage. “I had grown up in a mainly black neighbourhood and I was just as racist as any other white person. Johnson Forest helped me because we talked about the civil war in US and the ending of slavery and I got a sense of how history was made and how people risked everything for their freedom: you respect people who do that and it clearly overcomes a lot of your racism,” she smiles. 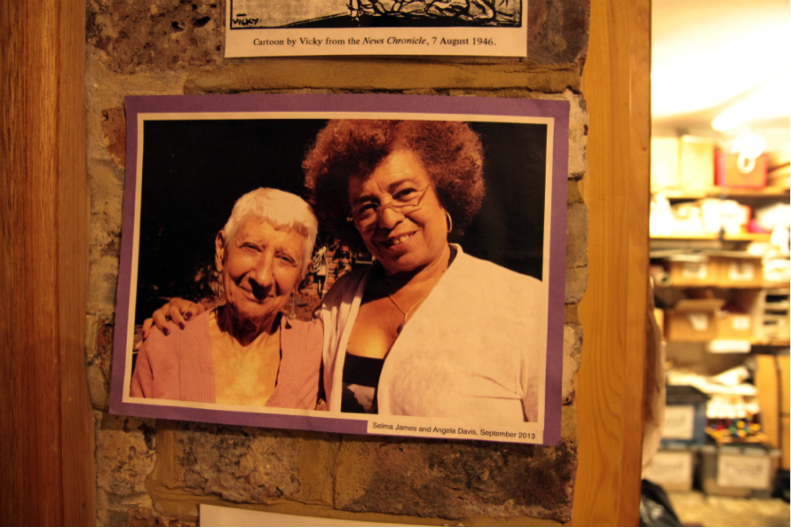 We are, however, further away from realising her dream of women’s right in the form of pay equity and wages for housework than ever before. “The election of [Donald] Trump indicates that we’re far from any kind of liberation. On the other hand, there are massive movements that have been happening in the US led by Bernie Sanders and here headed by [Jeremy] Corbyn,” she pauses to point to the Corbyn badge pinned to the front of her sweater. “We don’t know which way it’s going to swing – only that the right and left wings will have a confrontation,” she frowns, before adding that with the impending Brexit, it is essential for women to organise collectively and fight back as they have always done at the centre.

Crossroads and the fight that continues

Crossroads Women’s Centre began as a squat in 1975 that was later evicted in 1978. In response to the eviction, a group of women of all races, ages and class occupied Camden Town Hall in protest. According to the history given on their website, one of the women “chained herself to the first floor balcony and dramatically unfolded yards and yards of a petition with thousands of signatures demanding a women’s centre”. The centre was finally granted property near King’s Cross and was King’s Cross Women’s Centre for 17 years before finally moving to its location in Kentish Town, aptly renamed Crossroads. “It’s an area where women and men can always come and bring their problems. The basis is self-help and there are ways in which we organise with people who are ready to do the work. If they’re not ready to do the work, we give them a nice cup of tea and we say goodbye. It’s only on the basis of self-help, otherwise you invite a power relation that is objectionable to us,” explains James.

When I ask her about her most significant victory at the centre, she excitedly tells me, “The time we screamed the loudest with pleasure was when we won a court case against a man who had raped two sex workers.” In 1995, the Crown Prosecution had decided not to prosecute the accused Christopher Davies, who was later found guilty of rape and sentenced to 14 years of jailtime, reduced on appeal to 11 years. The English Collective of Prostitutes, Women Against Rape and Legal Action for Women arranged for a private prosecution at Maidstone Crown Court.

“We filled the seats everyday. Dozens of women went to hear the case, and the judge and jury were very aware of the fact that the court was full of women.” After the hearing was over, James and the women were in Beijing, attending a UN conference, when the ruling came out. The judge had told the accused, “This was an extremely serious rape and you remain a danger to women”. James recalls, “We just began to scream our lungs out and everyone thought we had gone mad. But we were confirmed – we had stopped him from raping others. We had proven that sex workers could be believed. We were all thrilled and we were thrilled that we were all thrilled – it was such a collective emotion,” says James, beaming. “A play was later made out of the transcript of the case, put up at Crossroads Women’s Centre and other local theatres in London.”

At 86, James is remarkably optimistic. She refuses to give in to activism burnout. “The struggle keeps you going. We always count our victories and see what we won when others don’t. We look around at this centre and say, look at what we’ve done”.