"A man’s job is to make money – masculinity is his quality, whereas a woman’s quality is motherhood. She should never forget that." 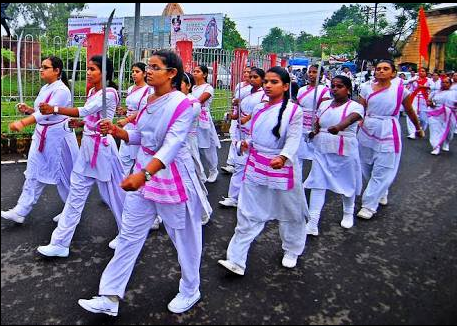 A 15-day summer camp for girls organised in Delhi by the Rashtriya Sevika Samiti, the women’s wing of the RSS, included an unusual mix of activities and messages. According a report in the Indian Express, more than 50 school-going girls were taught to use knives, sticks and swords, and also told that being a good mother and a good wife are essential parts of a woman’s identity.

At the culmination of the training camp, the newspaper reported, the girls, clad in white salwar-kameezes with saffron ribbons around their waist, brandished swords and laathis, performed yoga aasanas and chanted “Bharat maata ki jai!” in front of an audience of parents and family members.

“This is the goal of the sanstha,” Rashtriya Sevika Samiti’s uttar shetra karyavahika Chandrakantha, chief guest at the event, told Indian Express. “We teach the girls to be fully empowered and equipped – that is, physically, mentally and spiritually strong, so that a girl is capable of protecting herself and is able to guard her country, its traditions, its sanskriti and its languages. The samiti instills pride for the nation in her.”

And the ultimate goal for women is motherhood, she concludes, while for men it is to make money: “Purush ka hai bahar ka kaam karna, dhann ka kaam karna – paurush uska gunn hai. Sritiva, matritav ka gunn hai. Uss gunn ko aurat ko kabhi nahin bhoolna chahiye (A man’s job is to make money – masculinity is his quality, whereas a woman’s quality is motherhood. She should never forget that).”

“Maata nirmata bhaviti hai, ma chahe toh nar se narayan bana sakti hai, ma chahe toh vidhwansak bana sakti hai (A mother is the ultimate creator. If she wants, she can bring up her child to be a saint or a destroyer).” Shivaji’s mother Jijabai Shahaji Bhosale, she said, is someone they should aspire to be like. “Unhone Shivaji ka nirmaan uss samay kiya jab, apne aap ko koi Hindu kahi hi nahin sakta tha. Uss samay Jija maa ne Shivaji ko taiyaar kiya, jisne apni buddhi aur chaturiya se, Hindu samrajaya ki sthapana ki (She brought up Shivaji at a time when no one could call himself a Hindu. At that time, she trained Shivaji in such a way fight, that he used his intelligence to to establish the Hindu empire).”

Of course this isn’t the first time that the Rashtriya Sevika Samiti has said things about a women’s place in society. In November last year, the general secretary of the organisation Seetha Annadanam said marital rape is not real – a marriage is sacred and therefore cannot involve rape. Pracharikas of the organisation also reportedly played in role in trafficking young girls from Assam to North India, on the pretext of getting them a good education.

According to the Indian Express, the women’s organisation’s shakhas have increased from 2,130 in 2011 to 2,784 in 2016. These shakhas are seen as having a model for the “new-age” woman, where they organise events, play sports and learn self-defence, while also aligning themselves to an ideology that perceives a woman’s role to be within a household, supporting the men in her life.