Finding the Right Materials for Buildings of the Future

A civil engineer at IIT Guwahati talks about her research on lightweight concrete. 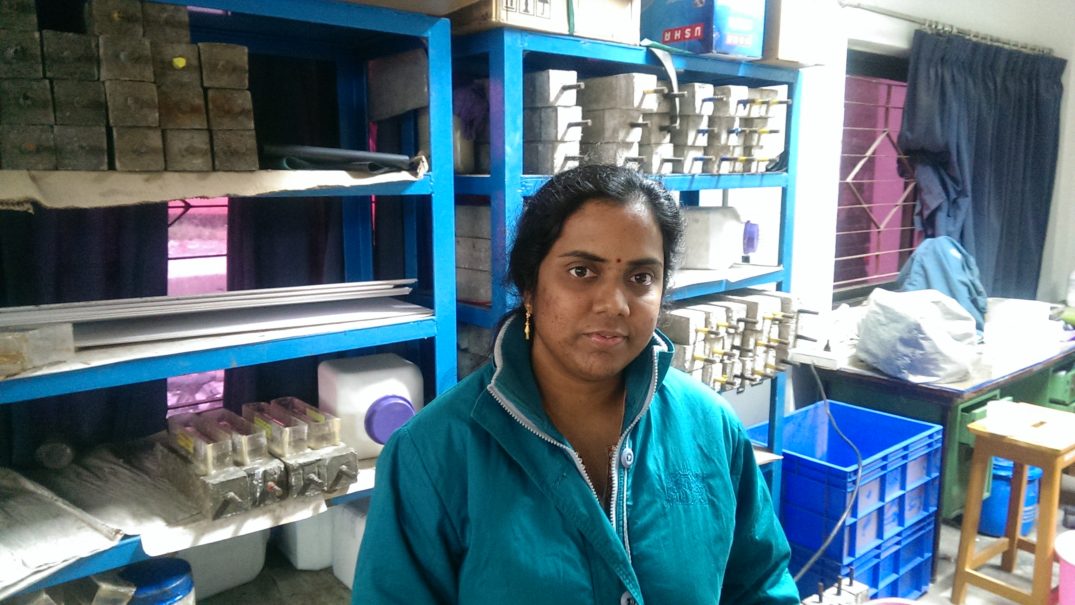 It was a sunny but chilly day in Guwahati. Only a week into a new semester, the mood at Indian Institute of Technology, Guwahati (IITG) was laid back. At its centre the “Serpentine Lake” glistened in the winter sun. It’s no wonder the sprawling IITG campus is considered one of the most beautiful in the country.

Four years ago, when Indu Siva Ranjani walked into this campus for the first time, everything was completely new and possibly a bit overwhelming. The civil engineer had just taken up a coveted faculty position in the institute; this was the first time she was ever venturing out of her hometown Chennai. “Here it is very difficult to survive without Hindi,” she told me regretfully, as she hung up on a phone call. Her Hindi had sounded better than mine but as a South Indian who has had Hindi thrust upon her so often, I empathised wholeheartedly.

Ranjani had rebelled with many to come all the way to Guwahati. She had no doubt that the IIT atmosphere would be ideal for her to foster her research. She wasted no time in getting started on her project to develop better building materials for Indian construction. 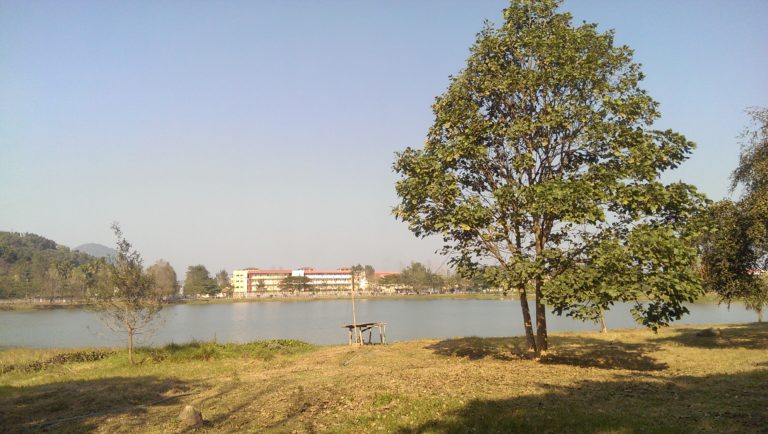 Our buildings have a problem

“Thanks to climate change, artificial heating and cooling of most buildings has now become mandatory. We spend lots and lots of energy to do this,” said Ranjani, introducing me to the need for her research. Ranjani is not kidding. According to an article on The Verge published in September 2017, by 2030, the world will have 700 million more ACs and by 2050 there will be 1.6 billion more. A bulk of these will be in hot, developing countries like India and Indonesia.

This brings with it the looming problem of increased energy consumption, and for a fossil-fuel dependent nation like ours, this is worsening climate change. Civil engineers like Ranjani aim to lessen this energy consumption by looking at construction alternatives. The materials used to construct a building determine how well the structure will conduct heat and consequently its energy consumption.

Ranjani explained to me how one of the most important properties in this regard is thermal insulation. Using materials that are thermally insulating ensure that the occupants of the building enjoy optimum thermal comfort. This is because unwanted heat loss and heat gain are reduced, thereby minimising the use of heaters and ACs.

“If we use porous material instead of bricks to construct buildings, heat transfer won’t happen easily,” she said. Ranjani is currently working on developing a kind of concrete that will satisfy these conditions. Moreover, Ranjani is adamant that her product be sustainable too. “We want to make use of industrial waste for to make this material.”

So how does one make concrete porous? Foam, replied Indu. “We test chemicals that are surfactants (they generate foam) such as sodium lauryl sulphate. SLS is really common – you can find it in detergents, shampoos… We tried to use it in concrete. The foam it generates has to be stable long enough for the concrete to set.” If all goes well, Ranjani will have a block of porous concrete.

Lightweight concrete is already being used for construction abroad but it’s not practical to import the material made abroad. “Importing is costly so we want to reduce the cost by using locally available material. SLS is cheaply available so we tried that.” The results are encouraging. “We have made specimens whose density is lesser than 1,000kg/metre-cube. Some of these float on water! This shows that the chemical is efficient,” said Ranjani. 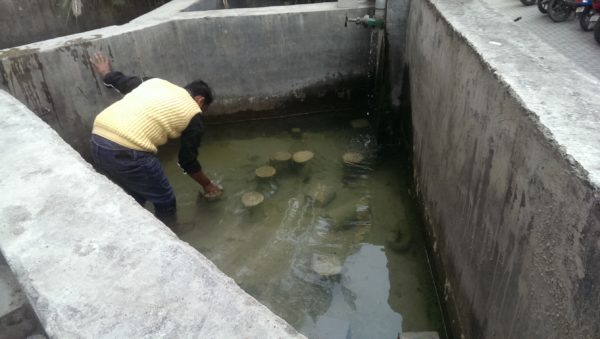 A member of Ranjani’s team picks out a concrete block to show me. Credit: The Life of Science

Autoclaved Aerated Concrete (AAC) blocks are a type of porous concrete that is already commercially available; however, it’s expensive and according to Ranjani, the technology is not very user-friendly. Also, AAC can be brittle. “We want a better version, a higher level of lightweight concrete where the strength won’t be a problem. We want to be able to use this material even for structural (which refers to structures like bridges and flyovers) and semi-structural construction. Right now it can only be used for non-structural construction where the walls are not intended to carry huge amounts of load.”

Indeed, the major caveat of such concrete is strength. Ranjani aims to make indigenous lightweight concrete, but without compromising too much on strength. “The strength was the limitation of my earlier work at IIT Madras. Now I have to add more additives to achieve at least reasonable strength. It is possible… it has been done in foreign countries. We are trying to do this here.”

This area of civil engineering research is still relatively new in India and according to Ranjani, being pursued only in very few IITs. “The facilities at IIT Madras are fully established, but here in Guwahati, we have just started. My own facility is being developed. We have to see how it goes.” 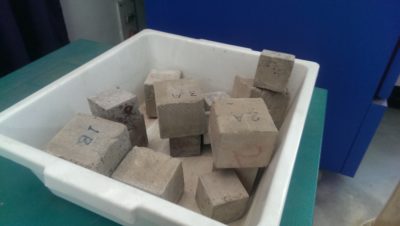 Making the most of plan B

Ranjani’s foray into this field was not a planned decision. Brought up in Chennai along with her two elder siblings, Ranjani’s engineer father dreamt of seeing all three of his children as doctors. “Both my siblings got admission in very good medical colleges – they were my role models, but I only managed to get a seat in a dental college.” Though she was disappointed, she did not follow her father’s advice to wait another year and try again. “I had gotten admission at Anna University’s College of Engineering. In those days, there was a craze for this college. I was sure I wanted to stay in Chennai with my family so I took up the branch I got, which was civil engineering.”

Though she sort of stumbled into it, engineering did not take long to enamour Ranjani. She recalls there being many girls in her class and many of them chose to go abroad after their bachelor’s. Indu did not have that option. “My family did not permit me to go abroad,” she explained. She did not want to start working either. “I thought it would be very difficult for me to survive in the construction industry. You see, a civil engineer – he should be bold enough to demand work from labourers. At the time, I was not brave to do this,” she said. “Of course, now I have to face this crowd everyday,” she chuckled.

So Ranjani decided that teaching would be a more compatible profession. She began an MTech course in construction engineering and management at the same college. It was during her MTech project at CSIR-Structural Engineering Research Centre in Chennai that her inclination for research became apparent. That was also the time Ranjani began to shed her timid nature. “My fears went… I developed the courage to face people and do presentations. Right after MTech I got into IIT Madras for a PhD.”

At IITM, she began her research on foam concrete and went on to publish four articles in international journals. But her PhD experience was not smooth sailing. “I took quite a long time – about seven years. This was because I had lots of constraints – I got married, I had a child. I had to take a break in between, but somehow I completed it.”

Belief in the IIT culture

When the time came to start looking for faculty positions, Ranjani did not even try to look at the IITs. “The old IITs like IITM are saturated. If I had applied, I would have had to leave Chennai and my family would be separated,” she said. So she joined a private college in Chennai instead. “This was my first experience being in a private college. Though I did research there too, the work environment there was totally different from IIT. It was difficult for me to concentrate as much on research. And in IITs, the students are mostly merit-based; they really support us a lot – and in research everything is teamwork.” 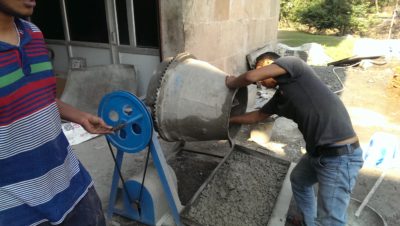 After three years teaching at the private college, Ranjani knew she had to move on, for the sake of her research – even if it meant moving away from her family. So after spending the first three decades of her life rooted to her hometown, the civil engineer took the big decision to break away. IIT Guwahati was calling her name.

Ranjani’s plan was met with a fair amount of resistance. “Everyone except my husband hesitated. They were not willing to send me this far away,” she said. But Ranjani stood steadfast in her decision. “I was so sure because I knew what the IIT work culture was like. I knew it would suit me.”

For three years, Ranjani stayed all alone in this new land along with her young son. Despite the separation, Ranjani was content that her research was finally being allowed to flourish.

Only late last year was her husband and younger daughter able to reunite with her. “I really suffered a lot being separated from my daughter who was not even a year old at the time. Every two months, the family had to fly here and there so we could be together. Still, the thought of resigning this job never entered my mind,” she said.

“Now we are all here and things are very comfortable.”

On sites, I am seeing more and more commanding women. My husband who works in the industry tells me the same. I used to think that I would not survive in the construction field and that I’m fit only for academics but this has changed. There are no safety issues. It just depends on the exposure we have got… we should come out (move out of home). The only thing is that we need to be more confident than men. By nature, women are more powerful – that, I know. Whatever task they do, they do sincerely – I see this all the time so I feel women are suitable for all kinds of jobs.