Confined for years to the role of playing matchmaker and overlooked for everything else, the community today wants to step out and make more of life. 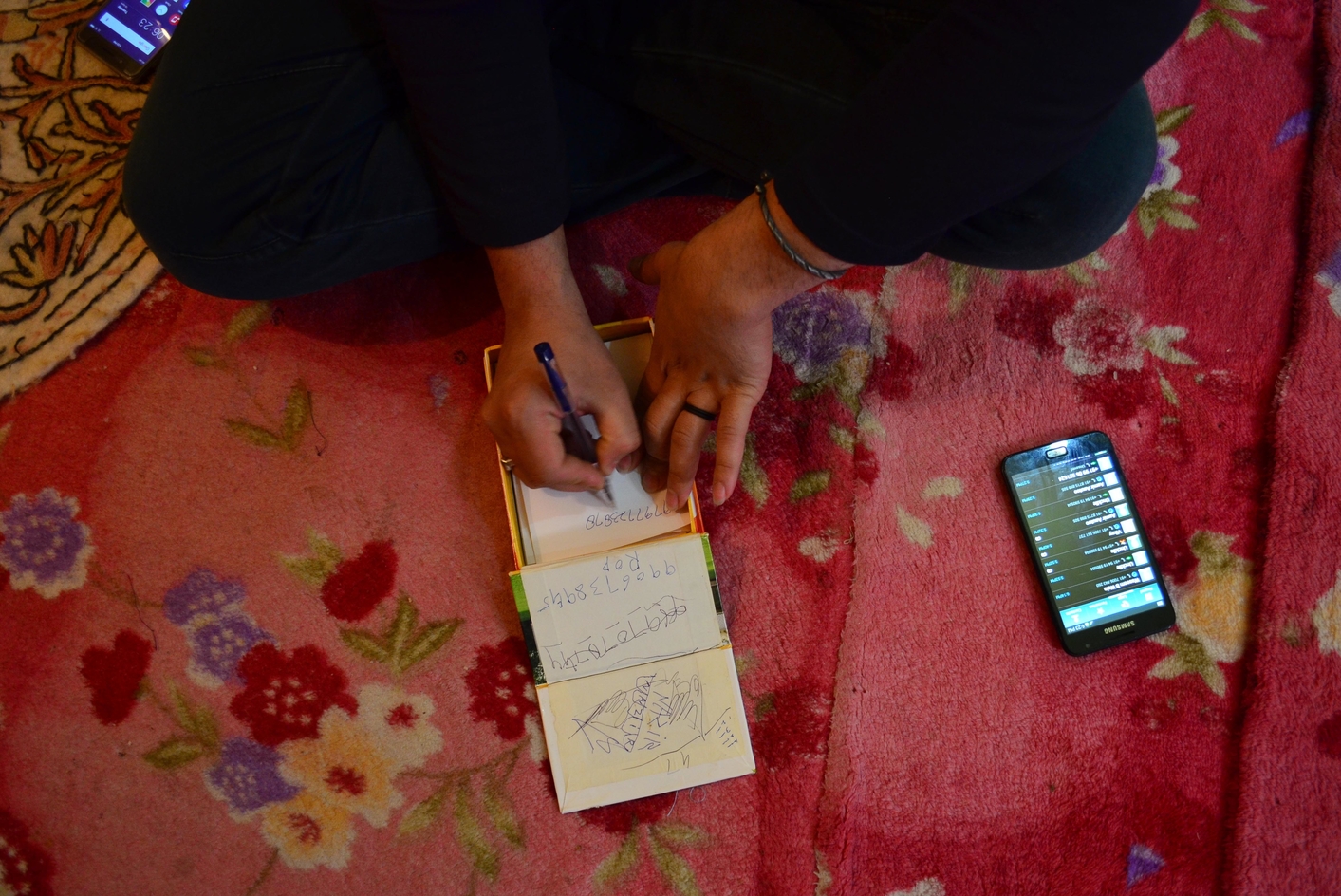 Writing down the details of a client. Credit: Syed Shahriyar

Srinagar: Every Friday, Mohsina and Omaira, both in their early 20s, meet before afternoon prayers at Nazir Ahmed’s house in Dalgate, an old neighbourhood in Srinagar, where they are joined by a few others, including Amin. All of them then offer prayers before settling down to endless rounds of tea, and conversations about life, death, love and everything in between.

Friday is the only day they get to meet. The rest of the week they work as ‘matchmakers’ – a gender-specific job assigned to transgender people in Kashmir – or perform at weddings. Although, as more and more people are finding partners for themselves, Omaira feels there is no future in the matchmaking business. Both she and Mohsina have tried to get a job at a parlour, but nobody was willing to hire them.

Omaira and Mohsina met only a few months ago and struck up a good rapport, given that they are of a similar age. They even look different from the others in the group, and their way of thinking is different too. The others in the group like Nazir, 42, and Amin, 48, are much older and wear the traditional Kashmiri attire for men (Khan dress), with the length of their hair till their ears. Omaira and Mohsina, on the other hand, have long hair and wear jeans and t-shirts. They wanted more from life than to fix marriages; they wanted to study further and get better jobs. 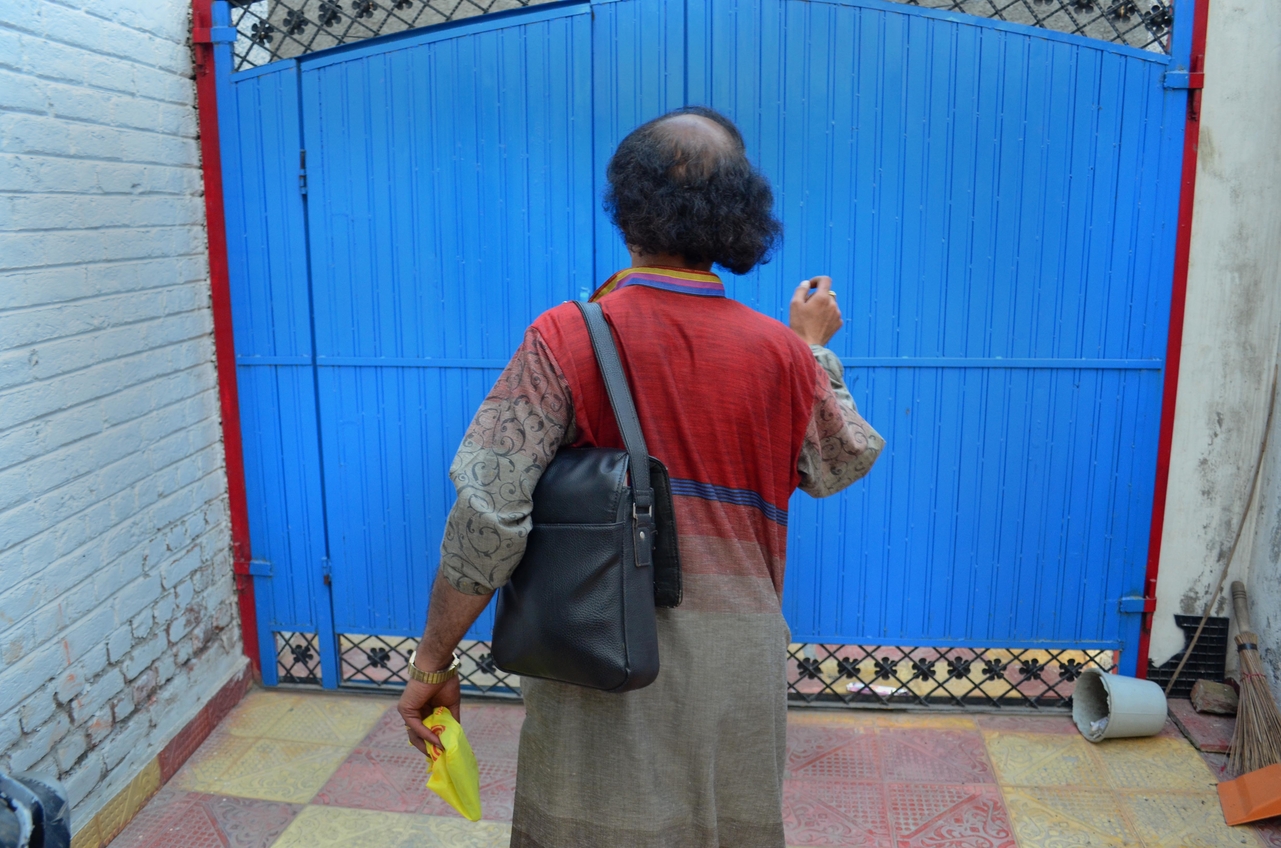 Mohsina has studied till the 12th grade before she decided to quit, “I wanted to do hotel management after school but I wasn’t comfortable with being in a place where I had to pretend to be someone I wasn’t,” she said. “I chose to be a matchmaker instead, because with them I can be myself without the fear of being judged.” Her parents are not happy with her work, her long hair, or the clothes she chooses to wear, but they have accepted the way she wants to live her life.

Omaira did not have much option but to quit school after qualifying for the 10th grade. She says she didn’t feel right at school after that year, and her family did not help either. Her father and elder brother stopped talking to her after she was found dressing in her mother’s clothes and wearing her make-up.

Omaira hopes to work as a beautician in Mumbai some day. She says her friends on Facebook have asked her to go to the city and try her luck. “My mother has always stood behind me. She says I am a gift. She lets me out when my father and brother are not home, and makes excuses for me all the time. I cannot leave her and go, moving to Mumbai needs more planning,” she said.

Nazir has been working as a matchmaker for over 20 years and has helped fix over a hundred marriages. Most big families in the Valley know Nazir, but Nazir’s own family has not stayed in touch with the matchmaker. For years after coming out to the family, Nazir didn’t speak to family members. Despite some difficulties with finding a place, the matchmaker was able to rent a house for a while, before moving to another place after Nazir’s parents died. Now, Nazir’s elder brother visits once in a while.

“These kids (Omaira and Mohsina) are lucky that their families have not shunned them, at least not yet. It’s easy living on your own when everyone is hostile towards you, suspicious of who you are, even if they don’t have the courage to ask you,” said Nazir.

In September 2014, after the Supreme Court ruled in favour of recognising the third gender, the Jammu and Kashmir government formed a high-level panel headed by the chief secretary to formulate policies for the welfare of transgender people in the state. The panel, which was to come up with policies to provide equal opportunities to transgender people, is yet to make any recommendations. The ongoing political uncertainty in the Valley has perhaps pushed the rights of the marginalised community further down everyone’s priority list.

In Kashmir’s conservative society, the transgender community has been in the profession of matchmaking for decades. This role not only provides them employment, but also gives them a social sanction, and they are treated much better when they attend the weddings they helped fix. Outside of this, they face the same prejudices and discrimination as every else in the world. With no policies to safeguard their rights, education or employment, matchmaking and performing at weddings has been their main livelihood.

Writing down the details of a client. Credit: Syed Shahriyar

“A transgender person still can’t get admission in any education institute in Kashmir and there is no chance for them to get a job. So they have to stick to the societally assigned job of matchmaking to survive,” Wakar Amin, assistant professor at Kashmir University’s social works department, said, adding, “They are the part of our society that we have consciously overlooked, leaving them vulnerable.”

Social activists, including Kashmiri poet Zareef Ahmed Zareef, say transgender people have been assigned the job of matchmaking in the Valley since the Mughal era. “Since they had feminine inclinations, it was thought that they should stay away from jobs that men did. Matchmaking was something that involved being around women, so that’s what they were asked to do,” Zareef said.

He says it’s time for Kashmir to accept transgender people as part of their society and ensure they get equal opportunities. “The transgender community has suffered in the ongoing conflict as much as the others. They should not suffer at the hands of their own people as well. We need to do better than that.”

“During the ’90s, transgenders were easy targets of harassment by anyone who held power. Some of them were even killed. Then they started staying indoors and made themselves appear more conservative to blend in. Some also migrated to Jammu out of fear,” Zareef said.