In Riot-Hit Muzaffarnagar, a Beacon for Female Victims of Violence

Women are among the worst hit in rioting. Protecting their rights is Astitva’s mission. 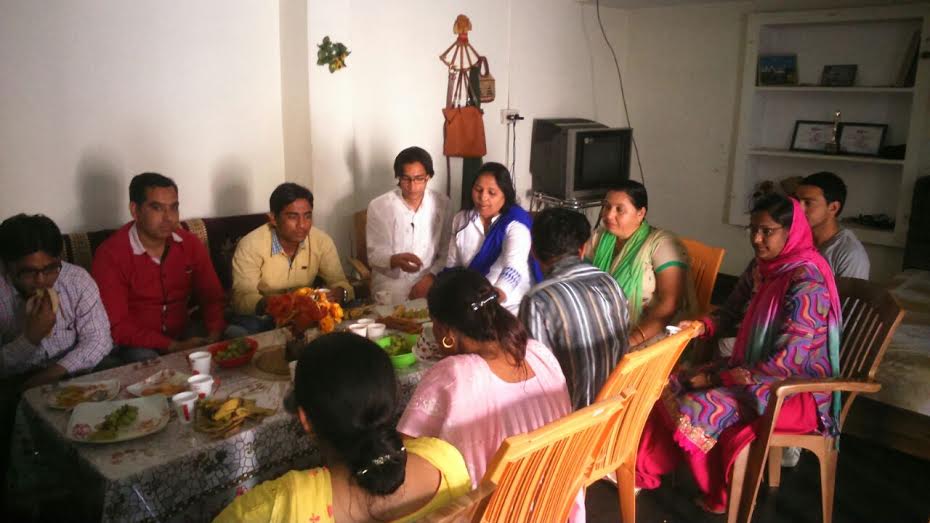 Muzzafarnagar: Rehana Adeeb’s phone won’t stop ringing.  After answering a few calls, she switches off her mobile. “The calls will continue. We won’t be able to talk properly,” she explains.  We are in a nondescript building in Muzaffarnagar district, Western Uttar Pradesh. It functions as an office from where Rehana manages the operations of her NGO Astitva,  one of the few local organisations that worked with people affected by the communal riots of 2013 that broke out in Muzaffarnagar and Shamli districts.

Several files are stacked against a wall with labels like ‘honour killing’, ‘rape’ and ‘domestic violence’ scrawled on the covers. Under Rehana’s guidance, her co-workers Rani, Usman and Gaurav take print-outs, type out emails, and place newspaper clippings in the files.

The recent framing of charges of 4 accused in the Muzaffarnagar gangrape case that happened during the 2013 violence has thrown her work into sharp focus. Astitva has been involved in helping women with legal support in several rape cases that have been registered in the aftermath of the riots.

“I was not always a worldly woman or a person with politics,” says Rehana. She says she had been raped as a child and later forced to drop out of school and married off well before she turned 18. The birth of five daughters in succession and the continued stigma attached to rape meant Rehana’s early years were anything but idyllic. In her late twenties, she strayed into a meeting of Disha, a local women’s rights organisation in Saharanpur in the year 1989.  “Wearing a burqa, with a baby in tow, I attended the meeting where people said women could speak against oppression, lodge an FIR with the police and that it is important not to be ashamed. They were singing revolutionary songs. I felt such tumult that sleep eluded me that night.”

Rehana started attending Disha meetings, embarking on a journey of women’s rights activism. It wasn’t easy. Her efforts were met with beatings in the family and ostracisation by neighbours. Undeterred, she started working with abused women and the government-run Mahila Samakhya programme, and finally established an NGO, Astitva in 2005.  She set up an Astitva office in Muzaffarnagar because she felt the lack of an organisation working on women’s rights in an area which was rife with honour killing and violence against women in the Jat and Muslim communities.

A climate of violence Rehana’s philosophy of working with oppressed women in small towns and villages led her to undertake peace-building work in the run-up to, and following, the Muzaffarnagar riots. “I knew women and children would be crushed in the riots for which the atmosphere was building up.  There were reports of people with beards being roughed up and pushed out of trains, of gun firing outside mosques. We had 8-10 dialogues on communal harmony in Muzaffarnagar, reaching over 2000 people, but these did not have much impact, because we were up against powerful political forces. The local NGOs were reluctant to get involved. Fear was in the air; the police and the army had been deployed, and news about dead bodies was pouring in.”

As a local NGO, Astitva moved swiftly to visit the makeshift camps which emerged to accommodate riot struck families in Muzaffanagar and Shamli. Rehana informed activists and journalists about the desperate situation of the camps and their inhabitants, becoming a point of contact for all those seeking information, such as fact-finding committees and organisations looking to channel relief.  Her team worked with the district administration and panchayats, helped file FIRs for the raped women, trying to fast track their cases, and encouraging women to testify. “In western UP, particularly Muzaffarnagar, there is a tradition of killing witnesses. Therefore witnesses tend to change their stand or they are killed,” says Rehana.

Women’s rights work in western UP is not easy, especially if it means opposing the writ of the khap and caste panchayats. The khap panchayat leaders represent a moneyed and landed class with large-scale ownership of sugarcane fields.  With family members in political parties such as Samajwadi Party and Bharatiya Janata Party, the police force, and the Bharatiya Kisan Union, their authority is difficult to contest. This, combined with frequent violence against women, a preference for guns and abuse over dialogue, and the lack of cultural spaces, greatly limits the possibility of human rights work.

The history of khap panchayats dates to a period well before the Mughal and British rule and is a system which has endured. “Khap panchayat leaders have warned that if anyone attempts to break their authority, they will not be spared.  Even if NGOs are operational, their work revolves around distribution of medicines, and working with children and older people.  Nobody can challenge the khap panchayats.”

No help for vulnerable minorities Folders in which cases relating to domestic violence, sexual violence and rape, and honour killings are kept. Credit: Usman Mehandi

She says that when there is natural disaster, help is readily available, because people feel they are saving human beings.  “But if there is communal rioting and violence in which Muslims or Dalits are affected, people not even counted as human beings, little support can be found. The same sentiment prevails when women are affected – people avoid getting involved.” While Rehana and Astitva cannot afford to confront the khaps and have to skirt around them, they do speak up when women are wronged.

Rehana’s work is subject to frequent threats and hounding.  “An anonymous caller threatened to disfigure my face. Earlier, our premises were in a Jat locality. One day, 15-20 Jats gathered outside and ordered me to vacate, claiming Muslims cannot live there. When I shifted to a Muslim neighbourhood, I was told that not wearing a burqa was unacceptable. ”

She faced threats while working on a case in 2005, in which Imrana, a woman from Muzaffarnagar, was allegedly raped by her father-in-law. Rehana was also beaten up by the police for taking to the streets along with other women in support of former Deoband chairperson Zeenat Naz who battled a fatwa against Muslim women participating in elections.

In addition to being pressed for funds, she finds little support for her work from the district administration and police: “You expect them to stand up against women’s oppression. But that rarely happens.” According to National Crime Records Bureau data of 2013, Uttar Pradesh registered 3050 cases of rape, ranking fourth in the category. It also recorded maximum instances of kidnapping and abduction, and dowry deaths. But many cases remain unreported.

For Rehana, the Muzaffarnagar riots were a planned conspiracy. She says: “The Jat-Muslim alliance is broken, fear prevents many Muslim families from returning to their villages. The atmosphere continues to be communalised, and the newspapers are calling it a silent war on Muslims. People lost, and political parties won.”

Urvashi Sarkar is a freelance journalist and currently works in the development sector. She tweets at @storyandworse.