There is high demand for skilled women in the hospitality trade, but women face stiff familial opposition, right from the moment they enroll in courses. 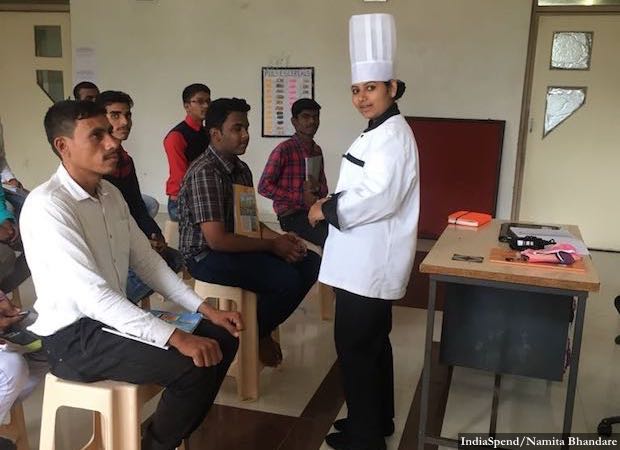 Swati Shinde, an assistant food production trainer at the Pace Hospitality Training Centre, teaches a class that at present has no women students. Swati was married soon after she completed grade VIII but she was soon back home with a newborn son and hasn’t looked back. Today she earns enough for her mother to lead a retired life. Credit: IndiaSpend/Namita Bhandare

Aurangabad: Banudas Sonawane is an angry man: Angry that his eldest daughter, a 19-year-old, joined a hospitality course without his permission. Angry that the girl, Anita, didn’t call home often enough while she was at the two-month long residential course – even though he had given her a paid up SIM card. Angry that the job she was offered after the course was, in his eyes, low in status. Angry that a government job did not come her way.

Most of all, Banudas is angry by an apparent correlation between girls who get jobs and love marriages.

Father of five girls and one boy (the youngest), Banudas drives a truck for a living and is pretty sure of what is going on in the country.

“One of my relatives’ daughter got a job in the police,” he said. “She went off to train to be a constable. The next thing we heard was that she had got married in court. Her parents are shattered and their neighbours don’t talk to them any more.” His wife and 19-year-old daughter bent their heads as they sat quietly in the two-room dwelling in an Aurangabad slum near the rail tracks.

Yet, Sonawane is ambitious for his daughter. “Anything can happen in life, so of course women must be able to stand on their feet and be independent,” he said. But he was just as clear: his daughter would not be a ‘waitress’ in a restaurant.  “If she got a job as a captain or in a government hotel, it would be a different matter,” he said. Since she hadn’t, it was better for her to study and complete her graduation.

Anita Banudas Sonawane didn’t seem to have much of a say in the matter. The job she had turned down came with a salary of Rs 7,000 a month. “Banta nahin (Not viable),” she shrugged. It would be better for her to look for a government job once she completed her graduation – as her father wanted her to do. “If she had failed her class 12, then she would have had to work,” said the father. “Now she has a choice, she can study and get a better job. What sort of a father would I be if I just sent her to get a job without a proper education?”

Anita said she had never really left home until she joined the two-month course run by the Pace Hospitality Training Centre on the outskirts of Aurangabad. The institute is one of 100 in 16 states and across 45 cities run by the Pratham Institute. For the hospitality trade, Pratham has 22 centres across the country. Last year, 9,000 men and women were trained in various aspects of food and beverage, housekeeping and food production.

Within the hospitality trade, there is reasonably high demand for skilled women employees. “Both girls and boys need a lot of training in the softer areas, but girls tend to be better,” said Anita Rajan, chief operating officer, Tata Strive, the Tata’s CSR arm that focuses on skilling India’s youth. “But with the girls you have to involve their parents. It’s the parents who have a lot of problems, especially if the place of work is far away.”

When they do travel out of the village, the girls tend to travel in groups. Usha Shihare, 19, the daughter of a farm labourer, left her village in the north-eastern Maharashtra district of Gondia, 650 km away, with seven other girls to work in an Aurangabad hotel. To go back home, she must take travel by bus to the district headquarters, 14 hours and then hop on to a connecting transport to her village. “When my grandmother passed away a year ago, I could not make it back in time for her cremation,” she said. “It’s not worth it to work for such a low salary so far from home. I wish I could get a job near my village, but there are no hotels there.”

Part of the problem in recruiting women is a ‘mindset’ problem. “There are a lot of openings at the entry level but huge barriers to entry. There’s the issue of mobility – if the job is not near her home, then where will she live? If hotels don’t provide hostel accommodation, getting one on rent is tough. Landlords don’t want to keep single women because of the perceived burden of ensuring ‘safety’ for them,” said Medha Uniyal, programme director, Pratham Institute.

Many of the girls who join, like Anita who signed up while her father was out of town on work, brave parental opposition. “Aspiration is very high,” said Rajesh Thokale, Pratham Institute’s programme director. “But the challenges they face in coming out of the villages are enormous.”

It took a village to decide to send its girls to learn skills that would enable them to get jobs.

At Sulibanjan village (population 3,000), a stone’s throw away from Khultabad, the final resting place of Aurangzeb, once emperor of India, the woman sarpanch, Mehrunissa Syed Ashraf Ali, explained: “The parents were worried; their daughters had never left home. So we held meetings with the people from the institute and they explained to us why it was important to teach our daughters a skill.”

Earlier, the girls would study till grade seven and then be married off. Now they have a choice. “We have seen that the institute has a very good atmosphere and it is safe to send our girls there,” said Ali.

The single largest drop from jobs, about 53%, has occurred in the 15-24-year-old age group, the World Bank report found.

If you were to look for a silver lining, it is here. India’s girls have finally caught up with the educational achievement of boys particularly at the secondary and high school levels. Sustained efforts by governments and NGOs have bridged the education gap and if fewer young girls are working, it is quite simply because they are studying. 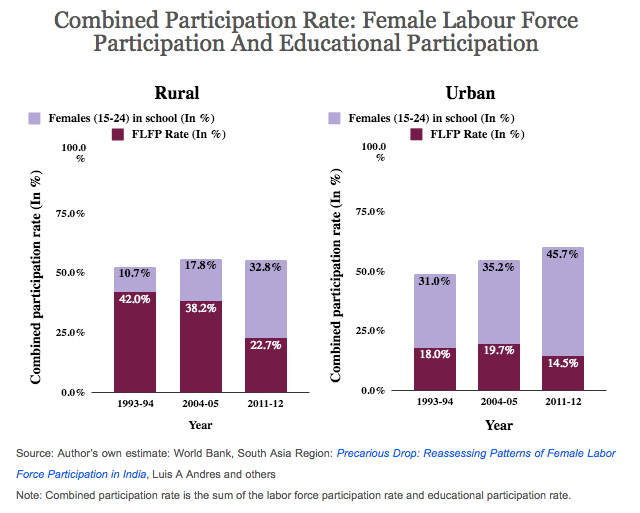 About 95% of women trained receive job offers, not everyone accepts

The Pace Hospitality Training Centre at Nandrabad village, 23 km north-west  of Aurangabad and on the route to the famous Ellora caves, recruited 960 young men and women from nearby districts, including Ahmednagar, Yavatmal, Nashik, Dhule and Beed last year. Almost all came from disadvantaged backgrounds.

Sarika and Sunil Vithal came here after their parents were killed in a road accident while on their way to a wedding. While Sunil had been working at a local dhaba, Sarika found work as a daily wage labourer in the fields owned by other people. Both are now enrolled at Pace, learning the ropes of housekeeping.

Nearly 30% of students at Pace are women, and unlike the men who pay Rs 16,000, they pay a subsidised fee of Rs 2,000 including boarding and lodging, uniforms and training material. If the men can’t afford to pay Rs 16,000 upfront, they can apply to pay in installments. The Vithal siblings’ fee has been waived.

Aurangabad is a bustling town made famous for once ordering 150 Mercedes Benz in a single transaction. No Mercedes are in evidence on the streets; instead women whizz by a replica Statue of Liberty on their two-wheelers, arms and face carefully covered to avoid getting tanned under an unrelenting sun. Tuition centres like Bansod’s classes, ‘the synonym of success’, and hotels jostle for space with hardware and paint shops.

Not everyone accepted. “Sometimes the job is in a big city and parents are reluctant to send their daughters so far away,” said Saurabh Deshpande, Pratham Institute’s academic head for hospitality training. “More than the girls, you often have to convince their parents.” 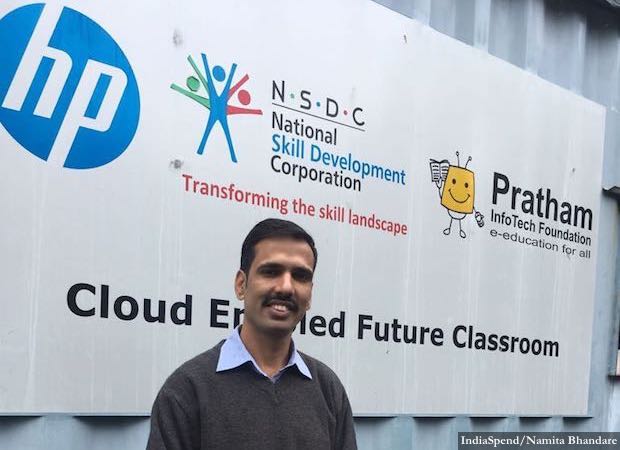 “Sometimes the job is in a big city and parents are reluctant to send their daughters so far away,” said Saurabh Deshpande, Pratham Institute’s academic head–hospitality training. “More than the girls, you often have to convince their parents.” Credit: indiaSpend/Namita Bhandare

Chef Swati Shinde, an assistant food-production trainer, had no such problems. As a single mother to a five-year-old son, she knew she had to get a job to survive – just as her mother had worked after her father’s death. Yet, her choice to train as a chef is unusual for most women tend to opt for housekeeping or food and beverage.

“Being a chef is hard physical labour and not all women can do it,” said Swati, who after a seven month job at Cream ‘n Crunch café now works at Pace, teaching other men and women to be a chef. It’s a job that gives her a place to stay while her mother, Ashabai Shinde, takes care of her son who studies in grade one at Sant Gyaneshwar School in Ranjangaon, a district of Aurangabad.

“When you have to work, you do everything,” said Ashabai. “I had to do it all, construction sites, washing utensils and clothes, whatever it took to bring up my daughters after their father died.”

Swati was married soon after she completed grade eight in school. Her husband, though wealthy, was a drunkard who beat Swati “like a mad man,” said Ashabai.

In no time, Swati was back home with a newborn son and hasn’t looked back. She managed to complete her schooling “cutting vegetables and peeling garlic for madams who worked and had no time to cut them”. Then last year she heard about the hospitality training course and thought, why ever not?

Today, Swati said, she earns enough for her mother to lead a retired life – she owns her own place and rents out a part that gives her an income to take care of her personal expenses.

Meanwhile, Swati has started a BA programme. “One should be educated,” she said. But she’s clear that she wants to continue as chef. “I am learning a lot. Facing a class has given me a lot of confidence,” she said. Ever since she joined in June this year, she has not had a single girl student. But the boys have no problems taking instructions from her, she said. “Everybody respects me.”

Growing up, Swati dreamed of becoming a doctor. “But this line has given me a skill that nobody can take away, even if I lose this job,” she said.

She’s still dreaming. One day she will have her own café in which she will serve her favourite thing to make, pizza. “In my village nobody likes it. But I think it will be popular in Aurangabad.”