Germany Rape Laws Put Into Question by a Controversial Case

After the events in Cologne, German lawmakers had been forced to act against issues of sexual assault. 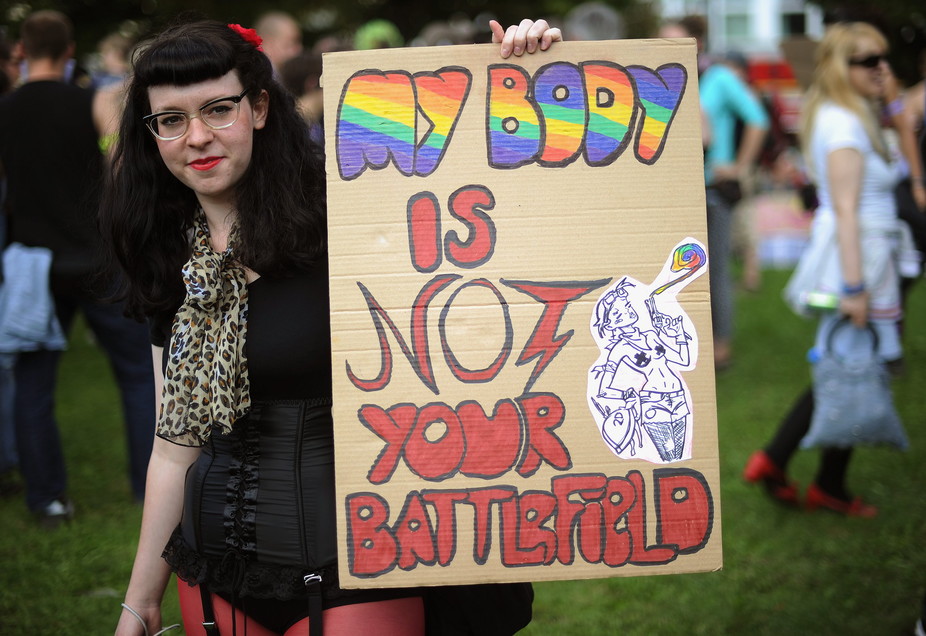 Germans have been protesting against rape laws for years. Credit: EPA/Hannibal Hanschke/Files

Gina-Lisa Lohfink, a well-known German actress and model, is on trial for falsely accusing two men of raping her. If found guilty, she will face a fine of around £19,000. One of the two men she accused was previously convicted for illegally sharing a so-called “sex video” online in which Lohfink appears naked, at times apparently semi-conscious or unconscious, while he and another man perform sex acts on her. She clearly shouts “no” and “stop” several times.

After the video was released, she accused the men of raping her – but her accusation immediately hit a snag, German criminal law has never recognised rape unless the victim physically resists the attack. Saying “no” or “stop” is not considered an indication that the woman refuses “sex”. (There are some exceptions to this law, such as when the victim cannot fight back because of disability.)

And so Lohfink is now in court as the accused. On the first day of trial, she broke down in the courtroom after three men called her “whore” with impunity.

In her original allegation, Lohfink said she had met and slept with one of the men two nights before the events captured in the video. On the night in question, says she she met up again with him and a friend of his at a Berlin Club. The following afternoon, she said, she woke up in a flat with no idea where she was.

She testified that at first, the two men refused to let her go, and that when she was finally allowed to leave the apartment, she had no idea what had happened, just a feeling that something was wrong. She said she recognised the effects of a date-rape drug that she had experienced twice before in her life.

Meanwhile, the two men contacted multiple media outlets trying to sell the video they had shot. The outlets in question refused and informed Lohfink’s manager, who hired a lawyer to report the men for violating her client’s privacy. When the men couldn’t find any buyers for their footage, they shared the clip online; it went viral.

It was only after watching the video, Lohfink said, that she realised she had been raped.

Lohfink is a well-known actress and model. She found fame through Germany’s Next Top Model followed by a series of reality TV shows and has since performed in a pornographic film. Even some of the more sympathetic reports on the case commented on her large and apparently surgically modified breasts and lips, and her peroxide bleached hair. Berlin’s largest daily newspaper described her as “a double-D star”. And despite her allegations, they all describe the footage released as a “sex video”.

The prosecutor’s office dropped the case against the two men after an expert had watched the video and assessed that there was no evidence that Lohfink had been drugged. The prosecutor then decided that Lohfink had lied and handed her what legal experts deemed an unusually high fine. Lohfink appealed the decision, and has been standing trial since June 1.

So, four years on from the furore over the video, Lohfink is once again in court over the events of that night. But this time, she is the accused. And in Germany, this is far from unusual: German criminal law has a long history of legally protecting rapists.

It was not until 1997 that rape in marriage was recognised. During the heated parliamentary debates leading up to the historic vote that passed that law, prominent German MPs emphasised “Beischlafpflicht” – the duty of the wife to submit to sexual intercourse.

This callous disregard for women and girls’ sexual self-determination is deeply ingrained. In a widely cited 2006 decision, the Federal Court of Justice of Germany overturned a rape conviction of a lower court, arguing that while “the accused ripped off the clothes from the body of the co-plaintiff and had sexual intercourse with her against her explicitly expressed will”, there was no evidence that he “forced the victim with violence”.

Six months ago, German lawmakers were suddenly quick to act on sexual assault. After the events of New Year’s Eve in Cologne, they authorised deporting refugee men accused of sexual violence in contravention of international law – even as reports of security guards raping and sexually exploiting refugee women in shelters went under the radar.

In a widely discussed op-ed, a prominent German journalist lamented that German society only cares about sexual violence when perpetrated by foreigners or Germans of colour. “We prefer to abuse “our” women ourselves,” he quipped.

In recent weeks, as growing pressure on social media (#TeamGinaLisa) reached the opinion pages of some of the major daily newspapers, the German minister of justice announced that he was open towards making further changes to a draft bill he had been working on for a few months, which was supposed to add more exceptions to the existing requirement for the victim to physically resist – but which would still allow “no” to mean “yes” in most situations.

As pressure continued to build, the German government finally announced that it will at last change the law to state that “no means no”, whether articulated verbally or non-verbally. But if the debates of the last six months are any indication, it is shockingly naïve to think that this will change the uneven way the law is actually enacted – or, for that matter, the tone of public opinion.