Lacking piped water supply, young girls and women in rural areas of Jammu and Kashmir spend hours walking long distances to get water far from their homes and waiting for their turn at the source. 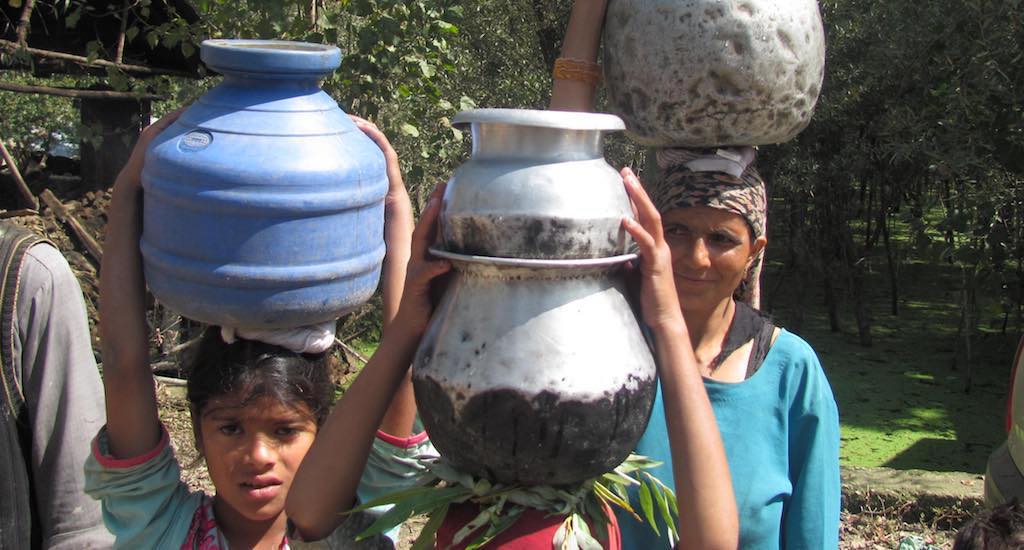 Lacking piped water supply, young girls and women in rural areas of Jammu & Kashmir spend hours walking long distances to get water far from their homes and waiting for their turn at the source. Credit: Athar Parvaiz

“Safe water, sanitation and hygiene at home should not be a privilege of only those who are rich or live in urban centers,” Tedros Adhanom Ghebreyesus, the director general of WHO, said in a news release in July this year.

Villagers in many parts of Jammu and Kashmir feel exactly the same way. Residents of several villages across the state have to bear physical, economic and psychological hardship for getting access to water needed for their survival.

For a pot of water

Naseema Akhtar, a 40-year-old woman of Bonipora village in the northern Kupwara district, has to make several treks for collecting water from a small spring in the nearby hills. Akhtar and her neighbours collect water from the hillside because they find only that water fit for drinking. They don’t have any piped water supply in their village.

“It does take us a lot of effort to fetch water from a spring situated way up, but we don’t mind the trouble because we use this water without worrying about the consequences, given its purity,” Akhtar told VillageSquare.in. 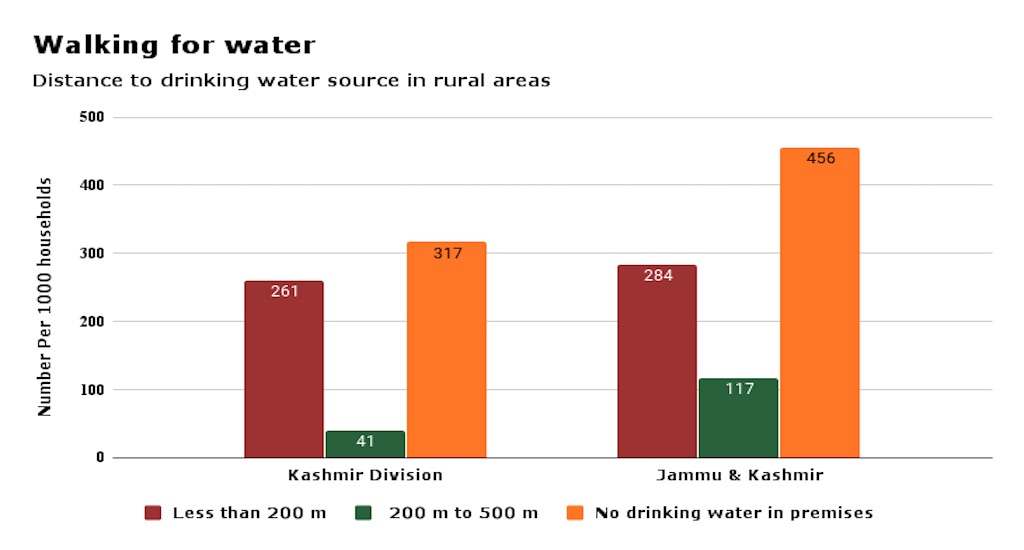 According to a study by Water.org, disadvantaged women and children across the globe spend 200 million hours a day just to collect water, enough working time that could build nearly 30 Empire State Buildings.

Another study by University of Illinois says that the amount of time that women and children spend traveling to fetch water prohibits them from living out their full potential. Young girls often times have to miss school because they are traveling to provide water for their families, says the study.

Mubeena, a teenage girl in Kanihama village of Budgam district in central Kashmir, has appeared twice for her tenth standard exams, but was unsuccessful on both the occasions. The reason for her poor performance in studies is largely because she has spent most of her time in doing household chores including fetching water for the family, rather than attending school. “I don’t want to write the exam again. I don’t think I can do any better this time around,” she told VillageSquare.in.

In Harichander village of northern Bandipora district, young girls and women said that they consider themselves lucky when the water tanker comes to their village to supply drinking water. “The tanker supply is not reliable. Sometimes we get it, sometimes we don’t. When we don’t get, we have to go and collect water from adjacent villages,” Fatima told VillageSquare.in.

Paying and protesting for water

While some villages have access to piped water in the state of Jammu and Kashmir, there are still scores of villages that have to either make their own arrangements for getting potable water or have to be content with polluted water unsafe for drinking.

Abdul Gani Bhat of Bedibera village in Kupwara pays Rs 400 to a local tanker owner to fill the water tank in his house every week. The village, with over 500 households, experiences acute water shortage every summer. “This is an unnecessary expenditure. If we had proper water supply, there would be no need for me to spend on buying water,” Bhat told VillageSquare.in.

People of different villages across Jammu and Kashmir stage protests almost on a daily basis in summers for lack of drinking water and blame the authorities for not taking proper measures to address their grievances.

In late July this year, residents of Hompora village in Handwara area of north Kashmir staged protests for days, demanding piped water supply and tanker service for their village. 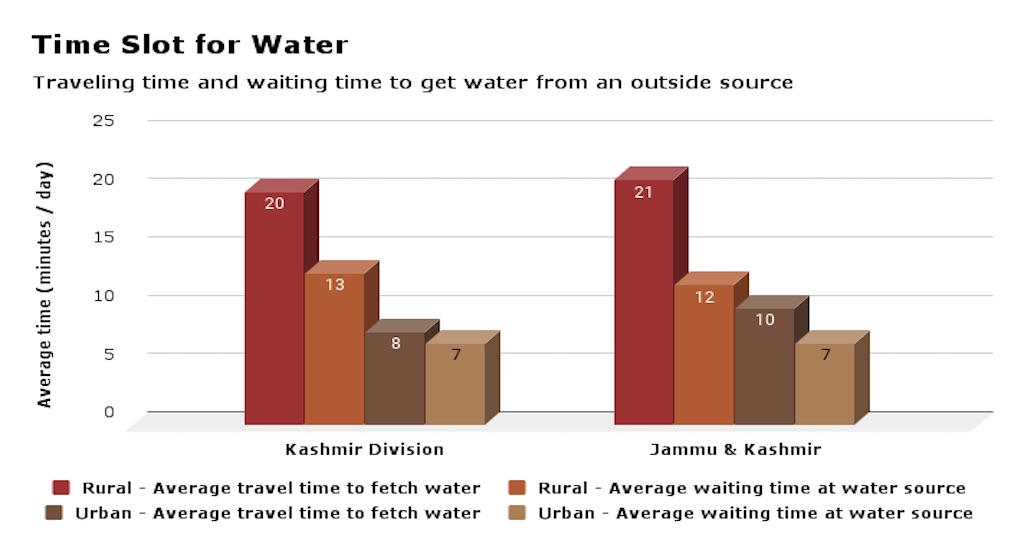 According to a July 2017 UN report, of the 2.1 billion people in the world who do not have safely managed water, 844 million do not have access to basic drinking water. This includes 263 million people who have to spend over 30 minutes per trip collecting water from sources outside the house and 159 million who still drink untreated water from surface water sources, such as streams and lakes, says the report.

Traveling and waiting for water

However, in urban areas of Jammu and Kashmir, a person spends 10 minutes to fetch drinking water, in addition to a waiting time of seven minutes. The figures show the disparity in availability of water between urban and rural localities.

The district level results of the survey reveal that rural areas of Reasi district in Jammu Division fares the poorest. A household member spends an average traveling time of 34 minutes and a waiting time of 17 minutes. Reasi is followed by Rajouri district where a person spends 30 minutes of travel time, with 16 minutes of waiting time. Akhtar and her neighbours of Bonipora in Kupwara district spend at least two hours every day for fetching water. 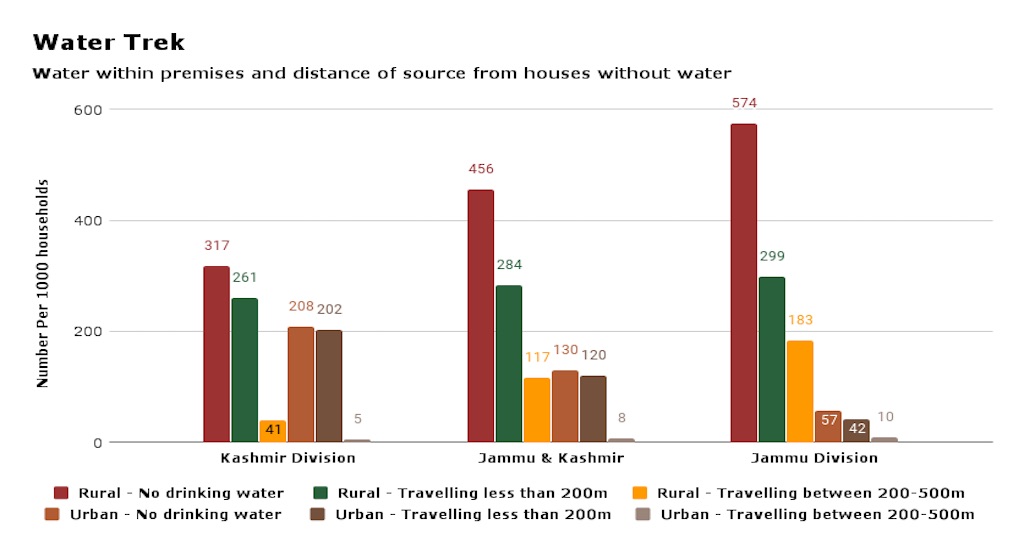 As for the districts of Kashmir Division, a villager of Anantnag district spends 33 minutes of travel time and 30 minutes of waiting time. In Pulwama district a person spends travelling time and waiting time of 29 minutes and 23 minutes respectively.

“We have to walk more than 1 km to collect water for our daily use. This is total injustice,” Abdul Subhan, a resident of Hompora village, told VillageSquare.in. “We have raised this issue several times, but it is yet to be fulfilled.”

The original article was published on Village Square. Read the original here.