How Feminists Have Catapulted Women to National Leadership Roles

Many women who climbed to power in male-dominated political systems benefited from feminist movements that urged more women be in leadership positions. 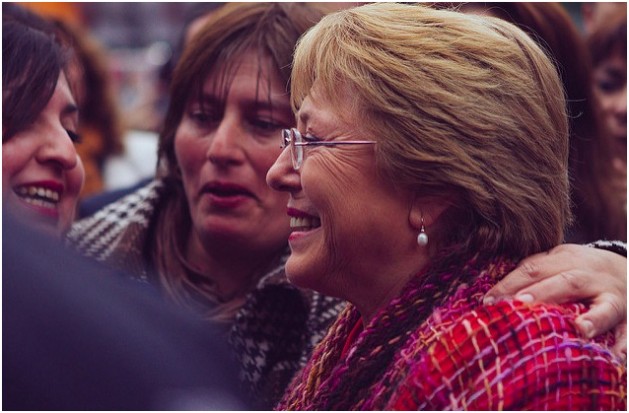 Michelle Bachelet, president of Chile, campaigning in Valparaíso, June 2013. The author writes that Bachelet has promoted “women-friendly” policies, but not all female leaders do so. Courtesy: IPS

New York: Hillary Clinton did not make it to the top, but Theresa May, the British prime minister, and Angela Merkel, chancellor of Germany, did. Since Sirimavo Bandaranaike became the world’s first female prime minister, in Sri Lanka in 1960, one-hundred women have been heads of state or government around the world.

How did they get to power and did they make a difference? And how much did feminist activists influence the promotion of female leaders? Plenty and decisively.

The nations of the world reaffirmed faith in the equal rights of women and men when the United Nations was created in 1945, though all the existing states were male dominated and 97% of the representatives at the San Francisco conference were men.

My analysis of the conference shows that women from Latin America, headed by Bertha Lutz from Brazil, lobbied successfully for women’s rights, despite opposition from, among others, the sole US female representative, Virginia Gildersleeve, the dean of Barnard College.

Since then, the UN and member states have repeatedly demanded women’s equal participation in power structures, but progress has been slow. When it comes to everyday realities, men in power often seek to maintain their prerogatives, and the higher the position they hold, the greater the resistance to including women. Torild Skard, the author of Women in Politics.

In 2017, only 23% of members of parliament are women; 18% of government ministers are women; and 5% of national leaders are women, according to the Inter-Parliamentary Union.

When I studied the life course of 73 female presidents and prime ministers in 53 countries from 1960 to 2010, in my book, Women of Politics, it was evident that national leadership for women was no simple matter.

In all regions, except North Africa and the Middle East, women rose to power but not often, and it happened in about twice as many industrialised nations as in developing countries. To succeed, most of the female top leaders had extraordinary qualifications, including extensive education and professional careers.

In addition, the political systems provided opportunities. The great majority of women rose to power in established or emerging democracies. But if a certain democracy was necessary for women’s political participation, that was not enough.

Worldwide, political institutions were male dominated and women were neither mobilised nor welcomed if there was no pressure from feminist movements to do so. Many women who climbed to power benefited from activists requiring more women in leading positions.

In practice, women used three paths to become national leaders. Sirimavo Bandaranaike of Sri Lanka, Indira Gandhi of India, Isabel Perón of Argentina and others in Asia and Latin America took over the political position of a deceased father or husband.

A few, such as Vigdis Finnbogadottir of Iceland and Ertha Pascal-Trouillot of Haiti, came in as outsiders relative to their personal background. But most of the women rose in the ranks of the political parties, gaining a degree of conditional support from male colleagues.

The political parties are crucial actors in democratic systems, representing a link between people and power. But often they represent an obstacle and do not provide support for women. Studies of parties are, unfortunately, rare. It is notable that globally, women hold only 10% of leadership positions in political parties.

I studied to what extent female leaders followed up the UN Convention on the Elimination of All Forms of Discrimination Against Women (Cedaw), which has 189 states parties, of which the United States is a signatory but has not ratified it. Here is what I learned:

• Some women, albeit a few, conformed to male-dominated politics and neglected or weakened women’s positions. Such examples were Tansu Ciller of Turkey, Golda Meir of Israel and Margaret Thatcher of Britain.
• About half of the women played a compromising role, trying to look after the interests of both men and women. These included, among others, Corazon Aquino of the Philippines, Eugenia Charles of Dominica, Cristina Fernández Kirchner of Argentina, Mary McAleese of Ireland and Merkel and Gandhi.
• Finally, about a third of the women openly opposed male policies and promoted women-friendly measures, such as recruiting women to high positions, ensuring their reproductive rights and establishing special institutions for women. These include Michelle Bachelet of Chile, Benazir Bhutto of Pakistan, Helen Clark of New Zealand, Ruth Dreifuss of Switzerland, Tarja Halonen of Finland, Ellen Johnson Sirleaf of Liberia and Lidia Gueiler Tejada of Bolivia.

Although most female heads of state and government did not call themselves a “feminist,” they all contributed to strengthening women as political actors by accepting a top position. Thereby, they broke prevailing patterns and, in most cases, showed that women could handle the tasks. In addition, the great majority — some more and some less — made efforts to support women in particular. So, it usually made a difference with a woman at the top instead of a man.

The approaches of top female leaders to winning gains for women was important, but to carry out substantial women-friendly policies they needed support. An active feminist movement pressuring the relevant levers was essential. And the political system had to work democratically, so feminist voters could have an impact on who was elected to political office and which policies were pursued to promote gender equality.