Building a New Place for Women in Construction 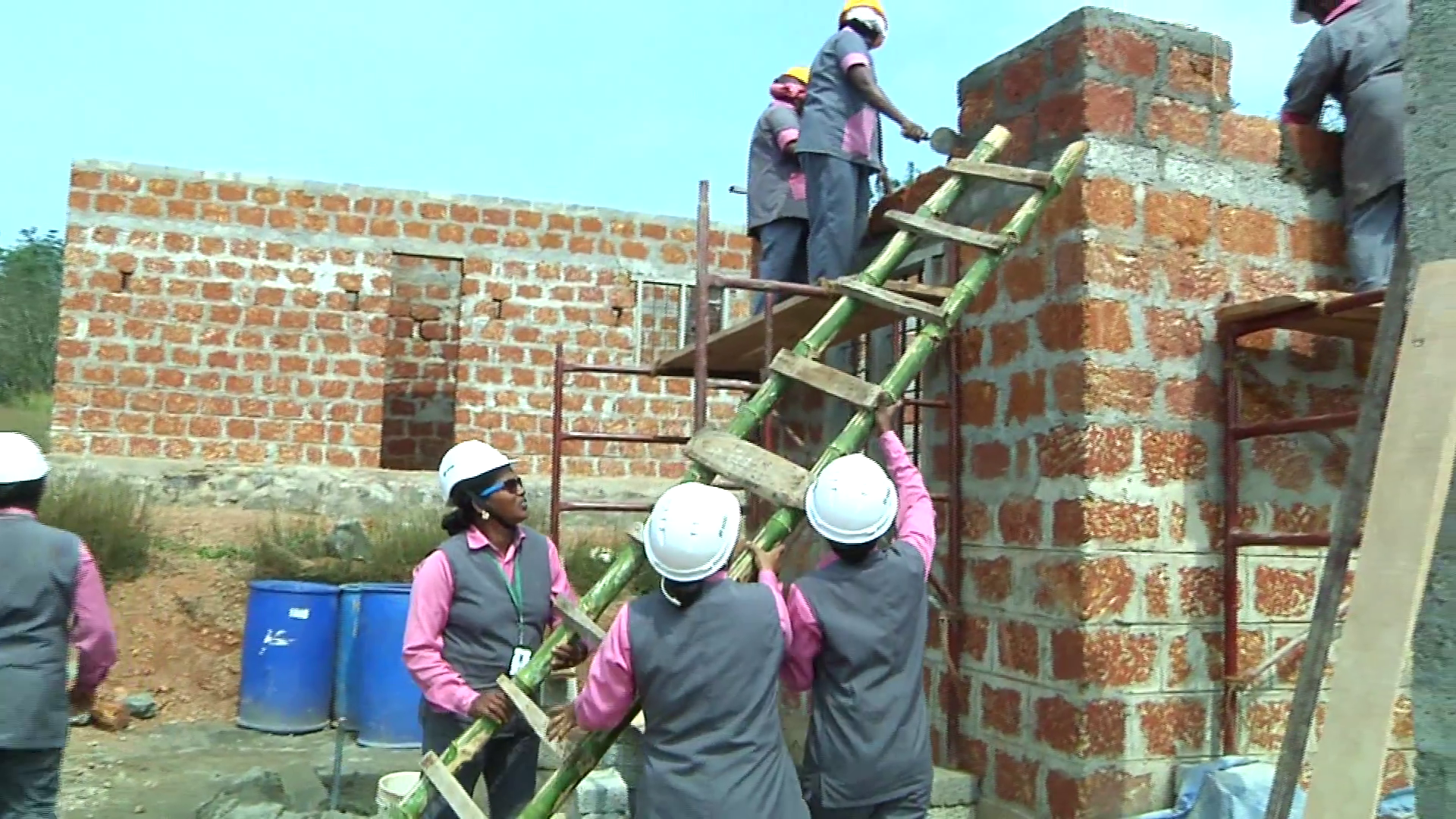 Kochi: The tribespeople gathered at the District Collector’s office in Ernakulam were in no mood to wait. Their patience has waned after eight years of waiting for houses they had been promised by the Kerala government. The district administration, however, was helpless, as one contractor after the other withdrew from the project saying the allocated funds were too low to allow a profit.

This time, however, the officials had an unusual plan. A group of women had joined the meeting of the bureaucrats and the agitated tribesmen. “We will build your houses,” one of them said.

The Ulladan tribals were puzzled, but the officials pinned their hopes on the confident team.

Two years later, Beena Paul has kept her word. On a hillock in Edakkattuvayal panchayat, 30 kilometers from Kochi, her all-woman team has built nine houses at a cost of less than Rs.3 lakh each, when Paul says no established builder would settle for any budget less than Rs.4 lakh.

The distant morning in December 2013 marked a milestone in the journey of Kudumbashree, the Kerala government’s poverty eradication mission that facilitates microcredit and promotes entrepreneurship through women’s self-help groups. Women find a livelihood through a variety of tasks, from vegetable farming to municipal waste-disposal through 2.58 lakh neighbourhood groups spread across Kerala.

Kudumbashree Constructions is one initiative aimed at training women to perform skilled tasks in construction. Although about half of India’s construction labourers are women, their participation is limited to the lowest-paid roles of porters and helpers. In Kerala, skilled labourers like masons are paid anywhere between Rs 850-1000 a day, or twice the wage of unskilled workers, even though the state is considered a mecca for its high wages and attracts labour from across the country.

When Beena Paul, who had a diploma in civil engineering, heard that Kudumbashree was starting a construction unit to liberate women from the exploitation and discrimination in the industry, she jumped at the opportunity.

Kudumbashree partnered with HUDCO and KITCO to train 130 women in Ernakulam district in masonry and other fields of construction. More than half of them were civil engineering graduates or diploma holders from industrial training institutes. An all-woman construction team was stitched together, comprising engineers, supervisors and other skilled workers with competency in activities including drafting plans and estimating costs.

The days after the training were challenging for the team: instilling confidence in clients wasn’t easy. “Hardly anyone, including the state officials, believed we could do the job,” says Paul. “Will you also cheat us?” an elderly tribesman had asked Paul at the collector’s office. His plaintive question was a kind of leading light for the team. “His words motivated us to proceed with the difficult task of constructing houses in a hostile terrain with utmost sincerity, forgetting profit margins,” Paul says, amid attending phone calls and signing cheques for material suppliers.

She thinks their first project was in the spirit of Kudumbashree’s socially committed outlook. The Kudumbashree team redrew the original plan to widen roads and add more amenities to the tribal housing project. Scepticism of the villagers turned to awe as the work progressed.

The first phase of the project has been completed. The women have built nine houses with their own hands except for roofing and electrical works. Each house with a built-up area of 325 square feet comprises a hall, a bedroom, kitchen, work area and a toilet. The State Scheduled Tribes Development Department has allotted Rs 2.50 lakh for each house. Additional expenses were borne by Kudumbashree.

“The profit margin is very low yet we have no complaints as this has become a good training ground for our women. They can undertake more projects in private and public sector in future,” says Paul who remains the pillar of the unit.

Women find it hard to learn the craft in a regular construction sites as men refuse to share their expertise with women, Paul says. “It is all about giving them an opportunity,” she adds.

To strengthen the team, a group of women in the district is undergoing training in electric work and plumbing. Kudumbashree is also setting up a brick construction unit to cut costs and make the women self-reliant in the projects they undertake. The group has already received the contract for a housing project in Mookkannoor panchayat in Ernakulam district as part of a state government project to build houses for the destitute.

“Women construct these houses as if they are their own,” says Tani Thomas, district coordinator of the Kudumbashree Mission. She says the initiative has a potential to be replicated across the state.

Thomas says the initiative has the double advantage of empowering women economically while saving public money in construction projects, in which contractors often siphon off public money. “We are trying to get accreditation from the Kerala Local Self-Help Department so that more of public works such as road construction can be handed over to the women.” In addition the Kudumbashree team is thinking of pitching in a demand for a 25% reservation for women in government construction works, which are usually lobbied by the influential contractors.

P.R. Sreekumar, Director of Kudumbashree State Mission, admits he was sceptical of the team’s success in its early days. “They amazed all of us,” he said. “These are women who made willpower their weapon.” Nourishing and expanding the construction unit is now Kudumbashree’s priority. “This is just a small beginning.”

Meanwhile, Babu, one of the beneficiaries of the tribal housing project, is a happy man.

“Four months ago, I was pessimistic about the potential of these women. They worked with sincerity to give us a home,” he says, with his hand resting on the new wall. ‘I can’t wait to get the keys.’

Shawn Sebastian is a freelance journalist and documentary film maker.