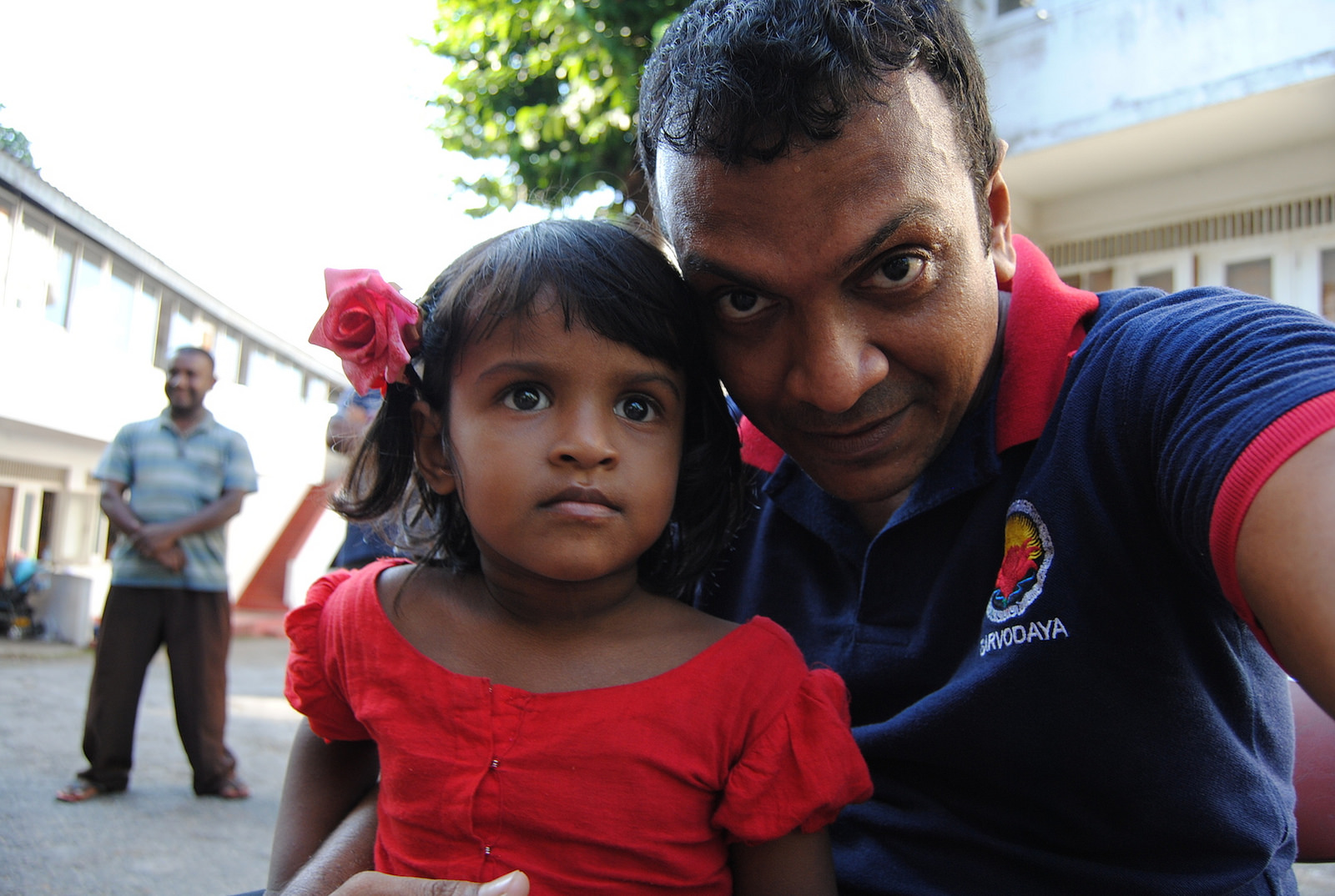 Much has already been written and said about the torrent of abusive tweets by Modi devotees, aimed at women who criticized the Indian Prime Minister’s advocacy of the ‘Selfie With Daughter’ campaign. What interests me more than the outright abusive and violent tweets/comments, are the ones that are less obviously offensive, but more revealing of a misogynistic and paternalistic framework that underpins the Selfie With Daughter campaign, as well as related campaigns like Beti Bachao and Raksha Bandhan.

For instance, the actor Alok Nath deleted his tweet that had said ‘Jail the bitch,’ clearly because he himself found it to be indefensible. But it is interesting to examine another tweet that he chose to endorse with a retweet.

The Selfie With Daughter campaign, let us recall, has the self-proclaimed aim of resisting sex-selective abortion, by encouraging fathers to celebrate and display pride in having a daughter. The campaign was initiated by the Sarpanch of the Bibipur panchayat in Haryana, and the Prime Minister endorsed and expanded the campaign during his ‘Mann ki Baat’ (Straight from the Heart) speech on radio, hitching it to his Government’s campaign of ‘Beti Bachao Beti Padhao’ (Save and Educate Your Daughter).

Alok Nath chose to RT a tweet that derided me by suggesting that “When people see a retard like her they start killing her girl child even before she is born out of fear (sic).” What does this tweet reveal about the nature of the Beti Bachao, Selfie With Daughter and Raksha Bandhan campaigns that the Prime Minister has claimed will counter sex-selective abortion and boost respect for women?

It says that a daughter is worth ‘saving’ only so long as she is not a ‘retard’. It says that an outspoken or irreverent daughter does not deserve to be born, and if she exists, she must be derided as ‘retarded’. Of course, the sentiment not only reveals deep-seated misogyny, but also contempt for the differently-abled.

But the tweet is above all, symptomatic of the paternalism inherent in the Beti Bachao and Selfie With Daughter campaigns. It is paternalism because it does not question the idea that parents have a right to decide, based on their assessment of a daughter’s moral worth, whether or not she has a right to exist. The paternalism can be benevolent, in which fathers/parents aver their pride in having a daughter. But the very same paternalism can also decree that disobedient daughters ought not to be born – and by implication can even be killed if she turns disobedient or otherwise disappointing.

Haryana, where the ‘Selfie With Daughter’ campaign was first born, is a state where ‘honour killings’ are rampant. These are family-custodial killings of daughters who have disobeyed caste or clan norms to love and marry someone of their choice; very often the partner is also killed.

Nakul Sawhney’s film Izzatnagari ki Asabhya Betiyan (Immoral Daughters in the Land of Honour) documents how the leaders of the dominant Jat khaps (clan councils) assert that “some daughters who are immoral/uncivilized, like animals, try to corrupt the rest by demanding that they should be allowed to live their life without restrictions,” whereas these clan leaders decree that marriages be fixed taking care to maintain and reproduce social hierarchies (watch an excerpt here).

If a campaign cannot ask parents and brothers and Indian citizens to take pride in and seek to safeguard the autonomy and assertion of women – including the right of the said women to disagree with them, disobey them and live life on their own terms – how can such a campaign ever counter sex-selective abortion, rape, ‘honour’ killings or any other forms of gender violence?

This point is illuminated by a closer look at the reports from Bibipur village in Haryana, the birthplace of the Selfie With Daughter campaign. This detailed report reveals some significant aspects of the campaign. It is clear from the report that in Bibipur, the question of sex-selection and skewed sex ratio is approached, not from the point of view of women’s deprivation of their rights, autonomy and lives, but from the perspective of men’s deprivation of their entitlement to wives.

The moving impulse behind the campaign is the Avivahit Purush Sanghthan (the Unmarried Men’s Organisation) that, prior to the Parliamentary Elections of 2014, challenged political parties with the slogan ‘bahu lao, vote pao’ (‘Get us brides, we’ll get you votes’). Parties were asked to commit to fixing the sex ratio and end to ensure that unmarried men got brides. As an innovative way to counter sex-selective abortion, the Sarpanch Sunil Jaglan initiated a competition for the best selfie of fathers with their daughters.

In contrast with such feminist impulses, a campaign against sex selective abortion that is linked with making sure that men get brides (‘Beti Bachao’ so that men can have ‘Bahus’) has a fairly obvious catch in it. What if the said betis choose not to be bahus; choose to break the marriage norms of their community?

A ‘beti’ (daughter) who has been ‘saved’ from sex-selective abortion, and educated to boot, may well decide not to get married to men of her clan or caste or community, or at an age considered appropriate by her community or family. But the ‘Unmarried Men’ who want women to be born so that these women can keep up the supply flow to meet men’s demand for brides, are likely to be offended at the idea that the women might choose not to be brides to men in their own community.

Such a campaign by Unmarried Men is fundamentally contradictory to women’s rights to decide whether, when, and who they will love or marry. In fact, in the report cited above, the Sarpanch Sunil Jaglan defends the GGG principle that prohibits marriages in the same “gaon, gotra, guhaand (village, clan, cluster of villages)” as an essential ingredient of “Haryana culture.” Can we forget that the khap panchayats of Haryana kill couples who fall in love and marry in violation of this rigid GGG principle?

For instance, the phenomenon of buying brides (from other states) to supply wives for Haryana men shows how women are seen as chattel, as property. In this patriarchal scheme of things, men need wives to perform sexual and reproductive duties and household labour; if wives are in short supply in Haryana, they must be sourced and bought from other states. This is the perspective that dominates in Haryana – leading to BJP leader OP Dhankar assuring a Kisan Mahasammelan (farmers’ conference) in Jind (the district to which Bibipur village belongs) that the BJP would ensure good brides from Bihar for Haryana’s unmarried men: “Making the BJP strong means that those youths in many villages who are roaming without brides will get one” because “Sushil Modi (senior BJP leader in Bihar) is a good friend of mine. We will ensure a good match….”

The manner in which the Bibipur panchayat seeks to prevent sex selective abortions is perhaps not very effective, according to a survey by the Kurukshetra University geography department. Prof. Mahabir Jaglan, a senior professor at the department who supervised the survey, quotes the findings: “The overall gender ratio in the (Bibipur) village is 866, which is lower than the Haryana average. The worst part is that the gender ratio among infants (0 to 1 year age group) was only 510…The low infant gender ratio shows that the practice of female foeticide and systematic discrimination against the girl child was prevalent on a large scale in Bibipur…”.

Feminism asserts the inalienable rights of women to equality, autonomy and freedom from discrimination. It calls on women to challenge and break patriarchal restrictions. Paternalism, on the other hand, may benevolently loosen or ‘reset’ restrictions – while continuing to retain the right to decide how and how much to restrict women’s freedom. Take the decision by the Satrol khap of Hisar district to “allow” inter-caste marriages.

While this decision was lauded as “historic” by media as well as by the Bibipur Sarpanch Sunil Jaglan, who is also a representative of the Naugaon khap of Jind district, it is notable that the Satrol khap “continued to ban inter-caste marriages in the same and bordering villages and same-gotra marriages.”) The Special Marriage Act in India already guarantees the Constitutional right of adults in India to marry irrespective of caste or gotra. How, then, can a khap “allow” or “disallow” such marriages?

There is, no doubt, a tension between rigid and more liberal impulses amongst the representatives of caste-patriarchy. But even the more benevolent elements do not question the right of community custodians (male or female) to impose decisions and restrictions on women.

Other models of paternalistic protectionism include the dress codes imposed by caste or political outfits on women, supposedly to safeguard them from rape. The Chief Minister of Haryana, Manohar Lal Khattar of the BJP, supported this victim-blaming view when he declared “Freedom must have limits too, girls should dress decently to not lure boys” and even supported the khaps’ ban on same gotra marriages, saying “”Khaps maintain the tradition of a girl and boy being brother and sister. They are just making sure that a girl and boy do not see each other in the wrong way. These rulings help prevent rapes too.”

Coming back to the revealing comments on social media, I was intrigued by a series of tweets directed at me, that suggested that women like Shruti Seth or I are like Soorpanakha rather than Sita, and therefore deserving of violence and disrespect.

Soorpanakha as imagined by Valmiki and other dominant renditions of the Ramayana, is dark with sharp nails. She roams as a single woman, who propositions Rama and Laxmana, and her sexuality is seen as dangerous and deserving of humiliating punishment. The mutilation of her nose and ears is a transparent euphemism for mutilation of sexual organs.

Paternalism demands subservience as the wages of tolerance and suspension of violence. This applies not only to women but to oppressed castes and minorities too. Paternalism always blames violence on ‘provocation’ by the group (women, Dalits, minorities) that refuse to remain subservient and accept the hierarchical order of things. The paternalism with its implicit threat of violence under a veneer of benevolence, is what underpins the Beti Bachao, Selfie With Daughter, and Raksha Bandhan campaigns. The violent, abusive and misogynist social media cohort of the Prime Minister have only exposed this reality.