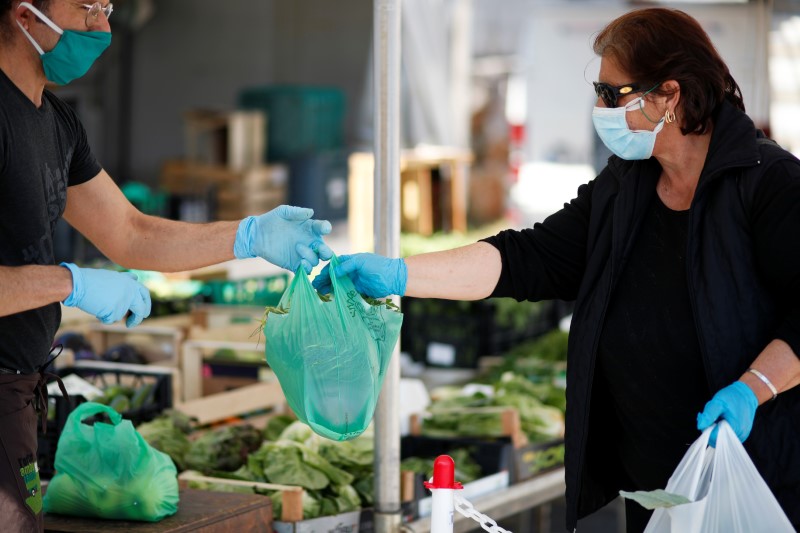 A vendor wearing a protective face mask delivers a plastic bag to a customer at an open-air food market that has been reopened, during the coronavirus disease (COVID-19) outbreak in Cisternino, Italy, April 27, 2020. Photo: Reuters/Alessandro Garofalo/File photo

New Delhi: The United Nations (UN) on Tuesday warned that the world stands at the cusp of a food crisis not seen in at least 50 years and urged governments to act swiftly to avert the crisis.

“Unless immediate action is taken, it is increasingly clear that there is an impending global food emergency that could have long term impacts on hundreds of millions of children and adults,” said UN secretary general António Guterres in a video message.

The UN said that 820 million people in the world, or more than 10% of the world’s population, were already ‘chronically food insecure’ prior to the onset of the COVID-19 pandemic. These numbers are expected to now rise due to the repercussions of the pandemic.

This, Guterres said, is not a consequence of a lack of food to feed the world’s population. “There is more than enough food in the world to feed our population of 7.8 billion people. But, our food systems are failing, and the COVID-19 pandemic is making things worse,” the UN chief said.

Measures taken by countries to slow the spread of COVID-19 have affected global and national supply chains. Lockdowns have impacted the ability of people to harvest and transport produce to markets. Due to supply chain problems and low price realisations of produce, farmers have resorted to dumping their goods, particularly perishables, as a result of which food wastage has reached ‘damaging levels’.

Containment measures have also led to loss of livelihood of millions of workers impacting their ability to buy food, whose prices are rising and are expected to rise even more as inflationary pressures increase as the global recession gets worse.

Forty-nine million people may fall into extreme poverty, the UN said. Each percentage point drop in global gross domestic product (GDP) could mean 0.7 million more stunted children. Currently, about 20% of children around the world are stunted and this proportion is likely to rise as poverty rates rise around the world. Already, due to lockdowns, 368 million school children were missing out on their daily school meals as of May, the UN said. This could have long-term irreversible heath impacts.

“We need to be careful,” Guterres said. “This is a very different food crisis than the ones we have seen.”

And, as Guterres said, things were already dire before the pandemic. A combination of factors – climate change, pest attacks, plagues and conflict – has already threatened food security in large parts of the world, with the problem the most severe in the developing countries.

An earlier UN report on global food crises had warned of threats to food security due to failing food systems in various parts of the world. The number of undernourished people in the world had in fact increased between 2011 and 2018, from 814 million to 821 million reversing gains made over the past decade.

Listen: How Bad Is India’s Hunger Problem Right Now and What Can Be Done?

People in Africa faced the most severe food insecurity with 20% of its population undernourished. Within the continent, the proportion rose as high as 30% in eastern Africa and was low at 7% in northern Africa. In South Asia, about 15% of the population was undernourished in 2018.

And now, food insecurity stands further threatened due to COVID-19 and the global recession that it has brought, which is expected to stay for the next few years.

Guterres has suggested a three-pronged remedy plan – designating food services as essential, safeguarding access to food and ensuring sustainable and inclusive food systems. The UN secretary general has also said that stimulus packages announced by world economies must focus on and reach the most vulnerable.