Locked Down But Not Out, Hyderabadi Haleem Can Still Be Had this Ramzan

The need for social distancing means crowds cannot throng the outlets and countless food stalls usually serving this signature mutton dish, but cloud kitchens and home delivery have stepped in to the void.

Making haleem, then and now. On the left, a pre-lockdown photo (Credit: Special Arrangement) and on the right, haleem being prepared during the lockdown at Delhi-6 cloud kitchen, Hyderabad. (Credit: Arijit Yadav)

Hyderabad: When we moved to Hyderabad in 2005, a social ‘phenomenon’ which gobsmacked us first-timers was the haleem frenzy which gripped the City of Nizams during the Ramzan season. Come evening, for the entire month, every F&B establishment, starting from the mighty five-starred ones and middling standalones, spiffy and otherwise, to the small makeshift umbrella kiosks (sprouting up not only in and around Charminar, but also in tony localities like Banjara and Jubilee Hills), would dish out this thick, slightly viscous, porridge made of mashed goat meat, lentils and wheat, cooked in ghee and spices and topped with fried mint leaves, onions, a couple of cashews and a wedge of lemon to be squeezed, according to taste.

This calorific delight would then be lapped up by the thronging (and hungry) hundreds waiting in queue from the time Iftar prayers were scheduled. In congested areas like Charminar and Mehdipatnam, there would also be car deliveries by young boys employed by food stalls. This was also the only time of the year when haleem took centre stage, with its more popular cousin biryani taking a backseat, and restaurateurs focussed on making haleem the star dish for a month of profit-making.

This year, however, COVID 19- has played spoilsport to the festive Ramzan spirit, and the  gloom is palpable.  The lockdown has ensured that there will be no traditional festivities in and around Charminar or anywhere, for that matter, as there can be no Ramzan celebration with social distancing norms.

Mohammed Abdul Majeed, owner of Pista House and president of the Hyderabad Haleem Makers Association announced at an online press briefing, “We, as in, all 6,000 commercial haleem makers in and around Hyderabad had to take this painful decision of deciding not to sell haleem this year in a  bid to cooperate with government guidelines as there are three levels of hygiene and safety we have to safeguard, that of our customers, staffers and owners. Social distancing is impossible to achieve during Ramzan and we just cannot take the risk, with so many people involved.”

Majeedbhai, who lobbied for the GI tag for Hyderabadi Haleem which was accorded in 2010, might sound politically correct but considering that he had to forego an extremely lucrative season – Pista House is the single largest seller of haleem and did business of about Rs 10 crore last Ramzan – this is a reflection of the extraordinary times we are living in.

“Ramzan is a source of income and livelihood for many, especially the young and needy, like some students who come from neighbouring rural areas to study In Hyderabad. Besides some decent earnings (commission-based, according to number of haleem boxes sold in various parts of the city), it is good business model training for the young commerce students who used to gain useful work experience. While every year, we do zakat (charity), this year I am focussing on that aspect to the best of my abilities, so whatever cooking is being done is being used for my staffers meals as well as for distribution to the needy and also to patients’ families outside hospitals, “ adds Majeed.

Says young politican and educationist Aamer Javeed, whose iftar parties are the toast of the season, “Undoubtedly, I am missing the Ramzan gatherings and the grand iftar dinners hosted with the kind of hospitality that elite Hyderabadi homes are so used to putting up. But quite frankly, while Ramzan of late has become more about its visible aspects of iftar parties, glittering night markets, melas and cultural shows, the true spirit of the season is about self-introspection and zakat or charity work, paying back society by looking after the most needy. I am quite heartened to see Muslim restaurateurs coming together in Hyderabad to display abundant generosity and look after the hungry and homeless. It took us a lockdown to realise that!” 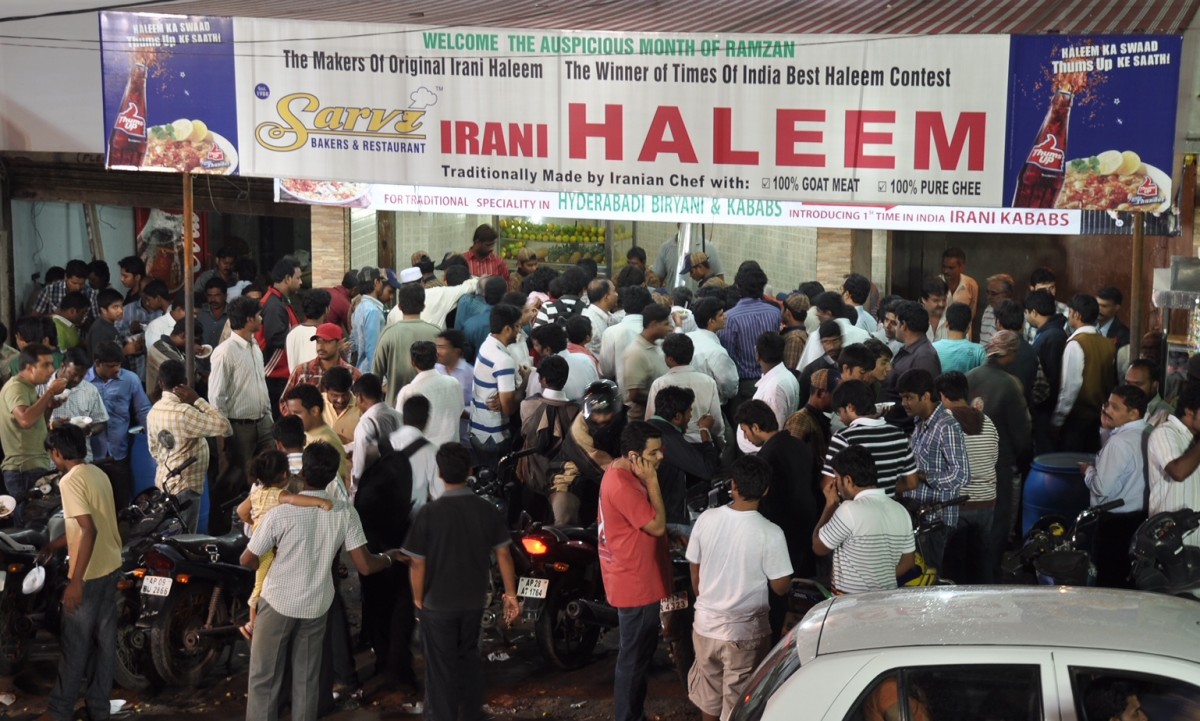 The way life used to be, during Ramzan in the past. Photo: Special Arrangement

For home chef-baker and recipe developer Samyra Ruheen, ‘It is not just haleem or the food, Ramzan shopping in Charminar is an annual ritual for us Hyderabadis. Besides the iftar feasts which are generously spread out in Charminar till the wee hours of the morning, there is wedding apparel and jewellery too, as that’s the time when retailers stock up on their best supplies. I will be missing the shopping and festivities badly this year.”

However, like they say, if “The Mountain will not come to Muhammad, then Muhammad must go to the mountain.” While the big players stay closed for operations, the market is largely left to home chefs and cloud kitchens to cater to haleem-starved Hyderabadis.

For instance, Arijit Yadav, techie turned foodpreneur, who runs his cloud kitchen from a 400 square yards space in High-Tech City has haleem operations firmly in place, after his friends started demanding that he start making haleem instead of the North Indian fare that his flagship brand, Dilli 6, is known for.

Since he already had a Hyderabadi chef on his rolls, from the Old City, who has worked in bigger food establishments, making haleem, as well as the huge haleem cauldrons, (which, while traditionally fired by wood, are in this case placed on gas) and cooked on a slow fire, for a few hours and the stew is beaten around with long wooden sticks by at least two persons.

“There are no delivery partners like Swiggy, Zomato or Dunzo (which is only being used for essentials) operating in Hyderabad at the moment, so I am personally delivering in most cases, respecting curfew timings and the 3 km radius. Where policing becomes an issue, my clients have no problems reaching a mid-way destination as they want haleem, at any cost,” shares Arijit, who has sold close to a hundred kilos of mutton haleem and a little lesser quantities of biryani. “Food costs are also up, so we are left with no option other than pricing the haleem a little upwards, thanks to infrastructural constraints, such as delivery costs and the inconveniences involved,’’ he adds. Despite that, he is selling 40-45 kgs of mutton haleem daily.

Similar with home chefs like Khatija Seema of Our Food Factory, which is known for its Hyderabadi delicacies like biryani, haleem, double ka meetha and sheer khorma. Her techie son Mujtaba Irfan, who helps out with operations says, “We are getting quite a few  haleem orders this year, compared with previous years, though we never focussed on haleem during Ramzan in earlier years, being a smaller unit and not really being in competition with big haleem makers.”

Star hotels like The Park Hyderabad are also scaling down the prices for their cloud kitchen deliveries, of mutton, chicken and jackfruit haleem. The latter is modelled on the mock meat concept “with the jackfruit strands resembling meat in appearance and texture, “ elaborates executive chef Thimma Reddy.  He is, of course, missing hosting and curating the Ramzan walk in and around Charminar which has been an annual occurrence since the last seven years.

But this year that will have to wait, as will the huge quantities of haleem, which ironically enough, means patience.

Swati Sucharita is a Hyderabad-based journalist