The onset of the pandemic has made the situation even more challenging. 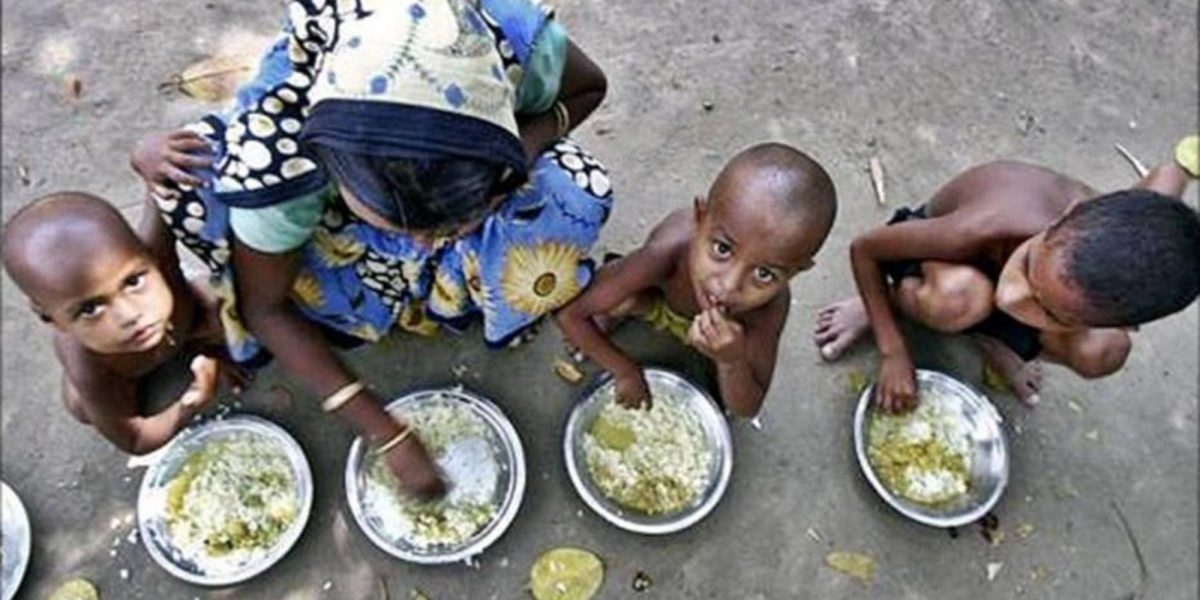 India’s hunger situation is a serious cause for concern that needs the attention of policymakers at the highest level.

According to a 2015 World Bank report, malnutrition in India is two to seven times higher than other BRICS member countries. The same result was indicated in the 2021 report of Food and Agriculture Organisation (FAO) of the United Nations. Further adding that with the current rate of decline, India will not be able t0 achieve the target of ‘zero hunger by 2030’ given by the United Nations (see table 1).

This was the story of pre-COVID-19 era. The onset of the pandemic has made the situation even more challenging. The executive director of the UN Food Programme, David Beasley in 2020 warned global leaders against the looming crisis of hunger. The 2021 Global Hunger Index (GHI) report is a reflection of the same warning. The GHI report came at a time when the world is recovering from the devastation of COVID-19. India slid down to rank 101 out of 116 countries. India fared only better than Afghanistan and the least developed countries of Africa. It fared worse than Bangladesh (76) and Pakistan (92).

Hunger can be defined in many ways. According to the FAO, “While many people may not be “hungry” in the sense that they are suffering physical discomfort caused by a severe lack of dietary energy, they may still be food insecure. They might have access to food to meet their energy requirements, yet are uncertain that it will last, or they may be forced to reduce the quality and/or quantity of the food they eat in order to get by. This moderate level of food insecurity can contribute to various forms of malnutrition and can have serious consequences for health and well-being.”

Hunger is caused by low-level dietary energy due to insufficient consumption. A certain amount of calorie intake (dietary energy) is required to lead a normal, active and healthy life; regular deficiency makes it chronic. The organisation referred to “hunger” as “undernourishment”. Hunger and undernourishment have severe impact on children under the age of five, causing wasting and stunting among them. These two terms are also associated with mortality among the same age group. The GHI score is based on these indicators: undernourishment, child wasting, child stunting and child mortality.

These challenges were manifested in Millennium Development Goals (MDG), a set of eight goals, out of which two goals are concerned with hunger: MDG 1 (removal of extreme poverty and hunger) and MDG 4 (reduce child mortality). Most of the developing countries achieved the MDG1 but failed in MDG4. To finish the unfinished work of MDG, Sustainable Development Goals were adopted with target year of 2030. The second goal (SDG2) called for ‘zero hunger’ and inherited the indicators of GHI. In recent decades the world has successfully reduced the incidence of hunger and starvation but the pandemic has disrupted the path of progress and has threatened to reverse the achievement towards ‘zero hunger’.

So, what is the mechanism to access food? Amartya Sen in 1986 had revealed that methods to acquire food varies from person-to person; a peasant can produce food by investing labour in the field, wage labourers avail it from exchange of their wages with basket of goods including food. Wage labourers first exchange labour power for wages and then wages for commodity collection including food. Similar patterns emerge in other mechanisms to access food. For example, earning from selling services, profits by running business and claiming share in the total output of share-cropping. These exchanges act as fulcrum in ‘access to food’.

Thus, it is important for policymakers to examine the forces that regulate this exchange. Eradication of hunger depends on the adequacy of policy intervention to curb the menace of hunger and starvation. The biggest challenge for policymakers is to free their country from hunger and poverty. Watts and Bohle in 1993 had revealed that poverty and hunger are inextricably linked.

One of the biggest challenges to independent India was hunger. Economic historian Tirthankar Roy rather sarcastically stated that food grain shortage is a gift of the colonial period to independent India. From 1891 to 1946, the average growth of crop outlay was only 0.4% which translated into an increasing number of poor populations along with overall population. Consequently, per capita availability of food fell and the crisis was severe in overpopulated Bengal and resulted in the famine of 1943.

Nehru envisioned a developed India through the development of agriculture. This sector has the potential to eradicate hunger, raise the income by accelerating economic growth since agriculture, industry and services are interlinked. Almost 20% of the public sector plan expenditure was assigned to the agriculture sector during the first and second plan. The importance of agriculture can be witnessed through the surge in credit flow to Rs 2,000 crore in 1975-76 from Rs 70 crore in 1950-51 (P. Balakrishnan, 2007). Nehru’s vision realised through the ‘Green Revolution’ transformed India into a food secure country.

However, whatever progress have been achieved is still not enough as one-fourth of the country is still food insecure.

In 2001, 47 tribals and Dalits were starved to death in south-eastern Rajasthan as the state reeled from its third consecutive year of drought. This happened despite India’s warehouses were brimming with an excess of around 40 million tonnes of foodgrains that year. This led to the ‘right to food’ case, in which the Right to Food Campaign, a civil society network of activists and organisations, moved the Supreme Court to secure food security for Indians.

The apex court in its ruling in People’s Union for Civil Liberties v. Union of India & Others, taking reference from Article 21 (ensure dignity of life) in light of Article 47 (ensure wellbeing of citizens is duty of the state) of the Constitution of India, provided a legal framework to both the articles. The then UPA government has enacted Mahatma Gandhi National Rural Job Guarantee (MGNREGA) Act 2005 and National Food Security (NFS) Act 2013 , to provide direct benefits to the poor. Prime Minister Narendra Modi had disregarded MGNREGA as a ‘living monument of UPA’s failure’ and other governments had also neglected the NFS initially.

The COVID-19 pandemic, however, led the Modi government — which has failed to provide a clear economic policy on ‘food insecurity’ — to sanction an additional Rs 40,000 crore to MGNREGA to fight against hunger and unemployment. Through NFS, the government has also started to distribute lentils to maintain nutrients among the beneficiaries.

There is an urgent need for immediate policy intervention to uplift the poor from hunger and deprivation. There is a great need to revamp the existing policy, according to current requirement, as Keynes said that in the time of crisis, the government must solve the problem by immediate intervention rather than “wait for an invisible hand to fix the problem” because, as he succinctly puts it, “in the long run we all are dead”.