How Can India Plug the Food Wastage Hole at the Consumer and Retail Level?

While India ranked 94th of the 107 countries on the global hunger index in 2020, a whopping US $ 14 billion worth of food products are wasted annually in India. Note: This is the third article in the three-part series on losses in India’s food supply chain. The other parts can be read here and here.

While 2020 experienced the worst impact of the COVID-19 pandemic, its adverse effects on the poor and vulnerable population will linger on for several years. In the immediate aftermath of the lockdown, the Centre expanded the food security net as an interim measure.

While it was an important temporary measure, more broadly speaking, reducing India’s food wastage should also be viewed as an important cog in the broader food security framework.

In advanced countries, the wastage of food is partly due to strictly adhering to the ‘shelf life’ of food products as mentioned on the package. It is also due to the requirement of food retail chains to ensure that even perishables meet aesthetic standards in terms of colour, shape and size.

However, wastage of food at the consumer’s end is also due to excess buying. This is often influenced by large portioning and package sizes in cash-and-carry stores that offer bulk discounts. Wastage also takes place due to confusion over labels showing best before and best use by date. Finally, food is wasted in homes due to discounts offered on bulk buying, poor storing practices and lack of proper refrigeration, etc.

Indian case and the UK example

For India, at present, there are no formal estimates for the food wasted at the retail and consumer-levels. However, a report of 2018 highlights that the food wasted in India is as much as the total food consumed in the United Kingdom (UK).

According to another estimate, about 10% to 20% of the food at weddings in India goes waste and the annual food waste is nearly US $ 14 billion. In a country, which is one of the worst performers on the global hunger index, ranking 94th out of 107 countries in 2020, this is one of the most worrisome examples of wastage of food and possibly irresponsible consumption, mostly by the rich. 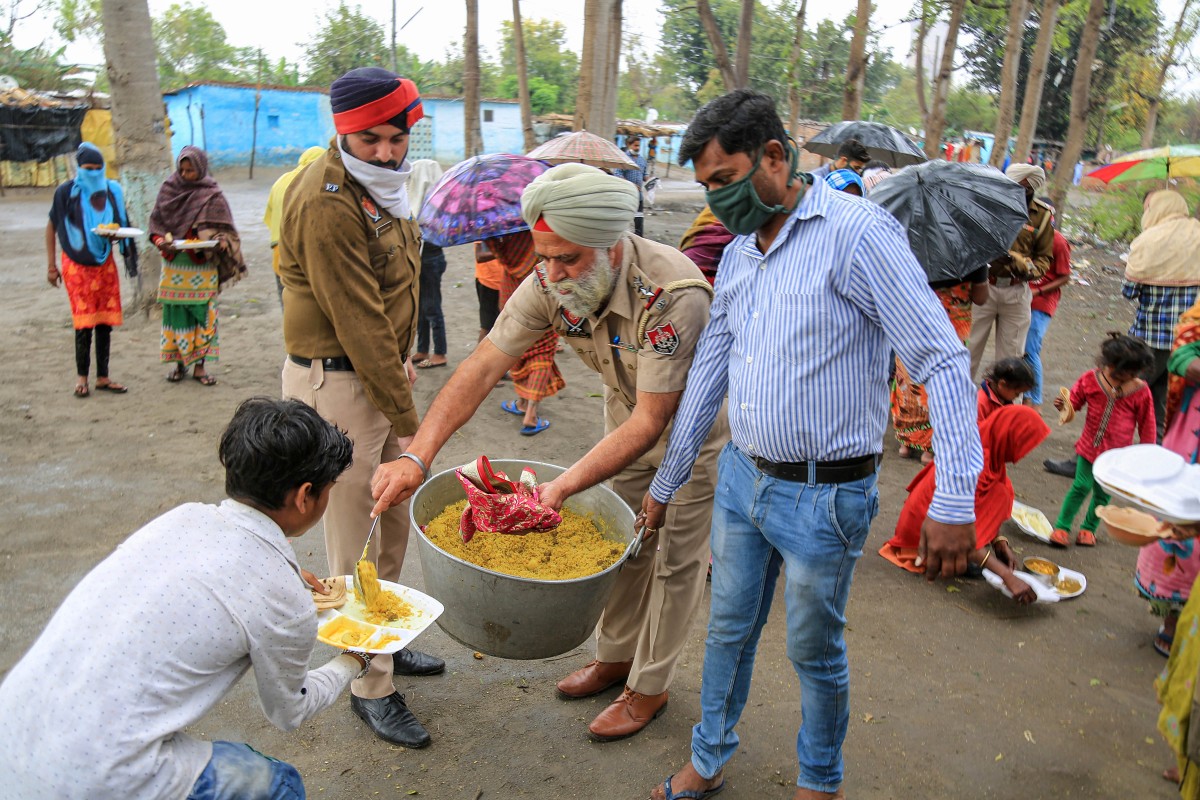 Police in Bathinda serving food to the poor during the lockdown. Photo: PTI

In such a scenario, it is worth looking at other countries and learning from their experiences. The UK, which is a G20 member, is one country that took a serious initiative to reduce food wastage. Set up in 2000, the WRAP (Waste and Resources Action Programme) has made an enormous contribution to drawing attention to food wastage and the means to prevent it.

In 2008, it published a report ‘the food we waste’ which highlighted several aspects of the UK’s food wastage.  Some of them are:

Since 2007, the UK has implemented serious interventions at various levels of wastage, including stakeholders across supply chains and households. WRAP estimates that excluding the inedible part of food, the post-farm-gate food wastage has come down by 21% between 2007 and 2018.

There are also some initiatives in our neighbourhood to address food wastage. About six million tonnes of food is wasted in Pakistan, a lot of it during weddings. Pakistan enacted the ‘Guest Control Order’, which is in place for the last 15 years. The country follows a one-dish rule, limiting the variety of food that can be served during weddings. However, several media reports suggest that this rule has been a failure in Pakistan.

In India also, several states, including Assam, Delhi, Jammu and Kashmir, Mizoram and Rajasthan (Sriraman, 2013), enacted guest control laws in the 1960s and 1970s, but after liberalisation of economy in 1991, big fat weddings, with multiple functions, have become the order of the day for the rich. Even middle-class weddings may have 500 to 1,000 guests. Moreover, the guest control order was never an enormous success in bringing down the number of the guests invited, and the implementation was marked with difficulties (Sriraman, 2013)

In August 2020, China launched the clean plate campaign under which serious efforts are being taken to reduce the wastage of food. For example, the Wuhan Catering Industry Association has asked the restaurants to limit the number of dishes served to guest to one dish less than the number of diners.

In India also, the Supreme Court was considering the waste of food in the case related to the Blue Sapphire motel. Here, it was noted that there were around 300 marriage halls in Delhi and during the auspicious period of marriages, around 30,000 to 50,000 marriages take place on a single day.

In November 2018, the Delhi government informed the Supreme Court that it was considering a policy to impose a restriction on the number of guests who could be invited to “extravagant” weddings so as to minimise wastage of food. It is not known if the Arvind Kejriwal government has finally enacted a law to reduce food wastage.

COVID-19 pandemic has no doubt brought down the number of guests at marriages and other functions, but, as soon as normalcy returns, the weddings may see a higher number of guests than earlier. This will result in even more wastage of food.

In India, some steps have been taken by the government, civil society organisations and private businesses to reduce wastage of food.

The Food Safety and Standards Authority of India (FSSAI) has launched the save food, share food, share joy initiative for the distribution of food that could be potentially wasted. To generate a large-scale impact, it is important for FSSAI and state governments to leverage the civil society networks working at the grass root level. There is a need to trust the efforts of the civil society member, support them and partner with them in such initiatives. At present, the impact of the existing efforts seems to be marginal.

There is a need for a much stronger push from the political leadership, perhaps on the lines of Swachh Bharat Abhiyan to create a noteworthy impact and set an example for other countries struggling with similar issues.

It is also high time that India created a system for generating robust data on quantum and mechanics of food wastage in India. The initiative for mounting a comprehensive study will have to come from the government as NGOs and civil society organisations are already feeling the heat due to a stifling regulatory regime.

By 2030, the SDGs target reduction in global food wastage at consumer and retail end by half. As explained in previous articles, food wastage is different from food loss (that takes place in the core supply chain). Food wastage is defined as the loss of quantity or the deterioration in the quality of food at the end of retailers, food service providers and consumers (FAO). In India a lot of food wastage takes place in restaurants, marriages and parties.

Linking the issue with the rising food security and nutrition challenges, the G20 Summit held in Turkey in 2015 urged the G20 members to make more serious efforts to reduce food loss and wastage. This led to the establishment of the G20 Technical Platform of Measurement and Reduction of Food Loss and Waste in 2015.

The last meeting of the G20 Agriculture Ministers in September 2020, held virtually in the wake of the Covid-19 pandemic, again highlighted the need to safeguarding food security and nutrition.

In 2023, India will take over the presidency of G20 and it will only be appropriate for India to highlight the importance of reducing food loss and wastage.

A partnership with civil society to mobilise public opinion to substantially reduce the wastage of food can deliver significant results in the run-up to the G20 summit in 2023.

Siraj Hussain retired from the Indian government as Union agriculture secretary, and is currently a visiting senior fellow at the Indian Council for Research on International Economic Relations (ICRIER). Tanu M. Goyal is a consultant with ICRIER.