Nearly nothing is well fought for or earned. Everything just happens – as a result, we’re barely invested in the story or the fates of the characters.

Life, at most times, makes little sense to Bauua Singh (Shah Rukh Khan). He is 38-years-old, unmarried, and a school dropout. At 4 feet 6 inches, the world constantly towers over him. To make matters worse, his only ambition — winning the affection of a Bollywood star Babita Kumari (Katrina Kaif) — is, even at the outset of thinking, too impractical.

This is the world of Aanand L. Rai’s Zero, where an unfortunate everyman dreams with the fire of an aggressive over-achiever.

You can’t doubt its hook: a Bollywood star shrunk in size, playing a hero. More so, when the genre was once both, Khan’s home and playground – where he was comfortable enough – that in many movies, the audiences didn’t mind his repetition of personas. But that’s not the case with Zero. Saddled with a conspicuous physical limitation, Bauua demands something else from the actor: reinvention.

Any actor, though, needs to be oriented by the director, for it’s his or her vision that sets the stage. Rai (directed Tanu weds Manu, Raanjhana), however, seems enamoured by his own idea. Zero’s first few scenes have several references to Bauua’s height. He’s derided, called a “bauna [dwarf]” – markers that slot him as ‘different’.

You can almost imagine Rai exclaiming, “Look, look, I cast Shah Rukh Khan as a dwarf!” Bauua’s family and friends, in fact he himself, refer to his height so frequently that you’d think that it’s a new phenomenon meriting constant discussion, when that’s not the case.

These scenes, therefore, don’t advance the plot or reveal characters; they exist to make the audiences laugh, compromising the film’s credibility and exemplifying the director and screenwriter’s (Himanshu Sharma) reluctance to interrogate the finer aspects of their story.

We’re then introduced to another character – a space scientist with cerebral palsy – Aafia Yusufzai Bhinder (Anushka Sharma), whom Bauua spends a considerable time wooing. Rai’s men are often entitled and lack grace, and Bauua is no different. She turns away; Bauua follows. She refuses; Bauua pesters.

There’s something cold and calculating in the way Rai approaches love – as if it’s a mathematical problem to be solved and conquered. What’s worse: Khan isn’t young anymore and, in the absence of new acting skills, looks like a misfit. What was charming in the 1990s, looks creepy (and crass) in 2018. 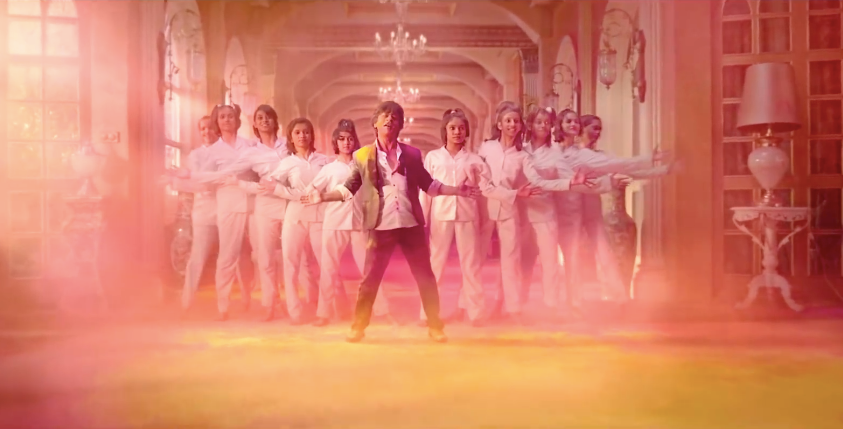 Then there are other elements, such as needless songs and overlong scenes, that suffocate the film and make it monotonous. In 2018, you need to have several solid reasons for your film exceeding the two-hours run time; Zero clocks in at 164 minutes without one good reason.

More disappointments await. The film’s second major subplot – centered on Bauua and Babita (Katrina Kaif, playing an alcoholic actress) – is so devoid of originality that it elicits nothing but eye-rolls and yawns. Bauua, hailing from Meerut, not just meets Babita (a dance competition is his gateway) but also becomes her close friend, staying with her, attending high-profile parties, in no time.

Rai also tears a page from Farah Khan’s book and gives us a series of pointless guest appearances: Salman Khan, Alia Bhatt, Deepika Padukone, Kajol, Rani Mukerji, Karishma Kapoor, even Sridevi. If Rai’s intention behind making this movie was to show the world that he’s ‘made it’, then Zero definitely meets its purpose.

The film’s climax, though, does come as a surprise. Bauua travels to NSRA (an organisation modelled on NASA) to express penance. Given the stakes involved here, this could have been a powerful final note, but it is wasted on a film that is all surface and no depth. Like the Bollywood segment, the climax is a litany of conveniences, propped by contrived plot points.

Nearly nothing is well fought for or earned. Everything just happens – as a result, we’re barely invested in the story or the fates of the characters. But more importantly, Zero, with an intriguing premise, does nothing for the genre of romantic drama. It has all been done before – man negging the woman, songs for every occasion (Holi, courtship, heartbreak), an old Bollywood number remixed – and, as a result, the film is constantly tiresome.

Khan has been trying to reinvent himself for quite some time now. But besides Dear Zindagi (where he played a supporting role), his other efforts – Fan (2016), Raees (2017), Jab Harry Met Sejal (2017) – have been critical and commercial failures, casting serious doubts on his longevity as a star.

Maybe he doesn’t seem to care, because he doesn’t learn from his mistakes. Zero in fact, which is considerably worse than Fan and Raees, has just one scene of significance – where Bauua and Aafia are floating in a zero-gravity lab, addressing grievances and discomfort, amid the dramatic license of science. A few moments of beauty in a nearly three-hour long film. Do the math and wonder in disbelief.