Like the 19th century showmen, today's big cat exhibitors claim they are not mere entertainment, but provide opportunities for enlightenment to legitimise their business and distance themselves from allegations of animal abuse. 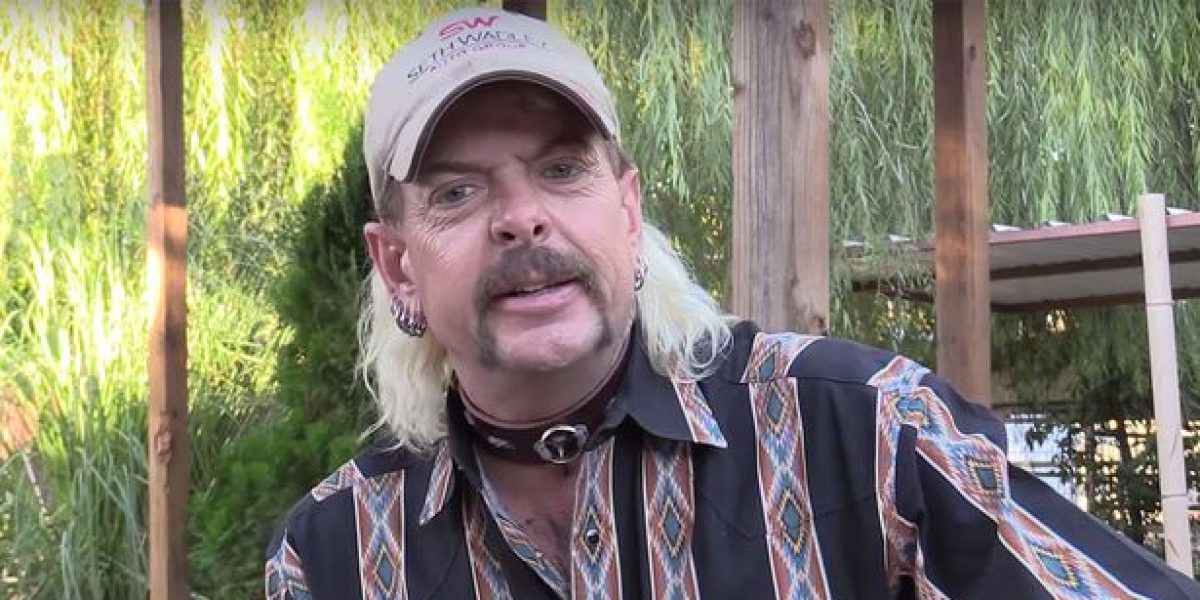 “I am never gonna financially recover from this,” grumbles Joe Exotic, the subject of Netflix’s Tiger King documentary series.

Joe Exotic, whose real name is Joseph Maldonado-Passage, blithely utters the line after one of his employees has been brutally mauled by a tiger, making him seem comically indifferent to the man’s suffering.

This lack of compassion isn’t unique to Joe Exotic. As a self-proclaimed “gun-toting gay redneck” and the former operator of a shabby wildlife park, he may seem like the furthest thing from a cutthroat capitalist.

But I study 19th-century showmen like P.T. Barnum, and as I rewatched season one of Tiger King to prepare for the new season, I was struck by the similarities between my research subjects and the larger-than-life world of Joe Exotic.

These impresarios also had money on their minds. And like Joe Exotic and the other flamboyant big-cat aficionados of Tiger King, they weren’t strangers to fierce competition, threats and bizarre drama.

In Tiger King, viewers learn that Joe Exotic is part of a larger network of big cat exhibitors who regularly trade and sell animals to one another, often in violation of the Endangered Species Act.

The groups include characters such as Bhagavan “Doc” Antle, the elephant-riding, polyamorous owner of Myrtle Beach Safari wildlife park, who is currently under indictment for felony wildlife trafficking. There’s also Jeff Lowe, who purchased Joe Exotic’s zoo and is also facing charges in Las Vegas related to possessing exotic animals without permits. Carole Baskin, Joe Exotic’s archnemesis, aims to take down this network of breeders and traffickers by pushing to ban the private possession of big cats.

In the 19th century, when the total number of exotic animals in the country was much lower, big cat exhibitors didn’t have to smuggle cubs. In fact, back then, the big cat trade network actually included legitimate scientific institutions.

In 1895, James A. Bailey of the Barnum & Bailey circus was involved in a dispute with Frank Baker of the Smithsonian National Zoo over a trade involving two lions.

From Baker’s telegrams to Bailey, it’s clear that Baker felt the showman scammed him. When the circus representative arrived at the Smithsonian with the feline cargo, Baker “was very much surprised to find that he did not bring with him the lion which [Bailey] agreed to let me have but a smaller one.” Baker felt duped and demanded they trade back, but Bailey refused, accusing Baker of giving him an inferior lion.

Despite continued demands from Baker, Bailey didn’t budge, and in the last letter of their exchange, an exasperated Baker folded – but not before writing in a delightfully passive-aggressive, 19th-century manner that “I agree to accept the exchange of lions notwithstanding the fact that you have endeavoured to force it upon me without my consent.”

The circus’s relationship with the Smithsonian hints at another parallel between 19th-century circuses and today’s wildlife exhibitions: Both attempt to blur the line between entertainment and education.

By claiming that they are not mere entertainment, but opportunities for enlightenment, animal exhibitors then and now have sought to legitimise their business and distance themselves from allegations of animal abuse.

Joe Exotic, “Doc” Antle and Carole Baskin all claim in Tiger King that their work is truly about educating the public about endangered species – that, deep down, their primary motivation is to promote conservation efforts. They all attempt, with varying success, to use the veneer of education to distance themselves from stereotypes that their roadside zoos are seedy and rife with abuse.

In the increasingly capitalist society of the late-19th century, promoters like P.T. Barnum wanted the circus to appeal to as many customers as possible. So he and his peers began emphasising the educational potential of their shows. This was not merely a display of animals doing tricks, they’d insist; this was, as an advertisement for Barnum & Bailey’s circus proclaimed, “better than a college for rare knowledge.”

Back in the day, Barnum even went so far as to call his animal keepers “professors,” a title eerily similar to that of the questionable “Doc” Antle. 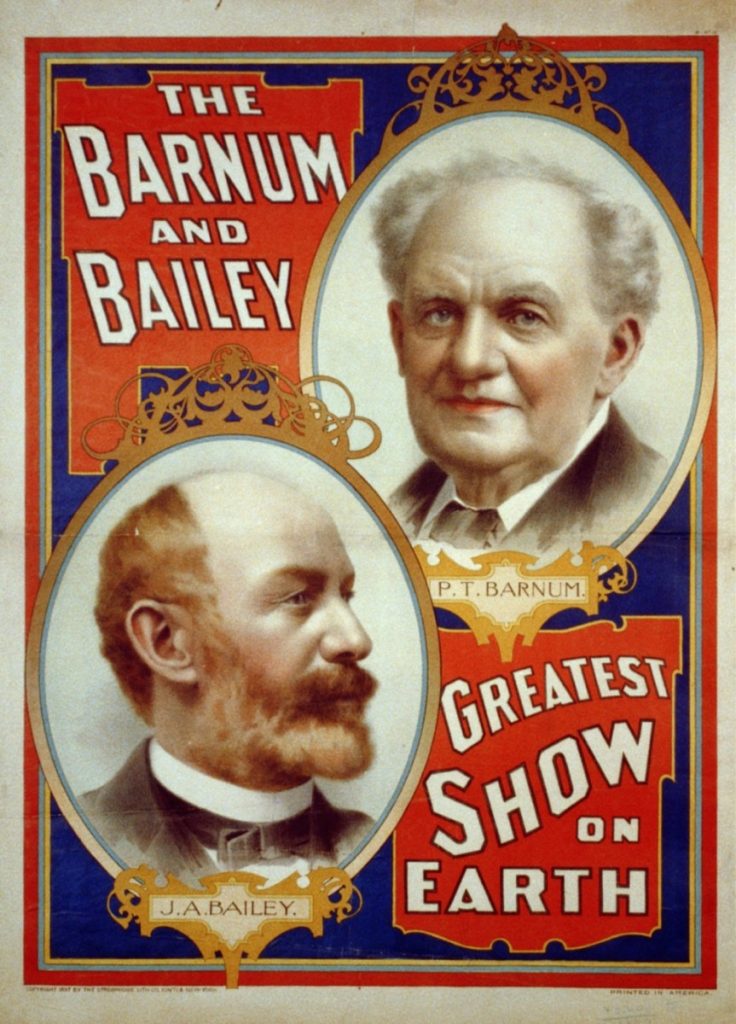 A poser for the Barnum and Bailey Circus. Photo: Library of Congress/ Wikimedia Commons, Public domain

Joe Exotic was a travelling showman for a while, taking a small exhibition of tigers on tours of local shopping malls and other small venues. Amusingly, Exotic called this venture Big Cat Rescue Entertainment, an obvious reference to rival Baskin’s organisation, Big Cat Rescue Corporation.

The petty move on Exotic’s part is once again something that could have come from a Gilded Age showman’s playbook.

Nineteenth-century entertainment impresarios often published notices in trade papers warning others to be on the lookout for fraudulent companies masquerading under the name of another well-established show, such as when the popular Sells Bros. Circus took the Sells-Floto Circus to court over the latter’s use of the Sells name, despite having no owner by that name.

In one case, a rival circus put together an entire pamphlet full of insults directed at Bailey, with lines like “J.A. Bailey, you are a thoroughly exposed, convicted, baffled, beaten, desperate and crazy fraud.”

And in an insult that sounds like it could have come straight from Exotic’s lips, the pamphlet added that even Bailey’s “performing lions are cringing, crawling, sneaking frauds.”

While I have yet to come across any archival information suggesting my research subjects were involved in any murder-for-hire plots – Exotic is currently serving a 22-year prison sentence for trying to have Baskin killed – I have seen rival companies being accused of literally burning bridges to hamper their competitors.

Describing the competition between shows as “opposition warfare,” W.C. Coup, a business partner of P.T. Barnum’s, once wrote that he suspected a rival circus of destroying a bridge to prevent their train from arriving on time for their gig. Although he had no proof, Coup wrote that he “knew [his competitors] were driven to desperation and were capable of resorting to any such outrage.”

That’s just a small sampling of the entertaining and sordid anecdotes that can be found in archives devoted to Gilded Age show business.

Perhaps it’s time for the circus to get the Netflix treatment.