Vivek Ranjan Agnihotri is emerging as the favourite filmmaker of the BJP and has received the party’s full support. 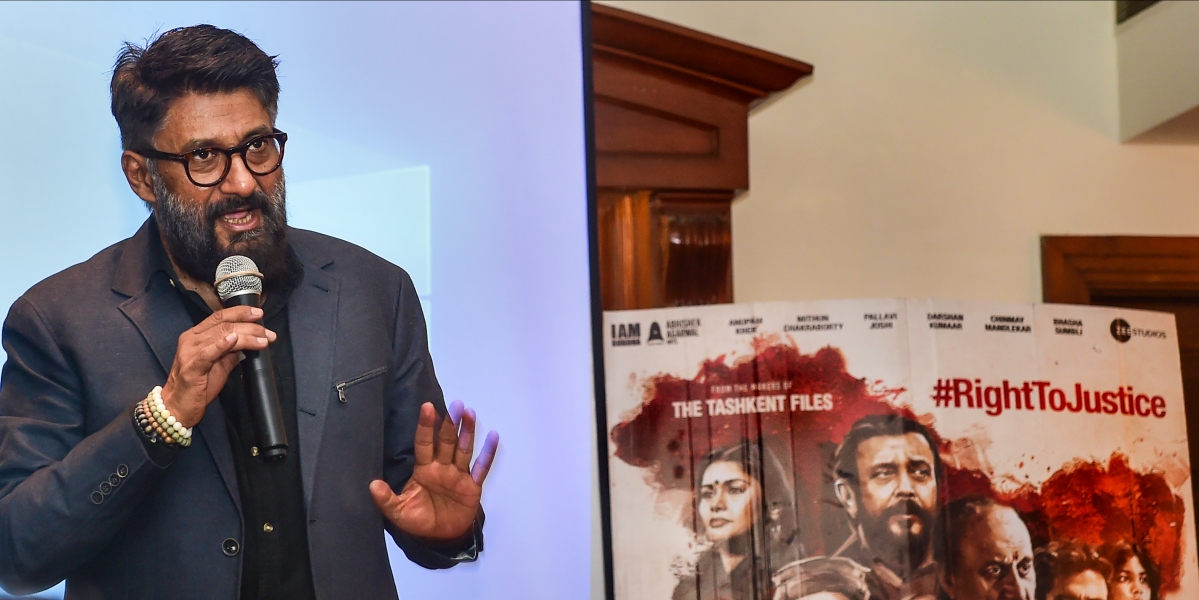 Leni Riefenstahl’s Triumph of the Will (1935), on the Nazi Party congress attended by 700,000 supporters in Nuremberg, is said to be one of the greatest documentaries ever made. It is a masterclass not just in cinema, but also in propaganda, as it shows the idealised version of German manhood – blonde, blue-eyed, fit – and the impeccable organisational skills of Nazi Germany.

Adolf Hitler commissioned the film and was the executive producer. Riefenstahl, who had been an actor in commercial films, was by then Hitler’s favourite director and a great propagandist of the Third Reich. She made another acclaimed documentary, Olympia (1938), on the 1936 Olympics, held to showcase Nazi Germany to the world, where the African American athlete Jesse Owens won four gold medals and ruined the dictator’s myth of Aryan supremacy. This got her even more worldwide praise and awards for path-breaking film techniques, sealing her place in the pantheon of filmmakers. Through this, she remained an unapologetic propagandist.

In Vivek Ranjan Agnihotri, the BJP may have found its own Riefenstahl, even if he falls far short of her filmmaking standards. With The Kashmir Files, Agnihotri has become the BJP’s favourite director and its messaging and aesthetics are in full tune with the party’s own, something which is borne out by the full-throated support Narendra Modi and his followers have extended to the film.

When was the last time a prime minister spoke up so fulsomely about a film and lashed out against its critics? Chief ministers of many BJP states have given it tax exemptions.

The film is about the exodus of Kashmiri Pandits from the state after terrorists began targeting the community after militancy broke out in 1989. Thousands of them left their homes and dispersed to other parts of India. The total number of those killed varies according to research by different groups, with the Kashmir Pandit Sangharsh Samiti saying that 399 were killed from 1990 to 2011, 7% of them in the first year itself. Since then the total has gone up to 655. Other estimates range from 700 to over 1,300.

The film suggests many more died and blames the exodus on – not necessarily in this order – the Congress, liberals, human rights wallahs, Naxal sympathisers and of course Muslims – in other words, the usual suspects blamed for the ills of this country. JNU, according to him, is a hotbed of enemies of the nation. All this said loudly and repeatedly, often ignoring the facts. Agnihotri blames Rajiv Gandhi but the truth is that the BJP-supported V.P. Singh government was in power in Delhi. Jagmohan as governor – fully backed by the BJP, which he later joined in 1996 – had a free hand from January 1990, because there was no state government in place to ask him questions.

Besides, the film provides no historical context and ignores the fact that hundreds of Muslims were also killed by the terrorists, including members of the National Conference, whose leader Farooq Abdullah is berated by Agnihotri. In between, the film also sneaks in a suggestion that had Article 370 been removed, as it was in 2019 by the Modi government, the exodus and the killing wouldn’t have happened. It is an angry WhatsApp rant, with no regard for facts, brought to the big screen. The scale of the killings is exaggerated, presumably because Agnihotri thinks the word ‘genocide’ is only about numbers.

This clearly syncs well with the BJP’s own worldview and its list of enemies of the nation – anti-nationals who are nothing short of treasonous.

Also Read: Book Extract: The Story of the Pandit Exodus Through the Eyes of a Kashmiri Pandit

The film is exploitative in the extreme, made to rouse emotions and build up a particular mood against Indian Muslims. Watching it, it is not difficult to get carried away against the “murderous Muslims” who show not a shred of humanity. Not surprisingly, Mehbooba Mufti, whose father Mufti Mohammed Syed was the Union home minister, has said the BJP is weaponising the pain of the Pandits.

For Agnihotri, the list of his enemies and jealous rivals does not stop there. He has been going all guns ablaze against those whom he thinks have not acknowledged his commercially hit film sufficiently — his own colleagues in the industry, the media and film critics specifically. The implication is that they have an inbuilt prejudice against him.

Agnihotri is entitled to his point of view, but he protests too much because many critics have said complimentary things about the film too, saying that it holds the viewers’ attention. At the same time, these reviewers also point out flaws, saying that facts have been falsified. Agnihotri had once said “who said facts are facts” so he may well wonder what the fuss about his film is about, but alas, the rest of us are nitpickers who care about things like facts.

Yet, there is something to be said about the noise – some organic, some manufactured – that Agnihotri and his film have generated. He doesn’t let up, constantly doing something to keep The Kashmir Files in the public eye. He claimed recently that the US state of Rhode Island has “officially recognised Kashmir Genocide” because of his film. This claim too is suspect.

The film is drawing not just audiences but also bad behaviour. There are reports of  aggressive nationalistic slogan shouting in theatres. Viewers are certainly engaging with the film.

Of course, the backing of no less a personage than the PM and the chief ministers of several states helps, but even if that hadn’t been forthcoming, Agnihotri would have managed with his marketing and self-promotion skills.

There is little doubt that the BJP is going to milk The Kashmir Files for whatever it is worth. It will also help them by drowning out legitimate questions about why even BJP governments in Delhi and now central rule in Kashmir failed to help the beleaguered Pandits get some form of justice. Most Pandits have made successful lives for themselves in other parts of India and the world. They may yet want some form of justice and closure, but so far no government has shown any inclination to provide either.

These nuances of complexities are not for Agnihotri. His intention is to hammer a few points and the many prejudices he apparently holds. And he is succeeding. His best is yet to come. Other filmmakers who have made hyper nationalistic films are all very well, but this is the real thing. From now on, it is Agnihotri all the way.