'The Girl on the Train': A Train Wreck of an Adaptation, Aided by Bad Acting, Sloppy Direction

A still from Ribhu Dasgupta's 'Girl on the Train'.

Adapting a popular novel into a feature film has an inherent safety net, because even if the making is sloppy, the foundation is solid: a good story. But some recent adaptations, such as A Suitable Boy and The White Tiger, dent that notion. Now Ribhu Dasgupta’s Netflix film, The Girl on the Train, adapted from Paula Hawkins’ bestselling novel of the same name, lowers the bar so much that the ground recoils in second-hand embarrassment.

The thriller is centred on a young lawyer, Mira (Parineeti Chopra), whose life is falling apart. She has had a miscarriage, quit her job, and gotten a divorce. This unfortunate mélange turns her into a Bollywood alcoholic. She drinks on the streets. She drinks from the bottle. She drinks and whines. She drinks till she’s not fine. She takes a train daily. She says she’s so lonely. Alcohol can harm; Chopra can ham.

On her journeys, she sees a young woman outside (Aditi Rao Hydari) living a seemingly perfect life – a loving husband, a nice home – making Mira nostalgic about her past. If you didn’t get this the first time, don’t worry, Mira will repeat it again – and again.

One day, Nusrat disappears. Mira doesn’t take it in the right spirit: she drinks some more. Since the film is set in London so, quite naturally, almost everybody is of South Asian descent and speaks Hindi: Nusrat (Hydari), Nusrat’s husband, Nusrat’s therapist, Mira’s therapist, the investigating cop, her assistant, a shady dance instructor, a lawyer – and several others. At one point, Mira attends, what seems like, an Alcoholic Anonymous meeting, spilling her sob story (in Hindi). An old white man sits next to her, wearing a pained expression, oozing endless empathy. You don’t question whether he understands the language. You don’t question why Mira is talking in Hindi in a meeting in London. This isn’t a film as much as a force of nature: there’s no point wondering; it just is.

Such constant incompetency sullies the excellent source material. Hawkins’ novel was an intense seesawing thriller. The book’s protagonist, a spiralling unreliable narrator, battled gargantuan challenges: alcoholism, slippery memory, gas-lighting. She mustered a fight but relapsed. She assembled a part of the puzzle but realised that the pieces had changed. Hawkins fleshed her out in small excruciating moments, placing us in her head: We lived her pain; we searched her memories; we cheered for her.

Dasgupta could have used this opportunity to tell a rare alternate story: of domestic abuse and manufactured insanity, of mental health and vicious addiction. But that would have required sharp filmmaking and acting.

Chopra is a huge let down, slipping into needless monologues. She’s such a shrill incoherent mess that it’s impossible to see her as a real person. She writes “bitch” on the bathroom mirror referring to Nusrat. She turns up at her house, fuming and swaying. She records a video on the phone, saying she’d smash her head. Even when Mira knows that the cops are after her, she doesn’t delete the clip. You don’t know why. You can’t know why. You feel bad for the film; you feel bad for yourself.

The movie butchers the novel. Hawkins told this story from three points of view – each character getting a separate chapter – heightening uncertainty and confusion. The film is clueless about the shifting perspectives. We’re in Mira’s head for quite some time, then cut to (a long dead) Nusrat, then back to Mira, and on and on. It also drops contrived red herrings. When Nusrat is fighting with her husband, he says, “One day, I’m going to kill you.” Mira, too, is an obvious suspect – and if you’ve seen enough thrillers, you’d know that the film is just wasting its time. Some scenes are ludicrous. Sample the following exchange:

Therapist: “Imagine you could fly, where would you fly to?”

You can’t even throw something sharp at the screen: this is a Netflix release; you’ll have to buy a new laptop. 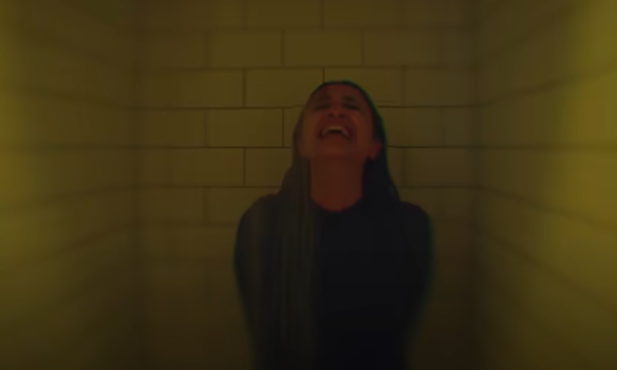 This film is beyond redemption, but it goes off the rails when it adds a new subplot and twist – not present in the novel – that dilutes the story’s essence, reducing it to a generic revenge drama. The new segment also strains credibility, featuring bizarre character motivations. Unlike the novel, which derived suspense from the protagonist’s internal struggles, the film spends an inordinate amount of time on the police investigation, robbing it of intrigue.

Towards the three-fourth mark, the film just gives up.

When Mira is trying to make sense of her past by talking to acquaintances, finally coming to realise that she was living in an addled parallel world, this tense passage suddenly turns into a quasi-soft song. This bit is so abrupt, so tonally off, that it feels you’ve entered a different movie.

This is ingenious, tiered mediocrity. This train wreck of a film doesn’t know when to stop.