The series is well researched, and real life comparisons are inevitable. 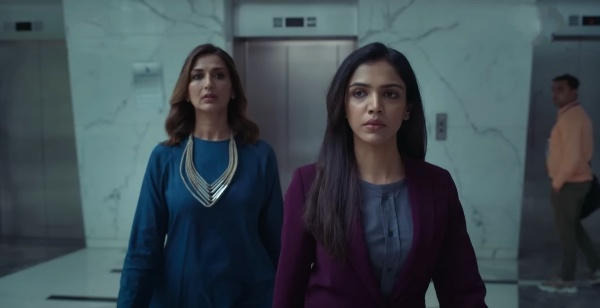 A still from 'The Broken News'.

Dipankar Sanyal (Jaideep Ahlawat), a broadcast journalist, has one main job: getting angry – very angry – at 9 pm every night. Some journalists are news anchors; Dipankar is ‘news anger’. Heading a famous channel, Josh 24×7, he doesn’t follow as much as creates news.

He has no dearth of villains: an ‘anti-national’ businessman, a female politician who once made a personal sex tape, a poor man accused of rape. He began his career as a reporter with a rival channel, Awaaz Bharti. It’s led by a conscientious editor, Amina Qureshi (Sonali Bendre), who prioritises facts over TRP’s. Josh 24×7 is soaring, Awaaz Bharti sinking. Spanning eight episodes – each clocking in around 35 minutes – The Broken News examines the current landscape of Indian journalism.

I am sure you can spot a few references in the above paragraph – and they comprise just a small sample. The Broken News’ resemblance to real life functions both as an asset and a distraction. On the one hand, many scenes sound disconcertingly relevant. Just take its opening scene for instance: A young journalist, Radha (Shriya Pilgoankar – an excellent performance), says the following, moments before getting arrested, “Opposing the government does not mean opposing the nation. I’m a patriot.” On the other hand, however, when characters didn’t behave like their ‘real-life counterparts’, I almost broke into a low-key disapproval, forgetting that it’s a fictional piece, which has all the rights to create its own characters and world.

Besides the tussles between the two channels framing the main narrative, The Broken News is about several other battles – the fights to prove yourself, to save yourself, to not sell out, to uphold the spine of the fourth estate. A reporter at Awaaz Bharti, Radha is idealist and relentless, sniffing the trails of a burning mall story that killed her best friend and flatmate, Julia, a fellow journalist. A case that’s related to a mega political conspiracy, Operation Umbrella (whose mechanics, we find out later, has distinct echoes of a recent, real scandal). As the series progresses, we meet a bunch of characters – some related, some unrelated, to the main story – Maharashtra’s home minister, a rape-accused Bollywood star, a shady tycoon, Dipankar’s boss, and more.

The Broken News is a series about our schizoid world: the contrasts between real and fake news, courage and cowardice, journalism and PR. It’s pivoted on ideas whose time has truly come. These stories play out daily on our TV’s, on our social media feeds, in conversations among friends and colleagues. These stories have defined (and distorted) our world.

That said, however, I approached this series with sizeable skepticism. Over the last few years, especially the last two, the Hindi OTT scene has been largely disappointing. Besides a few stirring successes, it has fast devolved into a space that tackles fascinating ideas but doesn’t do justice to them. Or, simply put, these makers have found newer ways to be mediocre – a longform mediocrity (devoid of songs).

Expecting a piece high on sensationalism and low on research, I was surprised by The Broken News. But it is evident that director Vinay Waikul and writers Sambit Mitra and Purva Naresh have dug deep. Their characters don’t toss around expositional lines, patronising the audiences. They understand the impact of broadcast journalism – and the terrifying extents deployed by editors to reach their sordid ends.

A Josh 24×7 story, for instance, almost gets a man murdered by a lynch mob. Dipankar calls a businessman ‘anti-national’ because a Dubai-based investor funds his firm; the interview is crosscut by the animated visuals of the man wearing a prayer cap (remember the Tablighi Jamaat COVID-19 coverage?). Later, covering a #MeToo case, Dipankar directs an employee to create an animated sketch of a sexual assault. The Broken News understands the game of ‘manufacturing consent’ – the disdain these journalists have for those who have made them successful: their audiences. It probes the storytelling mechanics of people like Dipankar – that they’re not competing with other news channels but with saas-bahu serials, that news without ‘entertainment’ is not news at all.

The Awaaz Bharti people are no saints, either. When Amina is pressured to save her channel, she blurts out some shocking lines. Some character transitions (or the lack of them) are superb. A big chunk of the show revolves around a cat-and-mouse game between Dipankar and Radha: He keeps telling her to join his channel, she keeps refusing him. At one point however, giving up on Amina, she walks up to the main door of Josh 24×7 and then…turns back.

It also interrogates morality in all its expanse. A regular office conversation, between Amina and her colleague (Indraneil Sengupta), starts off as a discussion on real and fake news, then segues into something unexpected – the real and fake facets of their lives – that they’re having an affair (making his marriage a complete sham). The subtle transition makes the scene good; the fact that none of them utter the word “affair” makes the scene great. The writing shines the most while depicting Dipankar. Modelled on you know who, he first seems predictably immoral and TRP hungry, insulting his employees, bribing his sources, lying on national television. But then, slowly, we realise there’s more to him.

There are moments when he can’t help but be human (especially in a few poignant scenes with a sex worker and in the interactions with his daughter and Radha – the former tells him what he can be; the latter reminds him what he used to be). There are scenes that underscore the real cost of being a man like him (“money makes people coward”). There are scenes that play with the audiences’ perceptions of his character.

Here’s what my notes read about him: “Episode 01 – Dipankar is way too ‘villainous’. E04 – Is Dipankar Evil? Not really.”

A large part of the show hinges on whether Dipankar will change his ways, and I had no idea right till the last episode.

But something else is also going on in The Broken News: that, much like the world it depicts, the show finds a way, time and again, to be schizoid itself. It starts from the lead performances. If Ahlawat is memorable, then Bendre is forgettable, struggling to get even the basic diction right. If the series respects its audiences in several crucial scenes, then it also resorts to some banal spoon-feeding tropes (such as repeating dialogues – showing a character remembering them – when they were said only a few scenes ago). If it respects the rigours of journalism, then it also has a scene where Radha walks into a hospital, quite unprepared, and breaks a major investigative story in one night. These are not sporadic flaws but a pattern that recurs throughout the series.

Some things are plain absurd, trying to manufacture conflict. Radha, a fierce and uncompromising journalist, doesn’t think twice before making a Josh 24×7 employee her flatmate. (The guy steals her story.) Dipankar grilling the home minister on camera is similarly out of character. At one point, Radha wants to expose Dipankar, but changes her mind – without a convincing reason – and then goes to the extent of wanting to collaborate with him (even when she has all the reporting materials). The chances are high that for every highpoint of the show – say, attention to detail – you’ll find a scene (or more) that contradicts the very same thing.

This yin-yang filmmaking produces a disorienting and baffling effect, as if two separate sets of people made the show. Cinema doesn’t work like math, so 1–1 isn’t a zero here, but dips in the negative, making The Broken News, at best, middling. Maybe, just maybe, all of this has a weird meta circular logic to it: creators tainting their creations, journalists killing journalism.