‘Modern Times’ was not only Chaplin’s last silent film. It was also his Tramp’s swansong. 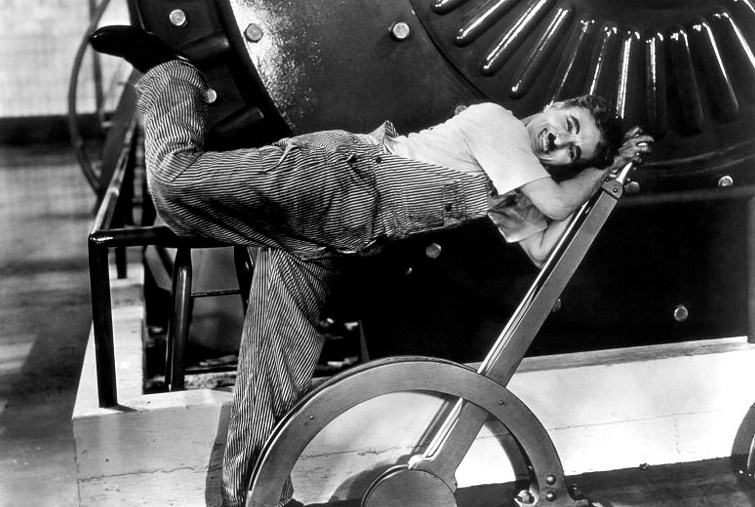 One reason why Charlie Chaplin went on an extensive tour of Europe and parts of the East during February 1931-June 1932 was to promote his just-released film City Lights.

But the real motivation lay elsewhere: he knew he stood at a cross-roads, and he needed a break from familiar surroundings to decide which way he wanted to go. ‘Talking’ films, or films synchronised with recorded sound, more particularly with verbalised dialogue, had made their appearance by the late 1920s. For years after that, with audiences being rapidly weaned away from silent movies, filmmakers like Chaplin who had not merely cut their teeth on silent films but had evolved their own unique idiom in that genre, were faced with a tough choice: to switch to ‘talkies’ or  risk carrying on as though nothing much had changed.

The great D.W. Griffith soon embraced the new avatar; after a brief experiment with the part-talkie in Lady of the Pavements (1929), his Abraham Lincoln (1930) and The Struggle (1931) were full-sound films. A few other major directors, most notably F.W. Murnau, Aleksander Dovzhenko and Yasujiro Ozu, held out for a while, of course, and Orson Welles produced his Too Much Johnson as late as in 1938 – but the signs were clearly not propitious for the kind of film that had been the norm till before The Jazz Singer  – the first fully ‘talking’ film – hit the theatres in 1927.

And Chaplin’s resistance to the talkies was much more than a natural reluctance to shed settled habits. Each of his silent films was held together by two principal elements – the versatility of his Tramp and the eloquence of his pantomime. Together, these two ingredients helped Chaplin transcend the boundaries of the spoken word. Wasn’t it only human of Chaplin, then, to worry that, once his Tramp was tied down to the conventions and traditions of the English language, the universality of his appeal would diminish significantly?

Could any set of words, however skilfully marshalled, adequately convey what an eyebrow arched in exasperation, a shoulder drooping with weariness or a face lighting up with childlike pleasure managed to suggest wordlessly? When he was shooting for City Lights, Chaplin convinced himself that the sound film was an aberration, or a passing fancy at best, and the ‘pure’, silent movie would reclaim its ground once again.

City Lights was, of course, a triumph, and audiences all over the world loved it like they had seldom loved a movie. But his travels around Europe’s major cities now told Chaplin that the ‘talkie’ had come to stay. Indeed, hadn’t he himself, in City Lights, been obliged to make allowance for sound-synchronisation by adding a soundtrack that included both sound effects and a full musical score? As Chaplin cast about for a way forward, he felt restless, and even the change of scene did little to allay his disquiet.

Modern Times (1936) was born out of these anxieties: that it gestated for a full five years gives the measure of Chaplin’s unease over its making. In the event, it made extensive use of the soundtrack which, this time, encompassed not only synchronised recorded music and sundry background sounds but also some variants of ‘dialogue’: not, admittedly, in the form of direct conversation or speech, but by way variously of a pre-recorded sales pitch (by a man hard-selling a ‘feeding machine’) and the factory-owner’s television-mediated harangues to his workmen. 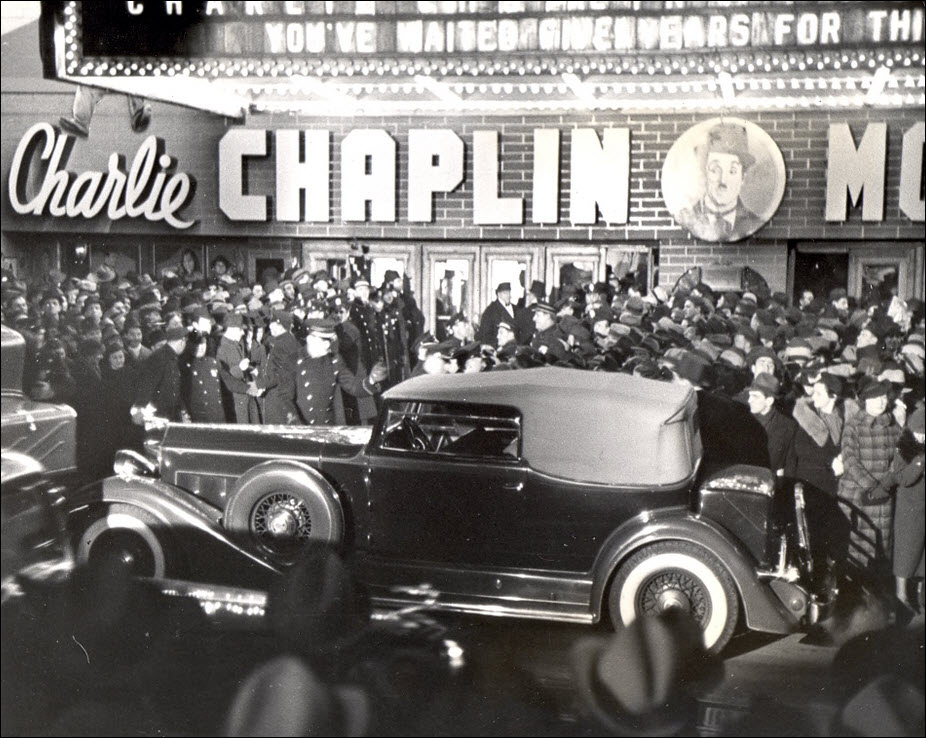 A photo of the movie premiere of ‘Modern Times’. Photo: Public domain

The most memorable use of verbalised communication does, of course, come at very nearly the film’s end – via a ‘song’ that the Tramp-turned-cafe-singer dishes out for the benefit of the cafe’s (and the film’s) patrons. More about that song later, but let us note here that Modern Times became the bridge Chaplin negotiated to cross over to his own world of ‘talking’ films. On the way, he had also rehearsed – and even actually filmed – a segment of Modern Times with dialogues, but later decided to jettison the speaking episodes, retaining instead the by then common device of intertitles, or printed title cards inserted between shot frames.

But if his travels did not persuade Chaplin to make an immediate crossover to talkies, they still helped widen his intellectual horizons considerably. While still in the US, he had witnessed with horror the toxic fallout from the Great Depression, and the spiralling crisis in most European countries strengthened his belief that industrialised societies were pursuing a seriously flawed development model.

Machines had come, Chaplin recognised, to so completely dominate that model that, far from being a facilitator to societal well-being and happiness, they had transmuted into instruments of torment for the hapless working-man, even as they helped swell the machine-owner’s profits. (Years later, his Barber-Hynkel in The Great Dictator was to movingly remind the world that “More than machines, we need humanity”.) And the State merely aided in maintaining the status quo, reducing even important welfare projects to a wholly unimaginative, bureaucratic fire drill.

With seemingly inexhaustible energy, Chaplin met important public personalities – politicians, labour leaders, scientists, artists and other intellectuals – engaging them in discussions, sometimes in debates. His enthusiasm was so extraordinary that he even managed to meet M.K. Gandhi in London – though Gandhi was not even aware of Chaplin the man, still less of his art – and had a long, lively chat with him about human labour and personal freedoms. In Weimar Germany, he gained insights into the dystopia the Nazis were pushing the country into, and the experience affected him profoundly.

Also read: We Should Be Grateful Charlie Chaplin Made ‘The Great Dictator’ When He Did

At one of  history’s great turning points, one of the greatest living performing artists was avidly absorbing new impressions and new understandings, later to release them, fertilised by his rich imagination, into the magic world of his art as compelling visual and emotive experiences. As a result, Modern Times and the films that came after it begin to site social realities squarely in the middle of the narratives. Surely Chaplin’s craft was always committed to the human condition. His empathy with lives lived on society’s margins is hard to miss even in his early films. Their episodes of knockabout foolery are often shot through with great compassion and tenderness; in them even rollicking farce deftly wends its way through pain and loss. But now a fresh leaven of understanding seemed to have been added to his sympathies, making them subtler, keener, more catholic.

Modern Times tugs at our heart-strings even as it impels us to ponder the price and the limits of progress. The zeitgeist of the 1930s permeates the film more fully than it perhaps has done with any other single work of art. 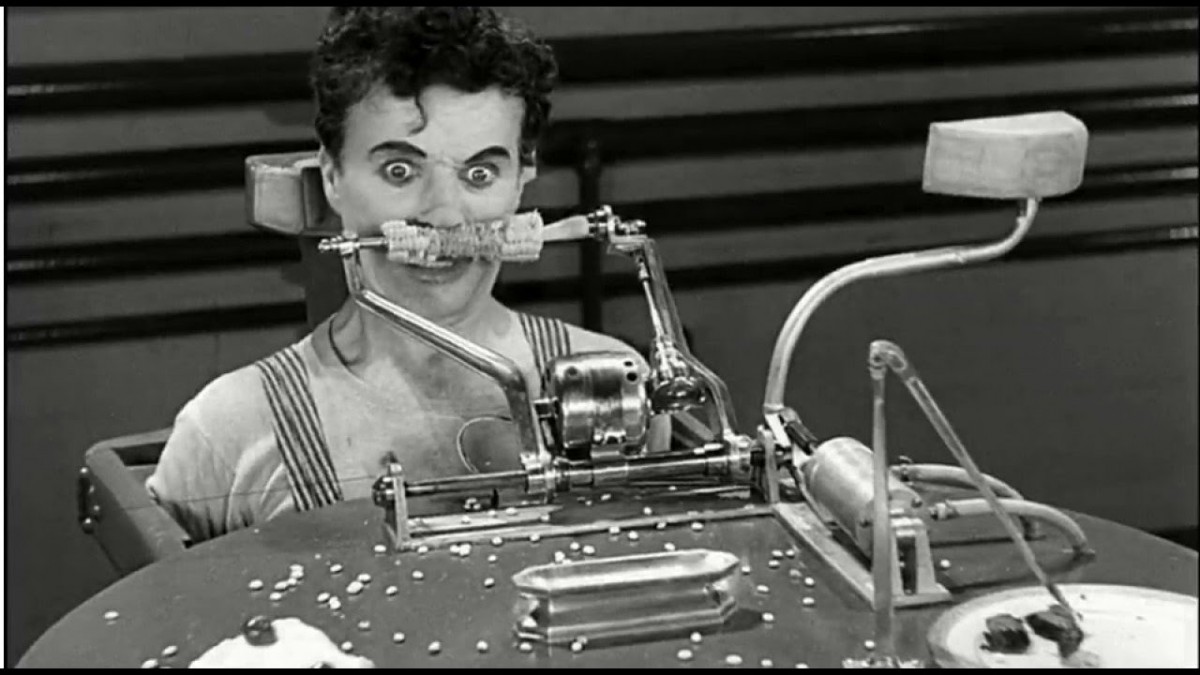 This is not to suggest that Modern Times is short on comic ‘business’. Indeed, it makes you laugh all through, but what is really remarkable is the surprisingly many levels at which the film engages with your sense of humour here. There is the familiar level of uproariously funny comic gigs like the rumbling stomach and the failed jailbreak. Then there are episodes of inspired nonsense with the Tramp fumbling with giant machines or trying to feed his irate boss even as that moustachioed gent lies hopelessly trapped inside one of those machines.

The scene with the Tramp and the gamine gambolling and enjoying themselves inside the supermarket, the Tramp teetering dangerously on the edge of an unprotected balcony as he spins around on his roller skates, is both hilarious and heart-breaking: the viewer senses that the Tramp’s spot of good luck must run out soon. At another level, there are episodes which are very funny in themselves, but even as you double up with laughter watching them, you are aware of new elements creeping into the comic world which are vaguely disquieting, at times even somewhat sinister.

The bizarre feeding machine is sure to trigger riotous laughter, but doesn’t the look of terror in the Tramp’s eyes, as he sits strapped to the infernal contraption, also remind us how regimentation and the suppression of choice are endemic in many societies today, and how both the State and transnational corporations are intent on their project of homogenisation everywhere? 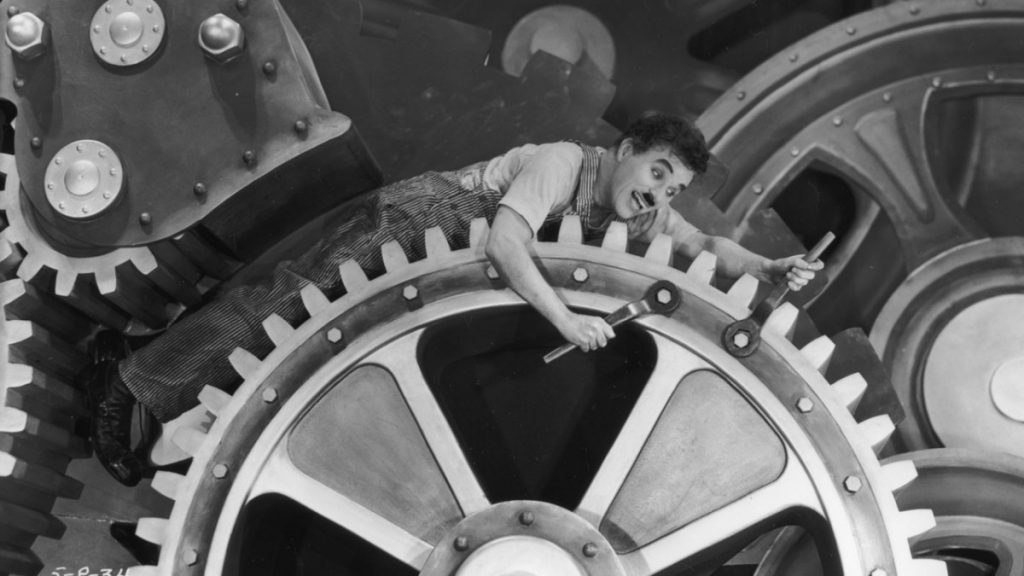 Relentless pressures of the factory-floor routine unhinge the Tramp, who then proceeds to behave  preposterously, but his insanity is for real, even if he is eventually cured of it. That his work pushes him over the edge into the arms of a mental institution is surely scary. And the manner in which he scampers about, a monkey-wrench in hand, fixated on anything that looks remotely like a bolt or screw which it is his business to tighten, is funny only until he runs into a lady secretary. When he chases her around so that he can ‘fix’ the buttons on her dress, the scene acquires a touch of the macabre.

It is idle to speculate, as some critics have chosen to do, if early Marx with his theory of alienation was Chaplin’s inspiration in these factory scenes. In all likelihood, it was his artist’s instinct which helped visualize  the primary images, which then the master innovator in him chiselled into unforgettable shapes. Any familiarity with Marx’s text could possibly have only sharpened the images, not created them in the first place.

The song sequence is among the most memorable exhibits in Chaplin’s picture gallery, on a par in the inventiveness of conceptualisation and mastery in execution with the Thanksgiving Day dinner in Gold Rush. It is endlessly funny, of course, but also supremely self-assured in the manner it plays out. Surprises pile on throughout the sequence, and an unbelievably precise use of cutting and of the camera makes sure that viewer interest does not flag through this longish episode involving a large number of actors placed at varying depths of focus. The song itself is virtuoso Chaplin. It is as much mock-Italian as it is mock-Spanish or mock-Portuguese or mock-Russian, delivered with perfect fluency and in dead earnest, and the vivid gesticulations accompanying the song enhance the viewer’s/listener’s pleasure immeasurably.

It is difficult to see any actor other than Chaplin pulling it off . Extraordinary that this gibberish was his first spoken ‘words’ in a movie. Was Chaplin letting us in here on how he really felt about sound in films? We will never know for sure, but it is a plausible hypothesis. 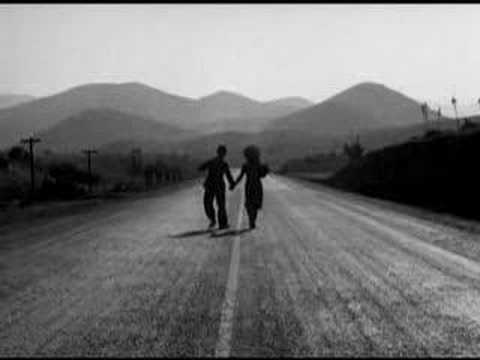 Modern Times marked the end of the Tramp’s journey. Chaplin now knew he had to adapt his art to the talkie, though it is possible that his ambivalence to the new medium never went away completely. But he could not conceive of a representation of the Tramp except as a mime, and one supposes it was a heavy-hearted adieu that Chaplin bade his alter ego.

As the movie’s final sequence pans out, the Tramp, linking arms with his lady love, first begins to walk towards the camera, the viewers. After advancing for a few short steps, however, they turn around, and begin their long walk away from us, towards where a low line of hills beckons in the distance. A new day is breaking, and the Tramp has just flashed a defiant intertitle (reading ‘Buck up – never say die! We’ll get along.”) to cheer up his companion. But we know we have seen the last of him.

Anjan Basu can be reached at basuanjan52@gmail.com