Selling a Dream: The Story of Cinema as Told Through Poster Art

As a film was planned, made, released and distributed, hand-painted posters also lived simultaneous lives of their own. 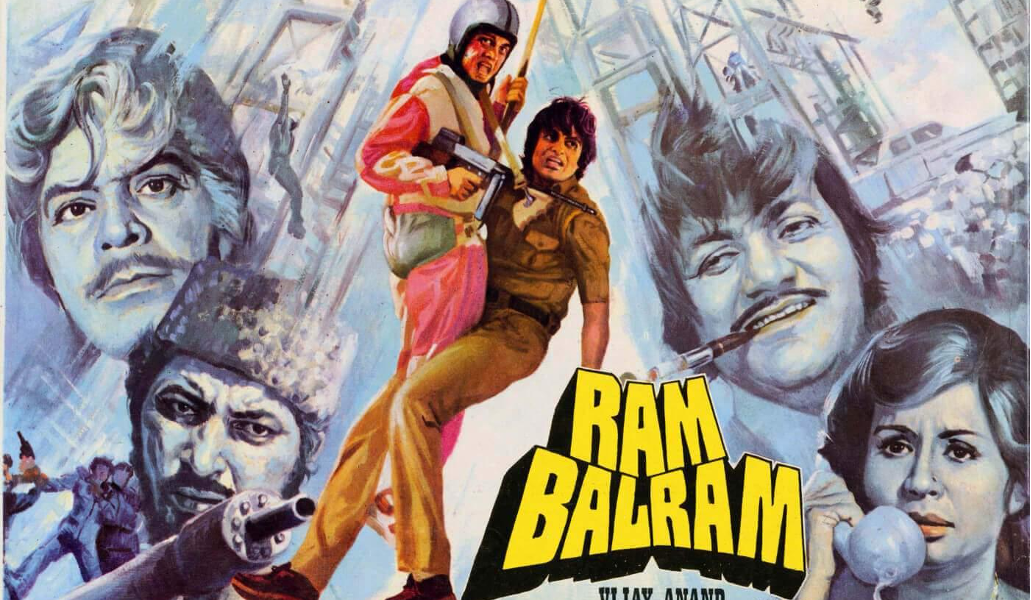 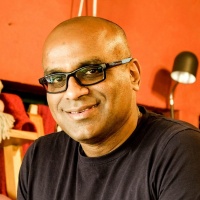 This is the sixth article in a series on the history of the Indian film industry. Also read: Part I | Part II | Part III | Part IV | Part V

“Standing at the railway station, watching my face on a movie poster for the first time, with a few people staring at it with pleasant curiosity was a thrilling experience. I looked at Guru Dutt – he smiled and simply said, ‘Good.’

∼ Excerpt from Romancing with Life by Dev Anand

I have been among the “few people” who have paused in the middle of a busy day and looked up at cinema hoardings, at railway stations, at betel-stained telephone booths near bus stops, at a neat crevice beside a neighbourhood kirana store, at prominent junctions where they look down handsomely on traffic, at run-down theatre houses and corners of quiet lanes. The iconography of cinema flows in the veins of the daily hubbub of Indian life through poster art, providing a stark contrast, a moment for thought and often times a wall to urinate upon. In a country where there is one cinema per nine million human souls, not everyone gets to go to the cinemas, but a billion souls live among these mute images holding the promise of stories, untold, unseen. 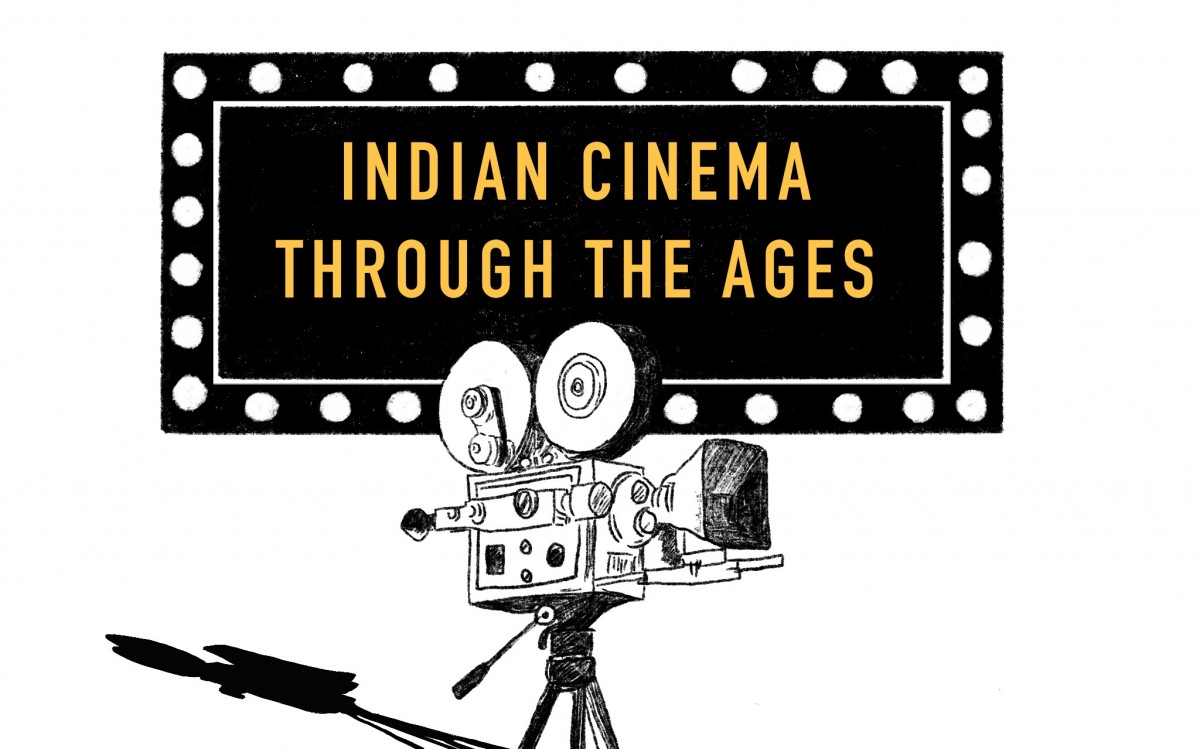 The 1940s were an interesting time for art and publishing. By the turn of the century, Raja Ravi Varma had given a universal image to Hindu gods and goddesses. These pictures were bought by city dwellers and established within household shrines. Calendar art was coming of age. The Parsi theatre scene originated a form of publicity that involved the distribution of sketched images indicating plot set pieces, which were then distributed through announcements on bullock carts. The bullock carts were eventually replaced by motor vehicles, and I remember running behind them to gather pamphlets for the Jatra in rural West Bengal, right up until the 1980s.

The commercial advertising scene was in its infancy, with billboards starting to make an appearance in the increasingly congested urban landscape. Illustrated magazines like Chandamama and Dharamyug were seen beside nubile covers of James Headly Chase on Arthur Henry Wheeler pushcarts across railway stations in the country. It was a busy time for painters and sketch artists already when the business of selling movies came their way.

The term “quota publicity” is another one of those lazy phrases within the film industry that has become part of its lexicon over the years. It literally means the quota of publicity that the producer would pay for – and the distributor and the exhibitor would do everything over this bare minimum. Planning for a film poster would begin very early, because a producer starts selling a film with a germ of an idea. The scripts would go on to live a hundred lives during the making of the film, but a grandiose announcement in the trade magazine is a must.

In the run-up to the release, still shots of the main characters would be taken and then handed over to artists on the payroll, or freelancers. The freelancers would expand the photo images using grids to capture the proportion and size to build collages of the key characters with text in exotic fonts featuring at the bottom, including credits to the producer, music director, director and, with some reluctance, the script writer. 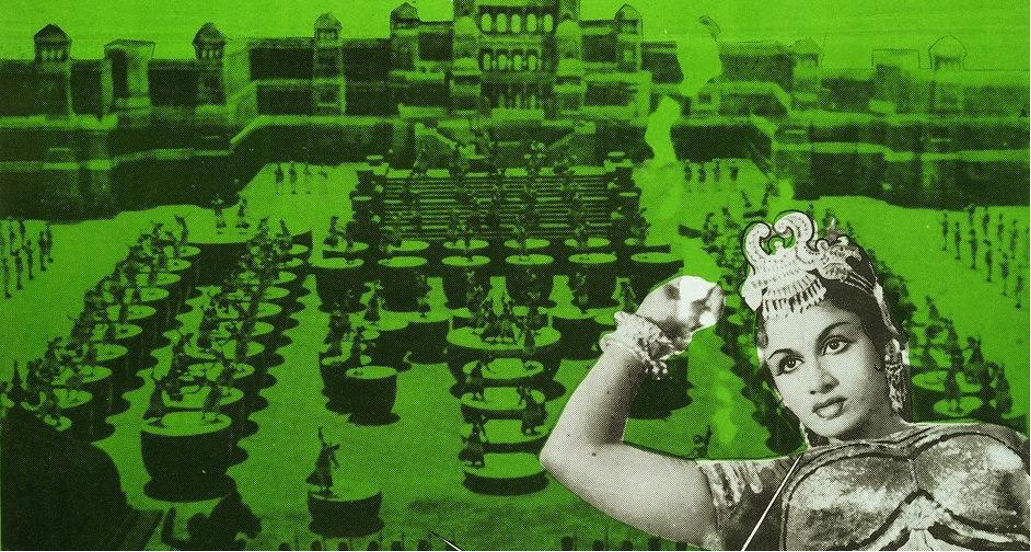 S.S. Vasan’s ‘Chandralekha’ (1948) redefined the rules of film publicity. At a time when the publicity budget was a mere Rs 25,000 rupees per film, a record Rs 6 lacs were spent on posters and cut-outs for this bilingual movie (Hindi/Tamil).

Maqbool Fida Hussain’s earliest memories as a professional painter after graduating from the prestigious Sir JJ School of Art were of working furiously on a 40-feet cutout of Durga Khote with the streets of Bombay being his workshop and muse. The cutout had to be ready, and this very public workshop that he had encroached upon had to be wrapped up by 4 am when the first trams rumbled through.

Later in life, he talked about how his mind’s eye envisioned the cutout looking down into the multitude, while his hand captured the vision through strokes of his brush. Indeed, Hussain eschewed the grid format used by poster painters and went by the artist’s instinct for proportion and aesthetic. This very public canvas was wrapped up eventually five minutes before that heralding tram rode up. The poster was put up in time for the release. It would have been another one of his masterpieces, but its fate and that of the film concerned is unknown. Hussain of course went on to bigger things, bigger studios, pay cheques and controversies, but that canvas, that urgency of the brush over it, that chaos in parts but harmony in eventual realisation could have come from these early days. 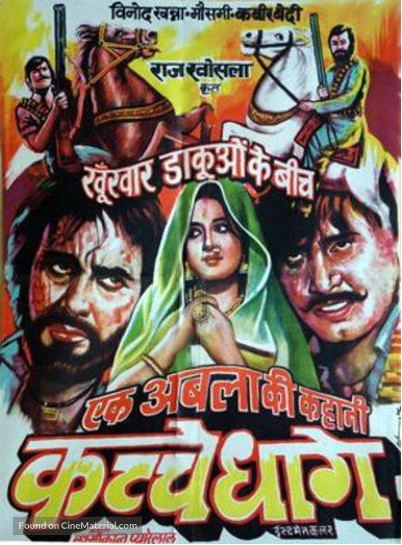 A north Indian painted adaptation of the poster for ‘Kacche Dhage’ (1973). Dacoit films were a major draw and north Indian adaptations of posters for B and C circuits featured more guns, gore and horses.

The film poster reflected a certain earthy philistinism because it eschewed art for appreciation’s sake and appealed to the raw emotions of the man on the street. Green, red and pink faces, thunder thighs, outsized bosom, guns with crooked barrels, swarthy expressions that outdo the wooden exertions of the real protagonist, some red, some yellow, lots of blood, gore and villainy, tens of faces peering out of a single sheet with different expressions. It was eyeballs and curiosity that these posters hoped to harvest to generate footfalls into the theatre. 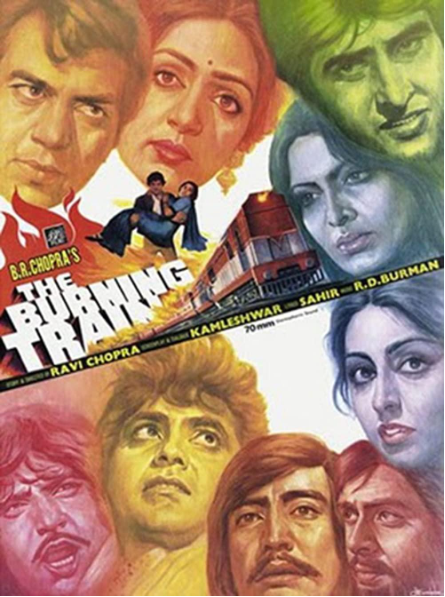 Poster for ‘The Burning Train’ 1980. Art by Diwakar Karkare. Nine different faces in nine different shades and a train running through them.

Ironically, it is this loudness and crassness that makes the art of the poster one of the ethnographic wonders of suburban Indian landscape. It is diverse, layered and has new stories to tell at every stage of its existence. First off, is the producer’s story as originally or not so originally conceived as “quota publicity” through film booklets, featuring songs, snapshots of scenes – comic book-like, six single sheet posters and one 16 sheet blow-up, hand painted showcards, lobby cards, stills for cinema slides and press advertisements. Then comes the big-ticket preparations by the distributors and exhibitors for the Friday release. Exhibitors had artists working out of their backyards who dutifully hand painted posters to fit the facade of their theatres, the size of which could extend up to 24 sheets. For big releases, theatres were elaborately decorated for the launch with large cutouts featuring the prominent stars peering down into the bustling traffic, surveying the metropolis and its denizens, miles out. 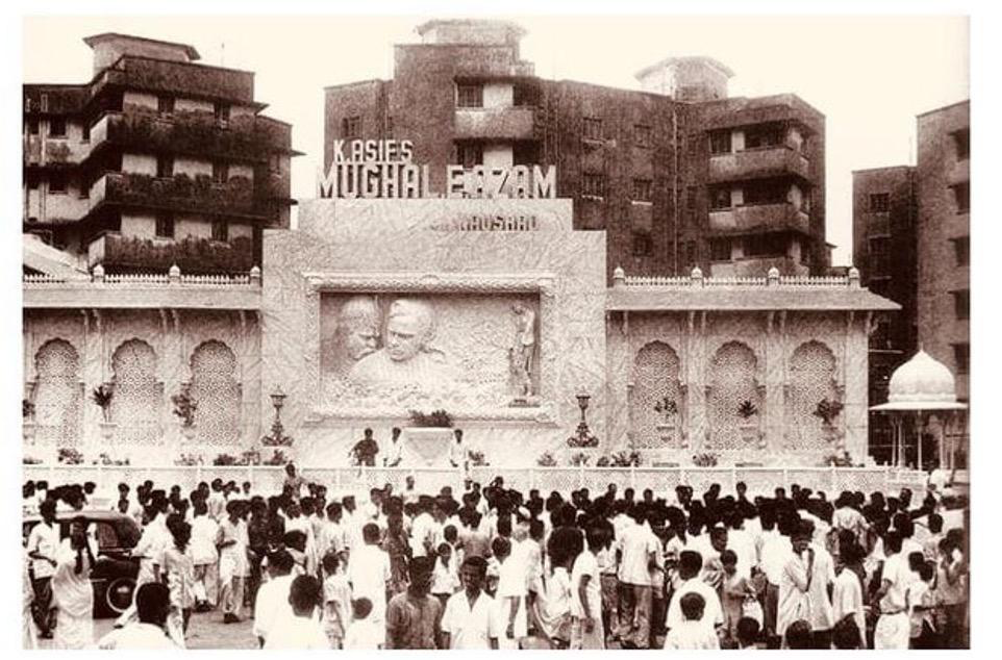 The premiere of ‘Mughal-e-Azam’ at Maratha Mandir on August 5, 1960. A fort-like display was erected over the theatre. Credit: Screen library

Reinforced with strong and vegetable base colours to withstand the elements – heat, rain and dust – splattered with zinc oxide to increase their longevity, the faces on these posters could live on to immortality or be dismantled or consigned to the dustbin of irrelevance depending on how successful the films they advertised were. The exhibitors kept an eagle eye on every reaction during the initial weeks of screening – have the audiences clapped, thrown money at the screens, whistled, or have they gone to the toilets during the song? These reactions would inspire the next iterations on the poster. Perhaps the “item” routine should be worth a solo poster for the next week? Maybe highlight the much-feared villain who has reduced the turnover of samosas during the interval? Or maybe the film is already flagging and deserves a last boost through the announcement of a final week of showing?

The mutation of the cinema poster continues with the film’s traversal from A to B and C territories – a class system of sorts in the commercial value chain. As the film traversed the dust bowls and river plains – Hardwar, Allahabad, Monghyr, Bhola, Danapur, Malda, Silchar – it provided sustenance and employment to a hundred other artists of varying skill and capability. These artists interpret the story using their own strokes for their local audiences. In Bihar, UP and Punjab, more guns, gore and flesh are thrown into the mix. Local stars like Shatrughan Sinha, Dharmendra and Mithun Chakravarthy are featured prominently on the posters. The remaining prints of these films are used to squeeze out the last bit of commercial potential that it can furnish, before the graveyard shift begins.

The graveyard shift is a resurrection of sorts. Within the lanes and bylanes of every metropolis, far from the glitz of the shiny buildings, malls and shopping arcades, run cavern like cinema halls that are frequented by daily labourers, who sit on wooden rat-infested slats. These theatres, that once ran premieres and hosted the glitterati, have been shorn of their trinkets and now stink of human release and frustrations.

These movies have human beings with fangs, and scantily clad apparitions. The screen ticks away telling stories of another time, another stage, another sensibility, as the darkness envelopes the misery of this audience in a debased thrall of entertainment that their limited means can buy. 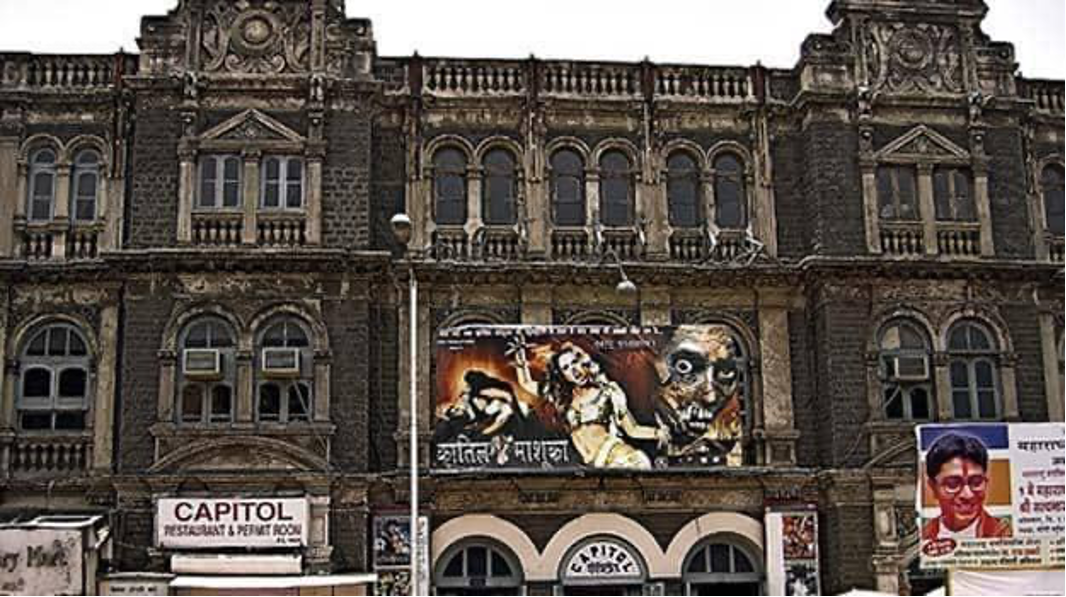 Capitol Cinema established in 1879 showing ‘Katil Mashooka’ sometime before it shut its doors permanently in 2009.

The story of the poster is not as dark as this last chapter, though. It has its shining moments, of pause, of pure genius and mastery. Names like Diwakar Karkare who gave us the knife painted searing visage of the angry young man. The early genius of Bimal Roy’s Naukri which broke the trend of illustrative posters by edging into surrealism. Satyajit Ray’s posters are a collector’s item today and so are the hand painted posters of Mughal-e-Azam. There are names like D.R. Bhosle, Ram Kumar Sharma, B. Vishwanath, Gopal Kamble, Shankar Mulgaonkar and many others whose signatures can still be seen tucked into corners on reproductions sold to foreign tourists in Chor Bazar and eBay. They have given us images that will live with us for a lifetime. 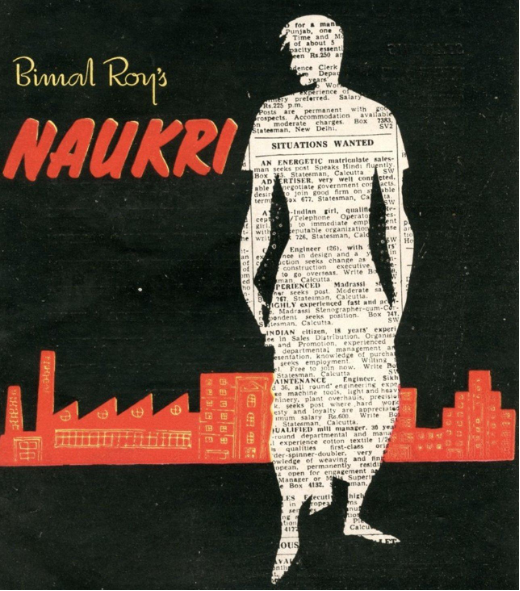 The film poster, therefore, has a life beyond its inglorious resurrection. It serves as the exotic from the orient in villas, chateaus and restaurants catering to the well-heeled. A hand-painted image has a certain rustic charm that digital frames with their polish and preciseness just do not provide. Perhaps it is the lives that the poster has traversed that makes it so valuable? Maybe the stories that simmer at its edges never die even though the colours often fade out. 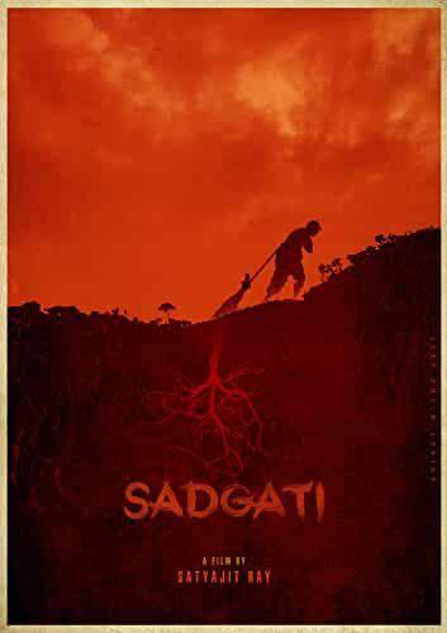 Poster for the 1981 television film ‘Sadgati’ (‘Deliverance) by Satyajit Ray. Using an image to tell a story.

The image that inspired Dev Anand continues to enthral, long after the launch of flex posters and digital innovations that characterise the launch of a movie today. And yes, there is always the YouTube trailer launch to serve as “quota publicity”.