Sabiha Khanum, the First Lady of Pakistani Cinema, Passes Away 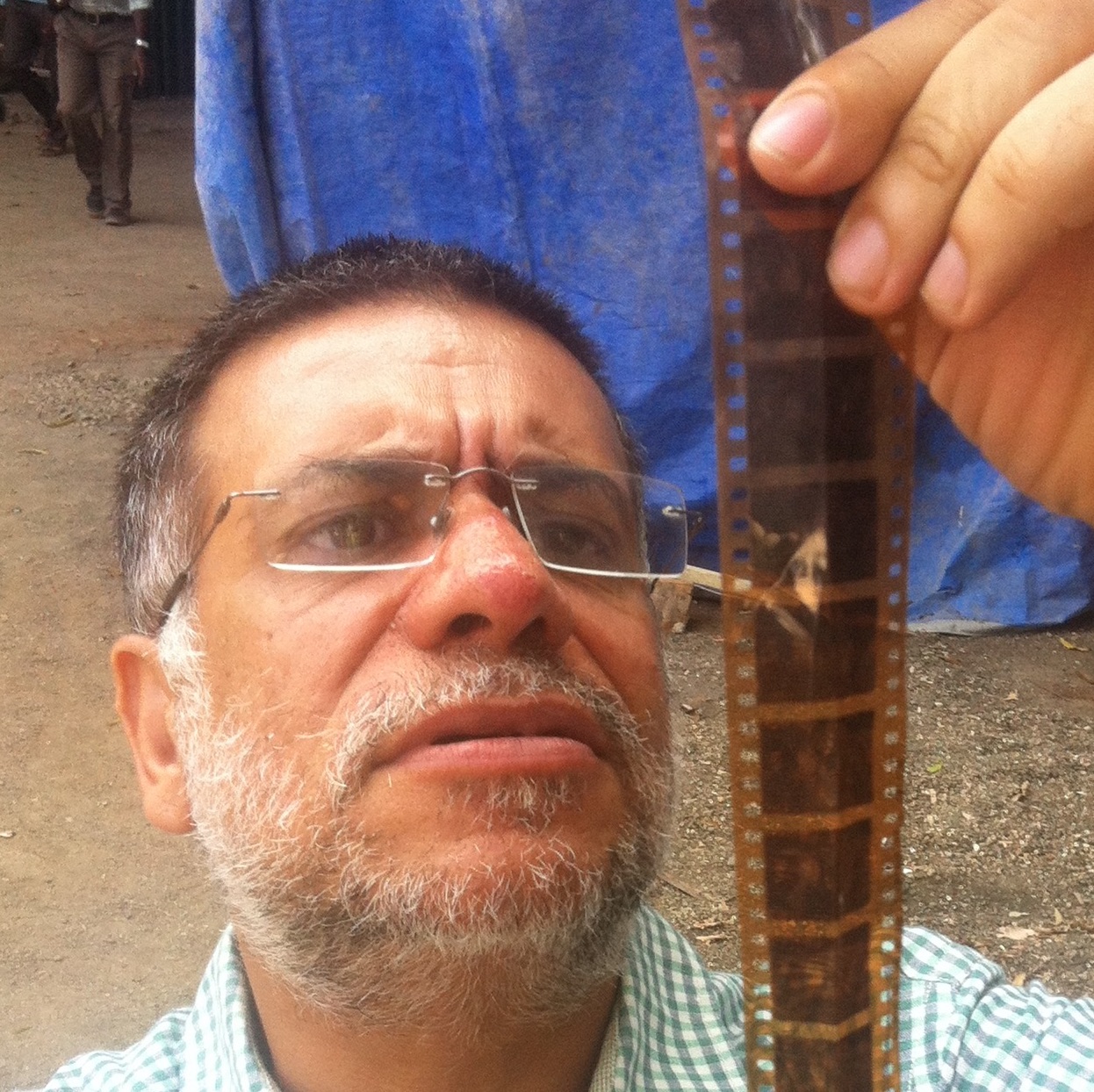 Sabiha Khanum, acknowledged as the ‘First Lady of Pakistani Cimena’ and arguably the greatest actress of the Pakistani screen, passed away in the US on Saturday. Her exact year of birth is not known – it is variously mentioned as 1935 or 1936.

Sabiha was born Mukhtar Begum in a village near Gujrat in Punjab. Her mother died when Sabiha was just six. Her father, based in Lahore, then sent her back to the village, where Sabiha was brought up by her grandparents. She learned to milk cows, get water from the well, make rotis and churn butter.

After she grew up, her father took her back to the city. A friend of his took her around to see Lahore and for the first time in her life, Sabiha watched a movie on the big screen. Soon after, Sabiha visited Radio Pakistan, where her father’s friend worked, and in the spur of the moment, she was given the chance to sing in a live programme. A few days later, she saw a play in the theatre, and found out they were auditioning. Sabiha tried for that part and got it.

A film role followed. Her first film was Beli (1950), also marking the Pakistani debut of Santosh Kumar who would go on to become Pakistani cinema’s greatest and most popular leading man. The film, with the Partition of India as backdrop, did not do well at the box office.

The same year, her next film Do Aansoo made her Sabiha a star. It was the first ever Urdu film in Pakistan to mark its silver jubilee (running in a theatre for 25 consecutive weeks). The film, directed by Anwar Kamal Pasha and co-starring Shamim, Gulshan Ara and Santosh Kumar, was based on an earlier Noor Jehan hit Bhaijan (1945) and looks at how a man inadvertently ruins the lives of his wife and daughter. In fact, such was the impact of the film that it was re-made twice subsequently in Pakistan, as Dillan Da Saude (1969) in Punjabi and Anjuman (1970) in Urdu. 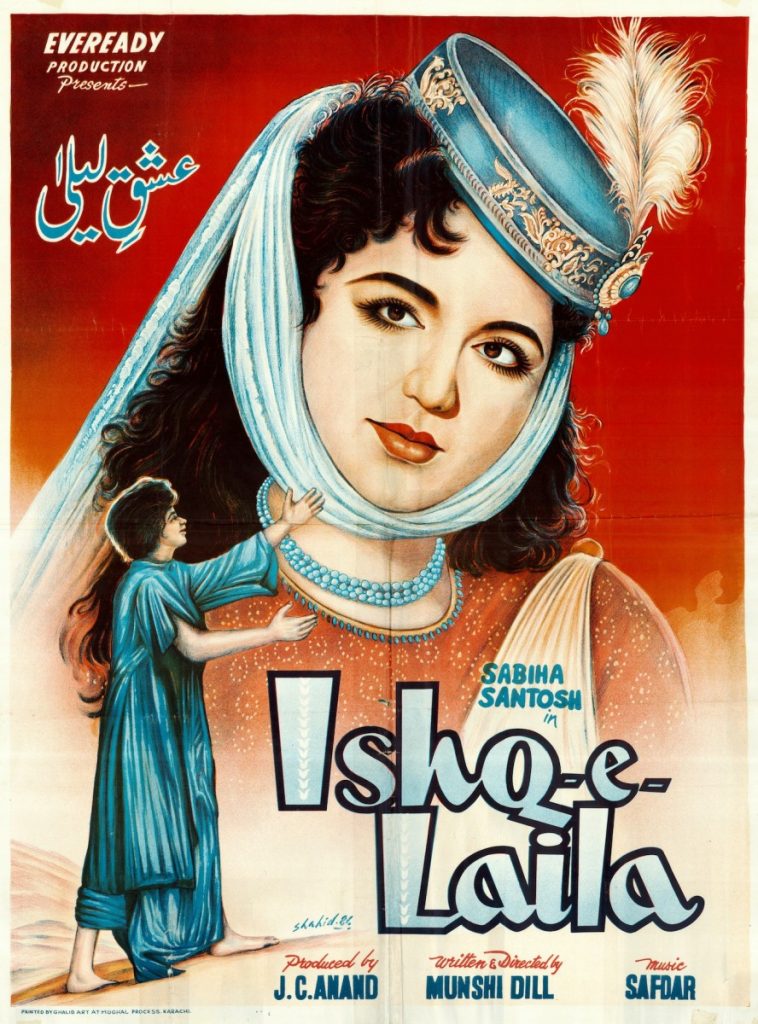 Now a popular leading lady, Sabiha gained attention as an actress of merit in Sassi (1954) based on the legend of Sassi and Punnu but even more so in Gumnam (1954) where she expertly played a woman with mental disabilities. For the latter film, Sabiha devised a shrill laugh for the character, which she used to practice at home. Once, upon on hearing her rehearse, a concerned neighbour was so worried that they came over to find out if all was well with her!

With Dulla Bhatti (1956), Sabiha proved she could carry a Punjabi film with ease too. The film, co-starring Sudhir, was a huge success at the box office. That year, Sabiha delivered success after success: Hameeda, a remake of the Geeta Bali starrer Vachan (1955), Sarfarosh and Chhoti Begum all proved to be huge winners at the box office. Sabiha had become the undisputed queen of Pakistani cinema.

Waadah (1957) and Saat Laakh (1957) are regarded as milestone films in Pakistan, both co-starring Sabiha and Santosh and both super hits. Wadaah looks at a poor, simple man from the village, who loves a police officer’s daughter from the city. The film is known best for Santosh’s sensitive performance as well as the song Jab Tere Shaher Se Guzarta Hoon. 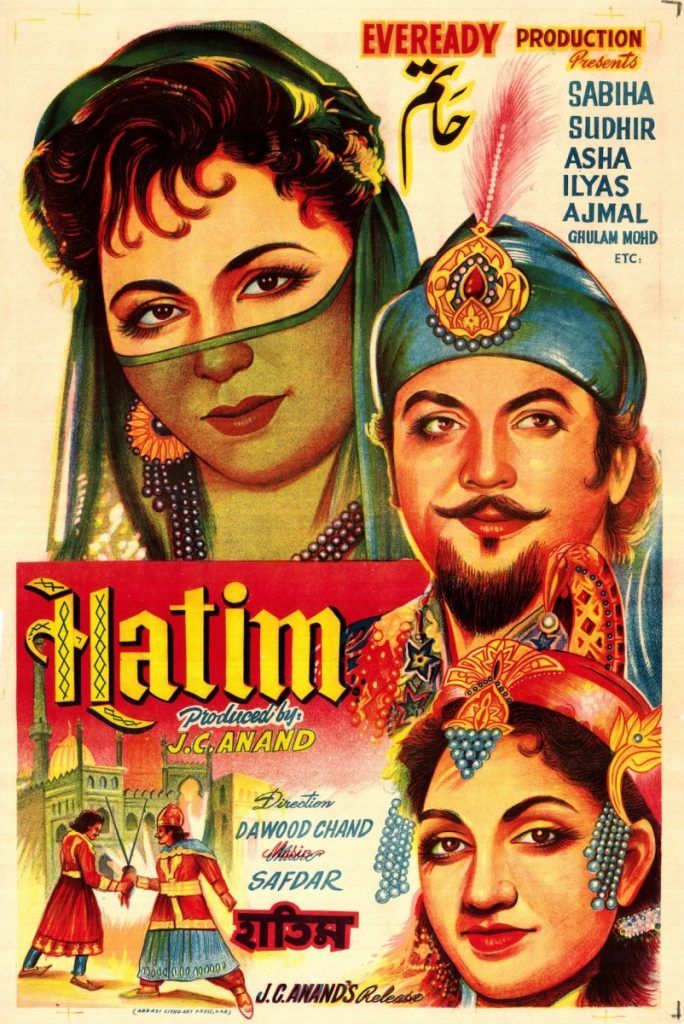 Saat Laakh takes off from Guru Dutt’s Mr and Mrs 55  and is about a heiress who, as per a condition in a will, has to marry in order to retain her wealth–Rs 7 lakh in cash, a bungalow worth Rs 7 lakh and other assets also worth seven lakhs. She marries  a convict on the run with a plan to take him to her hill station home on a ‘honeymoon’ and then have her lawyer bring the police there a couple of days later to have the man arrested. Naturally, she falls in love with him in these two days; the police come and arrest him and he thinks she has betrayed him and his love.

Turns out he was on the run as he was wanted for murder, having ‘accidentally’ killed a man, who was trying to rape a woman (Nayyar Sultana). Expectedly, all ends well.

In 1957, the Nigar Awards, Pakistan’s version of the Filmfare Awards, were launched. Santosh won the Best Actor Award for Waadah and Sabiha was the winner for Saat Laakh. By now, the Sahiba Khanum-Santosh Kumar pair was talked of in the same manner as Raj Kapoor and Nargis in India. It was but inevitable that with the numerous films they were doing together and with the on-screen chemistry they shared, that they fell in love with each other off-screen as well. This in spite of Santosh being a married man with children. The two, after initial opposition from Sabiha’s father, got married during the making of Hasrat (1958).

In an interview given to The Saturday Post, Saibiha said:

“My father was of course completely against the marriage. He couldn’t reconcile to me becoming Santosh’s second wife, while he was still married to his first wife and also had two daughters. But I told my father that Santosh was a true gentleman and there was nobody I’d rather marry. Finally, my father relented. And I’ve never for a day regretted that decision. In fact, Santosh’s first wife and I are very good friends. She is a really nice woman. In fact, the reason that we could make it work was that we both loved Santosh very much and we got along so he would never face a conflict. It’s worked out so well that our children don’t consider each other half-brothers or half-sisters. It’s all a tightly knit family, Masha Allah!”

Sabiha proved to be a top star right through to the mid-60s, scoring heavily in films like Naaji (1959), Ayaz (1960), Shyam Dhale (1960), Mousiqar (1962), Shikwa (1963) – winning the Nigar Award for Best Actress, Kaneez (1965), Sawaal (1966) and Devar Bhabhi, yet another award-winning performance. Though by now Sabiha was getting slotted into the character artist category, she was still getting roles around which the film’s story revolved. In Ek Gunah aur Sahi, based partly on a Manto story, she was sensational as ‘Mummy’, an elderly Christian lady with a heart-of-gold. Though Rani, who played a double role as a mother and daughter, was the lead actor, it is Sabiha who keeps the viewer glued to the otherwise ridiculous goings-on on the screen. Campy, over the top and yet strong and fascinating, Sabiha effortlessly steals the film, which without her would have been simply unwatchable. She went on to win the Best Actress Award at Tashkent for her robust act as well as a special Nigar Award for her extraordinary performance.

Sabiha continued acting well into the 1980s receiving a special Nigar Award in 1981 for completing 30 years in the Pakistani film Industry. But Santosh’s death in 1982 shattered her. She reduced her workload gradually, moving away from the big screen and doing the odd television serial.

She then shifted to the US to live with her daughter and her grandchildren, where she passed away. Apart from her award in Tashkent and the various Nigar Awards she has won, she has also been honoured with the Pride of Performance Award, the highest Pakistani honour in entertainment, or the Tamgha-e-Imtiaz as it is known.

Karan Bali is a filmmaker based in Mumbai who is also the co-founder of Upperstall.com, a website on cinema of the sub-continent.