Despite its flaws, the movie – centred around two women – has managed to affect a small dent in the sky. 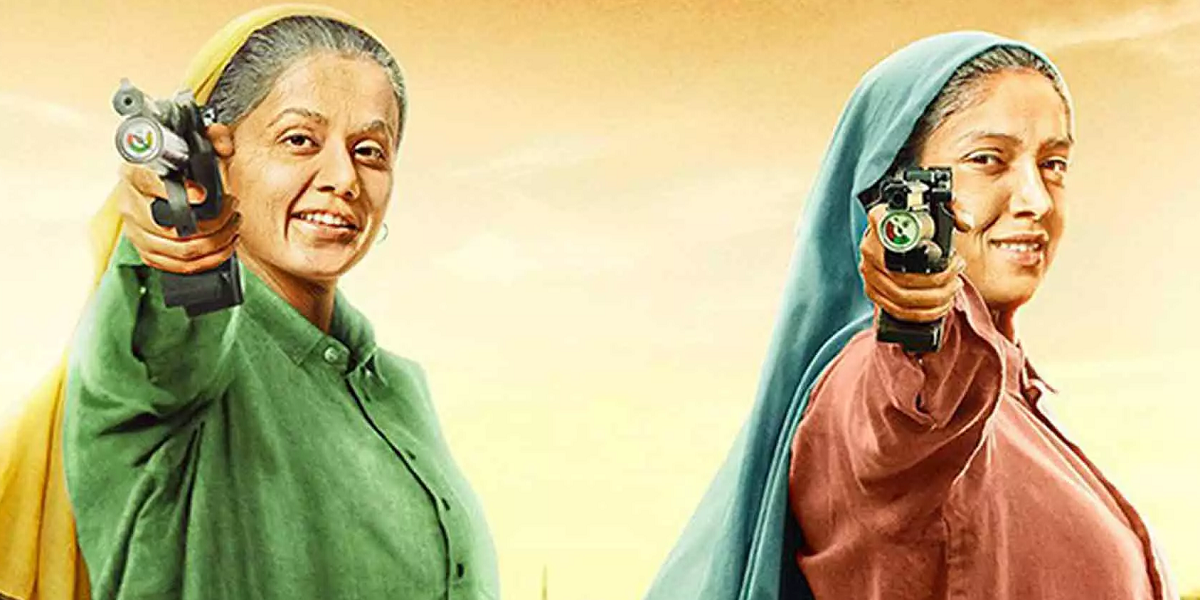 Mainstream Hindi cinema, conventionally comprising a hero and his heroics, hardly departs from its dominant storytelling mode. In such a hidebound industry, even small anomalies seem notable and, if done well, signal a new trail, highlighting the possibilities of subversion and reinvention. In terms of narrative novelties, Saand Ki Aankh, the closing film of the 21st Mumbai Film Festival (MAMI), which also gets a theatrical release on Friday, offers several new gateways.

Unlike most Bollywood dramas, this movie is centred on a heroine, not a hero; in fact, there are two of them — Prakashi (Taapsee Pannu) and Chandro (Bhumi Pednekar), sisters-in-law-cum-friends — who drive the story and resolve conflicts. Besides, contradicting another unwritten dictum, these women are not young and nubile, but ageing and angry, no longer in love with their husbands. Their fascination is stoked by handguns now, quickly realising that they can hit the bullseye – or “saand ki aankh” – with astonishing precision and consistent nonchalance. It’s the bulls at home, the men, that they need to be wary of.

Written by Balwinder Singh Janjua and directed by Tushar Hiranandani, Saand Ki Aankh unfolds in an Uttar Pradesh village, Johri, across four decades, from 1958 to the end of the millennium, charting their transformation from young brides to mothers to grandmothers – all such roles essayed with the obedience and dread of household slaves – to liberated, renowned sharpshooters.

Johri is a standard north Indian village, where the women serve — cooking, cleaning, producing babies, working in the fields — while the men expect to be served: idling on a charpai, smoking hookah, getting their legs messaged by their wives, who, entirely covered from head to toe, sit on the ground like discarded furniture. This is Hiranandani’s directorial debut, and in the past, he’s written screenplays for a slew of forgettable films (Masti (2004), Grand Masti (2013), Half Girlfriend (2017)), so the specificity and the level of detail, in Saand Ki Aankh, is both surprising and delightful.

At the start of the film, we find out that the young brides didn’t even get to choose their clothes. Their wardrobe had to be colour coordinated, so that their husbands didn’t get confused — Prakashi dressed in yellow, Chandro blue. That restriction didn’t just impact their lives but also their aesthetics. So Chandro saw Mother India (1957), sitting under a tent with other villagers, through a blue veil. As their granddaughter, the narrator, helpfully informs us, Chandro, in essence, saw a “blue film”.

The scenes framing Prakashi and Chandro’s lunge for independence – such as lifting their veils and looking outside the window on a rare bus ride – materialise with understated poignancy, shining light on what so many of us, especially the men, take for granted. Saand Ki Aankh particularly excels while dealing with such minuteness, implying that it is not just the story of two individuals, but an entire village, state, the country itself.

As is the case with most oppressive families, the villain here doesn’t lurk in the world outside but lives with them, Prakashi and Chandro’s brother-in-law, Rattan Singh (Prakash Jha), who is also the village’s sarpanch. Rattan is misogynist with a capital-M, who exists to intimidate and deride other women. Hiranandani and Janjua reinforce that trait scene after scene; after a point, you feel like saying, “We get it. Once was enough.”

Men like Rattan of course exist, but the makers fail to imagine him in ways that both advance the story and depict a nuanced picture of vicious masculinity. This, in fact, is a pattern throughout the film. When Prakashi and Chandro compete for the veteran shooting competition, the men at the venue sneer and laugh at them. In a later competition, it’s a bunch of college kids. Ditto, in another scene, when they’re travelling by train. These portions, after a point, don’t tell us anything new; they burden and bloat the film, make parts of it redundant.

Besides, for a film tackling huge passage of time, the sense of character evolution, or any other change, is scarce. In 1985, for example, Prakashi and Chandro wonder about their oppressed status. A few minutes ago, they were in 1958, watching Mother India. What happened to them in all these years? Is this the first time that they’re contemplating challenging the patriarchal diktats? We’ve no idea.

But the best part about Saand Ki Aankh is that Hiranandani is able to maintain his focus – he knows that this story, above all, is about a family; he doesn’t devolve it to a by-the-numbers sports drama to service a genre or to exploit obvious pathos. Here too, he excels by keeping his ears to the ground, understanding the rhythms and music of a changing life. Some of the most charming moments in the film come when Prakashi and Chandro are reinventing themselves bit by bit: learning to understand English, to sign autographs, to wear sunglasses with the confidence of a frivolous teenager.

Pannu and Pednekar’s performances elevate the film too. Pednekar crackles with verve and a sense of purpose, while Pannu, who is relatively relaxed and funny, can explode like a powerhouse when the situation demands. Their casting though – women in their early 30s playing revitalised sexagenarians – does seem like a bit of stretch, especially because the make-up doesn’t justify their ages. With some strands of grey hair and a few ornamental wrinkles, Pannu’s and Pednekar’s faces don’t change as much – reminding you of the recently viral FaceApp – which eventually comes across as a cynical ploy to attract a greater audience.

That said, though, it has also been long that a film like this has come out of mainstream Bollywood. The MAMI audience, cheering and applauding, backed the film at every turn; you don’t associate such a response with a film where men are nearly inconsequential. Saand Ki Aankh, despite its flaws, has managed to affect a small dent in the sky; we’d need many other directors for it to tear open.