'The Discreet Charm of the Savarnas' takes aim at the liberal and progressive upper castes who speak out about anti-caste solidarity but are far less forthcoming about their privileges. 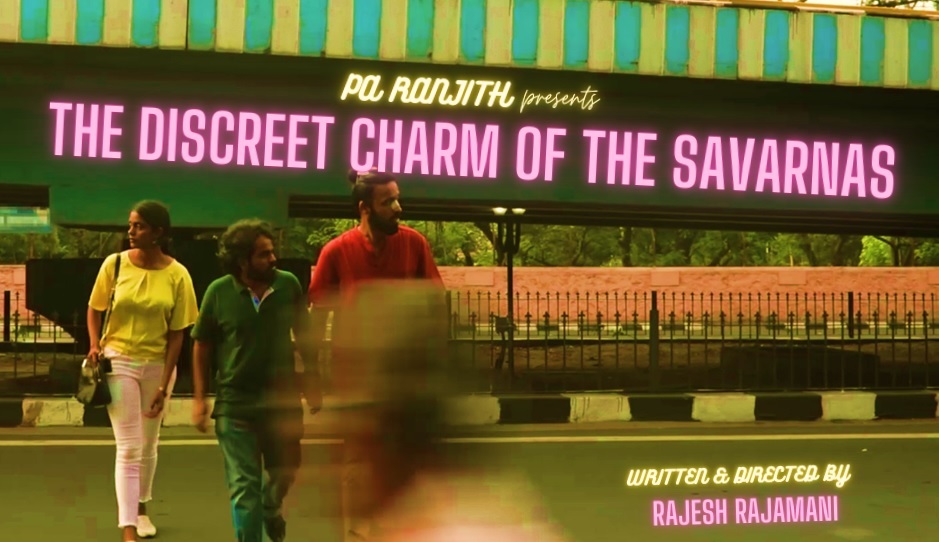 A poster for 'The Discreet Charm of the Savarnas'. Photo credit: Neelam Films 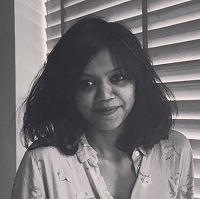 Rajesh Rajamani’s newly released short-film The Discreet Charm of the Savarnas, with its Luis Buñuel-touch to the title, takes aim at a specific sub-group of upper-castes and Brahmins – the liberals and progressives, who speak out about anti-caste solidarity but are far less forthcoming about their privileges or the consequences of their do-gooding.

Rajamani is both a film critic, primarily covering Tamil cinema, and a filmmaker. He has often written critically on how he believes the Savarna-gaze informs the stories that are told.

As a director and scriptwriter, even in his first short film, that was all of two minutes, he desisted from making his story about violence or oppression. Instead, in Lovers in the Afternoon, a young man makes amends with his irate partner by cooking her beef for lunch. This declaration that a meal of beef is a gesture of affection, that it means warmth, belonging and shared joy, quietly cautioned what was under threat if one didn’t vote wisely. Without referencing lynch-mobs or saffron terror in other parts of the country, it reclaimed beef on screen for its significance to Tamil culture. The film was produced by Pa. Ranjith and released days before Tamil Nadu went to polls during last year’s general elections.

In The Discreet Charm of the Savarnas, Rajamani falls back to satire, a form he is familiar with as the creator of the popular Facebook pages ‘Inedible India‘ (political jokes repurposing Ravi Varma and Kalighat paintings and Mughal miniatures) and ‘Fictional Subtitles‘. His resolve while writing the script, was simple he says; “deflecting the Savarna-gaze back at them.”

The protagonists, Dilip, Aruna and Swaminathan, a trio of independent filmmakers, look for a last-minute replacement to their nameless “Dalit character”. Shot entirely in English, the film lambasts the privileged, upper-class, urban liberal world they so clearly come from. They squabble about political correctness, quote Angela Davis with ease, decide on a whim that a female-led film may be just as good as a male-led one, but befuddled by her looks, tell a Dalit woman that she’s too beautiful for the role.

They keep up a cascade of similar absurd conversations; their panic mounts as the deadline approaches and they grudgingly settle on an actor. Their film gets made. It’s plainly on caste. It’s shown at Goethe Zentrum. Suffused in the post-screening debates by cultural elites, they accept the adulation for the “boldness” of their casting-choice without self-examination.

Rajamani tells me why he felt the need to ridicule this group of Savarnas in particular:

“There’s not much to achieve in mocking those who assert caste hierarchies through open violence. There’s nothing to satirise there. With progressive or liberal upper-castes and Brahmins, there’s a damage they do, that is far-reaching. A Brahmin who speaks out about caste oppression, becomes a super-Brahmin. They’re elevated above their casteist communities, because they are known for being Brahmin and outspoken.”

The consequences, according to him, are that “they take up cultural and academic spaces and claim their positions amplify the cause. They’re rewarded for their actions, but they will also continue to amass the advantages of the castes they are born into. Their anti-caste solidarity gives them credentials. Their radicalism affords them popularity.”

This happens at the cost of edging out of Dalit, Adivasi and Bahujan voices and is distressing Rajamani explains; it creates a narrative in which the word caste itself becomes synonymous with communities that face discrimination. “It’s a very convenient position to focus on atrocities. Savarnas who do that can then occupy a moral high-ground. They’ve talked about the ‘the oppressed’. Why do they never examine instead, the people who actually keep the system of caste running?”

By dedicating, cultural and academic spaces that address caste, to spectacles of oppression, Rajamani tells me, that Savarnas end-up becoming upholders of the caste structure themselves. The comic incongruities that he throws into his film demonstrate the vast expanse between the world of Savarna liberals and progressives and the one they repeatedly declare solidarity with. This disparity becomes evident, in his view, particularly in cultural and academic circles where caste is discussed extensively.

Also Read: The Anti-Caste Film in English Is a Genre in the Making

“Why does talking about caste, like in cinema for example, always mean talking about manual scavenging, honour-killings, sexual assault on Dalit and Adivasi women, without focusing on the communities that enforce this violent hierarchy. Hierarchies are enforced by those higher up, so the gaze should be on them,” says Rajamani, adding that he wanted his film to symbolise the people who endorse such a skewed picture; one that is too often self-congratulatory, and moulded by the vocabulary of upper-caste radicalism.

These are hard-hitting concerns that he tempers with farce in his film. Dilip – who is obsessed with African-American writers Toni Morrison, Ta-Nehisi Coates, James Baldwin – languidly extols: “How he [Baldwin] shaped the social alienation of the protagonist” in Giovanni’s Room, but grumbles in his cab about traffic jams and “fringe-groups”, oblivious to the Ambedkar Jayanti celebrations on the streets.

Aruna is so stricken by her fervour for political correctness, it verges on fanaticism. Yet she unfazedly wonders aloud if her friend at TISS “doing his research on Dalits, may know a Dalit?”

Their film – only the poster of which we get to see featuring the “Dalit character” in brownface – is titled Mahanagar Din Ki Ratri. The laborious double-reference to Satyajit Ray seems a snide remark on the ways lived-experiences of caste are feverishly intellectualised in some spaces. And how disengaged such academic rigours are. 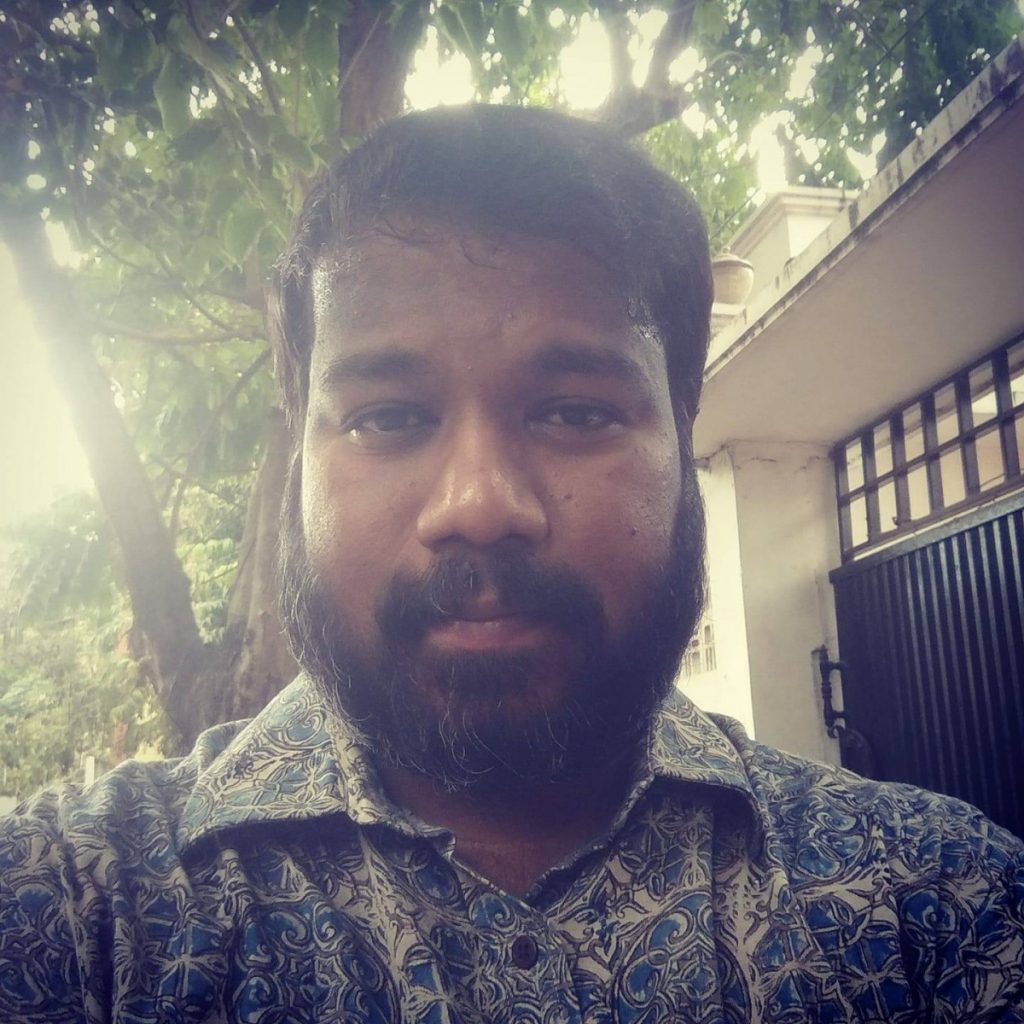 On the decision to respond to these concerns with biting comedy, Rajamani says, “The little discourse there is, is always grim. Why not satirise the problem, instead?” Given the 200-odd comic panels he’s made for his Inedible India Facebook page, its influence has seeped into his scriptwriting, he admits, both in tone and in the choice of whom he chose to mock. The posts for Inedible India were not only about the Narendra Modi-regime. “It’s futile beyond a point to make fun of the right-wing. They’re already a joke. Even with Inedible India, I wanted to question how those who project themselves as having progressive views reacted to caste. This is the same reason I did not make the film about upper-caste conservatives.”

The comic form is also what he became comfortable with, for making characters talk to each other and respond to a situation. When it came to writing the script for The Discreet Charm of the Savarnas, he actually began by putting the story together as comic-panels.

A few reviewers have misinterpreted The Discreet Charm of the Savarnas as a comment on stereotypical representations of Dalit people in popular culture. “The film couldn’t be more explicit in declaring whom it is about,” laughs Rajamani. “Almost all of the screen-time is taken up by these upper-caste/Brahmin characters. That caste is equal to Dalit is ingrained in the Savarna gaze, in the narratives that are constantly spun to establish this equation, so even contrary to the indications on the screen, that’s all they can see.”

The response to the film in general has been overwhelmingly positive, and this has surprised him. “I was expecting more polarised reactions, but maybe since the film is a humorous take on a serious concern, with its light-hearted music, it seems to have resonated with the people it ridicules, at least those who are trying to understand their own roles in caste hierarchies. I don’t know if those who would strongly disagree with the politics of the film have watched it, so I wonder what they’d have to say, if they do,” Rajamani says.

The Discreet Charm of the Savarnas released on September 26 and is available for viewing on the web-channel Neelam Social and is a Neelam Productions film, both initiatives founded and led by film director Pa. Ranjith.

Bharathy Singaravel is a culture reporter and interested in the overlaps between Tamil cinema, protest music and politics.