Where There's Smoke: Seeing Sex in 'Portrait of a Lady on Fire'

'Portrait of a Lady on Fire' plays with cinematic conventions and anticipation of lesbian sex on film. Director Céline Sciamma offers a sophisticated take that is both explicit and elusive. 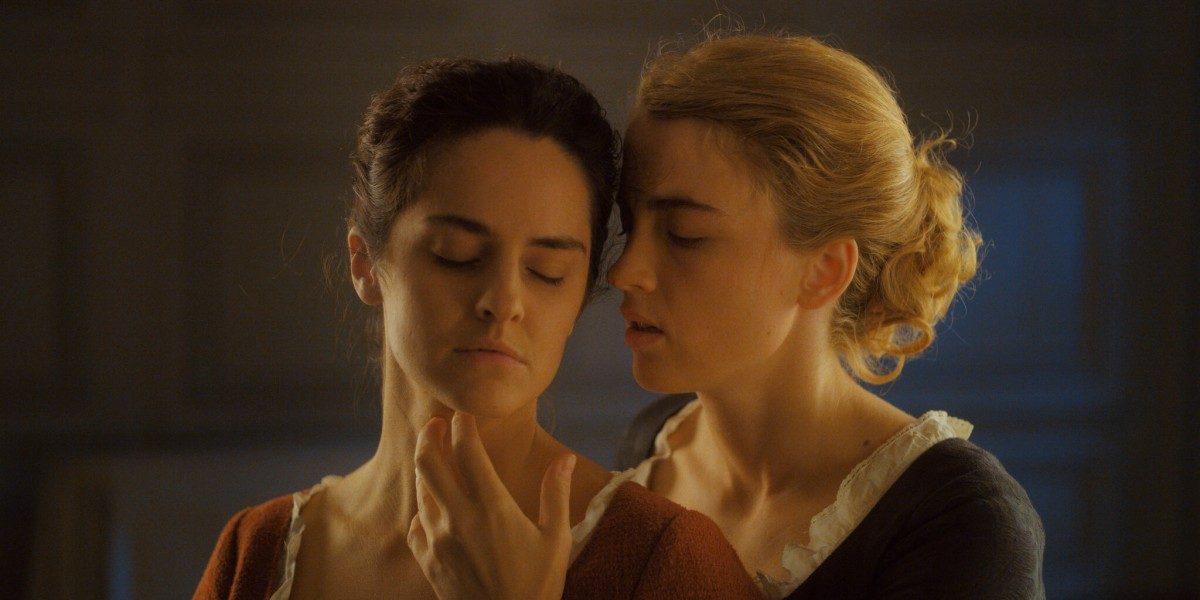 A still from 'Portrait of a Lady on Fire'.

Spoiler alert: This story describes a pivotal film scene that is designed to surprise the viewer.

LGBTQ films tend to provoke debates about authenticity, especially when it comes to sex: should it be represented explicitly or not? Portrait of a Lady on Fire (2019), the latest award-winning film from French director-screenwriter Céline Sciamma, refuses to choose, offering instead a funny and sophisticated response to the politics of lesbian representation. The film has just been released on disc and digital for enjoying in the privacy of lockdown.

Sciamma has a reputation for making films that encourage audiences to think differently about desire. Her first three films, Water Lilies (2007), Tomboy (2011) and Girlhood (2014), avoid triumphant coming out narratives. Instead, each follows the tentative and ambivalent experiences of their young queer protagonists as they negotiate hostile heteronormative worlds.

Sciamma’s latest film turns from adolescent coming-of-age drama to adult lesbian romance. Set in 18th-century France, Portrait of a Lady on Fire centres on the painter Marianne (Noémie Merlant) and the reluctant portrait subject with whom she falls in love. Resisting an arranged marriage, Héloïse (Adèle Haenel) refuses to pose for a painting for her future husband. Marianne is hired ostensibly to be a walking companion, but really to observe Héloïse and paint her in secret.

Across scenes of Marianne glancing surreptitiously at her subject, the film establishes a story of desire. Héloïse’s reciprocal gazes are freighted with homoerotic meaning.

Sciamma’s indirect representations of lesbian desire owe much to the history of classical Hollywood cinema.

When the industry banned explicit representations of sex and so-called sex perversion under the auspices of the Production Code, filmmakers responded by developing a sophisticated system for representing desire and sex. A glance, gesture, line of dialogue or object could be coded with sexual meaning. Because it was “only” implicit or indirect, that meaning could be readily denied by Hollywood studios under pressure to offer wholesome entertainment.

The legacy of classical Hollywood cinema is not over, but the stakes have changed. Now the question is not whether a mainstream film will make queer romance visible, but whether it will include queer sex.

Also read: Review: ‘Never Have I Ever’ Blends Two Familiar Genres but Is Insipid

Abdellatif Kechiche’s Blue Is the Warmest Colour (2013) outraged some lesbian critics for scenes regarded as too explicit and objectifying. On the other hand, Luca Guadagnino’s decision in Call Me By Your Name (2017) to coyly pan to an open window rather than show sex was castigated by influential critic D.A. Miller.

Now you see it, now you don’t

Sciamma has been criticised for not being brave enough to include an explicit sex scene in her film. But the filmmaker insists “there is a sex scene … maybe you haven’t seen it”.

As the lovers lie in bed together, Hélöise proposes to Marianne they try a tincture of psychedelic herbs that promises to stop time. With an arm stretched upward, Hélöise takes some ointment and smears it along her armpit. The film then cuts abruptly to a close-up image of penetration. It’s puzzling at first, but as the camera drifts, we realise its source: Marianne’s finger held close under Hélöise’s armpit.

This visual joke plays on our desires to see sex, desires shaped in part by film style and genre.

One of the conventions of lesbian film romance, exemplified by the cult classic Claire of the Moon (1992), is that audiences will spend the entire film suspended in anticipation, waiting for the climactic sex scene and its combined narrative and sexual release. In Portrait of a Lady on Fire, the image of sex arrives so suddenly in the scene and too soon in the story, it breaks with generic norms.

On one level, the image is a knowing gesture to classical Hollywood cinema imagery. Seemingly innocent body parts have a double meaning. Yet this image of sex goes further. Rather than evoking the raunchy sex scene of contemporary lesbian romance, it mimics the real sex scenes (both hetero and homo) popular in arthouse films since the 1990s.

Instead of trying to guarantee the authenticity of her love scene in a similar way, Sciamma playfully draws attention to the convention itself, and the sexual identities and ideologies it tries to sustain. To refuse to see Sciamma’s scene as a real sex scene is to go along with dominant culture’s blind spots about sex: that it only happens in genitally focused zones of the body, that it always involves penetration of an orifice, and that it must culminate in orgasm.