Above all, 'Phillauri' is a film about love, about its transformative powers, about the hope that it’ll be eternal.

Above all, 'Phillauri' is a film about love, about its transformative powers, about the hope that it’ll be eternal. 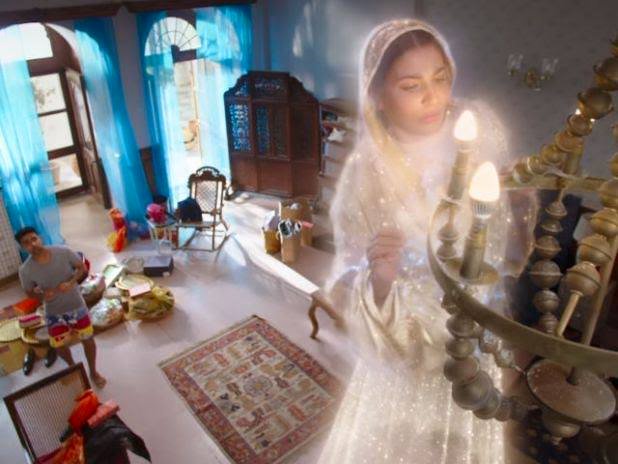 There’s a moment in Phillauri where a man (Manav Vij) discovers his sister’s collection of poetry. The year is 1919, the setting a small village in Phillaur, Punjab. The man is a doctor, a strict disciplinarian, who looks down on the arts, such as writing and singing. Besides, he knows that his sister, Shashi (Anushka Sharma), likes a local singer, Roop Lal (Diljit Dosanjh), and disapproves of their relationship. But while going through his sister’s poems, his hand trailing the paper, he looks outside, watching her write something on the label of a medicine bottle. In that moment, he doesn’t see her as his sister, someone unfairly responsible for upholding familial honour, but simply as Shashi, a gifted writer who deserves to be on her own. The brother, a beefy cold figure, sheds a tear, and soon agrees to their marriage.

Phillauri, starring Anushka, Dosanjh and Suraj Sharma, has several such scenes, where the film pulls its audience closer to itself. In another similar scene, the people of Phillaur are impressed by a poem written by Roop Lal and they read it out to each other. The poem, a love ballad published in a local weekly, has managed to move many: two girls in a courtyard, people near a teashop, one man massaging the other. Scenes like these – wonderfully written, intimately observed, brimming with empathy and joy – often elevate the film.

Switching between the past and present – Phillaur and Ludhiana, 1919 and 2017 – Phillauri seeks to understand whether the passage of time has dimmed the curiosity and innocence of love. Due to events beyond her control, Shashi couldn’t marry the man she loved, died and, 98 years later, comes back as a ghost. On the other hand, the film’s hero in present time, Kanan (Suraj), a Ludhiana-born boy back from Canada after three years, about to get married to Anu (Mehreen Pirzada), his childhood love, is confused. “Isn’t this happening a little too soon?” he asks her. Phillauri hints that in the last few years the two have become different – grown at different rates, in different directions – and, as a result, drifted from each other. The boy was in Canada, the girl in Ludhiana. The boy is into rap, has become more cosmopolitan; the girl is still frozen in childhood memories and a town that doesn’t allow her to grow. The boy smokes weed to alleviate his stress, the girl, happy that he’s come back, doesn’t understand what “BT” – a bad trip – means. And yet, Kanan says he loves her. It’s just that it’s strange – the boy doesn’t quite know what he wants or doesn’t.

The parallels between the old and new, the traditional and modern, are quite obvious in a film like Phillauri, but director Anshai Lal never shoehorns the contrasts or, as it were, the similarities. The two stories, complete with three acts, unfold as separate mini-movies, but the deft writing (by Anvita Dutt) ensures that they flow in and out of each other seamlessly. The 1919 story though, backed by credible performers (Anushka and Dosanjh), is more enjoyable of the two and there are times when the present day story seems contrived. It’s definitely true for the film’s first 20 minutes where Kanan, having discovered a ghost, is trying too hard to appear spooked – and appear spooked in a specific way, one that is dramatic enough to be funny. It doesn’t really work, for Suraj, who debuted with a forgettable performance in a wonderful film, Life of Pi, isn’t a gifted actor. You can see strains of acting – on his face, in his dialogues, in his mannerisms – that keep yanking you out of the story. Even the writing in the film’s initial portion is trying too hard to be quirky, carefree and funny. So we have an elderly aunt who drinks alcohol in the morning; when Kanan arrives from Vancouver, one family member calls the other to inform them that his flight has landed; his relatives welcome him by wearing T-shirts with the words “W”, “E”, “L”, making the word “Welcome” – one of them is also holding a pint of beer. At one point, you want to say, “Okay, we get it, you’re trying to be funny”.

Anushka, on the other hand, carries the film on her shoulders. And Lal directs her wonderfully. There are scenes where Anushka’s just about to smile, her face beginning to flush with happiness, and Lal cuts to a different scene, knowing well that the setup has served its purpose. When Shashi’s friend finds out that she’s pregnant, she says, “Sab kar liya tune uske saath? (You did everything with him, right?)” Shashi, in response, isn’t ashamed; she’s simply quiet for the first few seconds and soon smiles, before laughing out loud. In another scene, where Shashi’s crying, her face doesn’t register grief but anger. Anushka, reliable as ever, gives a wonderful performance in Phillauri, imbuing the film with warmth and humour. And the film, as if taking a cue from her performance, considerably improves in the latter half.

Phillauri finds a new way to narrate an old story, telling it with winning sincerity and simplicity. It’s a film about the power of the arts, about an artist and an everyman trying to find themselves, about the quiet contributions of Indian females, who push their men to do better. But it is, above all, a film about love, about its transformative powers, about the hope that it’ll be eternal. Phillauri is smart enough to be self-aware and pragmatic, but also romantic enough to hope and dream. Cynicism is often the crutch of the lazy and disinterested; Phillauri, thankfully, is neither.