In conversation with Khushboo Ranka and Vinay Shukla, directors of political documentary 'An Insignificant Man'. 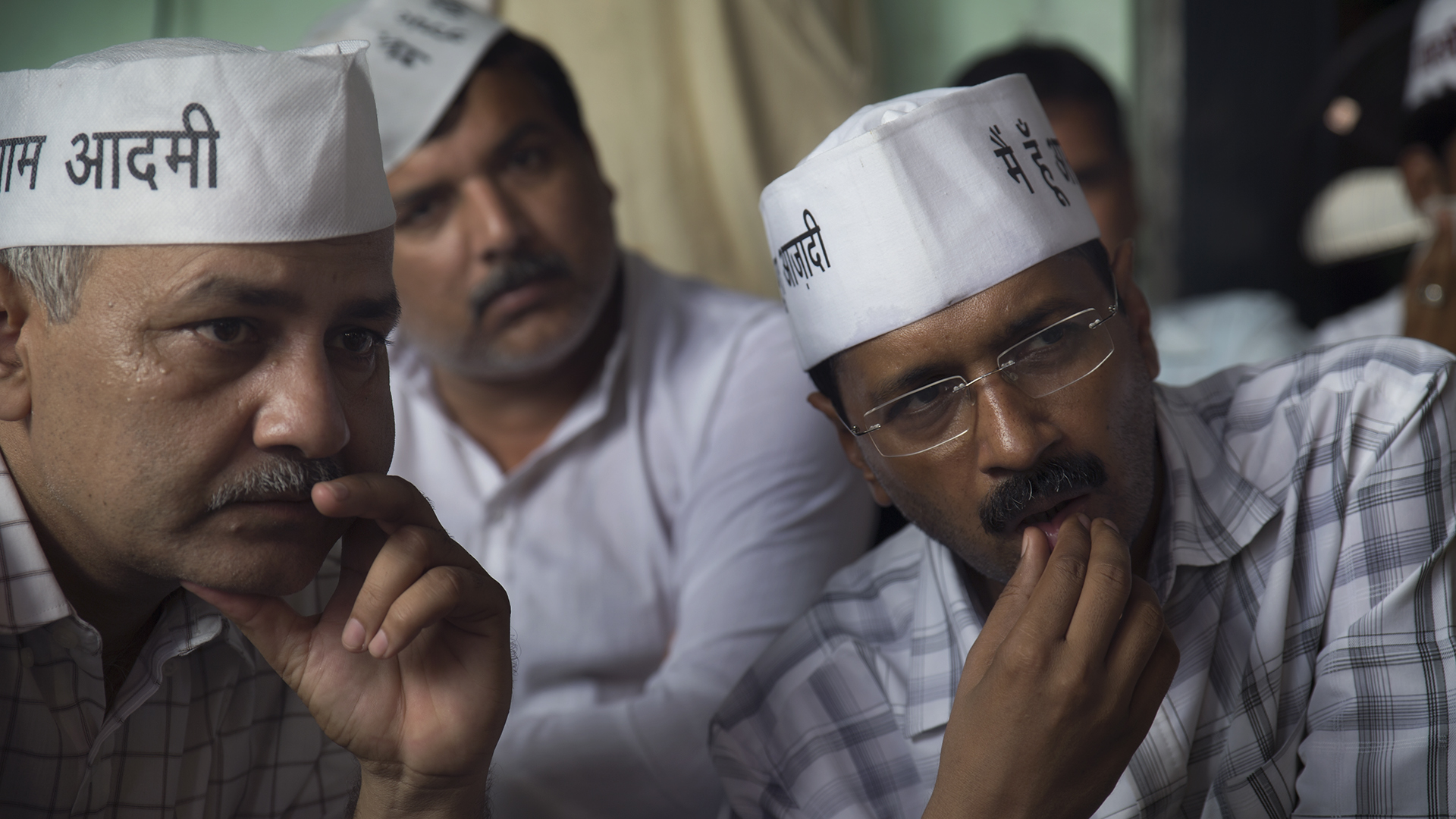 Pahlaj Nihalani, the Central Board of Film Certification (CBFC) chief, is in the news again. This time for imposing strange restrictions on a documentary, An Insignificant Man. Directed by Khushboo Ranka and Vinay Shukla, An Insignificant Man is centred on the formation of an alternate political force, the Aam Aadmi Party (AAP), helmed by activist-whistleblower-turned-politician Arvind Kejriwal. Nihalani has told the filmmakers to obtain the no objection certificates (NOCs) from the prominent politicians featured in the film – Kejriwal, ex-Delhi chief minister Sheila Dikshit, Narendra Modi – and delete six references to the BJP and the Congress. Talking to The Wire, Ranka and Shukla said they oppose the CBFC’s demands, calling them illegal and unethical, remaining determined to fight for their film’s theatrical release.

The CBFC has censored many films on frivolous grounds, ranging from profanity and homosexuality to duration of kisses. But An Insignificant Man is a political documentary. Were you apprehensive before approaching the censor board?

Ranka: We were on two extremes. We thought they’ll either outright deny [the certificate] on some strange ground, like they’re prone to, or they’ll grant us the certificate. So we were looking at both the possibilities. We had even spoken to a lot of people. We speak to [documentary filmmaker] Anand Patwardhan quite often and he said, “You won’t have any problem at all.”

But now it’s neither here nor there. They said that, “We’ve passed your film, just get us these things [the NOCs from Kejriwal, Dikshit and Modi], and beep out the Congress and BJP from six places.” We don’t think those NOCs are a justified demand. And secondly, beeping out the name of political parties is strange. Like, why would you ask us that?

Ranka: Yes, and that’s what we’ve been saying. So basically, they laid out impossible demands, which effectively bans the film. And not just impossible, they’re also illegal and unethical. Illegal because the Cinematograph Act doesn’t have any condition for mandatory NOCs. There’s no precedent. There’ve been documentaries which have never been asked for an NOC. Anand Patwardhan has never been asked for an NOC. I spoke to Kamal Swaroop [the director of The Battle of Benaras],and he said he was never asked for an NOC. His film was just banned. So there is no consistency.

It’s also unethical because politicians are in the public domain; they are the most powerful people. So, if anything, they should be subjected to the highest scrutiny. Again, if the censor board had a problem with us misrepresenting facts, presenting fake news or getting into a sub judice matter, then we’d be okay with that. But they don’t have those problems. So essentially they want us to take permissions from politicians who are being critiqued.

You first applied for the certification in February, screening the film for the censor board’s examining committee. What was communicated to you after it?

Shukla: It was pretty Kafkaesque. Usually they see the film and tell you what the problem is: what needs to be cut, what needs to be changed. In our case their discussion went on for an hour after the screening – so much so that they took a break. Then we went in and they told us in a very bureaucratic language that we’ll not speak to you about the film. We said, “Do you have any problems with it? What does this mean?” They replied, “We’ll let you know our problems in a letter.” So we said, “The two of us are here; it’s a forum where filmmakers can represent their concerns and so can you, so before anything, let’s talk about what it is that’s bothering you.” They said, “We just won’t speak to you.” And just as we were moving out, one of the censor board committee members goes, “But, everything aside, it’s a great film.” And then the room falls silent again. So it was quite strange for us, because we weren’t sure what’s happening. Then nearly ten days later, we got a letter from them, which said, “Your film has been referred to the revising committee by the CBFC chief, Mr Nihalani”, and we were asked to pay the application fee, completely bypassing any reasons for why they had referred it to the revising committee.

The letter did not specify a reason?

Shukla: No. The first letter, which said that the film is going to the RC [Revising Committee], didn’t give us any reason. So we thought this is strange. We asked various people what we should do from here on. And everyone said that it’s a protocol to give a reason. So we went and met the various officials at the CBFC office. All of them said, “Yes, we usually give reasons, but in this case we don’t know, you’ll have to speak to Mr Nihalani.” I went to meet with Mr Nihalani in February and I told him, “The process of reapplication is expensive. There are so many partners in the film, people have put their money; everyone wants to know what is happening exactly. So if you could tell us your concerns, it’d be helpful in communicating to everyone.”

And he said, “I’m not obliged to give you any answers or clarifications. You do whatever you want.” Then he called his peon and told him to escort me out. So it seemed completely uncalled for – the way the board behaved. We wrote them a formal letter, asking what Cinematograph Act clauses we’re violating. In reply to that letter they sent us the first letter, which had no reasons.

Finally, we applied for the revising committee screening and were told to get the NOCs, and beep out the names of the Congress and the BJP.

Nihalani’s been criticised for his politically-motivated decisions. The Udta Punjab case is well known. (“I’ve heard Anurag Kashyap has taken money from AAP to show Punjab in bad light,” Nihalani had said then.) In a recent film, Sameer, he wanted the line “Mann ki baat” to be removed, because it’s the name of prime minister’s show. He’s called himself a “proud Modi chamcha”. In such a scenario, what do you make of Nihalani clamping down on a documentary on Kejriwal, the opposition leader?

Ranka: After they saw the film, and this happened during the examining committee screening too, they’d leak the news to the media. So even before we had any official communication from them, it’d get out. In this case also [the revising committee screening], we had started seeing reports and one of them mentioned that he had asked for an NOC from Kejriwal because he thought it’s “potentially damaging” to his reputation. So there’s that.

Also, is it up to him to protect the reputation of people and politicians? And secondly, when it comes to a politically-motivated [censor board], as filmmakers who have made a political film, we’ve consciously stayed away from talking about it, because we don’t want to make it into a polarising this-party-vs-that-party debate. We want people to see the documentary in a critical way. Those who watched the film have had wildly different readings and we’d like it to be that way.

Two more documentaries have been banned under Nihalani’s tenure. The Battle for Banaras, which documented the electoral tussle between Kejriwal and Modi in the 2014 Lok Sabha elections, was denied a censor certificate. (Nihalani called it “pro-Kejriwal in the way it’s been shot”.) Then En Dinon Muzaffarnagar, an investigative piece on the 2013 Muzaffarnagar riots, was embroiled in a censorship battle for nearly two years. Do you think the future of investigative documentaries – especially when they’re political – faces a threat in this country?

Ranka: I understand what you’re saying, but even the past has been like this. You’ve films like Kissa Kursi Ka, you’ve seen Aandhi, even Anand Patwardhan’s documentaries. So the future and the past and the present of [political films] are equally… it’s difficult to make political films, and that’s why there’re so few of them. And that is why the reform has to come from a legal space. All the decisions that Pahlaj Nihalani has made have been overturned by the FCAT [Film Certification Appellate Tribunal], which means they were not legally sound. So basically you’ve this guy who is continuously making whimsical and random decisions, which then the filmmakers have to fight in court.

Shukla: The censor board – in any case, any scenario – should not be acting as the political outpost of any party or politician.

Shukla: Both of us understand your concerns about the rising censorship. But the current didn’t start from this administration; it’s been coming a long way. That’s the reason we don’t see any political films.

Ranka: But I definitely feel things have become more whimsical since Pahlaj Nihalani has come. His decisions are completely random and absurd.

An Insignificant Man chronicles the rise of AAP and Arvind Kejriwal – a story that unfolded in 2013. As we know, that story has markedly changed since. Are you concerned that the delays caused by the censor board will make the documentary dated?

Shukla: We have to delink the idea of documentary from the idea of contemporary news. Our film is a more long-form meditative look at these activists who decide to become politicians and then what happens. Of course, the contemporary reality keeps changing, the stories of people whom you’re documenting keeps changing, but we take great solace in the fact that whenever people see the film, they walk away with more questions and curiosity, and not less.

At the same time, there’s a pressure of getting the film out as soon as possible. No film can exist in its cocoon forever, saying whenever it’ll go out it’s fine. And Mr Nihalani has put us in a difficult position, considering how much time it has taken and how much time it’s going to take from here.

What’s your next course of action? Will you be applying to the FCAT?