From a Dull Night at the Oscars, All We're Likely to Remember Years Later Is the Slap

The ceremony started on a weird note, too, with the Academy cutting out the eight technical awards from the live broadcast. 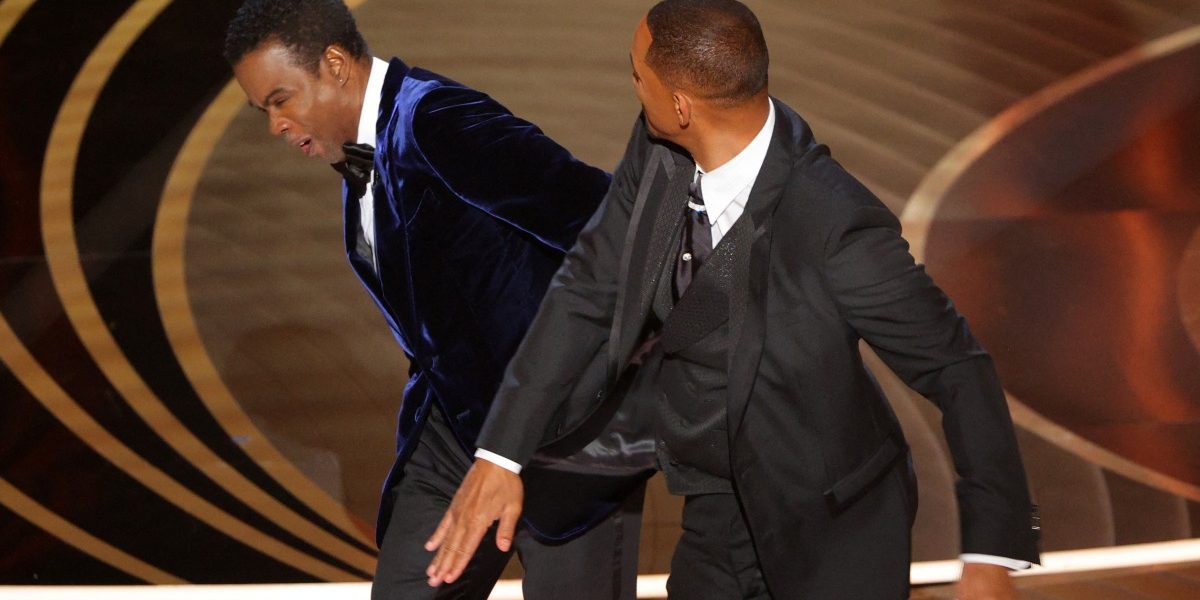 The 94th Academy Awards were so bland, and so boring, that you could count the memorable moments on the fingers of half a hand. But the one that stood out was so remarkably rare that people will discuss it for years, if not decades, to come. Will Smith – nothing can prepare you for the next half of the sentence – punched Chris Rock on stage. Presenting the Best Documentary Feature award, the stand-up comedian cracked a joke about Jada Pinkett Smith, the actor’s wife, being in “G.I. Jane” because of her shaved head. A few seconds later, Smith walked towards Rock, hit him, and took his seat. Yes, it really did happen and, no, it wasn’t scripted. Rock took it well, saying, “Wow, Will Smith just smacked the shit out of me.” The actor screamed: “Keep my wife’s name out of your fucking mouth.”

That wasn’t it. Smith reappeared on stage, accepting the Best Actor award for the role of Serena and Venus Williams’s unrelenting father in the drama King Richard. The moment was awkward enough, and Smith’s speech didn’t help. He began by defending his assault, saying, “Richard Williams was a fierce defender of his family.” He then said something bizarrely contradictory (“I want to be a vessel for love”), then cried, then signed off on a self-aware note (“art imitates life. I look like the crazy father, just like they said about Richard Williams. But love will make you do crazy things”) — including, of course, punching someone in the face.

The ceremony started on a weird note, too, with the Academy cutting out the eight technical awards from the live broadcast. They were presented before the ‘main event’, and that trimmed footage was spliced later in the show. Responding to the recent low ratings, the Academy wanted to make the programme tight. But many Hollywood figures criticised the move, saying it relegated the film technicians to “second class citizens”. That choice felt even more strange, as the ceremony featured a long tribute to “60 years of James Bond”. Out of those eight categories – including Best Editing, Sound, Makeup and Hairstyling, Original Score, Production Design, Documentary Short, Animated Short, and Live Action Short – Denis Villeneuve’s epic sci-fi, Dune, won four. It also took the Best Visual Effects and Best Cinematography trophies, winning six awards in total – the most by any film this year.

Two Indian documentary filmmakers, Rintu Thomas and Sushmit Ghosh, were nominated for Writing With Fire, but the award went to Questlove’s Summer of Soul, a piece on the 1969 Harlem Cultural Festival. Nominated for three Oscars, Encanto won the Best Animated Feature. Ryusuke Hamaguchi’s haunting and poetic Drive My Car, adapted from a Haruki Murakami short story, won the Best International Feature – perhaps the only sure-shot award of the night as, like Parasite, it also got a Best Picture nod. Kenneth Branagh won the Best Original Screenplay for Belfast, a moving account of his growing up years in conflict-torn Northern Ireland. Sian Heder’s CODA – a coming-of-age dramedy centred on a deaf family – won the Best Adapted Screenplay.

Ariana DeBose became the first Black queer woman to win an acting award – the Best Supporting Actress for West Side Story. Her counterpart, CODA’s Troy Kotsur, became the first deaf man to get the honour. Unlike many previous editions, this year’s Oscars weren’t dominated by one movie across big categories. The Best Picture, Director, Actor and Actresses awards were attached to different films. The Best Actress category – filled with stunning performances, from Nicole Kidman to Olivia Colman to Penelope Cruz – was won by Jessica Chastain for The Eyes of Tammy Faye, the biopic of a renowned evangelist. The Best Director contenders featured veteran heavyweights renowned for remarkable consistency – such as Steven Spielberg (the first director to be nominated across six decades), Branagh (his seventh Oscar appearance in seven different fields) and Jane Campion (the first woman filmmaker to be nominated twice for the Best Director) – and the Japanese arthouse filmmaker Hamaguchi and Paul Thomas Anderson in his 11th Academy Award nod.

A superb rumination on toxic masculinity that also subverts the Western genre, The Power of the Dog made Campion win her second Oscar. The Best Picture award – featuring 10 movies representing a wide variety of genres and styles – also set a unique precedent. Because for the first time in the history of the Academy Awards, a movie premiering on a streaming platform, Apple TV+, won the Best Picture: CODA. But years later, many of these achievements could be reduced to a mere footnote, overshadowed by the night’s headline: Smith punching Rock. Maybe it’s fair, as the ceremony had barely anything else to offer. Floundering for the last several years, the Academy Awards needs desperate course correction; hopefully, it does so without humiliating its technicians or a nominee slapping a presenter.