'One Cut of the Dead' Is a Wonderful Ode to Moviemaking

Shin’ichirô Ueda’s film makes you time travel, and the child in you smiles with a glint in her eye. 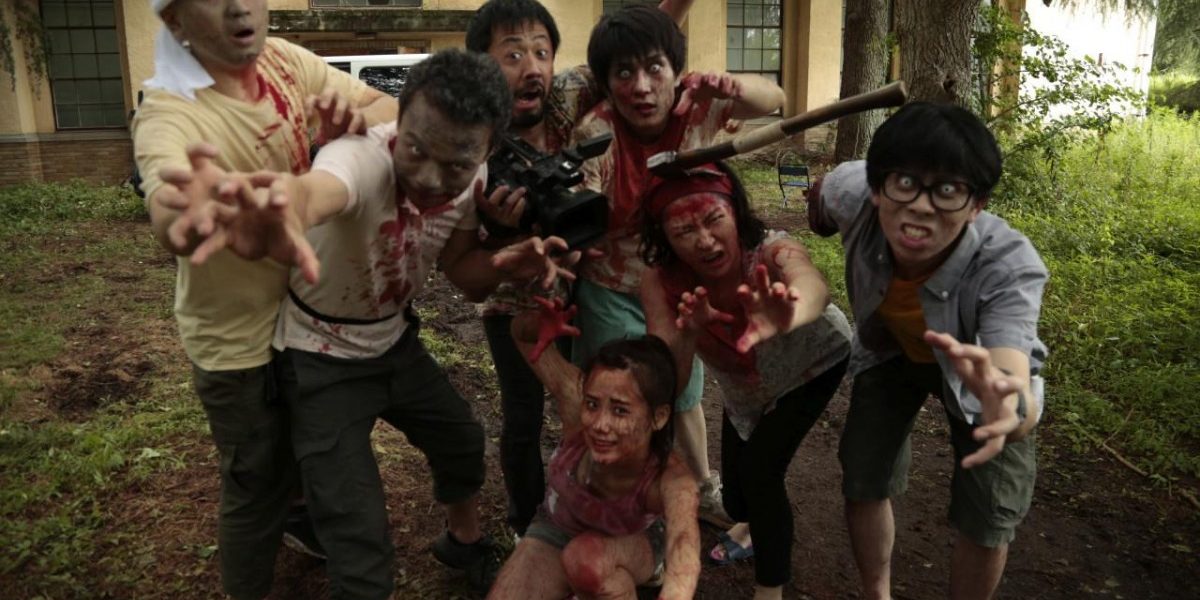 I walked into Shin’ichirô Ueda’s One Cut of the Dead (2017) knowing little about it. Acquainted with the After Dark section of the Mumbai Film Festival, I knew that this was a “horror” film. I knew its runtime: 96 minutes. I knew, through its synopsis, that the film began with a 37-minute long take, revolving around a film crew making a zombie movie in an abandoned warehouse, where the real zombies turn up. I knew that it had generated a lot of buzz after its first screening, resulting in another show on public demand. But in today’s age of instant hysteria, nothing is as good or as bad as it’s proclaimed, reasoned my cynical, pragmatic self – and yet the 12-year-old movie nerd in me wanted the film to live up to its hype. My expectation was constantly see-sawing, tussling with itself. And when the film was over, I was picking pieces of my brain from the aisles in the theatre.

Executing a long take has always been tough, because all it takes is one mistake, and the entire thing needs to be redone. It becomes all the more exasperating if the shot’s duration is sizeable. (Imagine getting something wrong on the 36th minute of a 37-minute shot.) Long takes are even tougher if they involve multiple actors, changing locations and action sequences – One Cut of the Dead’s first scene has all of them. At the start, we see a film crew making a movie: the director is agitated; the actors are nervous (this is the 42nd take, and they still haven’t got it right). The movie began (both One Cut of the Dead and the film-within-a-film) and, initially, looked impressive. And yet, I had a slight sense of unease, because something felt off.

“Impressive cinematography but amateurish acting – strange combination,” I hurriedly typed into my phone, as One Cut of the Dead began. “The film is funny, but the humour is very schoolboyish,” I continued. “There are awkward pauses in some portions, smoothened over by random snatches of dialogue. Different actors enter and exit the frame – this must have been tough to shoot.” A few minutes later: “Every scene of violence is shot through comedy – not sure what to make of it.” A lot was happening: “The zombies look drunk and stoned (but zombies are zombies, and maybe this is normal behaviour in zombie-land, so what do I know anyway?).” It kept getting more bizarre: “There’s a random dude in the corner of the frame, silently sitting holding his stomach – what the actual hell is happening?” Towards the end of the long take: “This looks very cheesy (a character says that in as many words), but it is, in a strange way, captivating.” And finally when, quite strangely, the end credits rolled after 37 minutes: “Despite so much happening, they managed to stick to a single take. Quite fascinating – it’d be interesting to see the making of this film.”

At that point, I should have reminded myself of the old Chinese adage: “Be careful what you wish for, lest it come true.” Because the film then cuts to “one month ago”, and what follows, a few minutes later, is absurdity, eccentricity and frivolity bundled together, lit by an explosive fondness for moviemaking and an insatiable desire to subvert every rule of the zombie movie genre.

Cinephiles often talk about the “big screen experience” – a rarity in today’s age where, because of Netflix and other streaming devices, everything is available at the click of a button. But that longing holds some merit, and some films make a strong case for it. Take Alfonso Cuarón’s Roma, for instance, whose sound design (materialising using Dolby Atmos technology) can’t be replicated on a small screen. More than once, while watching Roma, I turned around to check who was talking inside the hall, because in several scenes, the sound enters the frame (and indeed the theatre) from the back before the accompanying visuals come on screen. (Those were sounds of children prattling in the movie in the background.)

This experience is cerebral, where you enjoy and appreciate the craft, where a film isn’t just about story or acting. Then there’s an experience of another kind, which is emotional and communal. I felt it for the first time in 2001, while watching Lagaan. The film, in its second half, transcended its subplots, characters and themes, for we were living it in moments. We weren’t just watching the movie; we were cheering it. There is something therapeutic about sharing laughter and sighs in a theatre – especially in today’s times when people have become Twitter handles, emotions have become emojis and there’s a desperate urge to pose. Watching a film with strangers, in such a case, and letting your guard down feels pure and humane; it feels like a small act of rebellion.

Also read: Dropped from MAMI, a Film About Misogyny Becomes ‘Collateral Damage’ of the #MeToo Movement

One Cut of the Dead, too, has a longish segment where the theatre becomes a stadium. Watching it yesterday, in an Andheri multiplex, felt like coming home. Laughing, applauding and whistling, we were all behind the film, wanting it to smash rules and succeed. The sense of anticipation in the theatre was so heightened that it felt like we were united by a single question, “Will the filmmaker go there?” Followed almost instantaneously with, “Oh, he did! He so did!” We were the questions; the film was the answer.

A Bollywood film, a single screen theatre in Jharkhand, 2001; a Japanese movie, a multiplex in Maharashtra, 2018: two different languages, two different audiences, two different decades, and yet the fundamental feeling – of being in thrall to cinema, of being silly and innocent and joyous – was the same. This is what people mean when they say that cinema is universal, that it can bridge barriers, dissolve time, make us complete. This isn’t vacant sentimentality but simply a recognition of the ethereal powers of an art form. It’s only befitting that such a feeling came via One Cut of the Dead, because it’s a wonderful ode to moviemaking – embracing its highs, lows, last minute screw ups, impromptu ingenuity, close collaborations, intense deliberations.

In today’s age of anger, this is the best that can happen. As long as there are films like One Cut of the Dead, slicing our gloom and disenchantment through good old art, there is hope. Yesterday was the film’s last show, and it’s unlikely to release in India, but you know there are ways. I hope you watch this film – blow it up on a projector, play it on an LCD screen, or stream it on a laptop. But I hope you watch it, and watch it with your movie-crazy friends – the ones who dissect and debate a film in all its minuteness. Innocence can be neither remembered nor bought; it can only be felt. One Cut of the Dead makes you time travel, and the child in you smiles with a glint in her eye.