Why Newton’s Story of Democracy is Both Unique and Universal

The film’s plot is located so securely within the actual world of central Indian counterinsurgency that to claim an external inspiration would be a gross injustice.

A still from 'Newton'.

Note: This article was originally published on October 5, 2017, and is being republished in light of ‘Newton’ winning the Best Hindi Film award at the 65th National Film Award.

Newton is a film about madness and misadventure, about passion as much as precision, about the forest and about fear. Ostensibly a story about a polling officer intent on enabling voting in a place where nobody is interested in the vote, it raises questions at many levels, without claiming to provide answers. Perhaps the forest itself is the answer – a space where one can lose and find oneself but in new and unexpected ways. And perhaps democracy is like a forest where one is forever going down the wrong path, and must pause to retrace one’s steps, to reach a destination which one didn’t know one was seeking or indeed, that it even existed.

In the wake of Newton’s nomination for the Oscar, some have claimed that its story resembles the Iranian filmSecret Ballot. Any comparison between Newton and the Secret Ballot must rest, however, only on the fact that the equation of democracy with mere electoralism is a problem the world over. Remember the old Khruschev-era joke? A worker goes to a polling station to vote. An official there gives him an envelope and asks him to put it in a box. The worker starts opening the envelope. ‘What are you doing?’ the official shouts. “I want to see who I am voting for,” the worker says. “You can’t,” says the official indignantly. “It’s a secret ballot!” As the trappings of formal democracy collide with reality, artists and writers, humourists and film makers have responded to this in ways that reflect the irrationality of their own situation.

Also read: Concept of ‘Newton’ May Be Similar to ‘Secret Ballot’, but the Treatment Is Very Different

Newton’s story is located so securely within the actual world of central Indian counterinsurgency, layering nuance upon nuance, that to claim an external inspiration would be a gross injustice.

Starting from the Mahendra Karma-like figure who is seen campaigning (the film makers even found a similar looking character with similar sounding bombast) and who is killed soon after, to the designed-for dramatic-fear-inducing effect of making all the civilians wear flak jackets or warning them that pissing might inadvertently set off a landmine, to the special police officers chatting among themselves and offering to negotiate surrender deals “precisely because the government knows you are not a Naxalite”, to the CRPF commander’s contempt for the IAS, to the scene with the child ‘informers’, to the faked Maoist attack after lunch, the film beautifully captures the sights, sounds and rumours of the state-Maoist conflict.

Some things are likely, given that polling agents have been attacked and looted, and that bal sangham members do serve as informers, but equally, many things are unlikely – and the point of the razor edge of life in the forest is that nobody knows and yet everybody thinks they know or likes to pretend to know.

The basic plot about an honest official bent on implementing the law or his/her assigned project in the face of indifference and seeming futility – is a universal story about the lunacy of enterprises which aim to maintain the black letter of the law or elections or indeed any other bureaucratic norm in a world where the ruling impulse is something else entirely. In 1901, the census officials who were enumerating the Andamans for the first time took their task so seriously that when they were accosted by Jarawas, they opened fire in the process, killing one islander. For these colonial enumerators, intent on counting and measuring the last man or woman, it was only a small slip from headcounting to headhunting.

Electoral democracy is generally to be preferred over dictatorship – and as the Sanjai Mishra character says at the beginning – echoing former chief election commisioner S.Y. Quraishi’s description of the scale of the Indian elections – Indian democracy is a war waged by the people themselves. However, it can equally well segue into a war waged by the government against the people. One of the basic norms of counterinsurgency developed by the British during the long emergency in Malaya (1948-1960) was that the semblance of government must be maintained at all costs, with the district administrators present and reporting regardless of whether their writ really worked on the ground. Elections serve the same function – of engraving the signature of the Indian state in places where it is most deeply contested, such that voters are dragged out at gunpoint.

Democracy is also used as a weapon to deny citizens basic rights, albeit in the name of their own welfare. Thus the attorney general can tell the Supreme Court that citizens have no right to privacy if they want social services. In adivasi India today, law too serves much the same purpose – of becoming an instrument of harassment for the victim rather than a tool of redress. The absence of an FIR because it is the police or CRPF who have committed the crime is used to claim that nothing did or could have happened. Newton brings this lesson home, in the lightest of manners, with the mere twitch of an eye, through silence rather than contrived speech, and for that it deserves more than an Oscar – it deserves space in the permanent hall of real democracy. 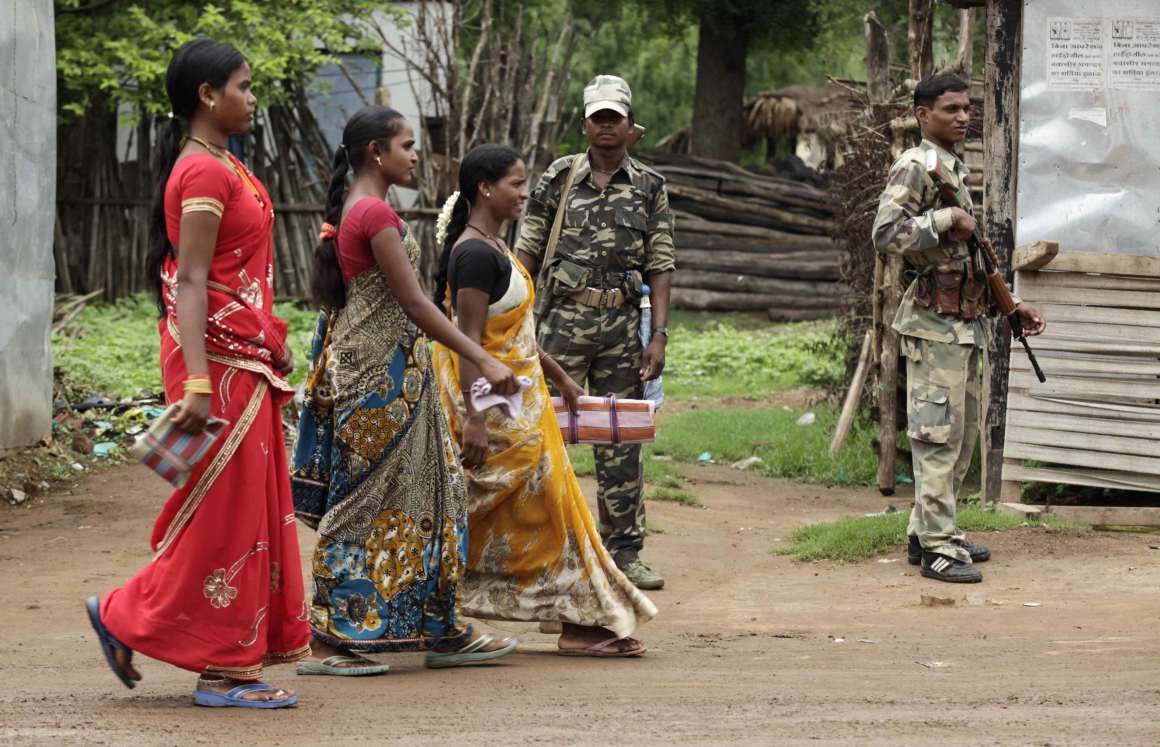 I have four concerns with the film, but none of them should be taken to detract from my desire that everyone must see this film. Perhaps what I would really like is that everyone should read my book, The Burning Forest, alongside.

My first concern is that it assumes too much familiarity with Bastar’s recent history. The references to villages being burnt and their inhabitants being moved to camp would be lost on those who don’t know about the havoc wrought by Salwa Judum. Perhaps the film ought to have had a line or two explaining the context for those viewers who might be unaware of the Judum.

The second is that it assumes people will interpret adivasi silence as the silence of resistance and not the silence of ignorance. True that in the scene where the villagers are standing in line to vote and look on silently as the visiting IG says within earshot that it must have been the Maoists who burnt the villages, we are shown that some of them do understand Hindi and know that he is lying. But perhaps not everyone would understand the situation.

Third, people may well come away feeling that the problem is ‘adivasi backwardness’, that if candidates were allowed to canvass, and more adivasis were literate, electoral democracy would succeed over Maoism. In fact, there is greater awareness of political parties and what they can offer as well as where they fail and what Maoists can offer instead, than the film gives the villagers credit for. The last scene where the returning tendu patta picking youth come to vote leaves the question open, but by making it a generational issue, one is tempted to assume that the film points to elections as the way of the youth and therefore of the future.

And finally, given how well Pankaj Tripathi acts as the CRPF commander, and how innocent Newton is, the cynical viewer might well come away thinking that the former is a realist, and the latter a ‘useless idealist’, and that is just the way this war is. The boredom and fear endured by the CRPF sent out on a war not of their own choosing can either invite calls for more night vision goggles, or engender deeper vision. It depends on the viewer.

Everyone who sees this film will recognise, however, that it is not just Newton whom the war has turned temporarily insane. For our collective sanity, it tells us, we need to craft a different story on Indian democracy, one that has meaning from Bastar to Bandra.

Nandini Sundar is the author of The Burning Forest: India’s War in Bastar, Juggernaut Press, 2016.

Note: In an earlier version, the actor Sanjai Mishra was wrongly identified as Pankaj Mishra