Home, in Chloé Zhao’s film, is a season that has passed, leaving behind memories and souvenirs. 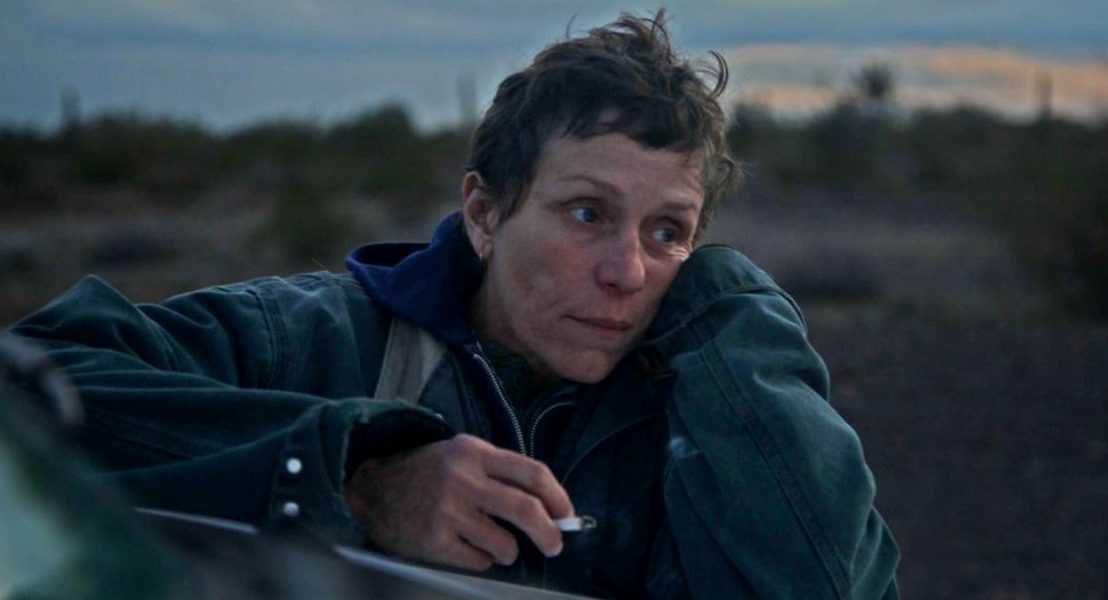 A still from 'Nomadland'.

Fern (Frances McDormand) has a cold hard face. It can withstand all: low pay, harsh winds, long hours. She changes towns every few weeks with a practiced ease. A new workplace, new colleagues, new companions – but the same old home. Fern, a gig worker, carries her world wherever she travels: she lives out of a Recreational Vehicle, a mobile home that moves on wheels.

But, as she would explain, she’s not homeless but “houseless”. People offer help but she declines. These choices emphasise personal dignity but also obstinance and isolation – a wilful rejection of societal norms. Her literal journeys are an extension of a figurative one, running from heart to mind, from grief to acceptance. Home, in Chloé Zhao’s Nomadland, is a season that has passed, leaving behind memories and souvenirs.

The movie opens to Fern loading her RV with personal belongings. She holds some items – a dinner plate, an old pair of jeans – for a few seconds longer, as if lost in an elaborate trance or a silent conversation. Moments like these highlight the film’s primary curiosity: probing the very essence of homelessness – and the futility of purported choice in such an exercise. Fern ‘decided’ to be homeless after her husband died and the only manufacturing plant in her hometown, Empire, Nevada, closed. She had no children, so she moved – and kept moving. But is ‘leaving’ the home same as being evicted from it by grief? Is a choice made under compulsion, a choice at all?

Podcast | Bombay Begums Is About the Real Problems of Real Women: Pooja Bhatt

She meets other nomads on the way, as the movie starts to open. Her friend and colleague, Linda May, tells her that in 2008, after the Great Recession, she wanted to kill herself. Linda had been working since the age of 12, but even after five decades, she just had $550 in her social security. She chose to live, finding value in things untainted by money: her dogs and self-respect. Linda invites Fern to a desert rendezvous in Arizona, organised by Bob Welles, a legendary vandweller and a popular YouTuber, whose annual gatherings have come to define the American nomadic culture. Fern meets a 75-year-old woman, Swankie, at the campsite who, diagnosed with cancer, has decided to live her last few months on her own terms.

Death is a constant presence in Nomadland. It has shaped Fern, Linda and Swankie’s lives. Even Bob took to an RV due to the death of his son. But the drama is also marked by a different kind of (unacknowledged) death: the death of the American middle-class – the death of the American dream. The RV culture among the older Americans, especially after the Great Recession, is a reflection of its devastating aftermath. Fern, even after numerous part-time jobs, desperately needs a gig. Taking an early retirement is not an option; she can’t “get on by benefits”. She works such long hours – at an Amazon warehouse, for example – that sitting on a chair in a store lulls her to sleep. When she can’t afford the van repairs, she visits her sister to borrow some money. Even the ‘choice’ of leaving Empire was, in part, motivated by the lack of earning opportunity.

Nomadland is informed by an intriguing conical structure, where the increasing breadth of Fern’s life runs parallel to despair accommodating hope and, at times literally, light dispelling the dark. The film opens to a cold blue palette: overcast skies, heaving winds, frigid air – and a frequent snowfall that feels like divine punishment. The sunlight enters the frame for the first time at Bob’s campsite, where Fern is spending time with the people of her tribe. As she befriends more nomads, the frames get warmer. She drops frequent smiles, as her face turns soft like a girl, showing glimpses of a long-gone life. This is a smart structural choice because, much like most negotiations with grief, it feels ironic on the surface: the only way to squash sorrow is to embrace it.

Even years after her husband’s death though, Fern continues to struggle. Leaving home and hitting the road resulted in a different life – a change implemented to bury her grief. But she only managed to change zip codes. Her RV became a literal storehouse of her husband’s memories: his clothes, his souvenirs, his pictures. It became her coping mechanism – an unlikely offshoot of her PTSD. Zhao tackles heavy themes with impressive clarity, never reducing Fern to her wretched circumstances. But some of her scenes become pathos-ridden informational heaps, underlining the central thesis. At the start of the film, Fern’s colleague, working at Amazon, (quite abruptly) talks about her relationship with the band The Smiths, whose lyrics she’s tattooed: “Home, is it just a word? Or is it something that you carry within you”?

Near the climax, Fern explains her decision to be rootless – a nugget of information that needed a lighter hand. Even Fern listening to Swankie’s last wish feels like an obvious bit of foreshadowing. A later scene, as expected, does honour her want, turning a sobering moment into a filmmaking cliché. But McDormand produces a masterful example of economic acting, wearing Fern’s minimalism on her face: most times, all she has is a nod, a smile, few lines.

This drama, much like its characters, is also suspended between homes. But unlike them, Nomadland is (largely) unaware. That is so because the film is marked by curious contradictions: between fiction and nonfiction, the personal and the political, the individual and the collective. Almost every destabilising factor in the nomads’ lives – low paying gigs, demanding hours, shrinking safety nets – didn’t just happen overnight, or even after the Great Recession. It’s part of a five-decade long onslaught, where capital has destroyed labour via union busting, regressive taxation, stagnant pays, reducing people to machines. But Zhao doesn’t care for this part of the story, contradicting the journalistic and political preoccupations of its source material, the 2017 narrative nonfiction book Nomadland: Surviving America in the Twenty-First Century. “Many of the people I met felt that they had spent too long losing a rigged game,” writes author Jessica Bruder in the initial pages of the book. “And so, they found a way to hack the system” – “breaking the shackles of rents and mortgages” in lieu of a nomadic lifestyle.

But the ‘rigged system’ is more or less absent in the film. Besides Linda talking about her economic crisis and Bob mentioning the “tyranny of the marketplace”, Nomadland’s narrative framing makes it a story of unresolved grief, reducing a national sorrow to an individual despair. (It’s all the more disappointing because Linda and Bob, characters in the book, are playing themselves in the movie.) Fern, according to Zhao, just happens to be in this situation. Had her husband not died, implies the movie, she probably would not have been in an RV. Does this elision make Nomadland mediocre? No. But it does make the film incomplete and indifferent – and that distinction is crucial. Making the structural personal is in fact a preferred trick of the status quo – and the eternal myth of American capitalism.

Zhao didn’t even need to dig deep: just a few scenes would have broadened the big picture, as shown in Ken Loach’s Sorry We Missed You and Bong Joon-ho’s Parasite. In the last year’s Best-Picture Oscar winner, for instance, a few lines of dialogue depict the economic insecurity of the South Korean middle-class. (That scene is so sharp and understated that you may have missed it.) Ditto Loach’s searing domestic drama, where the familial and the political was so closely tied that the movie told multiple stories at once, illuminating the cause-and-effect relationship between them. Nomadland, on the contrary, almost exists on two parallel planes. It opens its heart for the personal but closes its mind for the political.