While Chandraprakash Dwivedi's screenplay is remarkable, the acting in 'Mohalla Assi' is often theatrical and melodramatic. 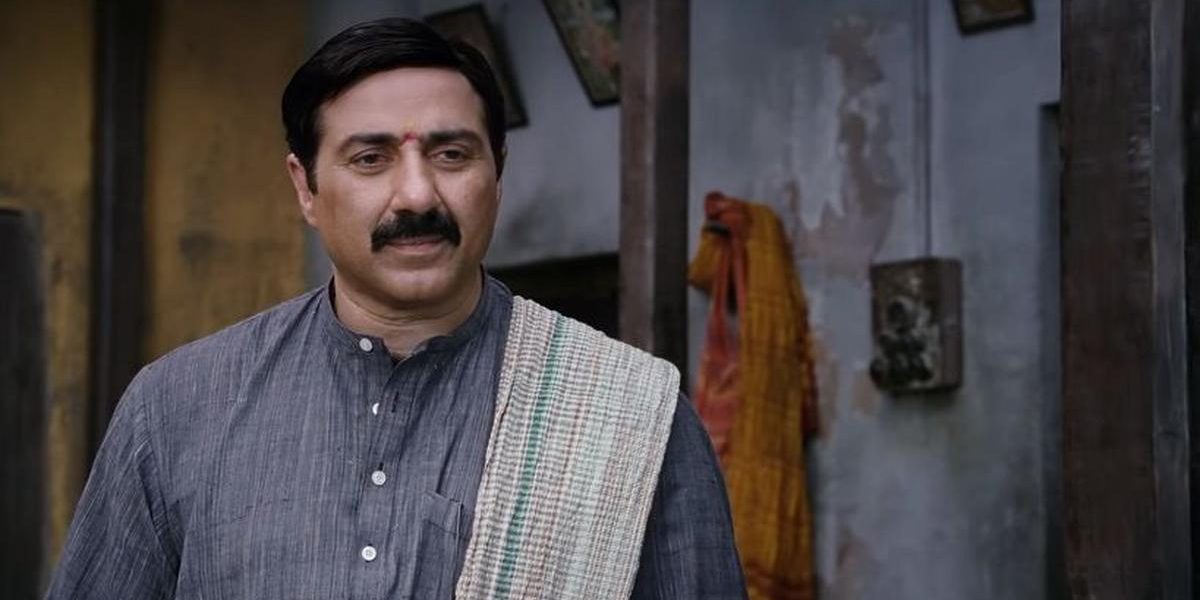 A still from 'Mohalla Assi'.

The poster of Mohalla Assi, directed by Chandraprakash Dwivedi, paints a curious picture. It has a middle-aged man wearing a dhoti-kurta, standing on a Varanasi ghat. A jhola hangs from his left hand; his right hand holds a holy urn. That man, Dharmanath Pandey (Sunny Deol), is looking out in the distance – his face crisscrossed with worry and confusion.

The film tells us why. He’s on the verge of losing everything: his livelihood, his ideals, his dignity. In nearly every film, you’d sympathise. More so because he is played by Deol, an actor usually cast as a hero.

But what if I told you that Dharmanath, a Brahmin, doesn’t want his neighbours to rent their houses to foreigners and people of lower castes (“Mlechas”); that he supports the Ram Janmabhoomi movement; and that he berates his children for learning how to use computers (he considers Sanskrit more important)?

Who is Dharmanath now – a man lost in a world he doesn’t understand, or a litany of labels: casteist, Islamophobic and narrow-minded? If he were on Twitter, we’d have called him a bhakt. But among the many piercing questions that Mohalla Assi asks, one is this: What is the true measure of a person – only his worst traits and moments? Or the qualities that uplift him in other ways?

In a world where every person is a court in themselves, making judgements and moving on, Mohalla Assi asks us to stay and observe – and, if possible, to understand.

Based on the 2004 Hindi novel Kashi Ka Assi, by Kashinath Singh, Mohalla Assi opens in the Varanasi of 1988, a town itching to be a city. Its air has stale ambition and active discontent, religious chants and marijuana smoke. We see pontificating pandits and curious hangers-on, lost foreigners and eager frauds, and no one is too busy for a cup of chai.

In this melee is Kanni (Ravi Kishan), a charming tourist guide born and bred in Varanasi, who speaks English with an American twang, pronouncing Ram and Laxman as “Ram-a” and “Laxman-a”. Then there’s Dharmanath, a priest and a part-time Sanskrit teacher, rigidly set in his ways; Savitri (Sakshi Tanwar), his wife, who is always fighting with him, and a motley bunch with varied political leanings, who meet at a local tea shop, discussing their countrymen gone astray.

Mohalla Assi and Kashi Ka Assi are striking for their sweep of time, and the ways in which they’re uncomfortably relevant even today. Consider this: the novel was published in 2004; the film was made in 2012 (it ran into delays), detailing events from 1988, 1990 and 1998. Yet an early scene makes it feel like the film was written yesterday.

At the start of Mohalla Assi, the patrons of the chai shop are discussing a “Kavi Sammelan (poets’ meet)” stalled by the BJP, because the party considered it vulgar. Yesterday, the Airport Authority of India, succumbing to pressure by right-wing activists, cancelled T.M. Krishna’s concert scheduled to held in Delhi this month. The Varanasi of 1988 isn’t too different from the Delhi of 2018.

This isn’t the only instance where the film seems prescient. Take, for example, the scene where Kanni, accompanying a foreign tourist, asks a sage to define India. He replies, “Atma vishwarit” – disconnected from its roots. “How will it be in ten years?” she asks. “Market,” he says, and then adds, “India will think less, speak more.” In another scene, a character says, “The history of this country will be written by foreigners,” shortly followed by Savitri saying, “That day isn’t far when we’ll bottle and sell clean air.”

Mohalla Assi enters several difficult terrains and owns them easily. One of them is profanity – the characters swear with relish and regularity – which, in an unusual way, seems to be dismantling the linguistic caste system and asking us to ponder the meanings of propriety, and the intricate ways in which they’re linked to perceptions of ‘Indian culture’. In the caste-riven by-lanes of Varanasi, obscenity is the only unifying force. Here a priest says “chutiya” with as much fervour as anyone else.

Not everything in the film matches up to its writing, though (the taut screenplay and wonderful dialogues, both by Dwivedi, are remarkable for their restraint and flavour). The acting often assumes the theatrical aesthetics of melodramatic soap operas. Deol, whose casting is both unusual and bold, sinks into his character, but he too struggles at times to nail a challenging role.

The supporting actors (Mukesh Tiwari, Rajendra Gupta, Mithilesh Chaturvedi), led by Kishan, turn in more memorable performances. The cinematography, by Vijay Kumar Arora, is equally impressive. The principal camera here – often receding or approaching the characters from above or below – is as restless as Varanasi itself, ably placing them in a world falling apart.

But Mohalla Assi reserves its utmost complexity and empathy, kindness and scorn, for its central character, Dharmanath. The film presents him unadorned – his casteist, Hindutva views are seen in the same light as his fondness for his family and faith.

Dharmanath is a shape-shifting creature: He’s polite yet prejudiced; he scolds his daughter but also accepts her wish; he is adamant but knows when to yield. The movie, in turn, dignifies his humanity. It doesn’t deify or demonise him.

Neither does this film, with its quiet progressive politics, divide its other characters into camps. In Mohalla Assi, people don’t follow a dictum – a staunch critic of sectarian politics in 1988 becomes a Vajpayee supporter ten years later; Savitra contradicts herself frequently – which points towards the malleable nature of individual politics, often eluding op-ed pieces and quick zoom-in reportage. The film respects the healing powers of religion; it’s not trying to set an agenda.

For someone who hasn’t read Kashi Ka Assi, the movie nevertheless reminded me of two books. One, Temptations of the West (2006) by Pankaj Mishra, the first chapter of which, coincidentally set in 1988 Varanasi, has a character whose desperation and fear mirror Dharmanath’s. Forced into early penury by the land reform act of 1951, Rajesh, a Brahmin, has become an unfortunate abstraction: someone whose caste privilege cannot secure him either political dominance or financial stability.

Dharmanath is, similarly, a man defeated by time, losing to (western) modernity and globalisation – someone who can only hold on to his house by being its caretaker.

Then there’s V.S. Naipaul’s A Bend in the River (1979), the first line of which underlines Dharmanath’s anxiety: “The world is what it is; men who are nothing, who allow themselves to become nothing, have no place in it.”

A man who has long built sandcastles in a storm, Dharmanath has begun to look at houses of concrete.