Laal Singh Chaddha: A ‘Phipty-Phipty’ Approach to Crucial – and Controversial – Points in History

Aamir Khan sometimes falls into his familiar clichés, but when he gets to the grip of the character, he shines. A still from 'Laal Singh Chaddha'.

The 1994 drama Forrest Gump, now adapted into a Bollywood film, Laal Singh Chaddha, was marked by a fascinating dichotomy: an apolitical protagonist (Tom Hanks) driving a political movie, a paean to conservative America. Its Indian version in 2022 furthers that duality: How do you adapt a political film in a country that, besides a few exceptions, doesn’t allow political films? The Aamir Khan-starrer chooses, to borrow a phrase from actor Johnny Walker, a “phipty-phipty” approach.

The movie opens to Laal Singh Chaddha (Khan), in present day, telling his story to fellow passengers on a train. It then cuts to his childhood, in a village in Punjab, after the Emergency. As Khan’s voice runs in the background, a young Laal (Ahmad Ibn Umar) grows alongside a young country, both witnessing and influencing its events. Director Advait Chandan and screenwriter Atul Kulkarni propel the movie through striking choices. By making a Sikh man the centre of their film, they intend to tell the story of a marginalised India, a wounded India. It devotes 40-odd minutes, around one-fourth of the total runtime, on the boy, shunning any hurry to bring in the superstar.

This portion is crafted with enough care and lyricism. In 1983, Laal proposes marriage to his friend, Rupa, who gets distracted by the sounds of crackers – celebrating the country’s World Cup win – leaving him alone with his question. India wins; Laal loses. Next year, when militancy strikes Punjab, his mother (Mona Singh) likens it to “malaria”, ordering him to not leave home. It’s followed by the murder of Indira Gandhi, sparking a communal riot that traps Laal and his mother in Delhi.

It’s preceded by a charming comedic bit, where Laal teaches Shahrukh Khan (playing himself) his signature, iconic pose – a hat-doff to the Tom Hanks movie where Forrest inspired Elvis Presley. These choices are sharp, recognising the original and embracing the local. The “life is like a box of chocolates” line, too, gets an appropriate desi twist (life is like a “golgappa” in the Bollywood version – it may satiate the stomach but not the heart).

And then Laal grows up. The year is 1990; he and Rupa (Kareena Kapoor Khan) are Delhi University students. The movie takes a sharp turn from here due to two broad reasons: a) Khan enters the film for the first time in its chronological sweep, and b) it starts taking a “phipty-phipty” approach. A clueless Laal sees the Ram Rath Yatra. The film doesn’t dwell on it, except for Rupa telling him that it’s helmed by L.K. Advani. The Mandal Commission protests are similarly rushed through the college walls graffiti. Unlike Forrest Gump, where an aware movie featured an unaware character – especially in such incidents as the Stand in the Schoolhouse Door, slyly rebuking segregation – Laal Singh Chaddha’s continued silence on India’s communal and caste-based polarisation reeks of indifference and ignorance.

We then see the Babri Masjid demolition and the Bombay bombings. Real-life footage in both cases, yes, but nothing much beyond them. The supporting characters, who provided context in the American movie, contribute nothing here, except for his mother repeating the “malaria” line. This is Wikipediafication of real-life events – a sloppiness so common that I noted it in the review of Rocketry, which released less than six weeks ago – more interested in checking boxes than creating meanings.

Then there’s Khan. An impressive actor with a versatile filmography, he sometimes gets ‘stuck’ in a mode that lasts the entire movie. There’s a pensive Khan (Dhobi Ghat), an eye-dilating Khan (3 Idiots), a stunned-eye Khan (PK), and so on. It may have looked bearable initially, but it’s been a shtick for so long – reminding people of Rowan Atkinson’s comedy – that it now feels like a ‘Bean there done that’ saga.

The Laal of the ’90s, playing a student and a soldier, is not an improvement. Rehashing his formula in 3 Idiots, PK, and Dhoom 3 (the dim-witted version), the actor tries so hard to be cute and goofy that he dilutes a crucial portion of the film. Worse, the age difference between the actor and his character swings from two-and-a-half to three-and-a-half decades – it’s not just sloppy but embarrassing.

The writing regains its purpose and momentum through a long Kargil War stretch featuring a twist missing in the original. Unlike Forrest, who rescues his boss, Laal saves a… Pakistani fighter, Mohammad (Manav Vij). Everything about this sequence – the story, the theme, the character motivation – sings. Laal doesn’t know that Mohammad is an enemy; he sees a fellow human in peril and, in auto-pilot mode, saving one Indian soldier after the other, does his duty. They meet later – Laal, a war hero; Mohammad, on a wheelchair, hiding in an enemy state – and bond, eventually becoming business partners.

Laal calls him “Mohammad paaji”. Initially hostile, even wanting to kill Laal, Mohammad warms up to him, adopting the uncluttered mindset of his saviour: that they are both people. They complement each other – vicious and naïve, cynical and sweet – giving the film its most entertaining moments and a much-needed moral spine. It even has a great kicker. When Mohammad feels guilty after the 2008 Mumbai attacks, he asks Laal why he does not pray often. A simple answer: “Mazhab se malaria phailta hai [religion spreads disease].” It’s a stunning scene – a rare scene – where this film feels something, says something. 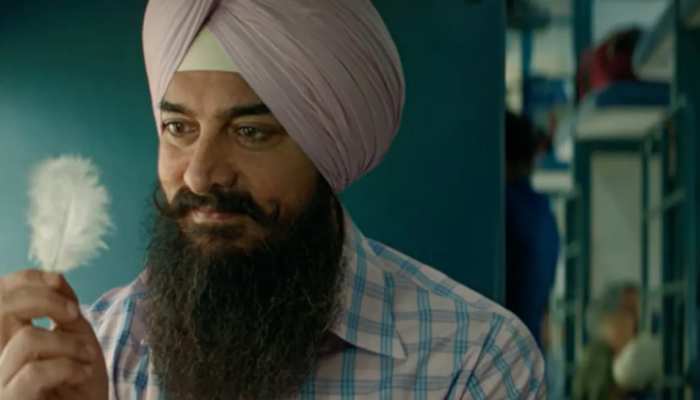 A still from ‘Laal Singh Chaddha’.

Stranded between middling and good, Laal Singh Chaddha is a strange movie. Just when you think that it’s swinging one way or the other, either mediocre or accomplished, it pops up a surprise. Khan’s performance, for instance, considerably improves in the second half (helped by a long beard covering his face and the 47-year-old character inching close to the actor’s real age). And yet, the performance eventually falls short, as Laal’s evolution, unlike Hank’s, doesn’t feel as grand as the movie. The inclusion of the 2008 Mumbai attacks works, but there are no real-life incidents from 1999 to 2007. Even the ones after 2008, at best, check a list: the anti-corruption movement; an “abki baar, Modi sarkar” billboard near the Varanasi ghats; a “Swachh Bharat Abhiyan” board on a railway platform.

These references look even more random because, unlike Forrest Gump, Laal Singh Chaddha lacks a central thesis. An Army veteran opening a successful business venture made perfect sense in the Hanks movie because, in most American imaginations, capitalism is patriotism. It doesn’t translate as smoothly in the Indian context. Here too, Laal opens a business. It fails to fire for a long time, taking off only when he changes the name of the company. The new name is a masterstroke – appropriately Indian and charming (I won’t reveal it here, for you must find out yourself) – but makes little sense in the world of hard business. Laal just changes the name and, that’s it, the company is a huge success. A good adaptation doesn’t just transport plot points; it translates their meanings, where this movie fumbles.

Also read: ‘Wedding Season’: What Could Have Been a Humdrum Romcom Is a Heartwarming Romance

Laal Singh Chaddha suffers from these problems, because it hasn’t resolved the meaning of India itself – and the different fundamental ways in which the country has changed over the last eight years. Such a film would have of course not passed the censors; in such a case, the makers should have tried a different approach (or a source material). Because in its current form, beyond a point, the juxtaposition of the person and the country simply does not work. At times, it’s contradictory, especially for a film vocal about the “malaria” of “mazhab” in every decade – the ’80s, the ’90s, and the aughts – except the last. Towards the end in fact, when the country recedes in the background, Laal looks like a disconnected ghost, unwittingly complementing the persona of his long-distance runner.

Borrowing the Walker phrase, Ramachandra Guha called India a “phipty-phipty” democracy in India After Gandhi. But as Laal Singh Chaddha becomes more and more politically inert – choosing some events and ignoring many – a different line comes to mind. It’s fittingly from a film that, challenging the status quo, perhaps wouldn’t even have been conceived today: “Thoda khao, thoda phenko.”