'Kadvi Hawa' Tries Hard, But Fails Its Cause

The director is so taken by art-house aesthetics – long scenes shot in single takes, uninterrupted stretches of silence – that they seem indulgent, reducing the movie’s emotional heft. 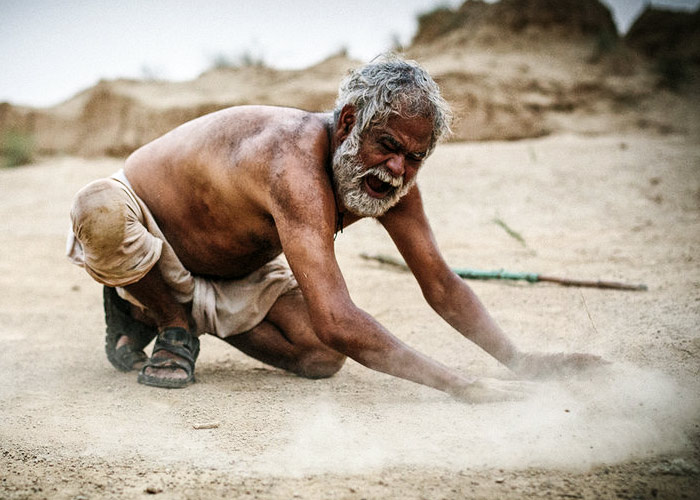 Nila Madhab Panda’s Kadvi Hawa opens to an old man (Sanjay Mishra) walking up a rocky incline. He is grunting and huffing and stumbling. The camera shakes and lurches, as unsteady as the man himself. As his frame comes into view, we see him holding a stick. He’s blind and alone, in a tract of land that is dry and desolate. This opening image – of a man about to get swallowed by nature – befits the film’s stated theme: the perils of climate change. We know nothing about him. We know nothing about his anguish. We know nothing about the setting either. But Panda knows how to set a mood without a word of dialogue.

We learn that the elderly man, Hedu, has had a loan hounding his family for decades. It hasn’t rained in his village, in Rajasthan, in a long time, so his son Mukund (Bhupesh Singh) is forced to find employment as a construction worker in a nearby town. His granddaughter Kuhu (Ekta Sawant) is still in school. His daughter-in-law Parvati (Tillotama Shome), veiled in her house, can’t earn. Then there’s Gunu Babu (Ranvir Shorey), a debt collector in a local bank, whom the villagers call “Yamdoot”. Panda provides necessary information about the characters but doesn’t build on it. There are random scenes aplenty – of Hedu bonding with his granddaughter, his disagreements with the family, his altercations with Gunu – that don’t pin down the stakes of the story. Panda devotes a lot of screen time to underscore Hedu’s despair but fails to answer, “Why should we care?” The film plods along, uncertain of its purpose.

Panda is so taken by art-house aesthetics – long scenes shot in single takes, uninterrupted stretches of silence – that they seem indulgent, reducing the movie’s emotional heft. There’s nothing wrong with a slow film. But Kadvi Hawa’s initial problem is that its listless pace makes us restless for the wrong reasons.

Mishra and Shome’s performances are good, but Shorey’s Gunu, hailing from a village in Odisha, struggles to nail the diction and mannerisms, and overcompensates in the process. Sawant’s Kuhu, needlessly cute, is a Hindi cinema stereotype. Even the theme of climate change seems shoehorned in. Hedu, while taking to his granddaughter, keeps slipping into mournful monologues on dry winds, which signal impending doom. It doesn’t work. Panda is trailing a theme to reach a story, when it should have been the other way around.

Kadvi Hawa could have been tedious if not for its second half. We finally understand what will propel this story: a covert deal between Gunu and Hedu. As the two men start meeting, they develop an unlikely bond, and we see them not as characters but as people, with insecurities and desires. Gunu wants to earn quick money, so that he can live with his family. Hedu wants to repay the loan. It killed his father; it could kill his son.

Gunu calls Hedu “Chacha-ji”, but their relationship is filial, laced with gentle humour and latent tenderness. Kadvi Hawa is impressive here because Panda sets aside his activism in favour of telling a story. Because of that, the film’s motif comes to life with full force, not as a concept but as something material that disrupts and destroys lives. Here Panda achieves what he could have earlier in the film: giving a potential calamity a personality.

At its climax, the film resorts to abrupt plot transitions that strive hard to underline its thesis. Just when you’d have liked the story to continue, to confront its uncomfortable sides, the screen blacks out, followed by statistics on suicides due to climate change. These numbers don’t lie and we must pay heed to them, but there’s a world of difference between what is real and what feels true. Good stories don’t change the world, but they help us make sense of it and see it in new light. Panda is indifferent to the wonders of a well-told story, which is why he fails his ‘cause’.