“There is no event planned with Mr. Agnihotri from our side, nor are we aware of any official visit to the museum,” the museum told The Wire in an email. New Delhi: The Jewish Museum in Berlin has denied filmmaker Vivek Agnihotri’s claim that it has planned an event to “spread awareness about the problems of Genocide & Terrorism and how Indic Principles of Humanity” can solve it.

Agnihotri, who is the director of The Kashmir Files, tweeted on May 26 about a ‘Humanity Tour’ which would take him and his producer-actor wife Pallavi Joshi across multiple locations abroad, including the Museum, for a month.

Off to a month long #HumanityTour of Europe to spread awareness about the problems of Genocide & Terrorism and how Indic Principles of Humanity can solve this biggest threat of the modern world. pic.twitter.com/dluKQbi99f

However, when The Wire reached out to the Press Office of the Jewish Museum (Stiftung Jüdisches Museum Berlin) for confirmation on the event, they said no event has been planned with the filmmaker from their side.

“There is no event planned with Mr. Agnihotri from our side, nor are we aware of any official visit to the museum,” it said over an email.

According to Agnihotri’s tweet, the ‘Humanity Tour’ was scheduled to take place from May 28 to June 26, 2022. It was expected to be held across the United Kingdom, Germany and Netherlands, including Nehru Centre London, Fitzwilliam College Cambridge University, Oxford University, Leicester University, Birmingham Community, Parliament Of UK, Babylon Theatre Berlin, Community Meet Berlin, Salzachlieder Frankfurt and Global Human Rights Defence, among other places. 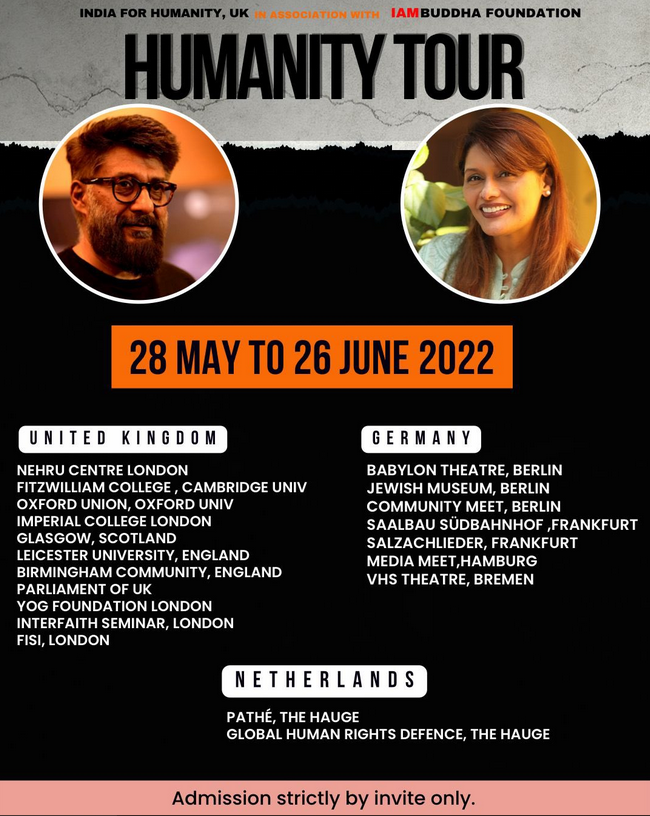 This is the second event on Agnihotri’s tour which has failed to take place, the first being at the Oxford Union in Oxford University.

On May 31, the event was “postponed” by the Oxford Union – the student-run debating society at Oxford University. Agnihotri subsequently issued a video message threatening to file a lawsuit against the Union. The event was rescheduled to July 1.

Also read: As a Film, ‘The Kashmir Files’ Is Both Laughable and Frightening in Its Relentless Communalism

“It was all confirmed via emails, but just a few hours before they said, ‘Sorry we made a mistake, there was a double-booking and we cannot host you today.’ And without even asking me, they changed the date to July 1, when no student would be there, and there is no point in doing an event,” he said in a video, referring to the action as “Hinduphobic” and slamming the university for “the oppression of the minority” of Hindus.

IMPORTANT:
Yet another Hindu voice is curbed at HINDUPHOBIC @OxfordUnion.

They have cancelled me. In reality, they cancelled Hindu Genocide & Hindu students who are a minority at Oxford Univ. The president elect is a Paksitani.
Pl share & support me in this most difficult fight. pic.twitter.com/4mGqwjNmoB

This is a commercial booking and is not hosted by Fitzwilliam College nor the University of Cambridge.

The Wire sent a text to Agnihotri on Saturday, June 18 seeking a comment on the Jewish Museum’s denial. The story will be updated if/when he responds.

Prior to the tour, a press conference scheduled at the Foreign Correspondents’ Club (FCC) in Delhi was also cancelled abruptly.

Also read: PM Modi Should Step in and ‘Stop This Poison From Spreading’: Naseeruddin Shah

The film was banned in Singapore, with Singaporean authorities saying, “The film will be refused classification for its provocative and one-sided portrayal of Muslims and the depictions of Hindus being persecuted in the on-going conflict in Kashmir.”

The city-state said that under its film classification guidelines, “any material that is denigrating to racial or religious communities in Singapore” will be refused classification.

The Kashmir Files was briefly banned in the United Arab Emirates. The UAE authorities, however, reversed their ban decision at the end of March and the film was released without cuts from April 7. New Zealand had to raise the film’s rating from R16 to R18 after concerns were raised by the Muslim community, The Times of India reported.

Agnihotri has alleged an “international political conspiracy” against him and lashed out against Wikipedia, a free Internet-based encyclopaedia, for describing the film as “…presents a fictional storyline centered around an exodus of Kashmiri Hindus” and that it “depicts the early 1990s exodus to be a genocide, a notion that is considered to be widely inaccurate and associated with conspiracy theories.”

The film has grossed over Rs 300 crore at the international box office, and received a tax subsidy in several Indian states like Haryana, Gujarat, Madhya Pradesh, Karnataka, Goa, Tripura, Uttar Pradesh and Uttarakhand. It was also actively promoted by the ruling Bharatiya Janata Party (BJP), with Prime Minister Narendra Modi himself endorsing the movie. At least two states, Madhya Pradesh and Assam, announced time off from work for government employees to go and watch the film.

The BJP’s Amit Malviya, who is in charge of the information and technology cell, also tweeted in its favour, urging people to go watch it.

This is the kind of raw emotion The Kashmir Files invokes. Those who have suffered the horrific genocide need healing. This movie is their story. It has to be heard. Go out and watch the movie as it releases in theatres today. Best wishes to ⁦@vivekagnihotri⁩ and team… pic.twitter.com/DFB72VRPJh

During the film’s screening in theatres, many young men made hate speeches against Muslims and called for violence.

The Wire’s investigation showed that several of these ‘spontaneous’ calls for violence were made by those with a history of fomenting anti-Muslim violence. Some had been previously arrested in connection with the Jantar Mantar hate speech case of August 2021, an event organised by BJP leader Ashwini Upadhyay.

A leader of the far-right Hindu Army, Sushil Tiwari, who was arrested in the Jantar Mantar hate speech case, can be seen in a video warning Hindus after watching the movie in Lucknow. “If Hindus don’t wake up even now, what happened 30 years ago in Kashmir will be repeated 15 years later in the whole country,” he says.

Another man, Deepak Singh Hindu, also had an altercation with the police following hate speech made after the film at the cinema – Hindu has not only previously been arrested in connection in the Jantar Mantar case but had also called for a ‘religious war’ on the first day of the Delhi Riots of 2020 at its epicentre.