Jean-Luc Godard and the Incoherence of Modern Life

In this tribute to the master of modern French cinema, Manash Firaq Bhattacharjee focuses on two films – 'Breathless' and 'My Life to Live' – to capture a defining preoccupation. 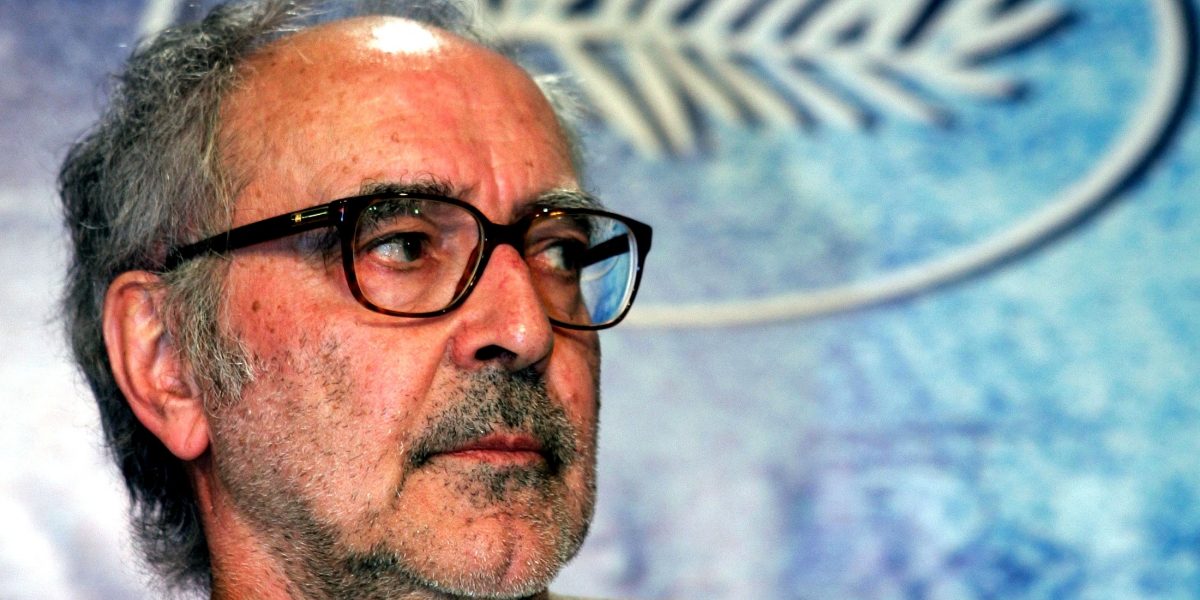 When the pandemic-lockdown descended like an invisible iron curtain on our lives in late March 2020, I took to three things simultaneously, in earnest: writing, cooking and cinema. I started by watching Jean-Luc Godard’s films: Breathless, My Life to Live, Masculin Féminin, A Married Woman, Weekend, and Alphaville. I wanted to end the embarrassment of not having watched Godard’s famous films earlier, after I got put off by the abstract style in his 2001 film, In Praise of Love.

In this tribute to the master of modern French cinema, I would focus on two of his films, Breathless and My Life to Live, to capture a defining preoccupation that I discovered in his films.

In the 1960 classic, Breathless, where Godard announced himself in world cinema, the American actress, Jean Seberg, also makes her flamboyant and memorable debut as Patricia, an aspiring journalist who lives alone and sells the New York Herald Tribune in the streets of Paris. Her short-lived romance with the young criminal, Michel, who fashions himself like the Americana actor, Humphrey Bogart, is a metaphor of the times they lived in. The postwar uncertainties of de Gaulle’s France were evident in the economic sphere that reflected on people’s lives. There was nervous energy and excitement in the air. The lures of capitalism and the risky charms of individual life fed off each other. It was a time of craze and creativity, a time to realise the frisky sources of the self, and the fleeting music of love. Godard’s camera captures the dilemmas and dreams of those times through the two characters with infectious energy. There is a moment in the conversation between Patricia and Michel in her small apartment room, which is illuminating:

As Michel tries to undress Patricia, she quotes the last sentence from Faulkner’s The Wild Palms: “Between grief and nothing, I will take grief.”

The conversation is riddled with deception, as Patricia looks for meaning, but not Michel. Patricia rebuffs his claim to understand her mind. Modernity is obsessed with the mind. The mystery of character is sought to be uncovered by knowing the mind. The claim to know the mind is propelled by the desire to control. Patricia understands love as a terrifying condition because she knows it is impossible to control someone. She suggests that one must resist the temptation to love if one has to remain independent. Lack of certainty, or even momentary clarity, is a fundamental condition of modernity. Desire has to live by a radical uncertainty, and a possible lack of meaning. Love is dangerous because it seeks certainty and a semblance of clarity. It is a profound predicament that ails modern life.

Patricia’s sudden confession about her desire to be a writer, and the quote from Faulkner, changes the tone of the conversation. It introduces a mysterious quality to Patricia’s character. She lives two worlds. One is the world of her independent life and its reckless choices, where she befriends a man about whom she knows next to nothing. The other is her life of reading where she finds clues to herself. Faulkner knows her more than her lover.

There is a suggestion of depth in Patricia which is missing in Michel. But the conditions of life have thrown Patricia into the mercy of chance encounters where it is difficult to find what she may be looking for. She may not even know what she is looking for. The world of capitalist modernity is such that the absence of meaning is crowded with meanings. Between grief and nothing, between meaning and non-meaning, Patricia will choose the former. Grief here is not an existential fact of life, something that is inevitable. Grief is the only source that offers meaning to the world where everything disappears before you know it. Meaning takes time to appear, in other words, meaning is time. A still from ‘Breathless’. Photo: Screengrab

Modernity, as the French poet of the 19th century, Charles Baudelaire told us in his 1863 essay, ‘On the Painter of Modern Life’, is “the transient, the fleeting”. It is a description of time and life, where speed is the norm. Modernity is the time of breathlessness. Time is out of breath, and so is meaning.

Breathless announces Godard’s desire to probe the nature and language of love in postwar Europe. It prefigures the sexual revolution of the late 60s. This probe is part of a cinematic preoccupation that is political and includes Godard’s lifelong engagement with the cultural ills of capitalism. The element of speed however is not merely a problem with capitalism alone. It is part of the scientific and technological innovations of modern life. Godard grapples with a new aesthetics to capture the speedy nature of the world. It makes him introduce the famous jump cut in cinema. Jump cuts are an artificial device to create an unsteady connection between space and time. The creation of jerky visuals disturbs the frame of vision which is disorienting. It comes close to the way surrealists imagined the nature of time through a play of the unconscious, and which corresponds to the uncanny nature of our subjective experience. If cinema is an art of disbelief (or, the suspension of belief) that paradoxically offers us a glimpse of reality, this paradox must reflect in the craft.

Godard’s 1962 film, Vivre sa vie (My Life to Live, or It’s My Life), has had a lasting impact on my mind for a number of reasons. The actress, Anna Karina’s performance in the film is breathtaking, a word that loses its depth in commercial cinema. She plays Nana, a woman forced by circumstances to choose the life of a sex worker after leaving a marriage in the hope of becoming an actress.

Nana’s assertion of her independence and individuality does not get jeopardised by accident. The gateways to freedom that modernity promises are ridden with dangers that are structural in nature. There is a nexus between social, or civil, morality and the law that creates circumstances where Nana finds herself selling her body for money. Godard’s matter-of-factly voice in the background (like reading from a newspaper report) informs us about the legal issues and aesthetic grid pertaining to a sex worker’s job. There are laws in sex work that are not just legal but gestural. The sex worker is expected to obey the rules without her individuality coming in the way of her professional identity. The body becomes a conduit through which money changes hands in a brutally instrumental economy of exchange.

Nana’s predicament is way more constricting than Patricia’s. She is trapped in a world due to her economic condition that conditions her choices. In an unforgettable scene, Nana breaks into a dance with bewitching abandon around a billiard table, trying to catch a man’s attention, while her pimp, Raoul, sitting in the background is secretly selling her off to another pimp.

Later, in a memorable conversation with a philosopher in a café, Nana tells him,

“I know what I want to say. I think first about whether they’re the right words. But when the moment comes to speak, I can’t say it.”

In response, the philosopher narrates a story by the French writer, Alexandre Dumas, where a man, Porthos, faces a moment of indecision while planting a bomb and is crushed to death. Nana shows her irritation at being told such an agonising story. Then she tells the philosopher,

“Why must one always talk? I think one should often just keep quiet, live in silence. The more one talks, the less the words mean.” She says further, “Words should express just what one wants to say. Do they betray us? … Why do we have to… understand each other?” The philosopher argues that it takes time (in abstinence) to learn to speak well. He says,

“So to live speaking, one must pass through the death of life without speaking.”

Nana asks, “What do you think about love?” As the philosopher tries to explain through Leibniz and German philosophy, Nana interrupts him, “Shouldn’t love be the only truth?”

Nana is lost in an incomprehensible world of meanings. She is no longer sure of what words mean if they don’t mean what they are supposed to, in other words, if they don’t mean the truth. The gap between language and truth bothers and bewilders her. What is missing for her in this false transaction between words and truth, is love. Nana suspects it is the absence of love that divorces language from truth. Nana’s quest for truth is not some philosophical, abstract truth that the philosopher seems to explain to her, but rather, truthfulness, the act of meaning what you say. Godard is intrigued by the nature of language in modernity. He is keen on how people speak, and wants to probe the nature of speech. Cinema is about speech, not writing. Nana understands the philosopher more than he understands her because she lives the everyday, structural deceptions of speech. The philosopher is caught in abstractions. But life, Godard seems to tell us, is the best yardstick to measure language (and ideas). 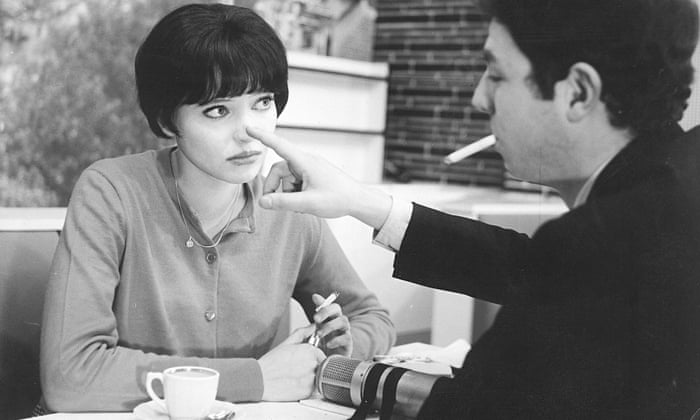 In a hotel room sometime later, Nana spends time with a young man who reads her out from Edgar Allan Poe’s The Oval Portrait. She falls in love with him, and wants to quit her profession. It is perhaps not so much the exact nature of the text he reads out to her that arouses her emotions, but the fact that he found her worthy of reading out from the book. He shares his ideal world with her that came from reading and literature. It is this gesture that establishes a sense of romance in her heart.  The haunting background score of the film by Michel Legrand brilliantly accompanies the intensely quiet grief that chases Nana throughout the story.

In both these films, Godard paints memorable women characters who brave the odds to uphold what they hold precious: their vulnerability. In a world where time and language are in a hurry and meaning is difficult to decipher from the anarchy of modern experience, Patricia and Nana make difficult choices and live up to them. There are no guarantees in life except living it. Godard’s films, with their technical innovations and aesthetic idiosyncrasies, are a testament to our difficult lives.

Manash Firaq Bhattacharjee is the author of Nehru and the Spirit of India (Penguin Viking, 2022), The Town Slowly Empties: On Life and Culture during Lockdown(Copper Coin, 2021), and Looking for the Nation: Towards Another Idea of India (Speaking Tiger, 2018).