This is not the cinema of one-upmanship or settling scores. It’s a muted sentiment of the marginalised that can be summarised in a line – “This is how it feels.” 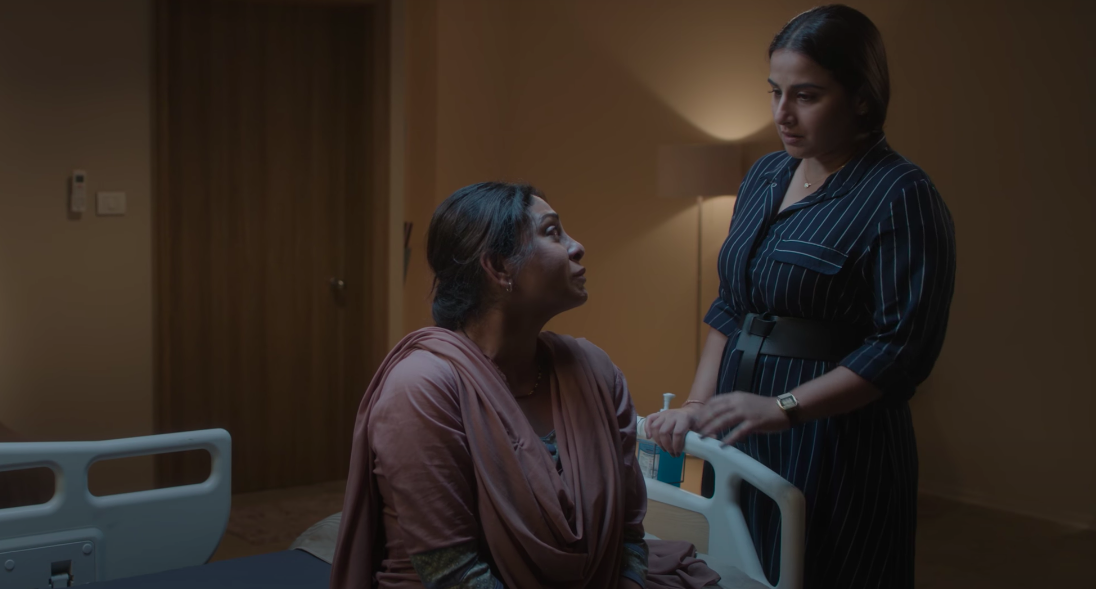 Vidya Balan and Shefali Shah in a still from 'Jalsa'.

The first 20 minutes of Jalsa, streaming on Amazon Prime, opens to three stories.

Maya Menon (Vidya Balan), a famous journalist, grills a retired judge on camera; he gets miffed, like You Know Who, and aborts the interview. A cook, Ruksana (Shefali Shah), banters with Maya’s differently abled son, Ayush (Surya Kasibhatla). Expressing his fondness, he calls her ‘Ruks’. Ruksana’s 18-year-old daughter, Alia (Kashish Rizwan), loiters with her male friend on an overbridge at three in the night.


We obviously know that these stories will intersect but not how. This concise segment opens this world and elevates our intrigue: an idealist boss, an affectionate worker, two families on the opposite ends of class spectrum — what more can they have in common?

At the end of the 22nd minute, Maya’s car runs over Alia.

She was dozing off while driving; Alia had suddenly appeared. This is where Jalsa starts to twist and turn, like a knife in a flesh, and its characters bleed. What does Maya do, someone who takes evident pride in holding others accountable? She flees.

Thankfully, Alia survives. Maya puts her up in a posh hospital. She’s wrecked by fear and confusion and guilt. Maybe she’s not such a bad person? Maybe it was a mistake-on-a-mistake? 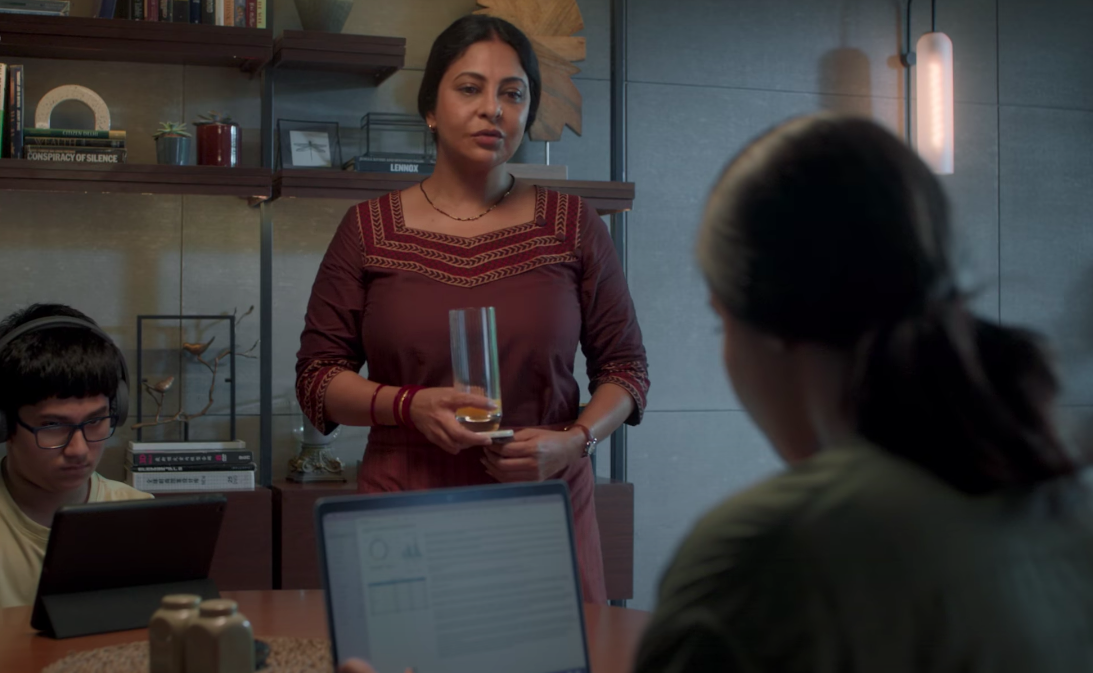 Shefali Shah in a still from ‘Jalsa.’

Then there’s Ruksana. No matter where she goes – the cops, her husband, her friend – the question remains the same: “What was Alia doing so late in the night?” She knows, like we do, that the true crime here is something else: being poor.

Much of moviemaking rests on orienting, or ‘directing’, audiences’ perceptions. Cast a big enough name, with a sanitised screen image, and we will side with her – it’s the cinematic counterpart of ‘manufacturing consent’. So, it’s not tough to empathise with Balan’s Maya, an actor so assured that her yawns can make us move.

Some recent history also plays a part: Over the last one-and-a-half decades, many Hindi films (and web series) have gone the hinterland route in pursuit of realism. Countering simplistic and escapist depictions, they feature impressive direction and performances, brimming with a genuine curiosity to unravel the new country. But barring some exceptions, they too reinforce a stereotype: that the Indian small towns – populated by poor, unlettered, and eccentric characters – breed ‘evil’. The status quo is still unshaken: rich, noble; poor, criminal. Vidya Balan in a still from ‘Jalsa’.

Then there’s Jalsa. If there’s Balan on the one end, then there’s Shah on the other (a fairly popular actor, if not a star, who ‘deserves’ empathy). If Maya’s relationship with her cook becomes transactional after the accident, then Ruksana and Ayush’s bond, devoid of any financial compass, improves.

If Maya wants to settle this case (no matter what it takes), then Ruksana is willing to bend the rules, prodding More and Poddar to increase their bribe. This yin-yang also informs the tone: It’s too slow to be a thriller; it’s too plot-focused to be ‘deep’.

Even the storytelling: every stretch of assured filmmaking is accompanied by several questions. Some obvious (is Maya really that cruel – is the film aware of her cruelty? What are the odds that in a city as big as Mumbai, three people – Alia, Maya, and the cops – happened to be on the same road on the same night at the same time, especially when two of them knew each other?

Why does an otherwise credible character, Rohini, a Malayalee, speak in such an affected Hindi accent – and looks mopey all the time?) Some are not so obvious (is the film conflicted about its genre? What is the ultimate question here? What will happen even if the characters know each other’s secrets?). Vidhatri Bandi in a still from ‘Jalsa’.

I wrestled with them for a long time. It, finally, started to make sense in the last 20 minutes.

Bit by bit, scene by scene, many of my confusions got resolved (though the angle of the local politician completing the accident subplot was still a huge stretch). It hit me then: that the biggest puzzle, the biggest mystery, here is the nature of the movie itself.

If the characters are trying to trick each other, then the film is trying to trick us – and not in a smug sloppy way. Because underneath all the thriller-like elements – the disclosure of Maya’s identity, her attempts to come out clean, Rohini closing in on her role model – lies a story of two women, of class divide.

Two worlds that are not supposed to meet – and they hardly meet. Quite literally.

Like many, I was looking forward to Balan and Shah sharing screen time, two terrific actors who have not been in the same film before. But Jalsa treats this casting coup by separating them as much as possible.

Before the climactic moment, Balan and Shah have just two proper scenes (one at the 44th minute, the other at the 97th minute – the latter, where Maya lashes out at Ruksana in a weird manifestation of her guilt, is superb).

This deliberate separation produces a Hannibal Lecter-like effect from The Silence of the Lambs (Anthony Hopkins appears on screen for less than 17 minutes yet it feels like he’s present throughout). Similarly, I could imagine Shah’s reaction when Balan was alone (and vice-versa).

This approach befits the story, because any filmy possibility – such as a charged monologue, fiery dialogues, a guilt-inducing confrontation – would have negated the vast chasm of class divide that the film seeks to probe. 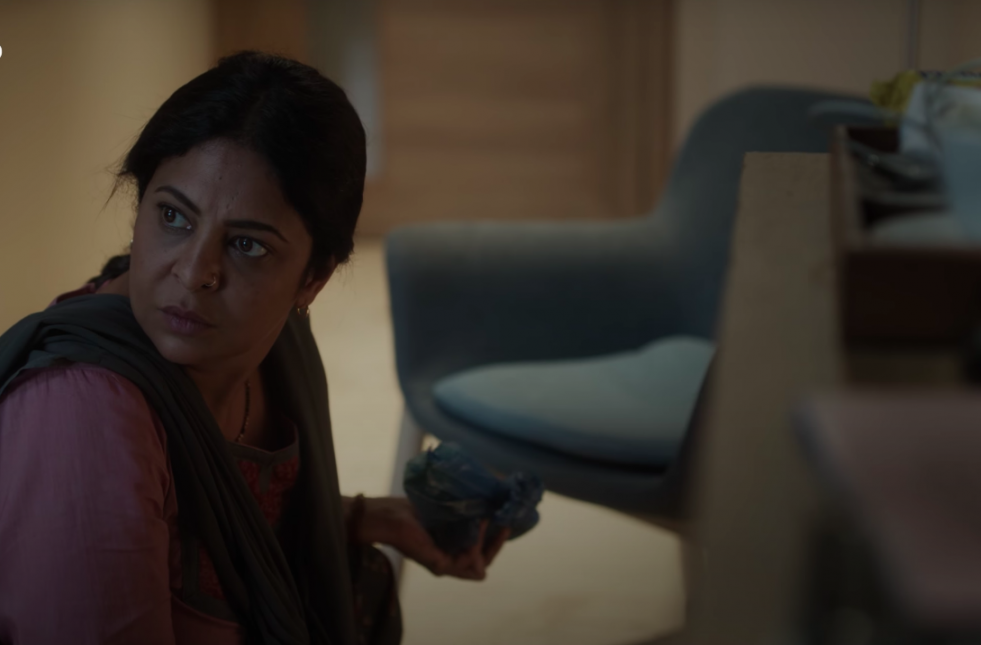 Shefali Shah in a still from ‘Jalsa’.

Many makers might have gone the other way, but director Suresh Triveni and writer Prajwal Chandrashekar choose a method that feels both socially and cinematically appropriate.

Jalsa does a great job of withholding crucial information. We discover important facets of the characters just at the right time, through crisp backstories delivered in a line or two. Quite late in the movie, we find out that Maya’s father was an Army man – something that contextualises her idealism further.

Alia had gotten drawn, perhaps addicted, to making online reels, a rare opportunity to squash class divide in modern India, something that consumed her life.

There’s even some hint that Maya divorced her husband (Manav Kaul) because Ayush was “weird”. Triveni is no fence-sitter, either. Maya’s family (which includes her mother, Rukmini, played by Rohini Hattangady), like many liberal units, is typically sweet and polite to Ruksana. But the moment she asserts herself – the moment there’s a tiny bit of anger induced by class consciousness – the mask falls off. Seeing her cook angry, Rukmini says, “We’ve done so much for you.”

This is solid, motivated filmmaking. But Triveni reserves his finest chops for the last few minutes when we anticipate Maya and Ruksana’s eventual conversation. It again doesn’t play out as expected.

In fact, nothing much happens on the surface – and that’s the beauty of this film. Nobody has won here because nobody can win.

This is not the cinema of one-upmanship or settling scores. It’s a muted sentiment of the marginalised that can be summarised in a line – five small words – something Bollywood filmmakers hardly care for, as it doesn’t concern them: “This is how it feels.”

It takes a special skill to convey your point and yet not belittle the other person, more so when you understand who they are and where they come from. Life isn’t a tennis match; it’s possible for two people to be in the same arena, and it’s possible that none of them lose.