Use of the language by song writers and singers has become casual and full of errors.

'Ek pal ka jeena', the biggest hit of the 'Kaho Naa...Pyaar Hai' album, became an anthem of sorts, off-target enunciation of words like KHaali, KHaas and KHushi notwithstanding. 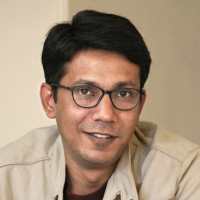 When Gulzar provided the lyrics of Goli maar bhejey mein, none of the unit members of the under-production Satya (1998) liked it much. They preferred the dummy lines that composer Vishal Bhardwaj had written: Gham ke neeche bum laga ke gham uda de. Communicating this to the senior lyricist fell upon writer Anurag Kashyap, the rookie in the team. Gulzar listened to him and retorted, “Pehle GHam to bolna seekho,” and sent him packing.

A writer and a filmmaker, Kashyap should ideally know the intricacies of the language he’s working with. But it’s not incumbent on him because the onus of delivering the lines lies elsewhere.

This luxury can’t be availed by the playback singers. By the looks of it, the present-day ones don’t consider it necessary either. Incorrect pronunciation of Urdu words is rampant in Hindi film songs and it tends to blemish many a good effort.

Till around the 1980s, save for occasional slip-up, this wasn’t much of a concern. The slide began in the 1990s, with a noticeable lack of attention towards phonetic norms. There were no turnarounds in the new millennium, which began on an ominous note. The songs of Kaho Naa… Pyar Hai (2000) burnt up the charts and contributed in no small measure to the huge success of the film. ‘Ek pal ka jeena’, the biggest hit of the album, became an anthem of sorts, off-target enunciation of words like KHaali, KHaas and KHushi notwithstanding.

The downward trend continued over the years and it’s come to a point where the errors have not only become acceptable but the singers seem to be oblivious to them as well. A layman getting it wrong may not be a big deal, but if a professional singer fumbles in the basics of a language that he/she sings in, it’s not an encouraging sign. Inadvertent, one-off lapses can be overlooked, but nowadays singers repeat the same mistakes in numerous songs.

It must be mentioned here that sometimes the script necessitates deliberate mispronunciation to ensure that the songs are in sync with the speech traits of the characters, as in Gunga Jumna (1961) and Lagaan (2001). However, such motivations are few and far between and most of the glitches lack rationale.

The Hindi film song, which has served the cause of Urdu by keeping it alive among the masses when the language was faced with institutional apathy, finds itself at a crossroads. While the primary language employed by lyricists continues to be an Urdu-heavy Hindustani, a sizeable chunk of singers is not well-versed in it. A little attention to details and placement of the nuqta (when written and read in Devanagari) can help get things right.

Not all the yesteryear greats were born into Urdu-speaking households – in fact, save for Suraiya, Talat Mahmood and, to some degree, Mukesh, one can’t think of other big names from the 1950s, popularly called the Golden Age of Hindi film music, in this regard. The rest polished their articulation skills as part of their learning process.

A singer like Manna Dey would always be on a firm footing, thanks to his training in classical music under gurus like Ustad Aman Ali Khan, Ustad Abdul Rahman Khan and Ustad Ghulam Mustafa Khan. Jaddanbai was present at the studio when ‘Aayega aanewala’ (Mahal) was being recorded and later complimented Lata Mangeshkar on her impeccable rendering of the word baGHair. The prowess didn’t come easy – Mangeshkar had rigorously learnt the subtleties by hiring an Urdu tutor. In Nasreen Munni Kabir’s book Lata Mangeshkar: In Her Own Voice, the singer states, “When I speak, my Urdu isn’t good, but when I sing I make sure there are no flaws in my diction.” Asha Bhosle echoes the sentiment in a 2003 interview with Rediff: “Every Hindi singer needs to learn the nuances of the Urdu language.”

It is worth noting that the language itself is in no danger and continues to be widely spoken in the Hindustani-speaking parts of the country. It’s the script that has diminished and this has contributed to the decline in correct diction. In the old days, Urdu was part of mainstream education and hence the sounds were inculcated in speech right from one’s childhood. Mohammed Rafi and Shamshad Begum had roots in Punjab, where Urdu was the standard medium of learning; earlier singers like K.L. Saigal and Noor Jehan built their careers upon similar foundations.

Phonetics is accorded great importance in Urdu. For example, the ‘z’ sound is written and pronounced in four different ways. Therefore, not knowing the script will invariably lead to mistakes. Perhaps this is the reason behind a few slips in some of Kishore Kumar’s songs.

Peripheral factors also come into play. Unlike the bygone era in which someone like Naushad would be particular about grammar and pronunciation, contemporary composers aren’t so punctilious. Nor are the lyricists. There are times when even the vocabulary gets distorted. ‘Tu hi yaar mera’ from last year’s Pati Patni aur Woh uses a non-existent word called jazbaaton (jazbaat is the plural of jazba – it can’t be pluralised further). And, in addition to jazbaaton, both ‘Labon ko’ (Bhool Bhulaiyaa) and ‘Bakhuda tumhi ho’ (Kismat Konnection) contain another howler – lamhaaton. Then there’s ‘Tu mere alfaazon ki tarah’ from Rocky Handsome (2016) that commits a similar gaffe with alfaazon and, curiously, turns common words like guzre and gunguna into GHuzre and GHunGHuna.

The filmmakers ought to shoulder some responsibility too. Speaking to Frontline in 2013, Gulzar said the new filmmakers “do not know much Hindi, and they know no Urdu. They usually speak in English, write in English […] Personally speaking, I make sure that any word I have written for a song is pronounced just the right way. I attend the recordings of all my songs.”

There’s no dearth of new songs where everyday Urdu words are mispronounced. Most of it happens with three letters of the Urdu alphabet that require the epiglottis’ use – qaaf, KHay and GHain. To pick just one of these – the qaaf – would give us umpteen commonly used words that are often pronounced incorrectly in film songs: Qasam, Haqeeqat, Qaatil, Iqraar, Qadam, Qissa, Taqdeer, Qaraar/Beqaraar, Mulaqaat, Qareeb, and the ubiquitous Ishq/Aashiq/Aashiqi. It’s almost become a norm to hear the ‘q’ sound as ‘k’.

Giving examples for all the three letters in question would need much space. So, let’s stick to the qaaf here.

‘Phir le aaya dil’ from Barfi (2012) is one of the better songs of contemporary times. The composition, singing, lyrics – it ticks all the right boxes, except one. Two out of the three versions of the song are marred by patchy pronunciation of the qaaf sound. So qubool becomes kubool, qismat becomes kismat, and baaqi – which recurs frequently – becomes baaki. Another occurrence of baaki in a popular song can be found in ‘Ab to aadat si hai’ in Kalyug (2005).

The less said about remixes, the better. The pronunciation errors are inexplicable. The singers have a clear reference in the form of the original song and yet many manage to bungle it. A popular reworking of Kishore Kumar’s evergreen classic ‘Mere mehboob qayamat hogi’ (Mr. X in Bombay) has notched up over 87 million views on YouTube at the time of writing. Upon hearing it, Anand Bakshi’s lyrics ring true in an unintended way – to repeatedly hear kayamat is a qayamat alright.

There’s a catch in it as well. Sometimes a singer does the reverse and introduces a guttural sound in a word where it isn’t required. For instance, kaenaat is turned into qaenaat in ‘Main agar kahoon’ from Om Shanti Om (2007). To be fair to the singer, Sonu Nigam, this is a stray mistake on his part.

The problem is manifested in other ways too. Film titles routinely come up with inaccurate spellings, thereby reinforcing the prevalent fallacies. The older films are equally culpable in this respect. Karz, Kanoon, Yakeen, Kasoor, Kudrat, Ilaaka, Kurbaan, Keemat, Bewakoofiyan, Kaabil – the list can go on. Prolonged misuse can be damaging – words like qismat and qasam are nearly always written with a ‘k’ now.

At the crux is the fact that a vast majority of today’s audience is unfamiliar with the precise delivery of Urdu words and hence the mistakes mostly go unchecked. This again is because of the removal of Urdu from mainstream education, leading to a progressive decrease in people’s awareness. Given this, the pronunciation of unknown terms is generally shaped by way of what one gets to hear (and read). Cinema, with its tremendous reach and impact, plays a considerable role in influencing this understanding.

Aesthetics aside, erroneous talaffuz is fraught with other perils. Someone should inform the budding singers who sing ‘Mere rashk-e-qamar’ as ‘Mere rashk-e-kamar’ in competitions on television shows that they end up transforming ‘envy of the moon’ into ‘envy of the waist’.

Nuktacheen hai gham-e-dil, but for a good reason – the nuqta is important.

Yasir Abbasi is an independent cinematographer and a keen follower of the history of Hindi cinema. He is the author of the book Yeh Un Dinoñ Ki Baat Hai: Urdu Memoirs of Cinema Legends (Bloomsbury, 2018).