HBO's 'Chernobyl': The Brainchild of Russiagate

Many of Chernobyl’s glowing reviews seem to confuse the show’s goriness for truthfulness. Photo: HBO

The five-part HBO dramatic series Chernobyl arrives shortly after several nonfiction books about the 1986 nuclear disaster in Ukraine, which resulted in the permanent evacuation of more than a quarter million people, the deaths of about fifty, and the shortened lives, due to long-term illnesses, of approximately four-thousand. The disaster undermined citizens’ faith in the Soviet Union and helped bring about its collapse. This renewed interest in Chernobyl makes sense at a time when our present society also faces political instability and environmental catastrophe on an even larger scale.

Unfortunately, Chernobyl isn’t the show this event deserves. Many of Chernobyl’s glowing reviews seem to confuse the show’s goriness for truthfulness. The show is, in fact, the least truthful when it is the most explicit. A Forbes magazine article convincingly details how the show spectacularly misrepresents the effects of radiation poisoning. The New York Times also heavily criticises Chernobyl for its “cheap theatrics”.

But Chernobyl’s shock value isn’t the only thing driving interest in the show. Its politics are at the centre of the commentariat’s obsession with the miniseries. As series writer Craig Mazin wrote on Twitter: “The lesson [of Chernobyl] is that lying, arrogance and suppression of criticism is dangerous. The flaws that led to Chernobyl are the same flaws shown by climate change deniers today.”

On its face, this is a message that should appeal to the Left. But in its substance, Chernobyl is limited to this moralistic, personalised critique of power. It’s a political vision stemming from the Russiagate investigation, which sees the flaws of the Trump administration as rooted not in the class forces that existed before it, and which will exist afterward, but in the sinister machinations of a few bad elites. It’s this worldview that leads Chernobyl to disastrous historical distortions — which conveniently serve to discredit not just the far right, but its historical socialist opponents.

Mazin — a writer known for his work on comedy movies like The Hangover, Part II — came to prominence on Twitter in 2016 for tweets criticising Ted Cruz, who was his roommate in his freshman year at Princeton. Since then, Mazin’s Twitter has been consistently political in the strident tone of the #Resistance.

Mazin has shown special verve for dissecting the president’s ties to Russia as investigated by the Mueller report. Many wishing to see the last of Trump are understandably invested in the Russiagate narrative. Yet the report’s summary has confirmed no evidence of collusion with Russia in the 2016 election by the president or his associates. Neither could it confirm the more extravagant claims theorised by the media and social media alike, including that the president is a Russian operative working at the behest of Putin.

Many elements of the Russiagate story should, at this point, be seen as a conspiracy theory. Mazin, meanwhile, has gone above and beyond the mainstream version of the narrative, tweeting and retweeting comments intended to link Bernie Sanders with malicious Russian influence.

As psychologists have found, conspiracy theories tend to tempt people who feel vulnerable and politically disempowered. Those who identify with the political centre may be having such a moment now, with a resurgent ethno-nationalism on the Right, as well as an increasingly popular socialism on the Left.

Russiagate has served as a useful cure-all to dismiss, in one sweeping gesture, the claims of both the political Right and Left. The narrative promised a return to the status quo of previous decades once Putin’s malignant foreign influence was exposed and rooted out. Meanwhile, the intrigue’s anti-Russian tropes, so evocative of the Cold War, proved resonant to voters of a certain age.

As Richard Hofstadter argues in his foundational book, The Paranoid Style in American Politics (1964), the enemy in a conspiracy theory is an “amoral superman” who is not only malicious, but also supremely powerful in his ability to influence the world. Russian strongman leader Vladimir Putin played this role in Russiagate despite that country’s loss of power and status over the last three decades. The “good guy” in conspiracy theories is, similarly, a storybook hero, a role Robert Mueller played. This required no small amount of liberal whitewashing of the former FBI director who developed a program many see as designed to entrap Muslim men.

Conspiracy theories share much with simplistic Hollywood narratives that rely on dehumanising character types. As Hofstadter underlines, “Unlike the rest of us, the enemy [in a conspiracy theory] is not caught in the toils of the vast mechanism of history.” It’s the loss of history in Chernobyl which reveals the show’s flirtation with present — and past — American conspiracy theories.

“A stroke of pure fantasy”

Chernobyl makes its hero a man named Valery Legasov, who was, in reality, a high-level official in the Russian nuclear program. Legasov was well-known in the West because he provided a lengthy account of the Chernobyl disaster at the conference of the International Atomic Energy Agency in August 1986, a few months after the accident. While his testimony surprised many with its frankness and detail, Legasov was following orders of the Soviet administration. 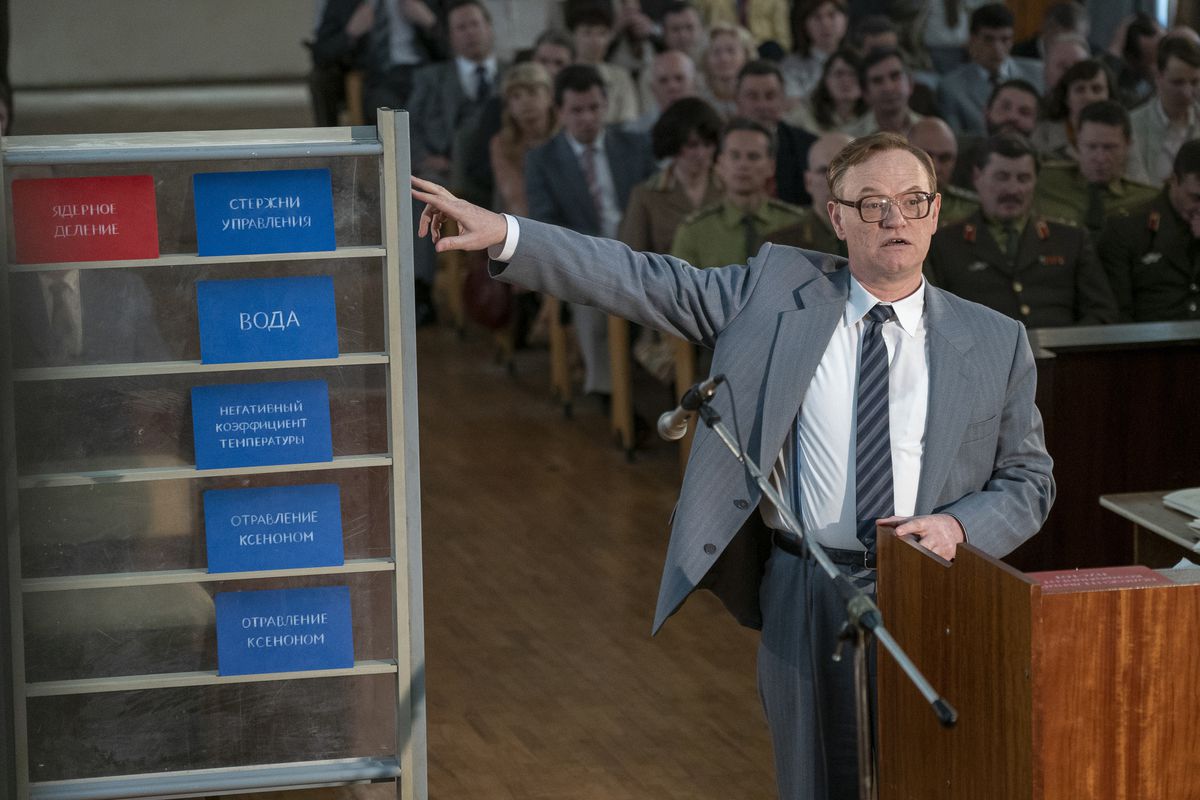 He ultimately hewed to the official party line that blamed the plant operators for the accident, rather than the design and construction of the reactor. Mike Hale’s New York Times review criticises the show’s “stroke of pure fantasy” which puts Legasov on the witness stand during the operators’ trial denouncing the cost cutting and secrecy of the Soviet regime. Chernobyl invents facts to portray Legasov as an upstanding whistleblower resisting an evil administration.

Of course, the show also constructs “bad guys” who are the representatives of that evil administration. In a scene late in the first episode, Soviet officials meet in a dark office to discuss their plan of action about the still unclear nuclear disaster. When a dissenter at the table requests an evacuation of the town, an elderly man, clearly the highest official present, calls the meeting to attention by banging the floor with his cane.

This character is named Zharkov and seems to be a wholesale fictionalisation. With his face deep in shadow, he points to the profile of Lenin on the wall: “Our faith in Soviet socialism will always be rewarded . . .  When people ask questions that are not in their own best interests, they should simply be told to keep their minds on their labour,” he intones in a mellifluous speech, and then under ominous music announces that there will be no evacuation. The room breaks out in earnest applause.

Also read: When Chernobyl’s Radioactive Residues Were Thought to Be in Mumbai’s Butter

If the Red Scare caricatures aren’t enough to discredit this scene, actual history will do the job. According to Harvard historian Sergii Plokhy in History of a Nuclear Catastrophe (2018), this meeting was presided over by the high-ranking minister Anotoly Maiorets. He expressed doubt about the necessity of evacuation while the extent of the accident wasn’t yet clear.

In any case, he was a career bureaucrat who was unwilling to take responsibility for a problem he might be blamed for. In Plokhy’s version, Maiorets made no impassioned speech to “socialist” ideology, which we should probably see as Mazin’s own editorialising on socialism, similar to his Twitter-style grandstanding on Russiagate.

The irony is thick: a show that claims to illustrate the dangers of “lying” and “arrogance” blithely invents historical events to suit its political narrative. While Red Scare tactics have experienced a revival in our political discourse since 2016, Chernobyl is the most high profile return of those themes to a major Hollywood production.

Besides indulging the Russia-phobia of contemporary liberals, Chernobyl also partakes in the long tradition of Hollywood productions about disasters and dystopias that play on societal anxieties to indulge in a spectacle of the world’s destruction. In a much-cited passage, literary theorist Frederic Jameson suggests these productions prove “it is easier to imagine the end of the world than it is to imagine the end of capitalism.”

Chernobyl is an interesting variation on this formula: even as we worry about the ongoing ecological crisis caused by capitalism, Chernobyl revels in the failure of the historical alternative to capitalism. Chernobyl returns to the Soviet Union not in good faith, but to remind those who would break with today’s neoliberal consensus of the failure of its alternative.

In the face of our own ecological crisis and resurgent ethno-nationalism, which have risen out of the problems of our present system, it becomes more difficult by the day to imagine the status quo continuing. But the stagnant political centre, evident in Chernobyl, offers no way out.

Aaron Giovannone is a writer in Calgary, Alberta.